There has been a cinema on the corner of King’s Road and Old Church Street since 1910. This picture shows that part of the King’s Road. You can see the side of the cinema, the Marjorie Parr shop (Parr was a well known Chelsea art dealer) and interestingly what looks like a statue of a woman visible over the top of the van.

Was it something on the back of a vehicle?

The cinema has gone under many names. As the King’s Road Theatre it was the home of the first live version of the Rocky Horror Show. It has been a Ritz, a Curzon, a Classic, a Cannon and an ABC. It was also called the Essoldo when this picture was taken: 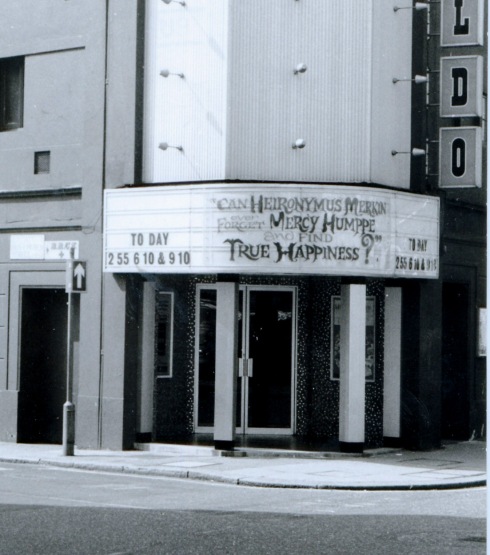 These were the days when cinemas showed one film at a time so there was room on the display board for “Can Hieronymous Merkin ever forget Mercy Humppe and find true happiness?” (1969, a musical featuring Anthony Newley and Joan Collins regarded by some as a work of genius but by most critics of the day as pretentious rubbish)

Moving east we pass Oakley Street. In this image you can see the wall that once marked the edge of the Old Burial Ground. The area was landscaped in the late 1970s.

You soon come to another cinema, the Odeon (Formerly the Gaumont). In 1972 another film with a long title was showing: 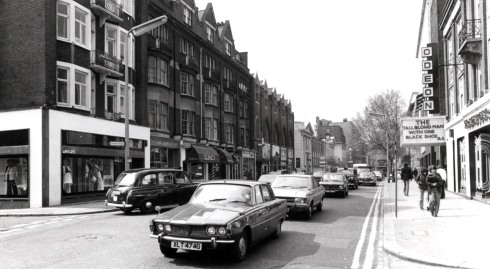 The Tall Blond Man with One Black Shoe (1972, a French comedy thriller about a musician caught up in a spy caper) This view is looking west, the way we came. Turn around to see the view east with the Antiquarius building in its heyday.

And the recently deceased Picasso Café: 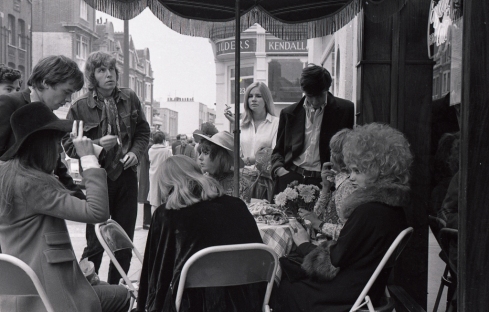 This picture by John Bignell shows a group of typically sixties King’s Road characters hanging out at the Picasso.

(It’s an excellent picture but it has a dark subtext. Claudie Delbarre the woman in the curly wig on the right of the picture was murdered a few days after the picture was taken. I wasn’t sure whether to mention this but the case itself is quite well-known and somehow you can’t look at the picture without thinking of the murder. I can’t anyway.)

On either side of the road there are individual shops rather than branches of famous chains.

And there are famous names among the pubs -the Chelsea Potter and the Chelsea Drug Store.

The Drug Store is one of the King’s Road’s most famous buildings. You can still see the late Victorian superstructure of the upper storeys from when it was known as the White Hart. The flamboyant sixties additions have created a unique building which has been celebrated in songs and in films. (The one which sticks in my mind was that scene in A Clockwork Orange when Alex goes to pick up an album, among other things)

In the final stretch you go past the old fence of the Duke of York’s headquarters. I haven’t commented on the cars but here are a couple of Minis and a sports car I can’t identify. Suggestions?

At the opposite end of the road from last week’s branch, another Woolworth’s:

Near Sloane Square you can see a poster advertising the Daily Telegraph’s coverage of a referendum on the Common Market.

There are still many more pictures in our files. One thing that strikes me about these photographs most of which were taken purely to show what the buildings looked like is how ordinary the street and the people in it look. With the exception of the Bignell picture they seem to show a conventional high street in a big city. I suppose only the inhabitants of this time-zone could tell you how extraordinary the King’s Road was then, compared to the rest of London.

Some things about the King’s Road never change though. I’ve lived in Chelsea since the 80s and at various times I’ve seen Dustin Hoffmann, John Lydon, Michael Caine, David Puttnam, Bob Geldof, even Richard Strange walking in the King’s Road. There’s this double-take moment when you think “isn’t that….?”. John Bignell has captured that exact moment in this picture.

Have you unexpectedly come across a famous person in the King’s Road? And did you just smile to yourself and let them go without a word?

I’ve mentioned the photographer John Bignell but the man who took most of these pictures was our own John Rogers, formerly our staff photographer now working freelance. His work has been invaluable for Local Studies in general and for this blog in particular.

This entry was posted on Wednesday, November 23rd, 2011 at 11:58 pm and tagged with Chelsea, Chelsea Drug Store, John Bignell, King's Road, Photographs, Sammy Davis and posted in 20th Century, Chelsea. You can follow any responses to this entry through the RSS 2.0 feed.
« King’s Road blues – part one
Games for May: the Pageant and the Queen 1908 »