Down by the River: Chelsea Reach in the 1860s 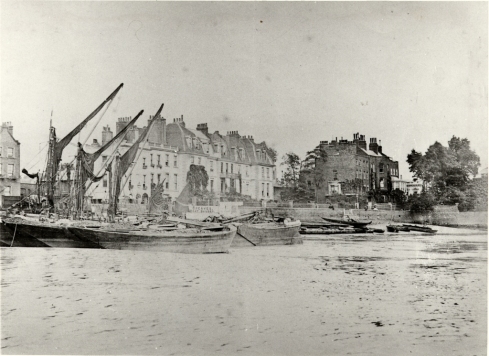 This is Chelsea Reach where today you will see a collection of picturesque houseboats. The boats are a long established Chelsea institution which have braved bad weather and road widening schemes alike but long before they were there the Reach was a place for working boats. Most of the houses in the background are still there but you will no longer see sailing barges resting on the foreshore or the sign on the wall at the centre of the picture.  Don’t strain your eyes trying to read it. Here is a closer view: 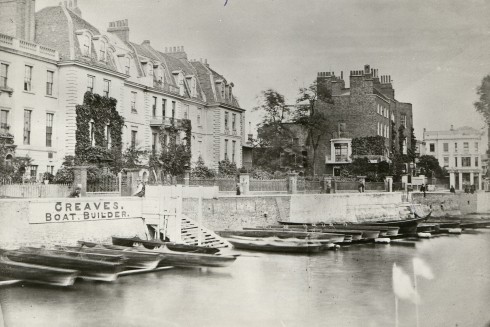 The name of course is Greaves. This is the family business of Walter and Henry Greaves, amateur artists as well as boatmen. The street behind the wall looks calm and prosperous, the passersby are unhurried. This is a quiet residential stretch of the riverside. The tightly packed shops and taverns of Lombard Street/ Duke Street are just out of shot. To the left the road leads to Cremorne Gardens. But no-one is in a hurry to get there this morning. A man sits on the wall. Could that be one of the Greaves brothers themselves keeping a eye on James Hedderly, who has carried all his photographic equipment onto the muddy river bed? We think they were acquainted maybe even friends as fellow tradesmen of Chelsea’s riverside. (Hedderly was a sign writer at this point in his life).

Hedderly took many photographs of this area. Here are some of the barges moored to the west of the Greaves boatyard:

In the background you can see the old Battersea Bridge looking ethereal, although this is probably due to the quality of the photograph rather than weather conditions on the day.

Here a little further down is a pair of coal barges at Lindsey Wharf:

And a close-up of the men working on the barge, pausing to face the photographer and look out at us:

The next picture looks back at the Greaves boatyard from the east :

Just behind the boats to let sign is another for Lindsey Wharf. The boats built and rented out by the Greaves family were mostly rowing boats. The brothers rowed customers out on the river themselves. Some of those trips were purely business, taking passengers to their destinations like river taxis as boatmen on the Thames have done for centuries.  But Chelsea was already a place for artists and some of the passengers were making sketches of what they saw from the river. One of those customers was James McNeill Whistler who would have a profound effect on the lives of the Greaves family. 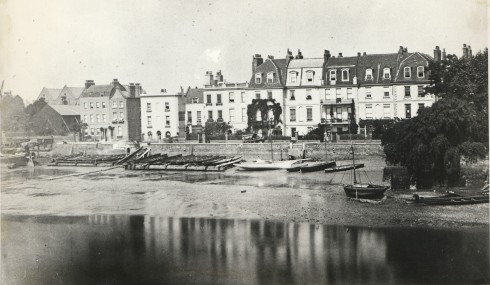 This is a view at low tide probably taken from the bridge, shows what must have been the whole of the Greaves business, the narrow rowing boats sitting on pontoons waiting for customers.

When I started writing this post I intended to take you all the way along Chelsea’s riverside, but we seem to have lingered in one small stretch of water. Perhaps it’s the spell of the river or perhaps post-Christmas languor. Either way we’ll be back here again before too long both with Mr Hedderly and the Greaves family.

I hope you all had a happy Christmas.

This entry was posted on Thursday, December 29th, 2011 at 2:11 pm and tagged with Chelsea, Hedderly, Walter Greaves, Whistler and posted in 19th Century, Chelsea, Hedderly. You can follow any responses to this entry through the RSS 2.0 feed.
« Vickie and Nance’s excellent adventure
Tales of the riverbank: Chelsea before the Embankment »