I am reliably informed that the bus in this picture is an AEC Regent with a Park Royal roofbox body and restricted blinds and that the days when the 73 wheezed along as far as Richmond are now distant memories. My transport correspondent also noticed that there were some odd people crossing the road in front of the bus. Those would be art students I replied.

We sometimes think of the 1950s as those grey days between the war torn 1940s and the mind-expanding 1960s. It’s true that there was a great deal of austerity and conformity in the 50s but there were also great steps forward in fashion, music, theatre, architecture, arts and of course having a good time.

For much of the time art students got on with the business of education. Here are some of them sketching in the open air at Sloane Square: 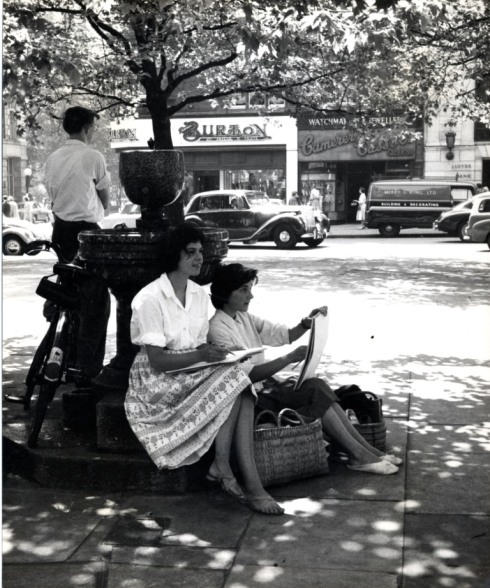 And in Sydney Street:

Even in a studio:

(Apologies to those who might be offended by it for the slight amount of bare flesh in this picture. As it comes from the Central Office of Information this is government-sponsored nudity.)

At other times the art students were just doing what students normally do. Hanging around trying to look cool:

This group are definitely succeeding in looking good in the fifties. But there was other work to be done too such as making big feet:

Not to mention dressing up: 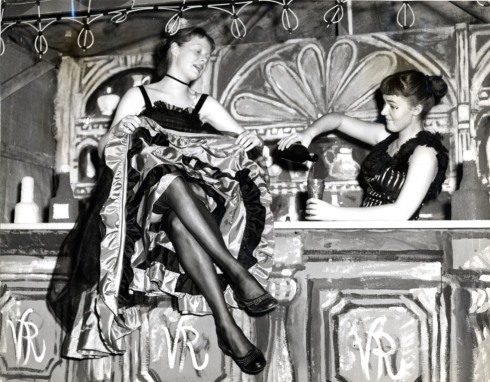 After all that all they had to do was present themselves at the doors of the Albert Hall either on foot:

Or even by car:

Get the big heads on:

And finally have an enormous fancy dress party: 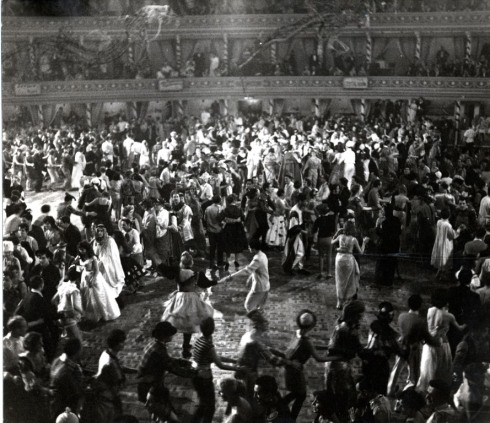 Later on in the 1960s there was an album by the now obscure group Pete Brown’s Piblokto called “Things may come and things may go but the arts school dance goes on forever”. Not quite forever maybe but back in the pleasure seeking fifties it must have seemed like the fun would never end.

The big party was the Chelsea Arts Club Ball. Art students from all over London contributed to this annual event which ran from the early days of the Arts Club in 1908 until 1958 when it finally ceased in that form at least.

If you’ve got your costume ready we can step into the time machine….

Pictures this week came from the former government department the Central Office of Information, the library’s John Bignell collection and the archive of the Chelsea Arts Club.

This entry was posted on Thursday, January 12th, 2012 at 12:01 am and tagged with Chelsea, Chelsea Arts Club Ball, fancy dress party, kensington, photography, sloane square and posted in 20th Century, Chelsea, John Bignell, Kensington. You can follow any responses to this entry through the RSS 2.0 feed.
« Tales of the riverbank: Chelsea before the Embankment
Empty streets: Brompton Road 1902 »

7 responses to “The art school dance”