This picture is one of my favourites from Roger Perry and George Melly’s 1976 book on London graffiti the title of which I have borrowed for this post.

The picture dates from a time before graffiti was a branch of the visual arts. The explosion of spray painting which saw elaborate tagging on every accessible wall and which would give us street murals and fantastic decorations on empty buildings had not yet happened. Graffiti was still a clandestine activity. And some people just left messages. Political messages, campaigning messages and even personal messages like this one: 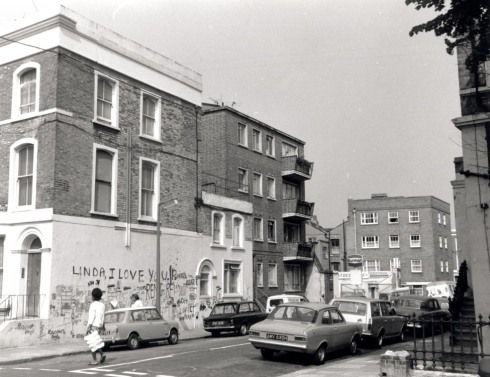 You can’t help wondering even now when it probably no longer matters whether the writer’s love for Linda was unrequited.

Some graffiti then as now was purely political. 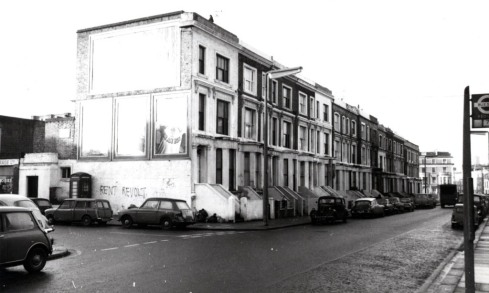 The phrase “rent revolt” epitomises community activism in many parts of London in the 70s. North Kensington, the home of Rachman and others was particularly radical. 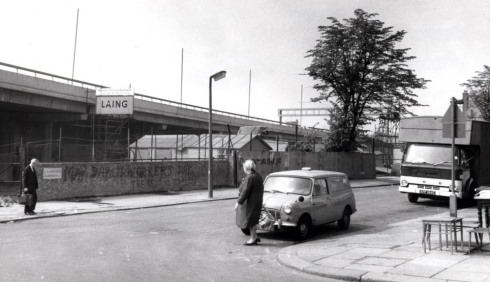 This is Cambridge Gardens in the period when the Westway was being constructed. “May Day is worker’s day” reads the message followed by “The rest is whose?” It’s almost like an exam question. Discuss. The best of this kind of graffiti raises questions, some of them political some of them philosophical, some enigmatic. Like this one, also from Cambridge Gardens:

It’s a kind of social critique. One of the famous pieces of graffiti which you can see over several pages in the Melly book was located on either side of the tube line between Westbourne Park and Ladbroke Grove where it could be read by passengers. The epic message described the repetitive life of the commuter “same thing day after day”, “work-train-sleep” and concluded with the warning “one in ten go mad, one in five cracks up”.

Graffiti attempts to enter the reader’s head like a tune you can’t stop humming. After the politics and the warnings about the dangers of modern life you can also turn to the consolations of literature with this quotation: 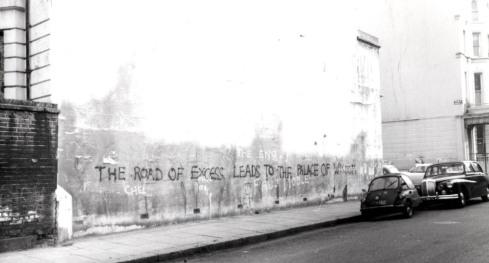 William Blake was a particular favourite of the graffiti artists. This one  in Powis Square “The road of excess leads to the palace of wisdom” was not uncommon. I can also remember seeing another at the entrance to Euston Square station: “The tygers of wrath are wiser than the horses of instruction”. It could also be seen in Basing Street W11. We now have a phrase for the way these messages spread: going viral. Here is a more recent example in Ladbroke Grove:

This one was seen all over London in the 90s. Iain Sinclair refers to it in Lights out for the Territory (page 199 if you want to see for yourself) and wonders if it has some kind of alchemical significance. It’s a little like Christian Rosencrantz, a name from esoteric history. Here it is again in a truncated form on Scrubs Lane (perhaps there was only room for the name?)

No-one seems to be sure what it actually means. There are suggestions it was publicity for a band, but it’s also said that the band came after the messages. It’s also reminiscent of another repeated message from the 70s: “George Davis is innocent”. Does anyone remember that one? If you don’t the quick version is that George Davis was a man who was wrongly convicted of robbery and subsequently freed, although he later served prison sentences for two other robberies. Those convictions were not disputed in graffiti.

Londoners have been expressing themselves in graffiti for centuries. The massages serve every kind of purpose but the best ones are the one which make you stop for a moment and think “what?” Why on earth would someone take the time and trouble to write that? Here is my personal Kensington and Chelsea favourite and this one comes from Chelsea on a wall in the soon to be demolished and intriguingly named Raasay Street. Perhaps it’s the size of the letters and their insistent tone but I find it vaguely threatening. 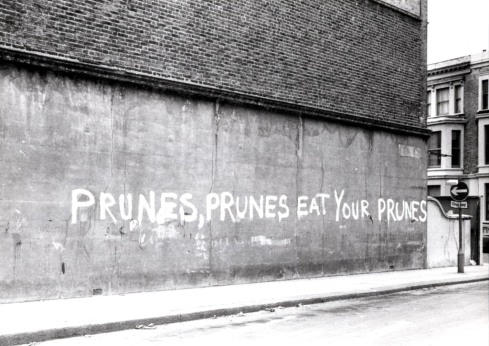 Perhaps it was left by a demented grocer.

If you have any favourites you’d like to share send them to me and I’ll do a follow-up post one of these days. I scoured the photo survey for images of graffiti. Some examples were frustratingly truncated. Some legendary examples such as the slogan Vietgrove were not there when our photographer passed by.

Thanks to Sue Snyder for the Christian Goldman photos. The Writing on the Wall is now unfortunately out of print but well worth it if you can  find a copy.

This entry was posted on Thursday, February 23rd, 2012 at 1:10 am and tagged with Chelsea, Ladbroke Grove, photography and posted in 20th Century, Chelsea, North Kensington. You can follow any responses to this entry through the RSS 2.0 feed.
« Building the Bridge – Chelsea 1936
The case of the missing chimneys: Lots Road Power Station »