Victorian dreamtime – in the walled garden

If you don’t mind me referring you back to previous posts do you remember the post on William Cowen?  (Idle days in southern Kensington – link opposite) One of my favourites from the Cowen collection was the enigmatically titled “Avenue to Cresswell Lodge” with its peaceful looking line of trees, Narnian lamp post and solitary figure. Cresswell Lodge in its time a private house and a school seemed like a mysterious hidden place lost in time. When I wrote the post I didn’t realise that we had one further work by Cowen, not a watercolour but an etching. And honestly I didn’t know that it was a view of Cresswell Lodge. 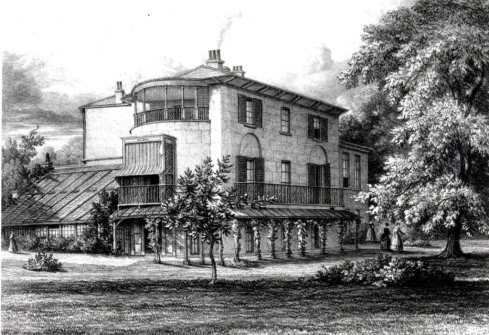 Cresswell Lodge didn’t disappoint me. It’s not an obviously Victorian building, not even obviously 19th century so it has exactly the timeless quality I would have expected, sheltered by trees with a still lawn on which young women go about silent business behind a wall of trees. The notion of a secret garden is deeply embedded in our view of the Victorian era. Look at this view of the Rectory at Chelsea. 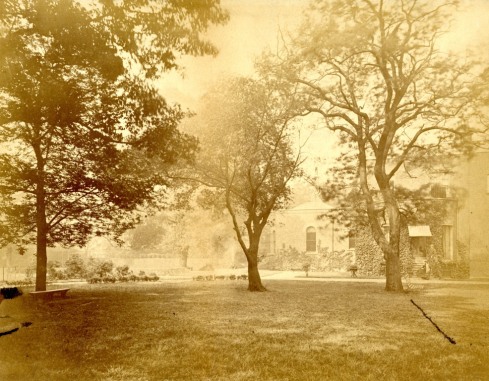 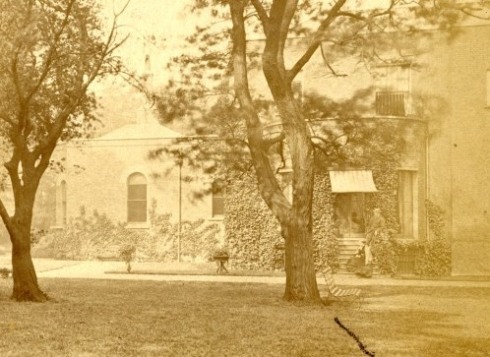 I don’t know who the couple are, or the figure sitting inside. Charles Kingsley, father of the novelist of the same name was the Rector there until his death in 1860. His son didn’t write the Water Babies for another couple of years but he may have conceived it on one of those long afternoons in the rectory garden hiding out from his father’s parishioners. It was one of the largest private gardens in London as you can see below. 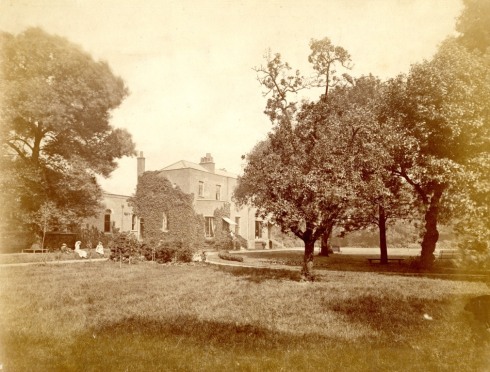 The Water Babies is not much read now. It’s a strange mixture of social concerns about child labour and life after death fantasy. Alasdair Gray used elements of it in his own metaphysical fantasy Lanark.

The next incumbent at the Rectory was the Reverend Gerald Blunt. His son Reginald was also an author, one of the historians of Chelsea, and the founder of the Chelsea Society. An interesting man, but more of him another day.

Not far away from the Rectory was another Chelsea garden where quite a different group of people lived. In contrast with the muscular Christianity at the Rectory Tudor House in Cheyne Walk was where Dante Gabriel Rossetti came to live a few months after the death of Lizzie Siddall. 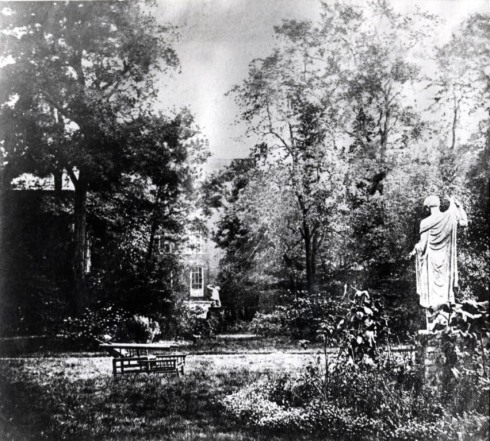 At first he lived there with the novelist George Meredith and the diminutive and erratic poet Algernon Swinburne who was given to frequent bouts of drunkenness and wandering around naked. It’s reminiscent of the strange world depicted in the film Performance in which Mick Jagger played the debauched rock star Turner. Many years later Jagger lived at Tudor House himself.

Rossetti soon had the whole house for himself and his family along with a menagerie which featured amongst others a murderous kangaroo, a raccoon, a wombat, several burrowing  armadillos and a bad tempered white peacock. This photo features only humans. 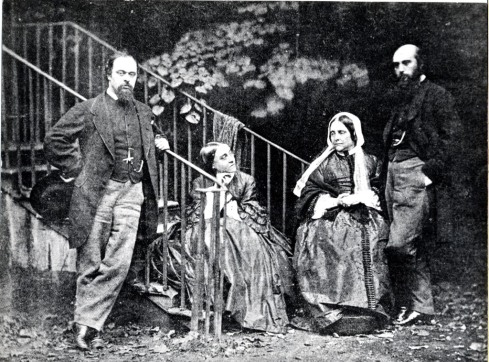 Rossetti, his sister Christina (who wrote another strange and half-forgotten Victorian fantasy the poem Goblin Market), their mother and his brother William who kept an eye on them all. The photographer was apparently fascinated by Rossetti’s wombat and put it into one of his own books as a dormouse. He was Charles Dodgson of course, a talented photographer as well as a writer. Another of his photographs: 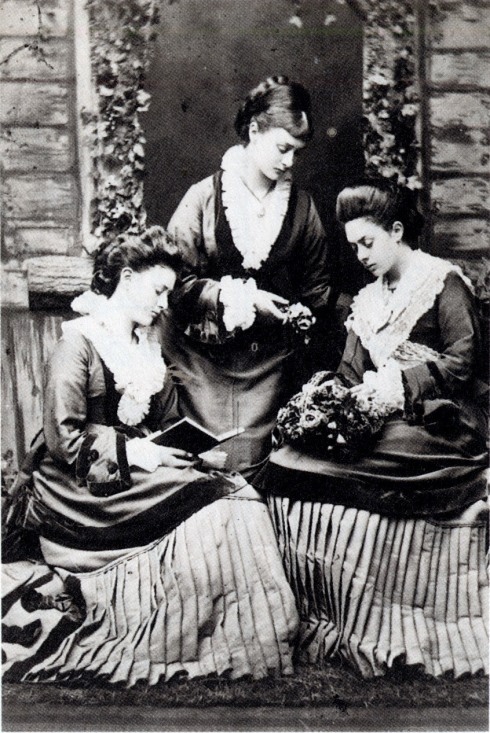 Alice and her sisters. A little older than the views we’re used to seeing.  Still sitting quietly in one of those walled gardens like these two: 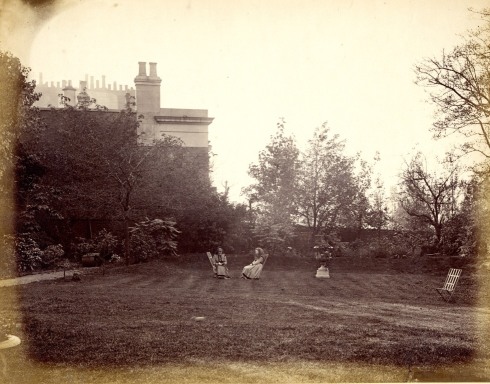 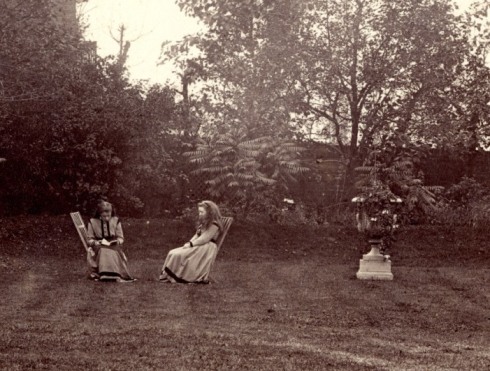 It all looks a little dull.  Perhaps the pleasures of the secret garden were wearing thin by the end of the century. I’ve hopped around Victorian west London to get you from my fantasy of Cresswell Lodge in the 1840s in rural Chelsea to the Kensington of a few decades later. The still walled gardens are now surrounded by the growing noise and motion of urban life. But those strange little sanctuaries endured a while longer. A little further west and south was another quiet garden. 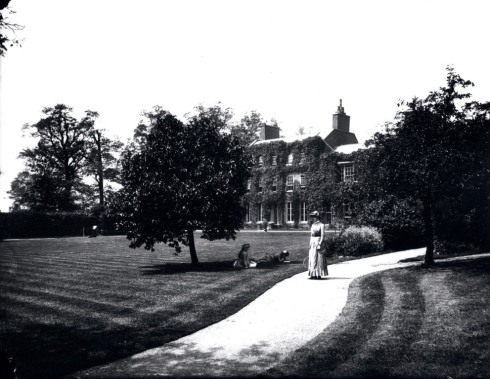 Another of my favourites. Ivy covered walls, a wide lawn. Two young women read in the afternoon light of another endless summer while a third waits disconsolately for someone to break the silence by playing tennis. Anyone?

The final house is Aubrey House, like Cresswell House also in its day both private house and school.

I found the photo of the Liddell sisters in Story of Alice by Christina Bjork.

This entry was posted on Thursday, April 26th, 2012 at 12:08 am and tagged with Aubrey House, Chelsea Rectory, Dante Gabriel Rossetti, Garden Lodge, photography and posted in 19th Century, Chelsea, Kensington. You can follow any responses to this entry through the RSS 2.0 feed.
« Hard times: working in riverside Chelsea
Fancy Dress 1897: the Duchess of Devonshire’s Diamond Jubilee Ball »

6 responses to “Victorian dreamtime – in the walled garden”