After the amazing photographs you’ve seen in the past few weeks, this post is going to seem like something of a shaggy dog story, more about the writing of history than history itself. But bear with me. I’ve had this subject on my list since the beginning of the blog. And for years before that.

Just to set the record straight at the outset here is a photograph of 120 King’s Road taken about 1966. 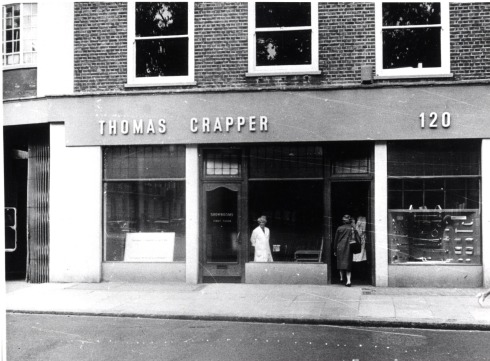 The business closed the following year which might explain why the shop front looks a little minimal. But the Crapper business had a long history in Chelsea. This advertisement is from 1908, but similar ones had been appearing in local newspapers and directories since the 1880s. 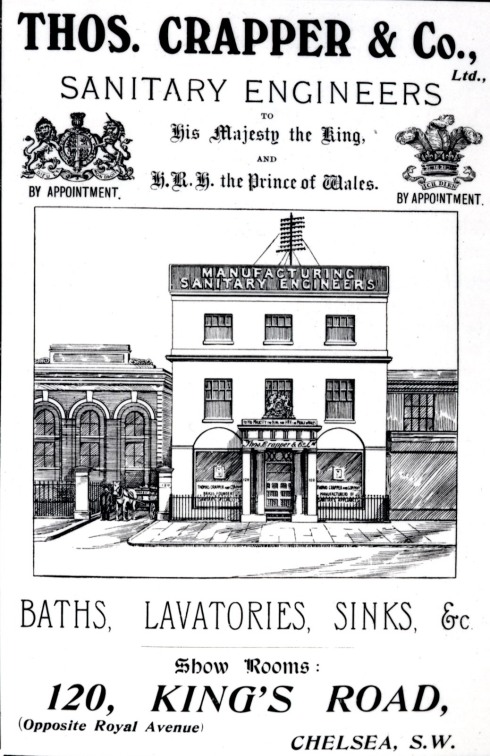 Some of the later adverts featured a photograph of the Marlborough Works as the factory was called. 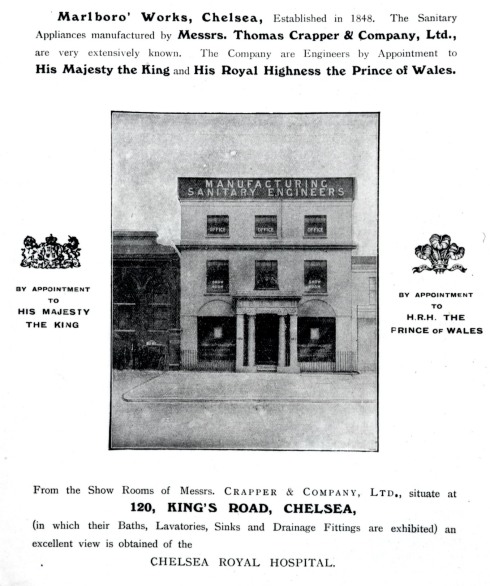 Here are Crapper and some of his team outside the Works. 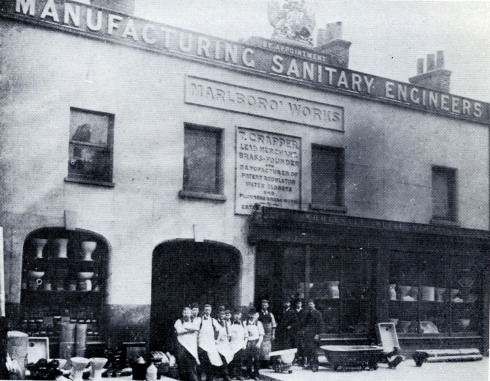 He’s just visible among the three dark-suited men on the right. And here is Mr Crapper himself: 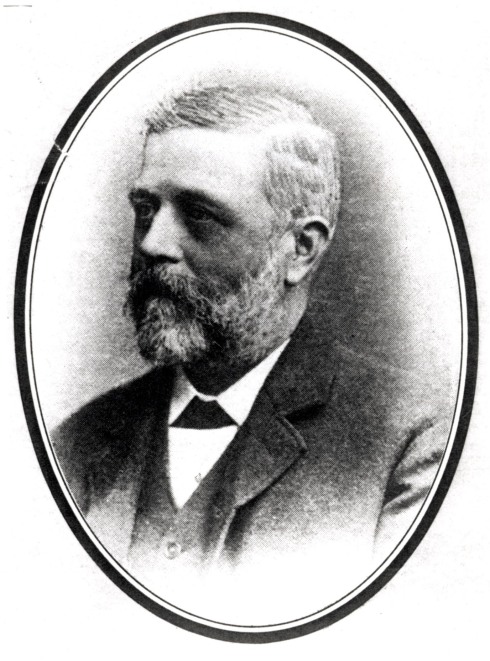 To sum up then: Thomas Crapper plumbing engineer, not actually the inventor of the flush toilet, but one of its leading proponents and manufacturers. A successful Victorian businessman, like Joseph Bazalgette a contributor to improvements in public health, and civilisation itself if you accept the idea that one of the main purposes of civilisation is to increase the distance between humanity and its waste products. Not only that, but his legacy includes some new words: crap, crappy and crapper itself.

So how could some commentators have come to doubt his existence?

The words became better known than the man I suppose and not everyone lives in Chelsea where the physical proof existed for many years. Then of course there was this book: 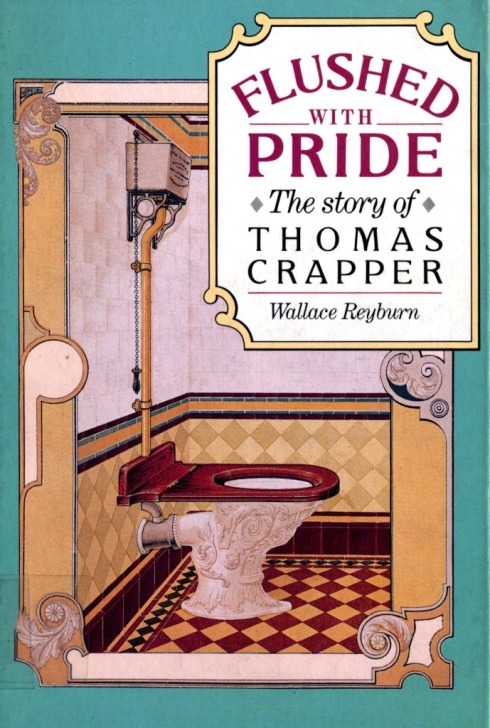 Flushed with Pride was written by Wallace Reyburn a talented author of books about sport and other subjects. The book itself is entertaining in a quirky seventies way, tongue in cheek and slightly vulgar but is mostly factual. The attribution to Crapper of the invention of the flush toilet is credited to Reyburn. There are some amusing anecdotes about toilets in famous locations and the author’s experiences in them. And the book was a minor bestseller.

Flushed with success Reyburn went on to write a quasi sequel: Bust-up – the story of Otto Titzling, inventor of the bra. (Do you see what he did there?) 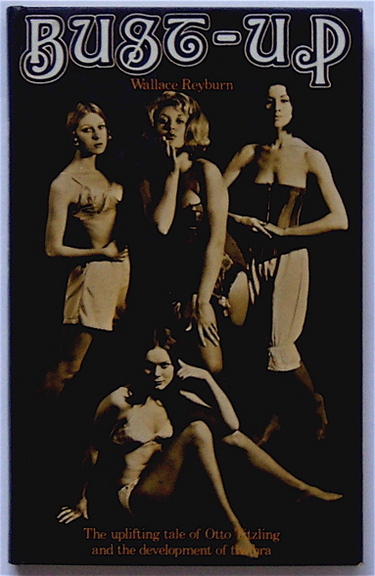 Need I add that despite the inclusion of factual material relating to underwear history, Bust-up is complete fiction, and only mildly diverting. (I admit to owning a copy bought entirely for the purposes of historical research.) According to Reyburn’s obituary it fooled the creators of Trivial Pursuit who included a question about Otto in the game.

It may have also been the confusion generated by the real Thomas Crapper being equated with the fictional German (I can’t face typing that name again) which caused some etymologists particularly in America to conclude that that Mr Crapper was equally spurious. Having made that conclusion they and other authorities discovered all sorts of instances of the words crap and crapper being used before Thomas Crapper became well known. “From the old Flemish to take one’s ease” etc.

Many American scholars came to Crapper’s defence but the one I knew was Mr Ken Grabowski who set about the task of proving to his compatriots that Thomas Crapper was a real person. He published an article in the pleasingly named academic title “Festschrift in honour of Virgil J Vogel”. (I mean no disrespect to Professor Vogel when I confess I find his name at least as amusing as Thomas Crapper) He consulted street directories, phone books, libraries, made a pilgrimage to Crapper’s grave and even arranged to have the fading lettering restored. 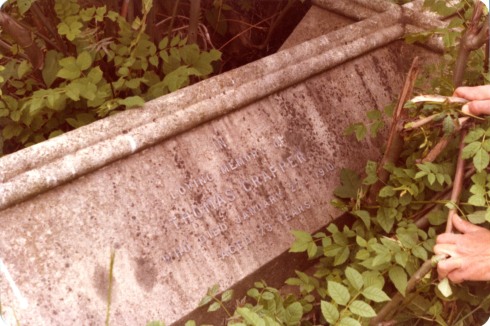 He went furthe,r interviewing former members of staff at the Crapper shop and even tracked down fleeting appearances of the shop in 60s films. Those of you who like such things and I know many people do, can see Dirk Bogarde walk past the shop at the beginning of the Servant on his way to an interview in Royal Avenue.

Ken found pictures of Crapper vans in action around London and did every possible thing to document the genuine existence of Thomas Crapper. He intended to publish a book but as far as I know it never appeared. Nevertheless for going to exceptional lengths to demonstrate his thesis our thanks go out to him and to all the other Crapper scholars.

You know I like a punch line. So here is a photo of another cult figure and Chelsea resident the author Adam Diment. His story is worth telling but I can’t do it as it has already been done. You can further details and pictures like this one at the excellent London website Another Nickel in the Machine.  http://www.nickelinthemachine.com/2009/08/the-disappearance-of-the-author-adam-diment/ 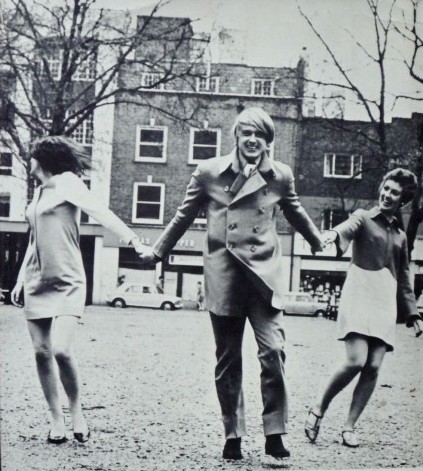 Look behind the tousled blonde hair of the briefly famous author with his two companions and you can just make out the name of that other Chelsea character Thomas Crapper on the alread boarded-up shop. which is where we came in.

And if you can find second hand copies of Adam Diment’s books, try them. They’re more amusing than Bust-up.

This entry was posted on Thursday, May 31st, 2012 at 12:15 am and tagged with Chelsea, King's Road, Thomas Crapper, Wallace Reyburn and posted in 19th Century, 20th Century, Chelsea. You can follow any responses to this entry through the RSS 2.0 feed.
« Empty streets: Sloane Street and Lowndes Terrace 1902
Regal memories: Royal occasions in the Royal Borough »

5 responses to “Toilet humour: the case of Thomas Crapper”