Summer in the city: the last days of Hurstway Street 1969 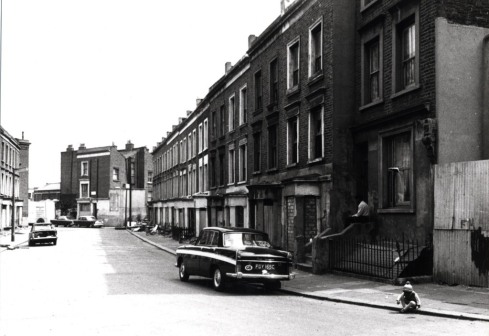 July 1969. A boy sits on the kerb playing, his father or brother nearby on the wall of the steps leading up to a house.  Take a look at the other houses and the general air of stillness in Hurstway Street. The streets were quieter in those days but this street is quiet because it’s awaiting demolition. If the house with the steps is where they live then they’re almost the last residents.

I picked Hurstway Street almost at random, looking through the Photo Survey pictures taken by the then library photographer John Rogers. It was this one which caught Imy eye first: 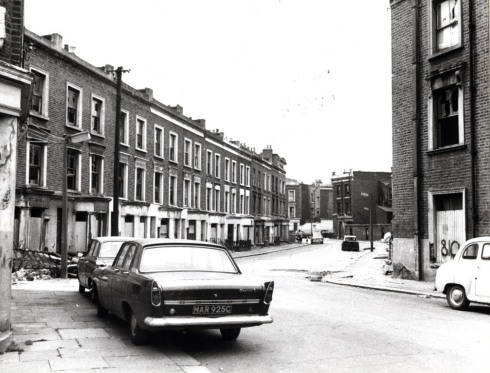 This shows the street from the other direction. It’s possible the boy and his father/brother are the figures visible in the distance but I was looking at the car. It’s a Ford Zephyr. A few years later in 1976 my friend Steve had one which he attempted to restore to working order. I think I sat in it, on one of the bench seats, in the cleaning bay at M——-  (P—- Street) Garage. On its maiden voyage the engine blew up and Steve was left on some road in north west London sitting with most of his worldly possessions in a vehicle which would never move under its own power again. So for me the car prefigures the fate of the street. And to make the point further look at the poorly parked vehicle in the distance on the right on the picture. 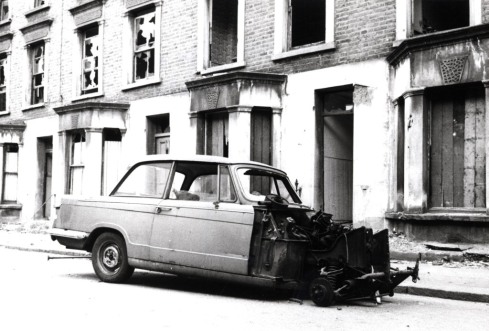 Some kind of Triumph? John was here that day to record the streets in the area in their last days but you can see why he took one of this wreck.

This is the location from a contemporary OS map: 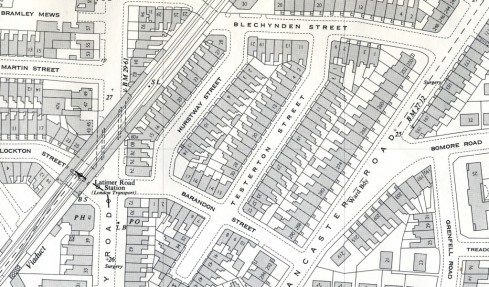 Several of the streets in this space between Lancaster Road and the Metropolitan line were ready for demolition or slum clearance  as they used to call it. John walked several of them that day. Hurstway Street runs into Barandon Street. 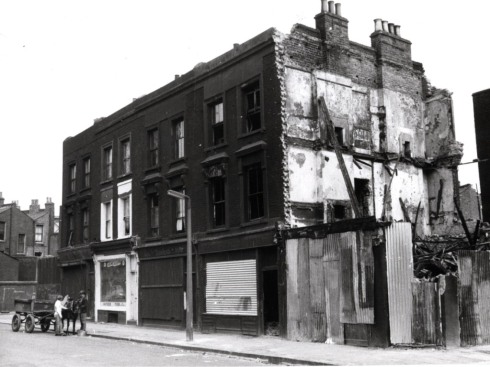 Demolition has already begun. There is evidence of a much older way of life here too. 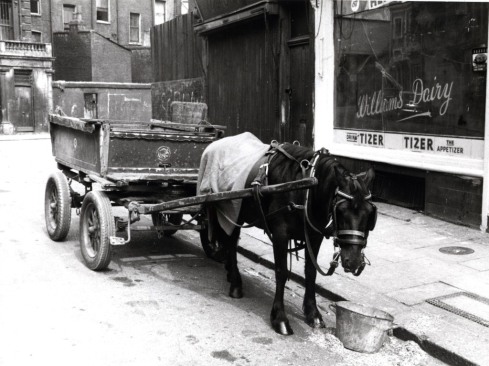 The street is quiet enough for the rag and bone man’s horse to take a break and have some refreshment. Do you see the advert for Tizer (the appetizer) that strange unnaturally coloured soft drink with a flavour I can barely recall now? 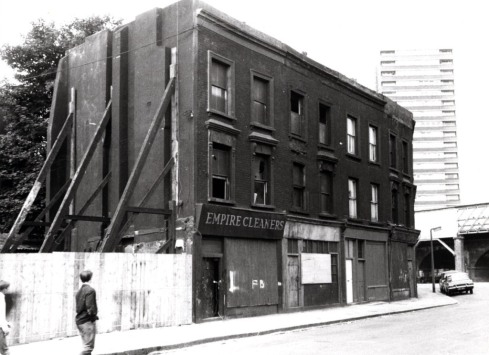 Beyond the blackened houses and boarded up shop fronts you can see the railway and the more recent housing blocks.

I imagine John turning from Barandon Street into Testerton Street. 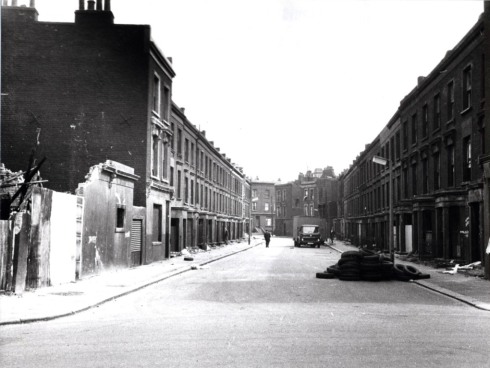 There is another tiny group of people with business in the empty street. See the pile of tires and the house next to it with writing on the wall? 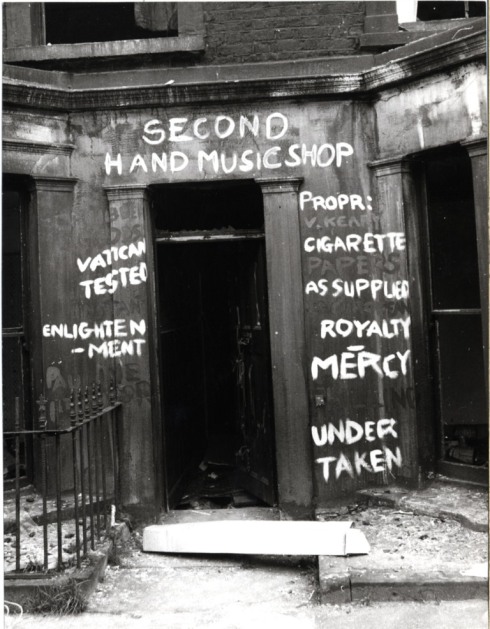 A strange and cryptic set of signs or slogans representing a final comment on the street? 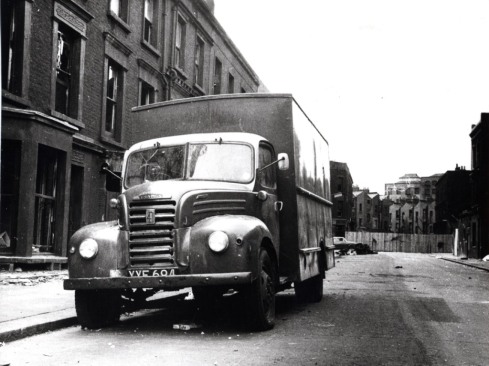 As he inspected it John thought this van too had been abandoned.

Seeing the doors open he went into one of the houses and got this picture from a rear window: 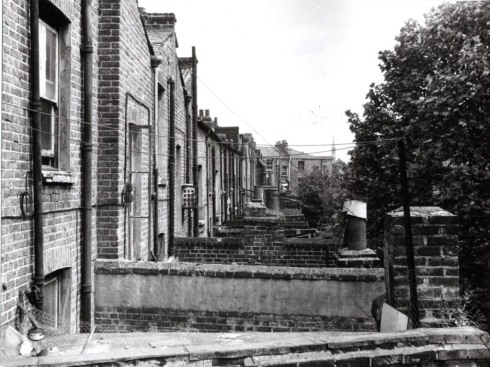 Finally he completed the rectangle by entering Blechynden Street. 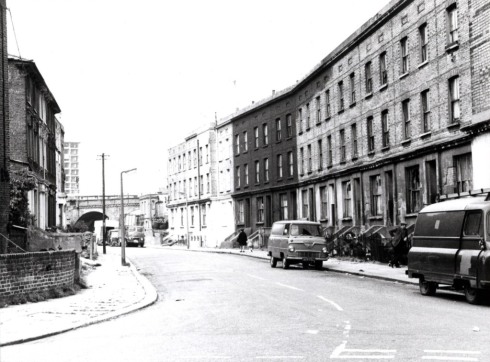 Blechynden Street looks slightly more active at first glance. But the houses are just as empty. 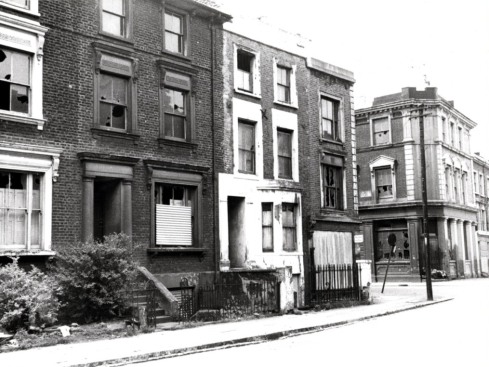 The only significant activity is taking place at the far end by the railway. 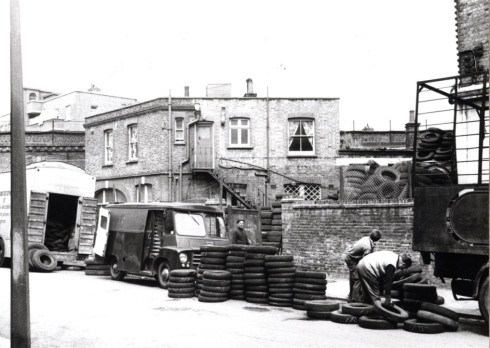 It looks as though a large number of tires are being loaded onto trucks and taken away. (Or it could be a delivery I suppose). 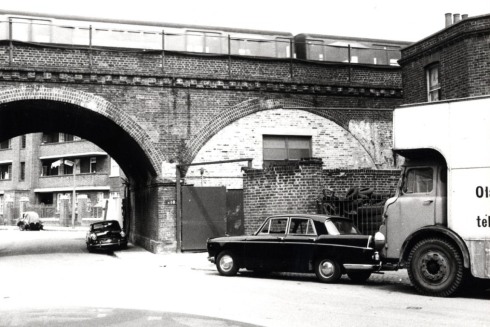 Here you can see a train passing overhead and through the tunnel a younger housing block on the way to Bramley Road. Another one of those cars with vestigial tail fins, which are the dull descendants of those baroque American cars of the 50s.

John’s walk round this rectangle of doomed streets is complete. I’m assuming that in the middle of July it would have been a sunny day, maybe even hot but you can’t see that in these pictures. Elsewhere in London people are sitting in the sun and having a good time, but here you can only see the grim business of a tiny part of the city being wound up and turned into a fading memory. 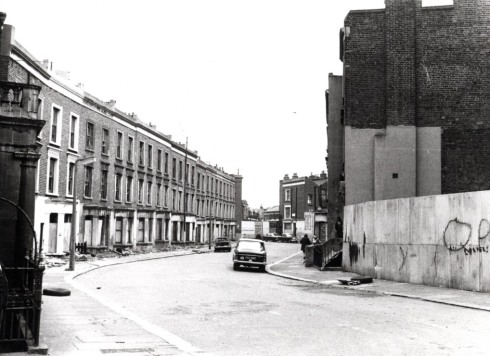 There are the boy and the man again, and a woman walking up the street. Perhaps they were just visitors like John taking a final look at Hurstway Street before it disappeared.  The names Testerton and Barandon were used again in new housing on Lancaster Road as was Hurstway – you can  find Hurstway Walk on modern maps but to the best of my knowledge the curious name Blechynden vanished with the street.

All photos by John Rogers.

This entry was posted on Thursday, November 15th, 2012 at 12:09 am and tagged with Barandon Street, Blechynden Street, Hurstway Street, John Rogers, kensington, Photographs, Tersterton Street and posted in 20th Century, North Kensington. You can follow any responses to this entry through the RSS 2.0 feed.
« An Englishman abroad: Sambourne in Holland
That’s entertainment: Bignell at the Palace »

70 responses to “Summer in the city: the last days of Hurstway Street 1969”