I just heard on the radio the writer John Banville say something to the effect (apologies for my paraphrase) that the fascinating past was once as dull as the present. So this week’s pictures should in theory be especially dull. The photographer Ernest Milner was up early in the morning again in April and May 1904 to get some accurate pictures of the way buildings looked without the distractions of people and traffic. The railway company which employed him wanted some evidence of the state of buildings near or above their lines in case of legal proceedings against them. So far so dull. But interesting details and interesting people have a way of creeping into photographs.

As the delivery wagon waits to be loaded its motive power has some breakfast.

Not the same day, although I wish it was, around the corner a man half way up a ladder at the West End Shoe Company notices Mr Milner. You can see those insistent big letters better in this picture announcing to the world the size and importance of the furniture warehouse.

Down the road are some more small businesses. The Earls Court Restaurant has an upstairs saloon which caters for large and small parties. As I enlarged the image to read the lettering I saw something I like to find but hadn’t previously spotted:

From the saloon a curious waitress keeps an eye on Mr Milner. Messrs Lanzani, Dolcini and Peechi are the proprietors of the restaurant. Is one of those her surname?

The dog isn’t interested in photography. I don’t think he’s waiting for an appointment with the solicitor, unless the solicitor is bringing him some sausages. 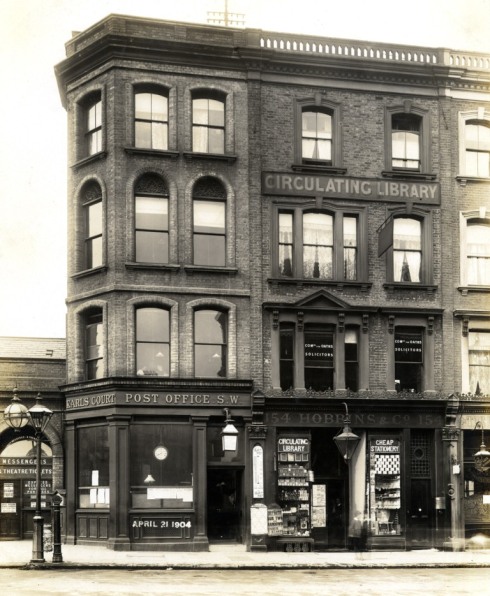 Below the solicitors Hobbins and Co sells cheap stationery and run a circulating library. You can make out a boy in front of the door possibly looking at the vanished dog. A man and a woman watch him from the doorway. People are hiding in these photographs waiting to be found. At the left edge of the picture you can see Earls Court Station. But in the next picture: 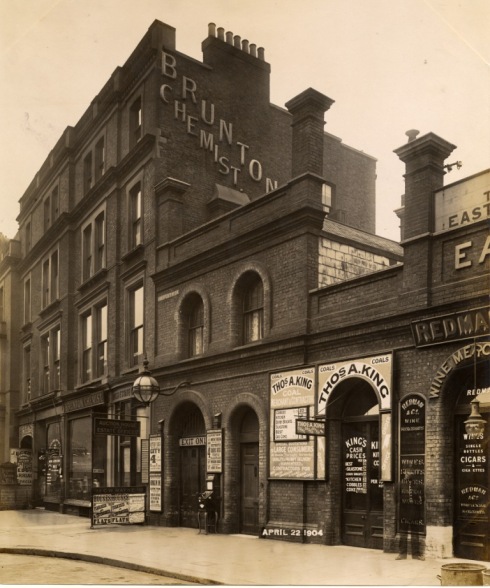 Milner hasn’t taken a picture of the whole station. But of course he didn’t have to – he was working for the railway company and they were not worried about their own property. He has given us a ghostly policeman and an odd looking ticket machine (I’d like it to be a “What the butler saw” peep show machine but that isn’t likely).

This is the station ten years later in 1915:

Redman the wine merchants and Thomas A King, coal merchants were still in business but there is a branch of Boots which wasn’t there in 1904.

Brunton’s was a dispensing chemist – the classic set of large dispensing jars are in the window, and next door are Watt and Sons, bakers. The alley is Old Manor Yard where J E Gentle, Job Master can be found.

Shall we go down there?

Milner must have come back a few weeks later to check the back of the building.

After this point the retail establishments give way to residential properties and professional consulting rooms.

At 164 were Whitcomb and Percival, physicians, working next door to Gill and Pugh, solicitors who shared the house with a Mrs Gale. You can see that 168, unoccupied in 1904 has the builders in.

The men at work are J Rugg and son who we will see again but I’m not entirely happy with that ladder lashed to the scaffolding at a precarious angle.

Next door at 170 (and 172) Mrs Beesley runs a boarding house. The woman in the doorway must be a maid.

She’s working herself into a blur of motion and completely ignoring Mr Milner.

After exposing that plate he went round the corner into Penywern Road to take a side view of the house. 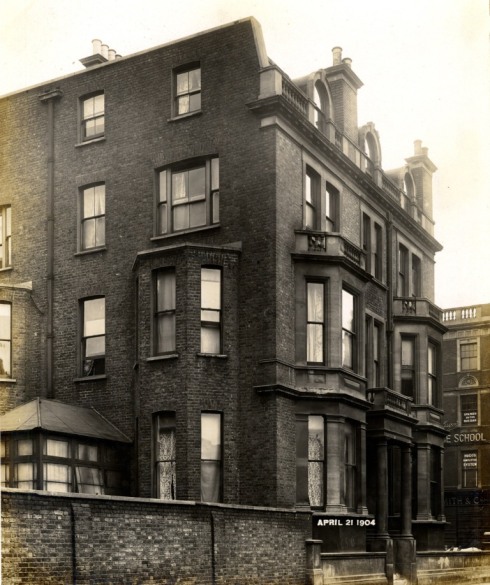 I took a close look at the picture to look at the state of the house and was quite impressed by the condition of the brickwork. I reminded myself that these buildings were still relatively new in 1904. I noticed another small detail: 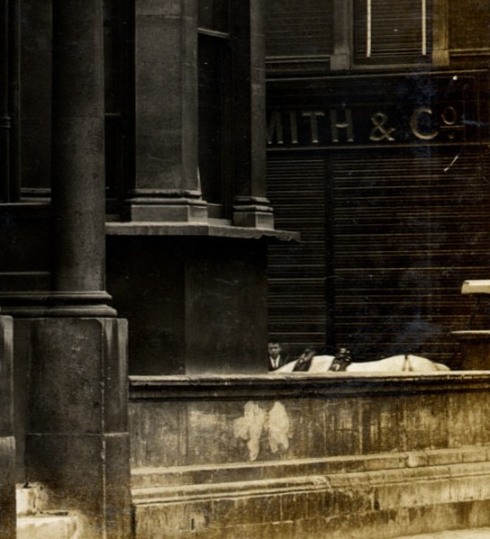 A young man and the back of another horse are just visible. And as we came in with a horse we’ll leave it there. I don’t know about you but I never tire of these photographs and the details you can find in them, so next week we’re crossing the Earls Court Road to take a look at the odd numbers.

This entry was posted on Thursday, December 13th, 2012 at 12:20 am and tagged with Earls Court Road, Enest Milner, Photographs and posted in 20th Century, Earls Court, Empty streets. You can follow any responses to this entry through the RSS 2.0 feed.
« The Kensington Painter – gardens where we feel secure
Empty streets: Earls Court Road 1904 – part two »