Forgotten buildings: the tower at the top of the hill

For the Victorians the movement of water around London whether for drinking, bathing or washing sewage away was much more than a simple utilitarian process. It was one of the pinnacles of new technology, and an essential part of the growth of civilisation. The mastery of flowing water was one of the great skills of urban living. So the buildings and structures associated with it whether below or above ground were subject to the same aesthetic principles as any other grand public building. Hence the impressive Italianate tower above which stood at the peak of Campden Hill and dominated the local skyline for more than a hundred years. You saw it first in the Towers of Kensington post but as I looked deeper I found quite a few pictures illustrating the tower’s rise and fall.

The Grand Junction Water Works Company acquired the site in 1843 in order to build a high level reservoir but they added the pumping station and the water tower a few years later. The tower did not contain a tank but a series of pipes into which water could be pumped to gain extra pressure to power its subsequent progress through the water network.

The Tower was a popular local sight and can be seen in a number of pictures by local artists my favourite of which is this watercolour by Elizabeth Gladstone:

Remember that spire on the left.

The Grand Junction Water Works Company and all its assets were taken over in 1904 by the Metropolitan Water Board. The tower remained undamaged in both world wars. Here it is in 1964 surmounted by some kind of electronic device: 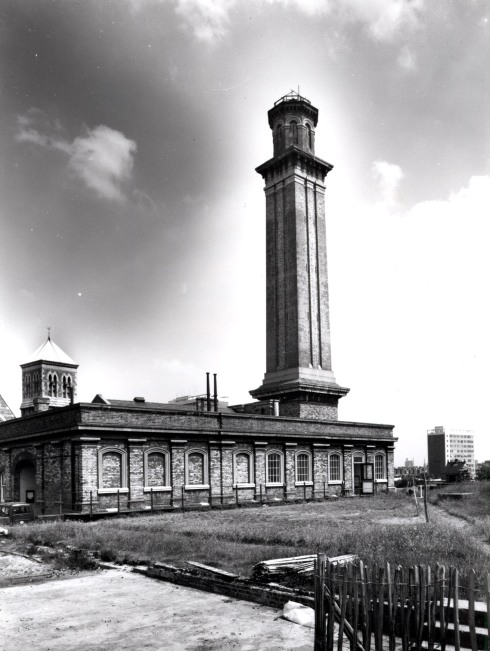 This picture shows the space around the works including part of the covered reservoir. The truncated tower of the “strange and wilful” St George’s Church. Aubrey Walk (1863) is visible behind the works and the tower block on the right is the equally wilful Campden Hill Towers at Notting Hill Gate. 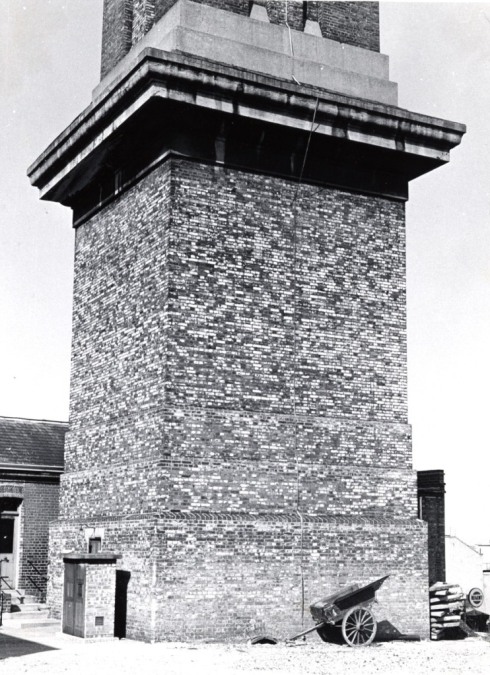 This 1965 picture shows the intricate detail of the brickwork.

Inside the works was some impressive machinery.

By 1970 the tower was surplus to requirements and the land it stood on ripe for development. As luck would have it our photographer John Rogers was on hand to chronicle its slow demolition. Here the main pipe is exposed.

This was not one of those Fred Dibnah style spectacular demolitions. Because of the solidity of the structure and its closeness to a residential area the tower had to be disassembled almost brick by brick. Here is the first sign of the secondary pipe:

A man is working up there with a hand held jack hammer which would have made progress slow. Gradually the double pipe is revealed: 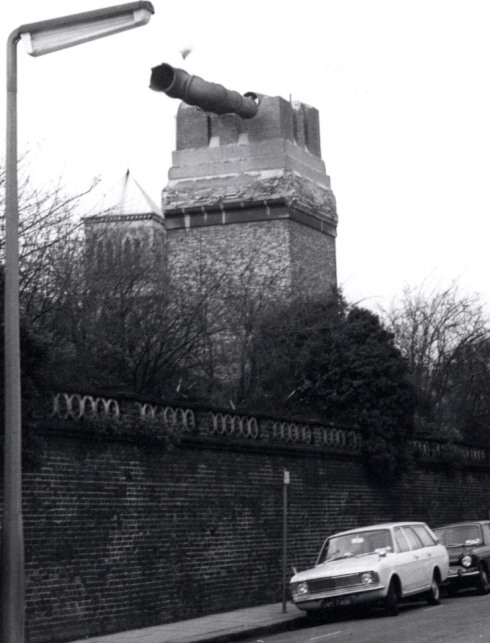 Finally the base is demolished. It is now safe to use a wrecking ball.

You can see how massive the walls of the tower were. The crumbling brickwork spills out of the gate. 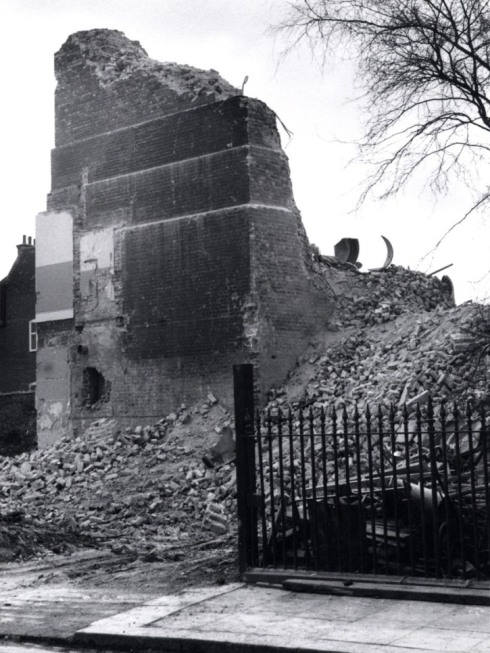 The tower is gone. A few short weeks before there was snow on the ground and a family walked up the hill on a chilly February day.

The tower has joined the ranks of vanished buildings left behind as London moves on. But at least its passing was recorded.

“Strange and wilful” is one of those slightly odd descriptive phrases from the Survey of London which I have come to treasure. “Pungently Burgundian” is another. If you come across any yourself in the Survey or any other architectural guides please send them. There might be a whole post based on them one day.

This entry was posted on Thursday, March 21st, 2013 at 12:19 am and tagged with Campden Hill, Grand Junction Water Works Company, St George's Church and posted in 19th Century, 20th Century, Forgotten buildings, Kensington. You can follow any responses to this entry through the RSS 2.0 feed.
« Trelawny at the Royal Court 1898
Return of the Edwardian sartorialist – Sambourne’s Kensington street style »

11 responses to “Forgotten buildings: the tower at the top of the hill”