John Ruskin wouldn’t sit down for this picture. However poor the state of his health he felt it was unthinkable for him to sit in the presence of Rossetti so the great artist held him up. Ruskin was a man of high ideals and aesthetic principles. He had been one of the early supporters of the Pre-Raphaelites so Rossetti’s loose morals and the strange ménage at Tudor House wouldn’t have bothered him. But nevertheless it would have been hard to find two more unlikely companions in the whole of Victorian England. Rossetti represents the sensual side of the Victorian imagination let loose about as much as it could be. Ruskin of course represents the repressed imagination and it was that respectable side of his nature which drew him into collaboration with John Faunthorpe the Principal of the teacher training establishment in the King’s Road, Whitelands College.

Faunthorpe was a fan of Ruskin’s. He admired the great man extravagantly, idolised him even. So in1880 inspired by Ruskin  he floated the idea of starting a May Queen Festival at the College. Ruskin had form in this area, he had tried to start something similar at a school in Cheshire but parents had objected (Ruskin’s divorce / annulment from his marriage with Effie Gray and her subsequent marriage to Millais had been a great scandal). Between them the two men worked something out which combined Ruskin’s love of picturesque old English ritual and Faunthorpe’s desire for high Anglican ceremony. The notion of a may queen may also have appealed to  Ruskin because it involved pretty young women for whom he had a sentimental regard after the failure of his marriage and the derailment of his romance with Rose La Touche. The Victorians in general were given to sentimentalizing youth (perhaps because they frequently saw it snatched away by sudden disease and death, the very fate of Rose la Touche who died at the age of 27).

Ruskin donated a set of his books each year to be handed out by the new Queen, and paid for the design of the first in a series of crosses which were given to each Queen. The May Queen was chosen by the votes of the students (she should be “the lovablest and the likeablest” was Ruskin’s mawkish guidance to the voters). The first was Queen Ellen I.

Unfortunately for the ceremony Ellen was in mourning at the time and wearing black so a white shawl was found for her to wear. Ruskin pestered Faunthorpe for a photograph and then rather ungraciously said the Queen looked like she was 38. (She was 20). Although he did visit the College regularly he never attended the May Day ceremony. Perhaps he preferred the festival as a romantic ideal. After Queen Ellen the Queen and her maidens had dresses made for the occasion.

Ruskin had his protégé Kate Greenaway design a dress for the Queen which was passed on for four years.

But as the Festival continued it became customary for former queens to return and take part in the festival so the Queen needed a unique outfit. 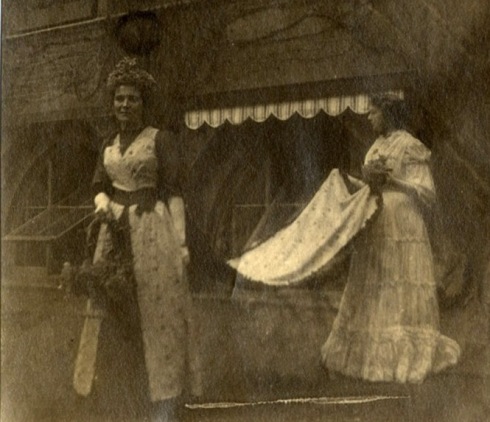 May Day is a festival dating back to pre-Christian times. It’s related to the Celtic festival Beltane and the Germanic Walpurgis Nacht. Faunthorpe wanted to emphasise the Christian elements, and Ruskin had exalted ideas about feminine innocence and purity. But despite that this version of May Day still had its May Pole, and retained the flowers, garlands, branches and wooden staffs which still have their older pagan connotations. Here’s Queen Annie again in her throne room.

They look like they’re starting to get the hang of it. Some former queens are present (see if you can spot Elizabeth II). They’re beginning to look a little like a female Masonic lodge.

Ruskin died in 1900 but the Festival no longer needed his blessing and seemed to grow in importance and complexity. If you remember I first dealt with the May Queen in Games for May. In that post I linked the Festival with the Chelsea Pageant just because I found the pictures together but the more I find out about the two events the more I think they belong together as part of the same current in the first decade of the 20th century. The Edwardians seemed to have a propensity almost amounting to mania for dressing up and engaging in theatrical rituals and performances, especially out of doors. In an age of technological innovation perhaps they were reliving the myths and legends of an older England. An England of their imagination.

Behind the stern walls of the College was a quadrangle with ivy-covered walls where the ceremonies could take place out of sight of the busy streets outside.

The May Day festival took a whole day and required much preparation. The entire student body of about 150 got white dresses paid for by the college. There were services in the college chapel, a procession, an abdication ceremony, an election (although it became expedient to have the election before May Day so the new queen could be fitted for her dress) a masque, or some “revels”, and the crowning of the new Queen who would give out gifts of copies of works by Ruskin to selected students.

In 1906 there happened to be three queens in the College at the same time, the new Queen Florence, her predecessor Evelyn and the 1904 Queen Mildred. 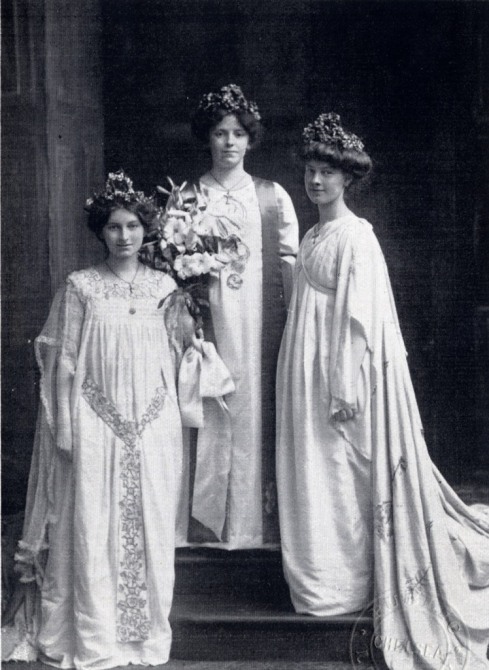 Mildred in particular looks like she’s just come off the set of one of those 1970s Hammer films like the Vampire Lovers. Or (as I’ve said before) the cover of an album by a 70s English folk rock group, especially in the masque picture below.

They pulled out the stops on this one. Florence proceeded to her coronation with her maidens in tow.

And Mildred took the lead in a masque in which the students played flowers and trees and paid homage to her. 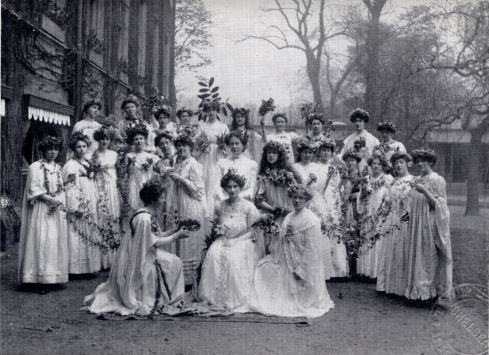 In 1909, the year after the Chelsea Pageant there were more elaborate ceremonies. Here is Agnes II, with her chamberlains.

On the throne with the Dowager Queen Dorothy.

Behind them is a painting of the 1902 ceremony. Check out the leopard skin.

There was even a special appearance by this lot:

Not real nuns of course, just some of the Pageant performers from 1908 who just couldn’t resist coming back for an encore. It might have been their last chance to join the procession with the women in white. 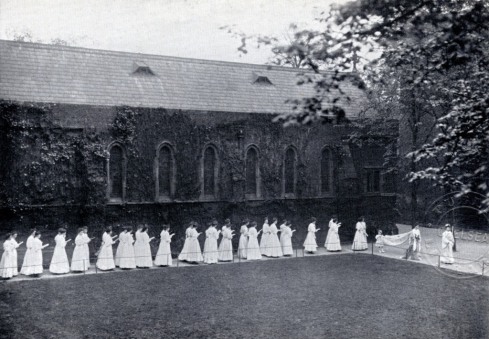 And oddly, it seems to me that at that point they had peaked. The May Queen Festival continued of course, carries on to this day in fact, but in the second decade of the century the ceremonies gradually became less elaborate and the College slowly seemed to stop making quite such a big thing of May Day. Or it could be that young women were getting more serious about their profession and less serious about quixotic ritual. I heard someone on the radio recently saying that the Edwardians had a kind of innocence based on hope, the hope that the new century was going to bring progress and prosperity. By 1910 perhaps the zeitgeist was looking a little less hopeful than before and the revellers decided it was time to put the costumes back into the dressing up box.

Still, there were many more May Queens at Whitelands and when they gathered together for the ceremonies there was quite a bunch of them, now engaged in charitable works as well as Christianised neo-pagan rites. They even had a leader, the Mother Queen who was the oldest of this select group.

The first May Queen, Ellen I, now out of mourning, in her own robes, leading the procession again in 1912. She died in 1923, mourned by her fellow queens, but never forgotten.

That was quite a long post. Just as with the Chelsea Pageant I discovered a lot more material than I had imagined we had. Enough for another post next May Day if you can wait that long. I showed the pictures to a colleague and she said “it looks so pagan” – so it isn’t just me who thinks that.

The picture of Ruskin and Rossetti comes from the book the Victorian art world in photographs by Jeremy Maas. There is supposed to be a copy of it in William Rossetti’s memoirs but our copy had that page missing. There was an interesting picture of Maria Rossetti though which I intend to use in a future post.

Whitelands College moved to Putney in 1930 and has since moved again. It is now part of the University of Roehampton. The May Day Festival continues and they have May Kings now as well as May Queens. This year’s festival is on May 18th.

Postscript to the postscript

See comment below. Queen Thyra (1890) from Malcolm Cole’s book on the May Queen Festival,

This entry was posted on Wednesday, May 1st, 2013 at 9:48 pm and tagged with Chelsea Historical Pageant, fancy dress, King's Road, May Queen, Whitelands College and posted in 19th Century, 20th Century, Chelsea, Fashion. You can follow any responses to this entry through the RSS 2.0 feed.
« London Transport: travelling in Kensington and Chelsea
In a white room, and other modern colour schemes: 1934 »

7 responses to “Rite of spring: Mr Ruskin’s May Queen”