Lots Road is that rarest of street configurations, an L-shape so it has a north side, a south side an east side and a west side. So where do we begin? Here?

This is the view looking south from Stanley Bridge, just to the west of the junction with the King’s Road and right on the border of Kensington and Chelsea. The rail line which was constructed on top of the filled in section of the Kensington Canal is on the right but it looks as though a small section of this part of the creek survived.

But let’s not go that way. What about starting at the other end?

That’s the junction with Cremorne Road. The Power Station is visible with two of its chimneys intact. On the right, a small corner shop. There were still plenty of those left in 1972, the year John Rogers took these pictures for the Library. Another summer day at the tail end of the long 60s.

Just as in Hurstway Street a few years before Tizer is still popular. Above the door is a lager advert featuring Henry VIII and one of his wives, uneasily drinking a pint of Harp under the motto Keep a cool head. I must have drunk Harp, one of those generic British lagers but I can’t remember the taste, if any.

The north side of the street was destined to survive in the face of redevelopment but came perilously close to meeting the fate of Bifron Street, Raasay Street and the rest. A little way down the road you can see one of the towers of the World’s End Estate rising. In 1972 it would become the largest council estate in Europe.

It’s often assumed now that the large housing developments of this period were a bad thing. It’s certainly true that the houses in the World’s End which were demolished at this time would probably have been gentrified had they survived and would now look pretty good. But almost none of them would be in use as social housing. I’ll do a post on the construction of the estate one of these days.

The south side of the street was occupied largely by commercial buildings of one kind or another.

The easternmost part of Chelsea had been an industrial zone since the latter half of the nineteenth century. Even when the high and the low were at play in Cremorne Gardens, raw materials were being landed and unloaded at the various wharves on the river and on Chelsea Creek which continued north as the Kensington Canal, a never quite profitable venture created by the then Lord Kensington. Lots Road the former Poole’s Lane followed the  line of the canal northwards to the King’s Road hence the L shape. The wharves were still in use in 1972. 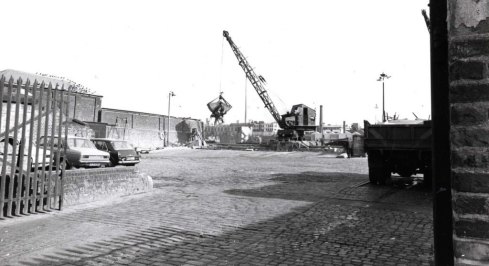 Note the  cobbled surface redolent of the 19th century even  clearer in the picture below.

Behind the crane you can see the south side of the river. Just visible above the head of the man on the right is St Mary’s Church which has been a significant landmark in images of the south bank foe more than a century. I think I’m right in saying that all the other building visible on the south side of the river are now gone. (I should apologise for any inadvertent inaccuracies in this post by the way. I know that many people know the history of this bit of Chelsea far better than me. I meant to have a walk along Lots Road before writing this but couldn’t quite find the time. However it looks as though at this pace this post is going to end up as a two-parter so I may have time for some field work yet)

This shows the warehouse across the river in better detail but as you can also see there are two churches visible so it’s possible the one in the previous picture was not St Mary’s. Comments are welcome on this point and any other details in the pictures. 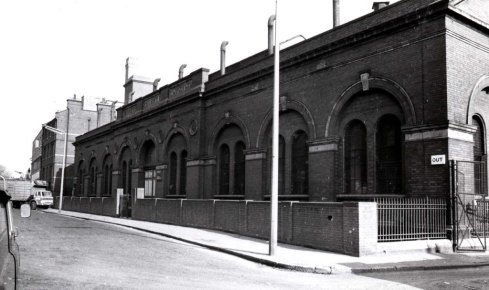 Some of the Wharf buildings have been redeveloped but the Pumping Station has survived as has the building below (although it has been seriously modernised) :

For me what makes this picture fascinating is the two pigeons strolling into view from the right. It may have been a quiet moment of the day but in many of the pictures from this period you see a quieter version of London where lazy birds can walk in the street without being disturbed.

A man can also wheel a barrow down the street.

The large windows in the foreground belong to the Power Station. Unlike its more famous counterpart in Battersea, Lots road Power Station is right on the street where you could walk by and glimpse the massive machinery within.

Further west we reach the end of the east to west section of the road.

Another view of the ranks of tall windows.

It does look as though we will have to pause here with a view of one of the famous pubs of Chelsea. 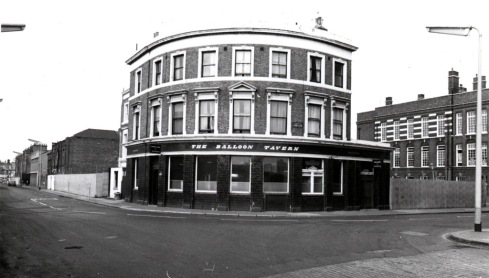 The Balloon has gone under a few names including one very long version when it was part of the Firkin chain of real ale pubs. How did that name go? Oh yes, “The Ferret and Firkin in the balloon up the creek”, which had definite local connotations.

If I do manage to walk down Lots road before next week I’ll take some pictures, but if anyone has any modern ones of their own they’d like to share feel free to send them to me at dave.walker@rbkc.gov.uk or post them in the comments section.

This entry was posted on Thursday, July 11th, 2013 at 12:06 am and tagged with Chelsea, John Rogers, Lots Road, Lots Road Power Station and posted in 20th Century, Chelsea. You can follow any responses to this entry through the RSS 2.0 feed.
« Bignell and the Goddess
Lots Road south to north:1972 and 2013 »