In the autumn of 1893 Mary A_____, who was then 31 and her sister Rachel who was 18 set out on a walking tour of the Cheviot Hills. Here they are ready to go, with stout shoes, walking sticks and bags: 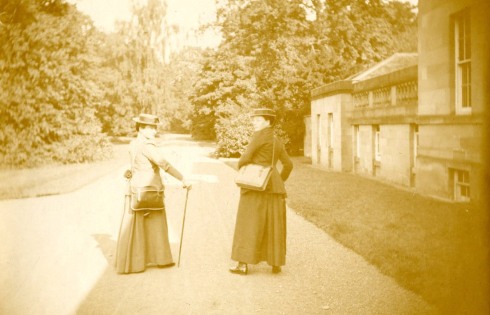 Mary took a small sketch book and her watercolour set so she could make her own record of the journey in words and pictures as they travelled. I came across the book when a researcher was working on other material belonging to the same family. I was immediately impressed both by Mary’s small paintings and the vividness of her account.

Mary and Rachel were initially accompanied by their sisters Cicely and Grace and two friends, Gertrude and Nelly. Nelly and Grace dropped out first but Gertrude and Cicely stayed the course until White Hall where the four of them had luncheon by the burn.

Mary sketched them making their way back. 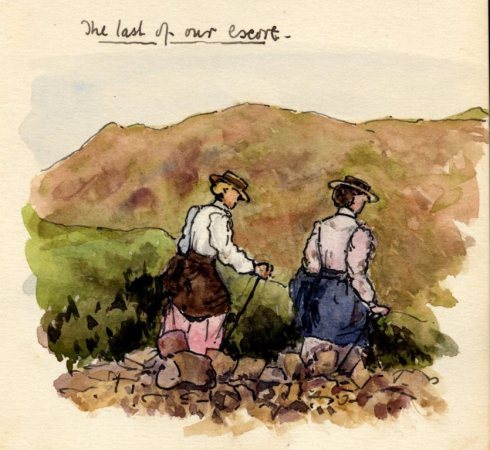 “Then Ray and I walked on, keeping to the grassy track. Some little way further up we had to ford College-burns, it was lovely walking across through the cold water. The hills were most beautiful, the bracken was beginning to turn and we got quite tired of saying “how delicious it is”. Then we came to a most primitive bridge which we had to cross though it did lead us a little out of our way. This however we didn’t regret as we saw further up a charming little valley on our left. Very soon our destination for the night came into view and we both began to feel rather anxious…..” 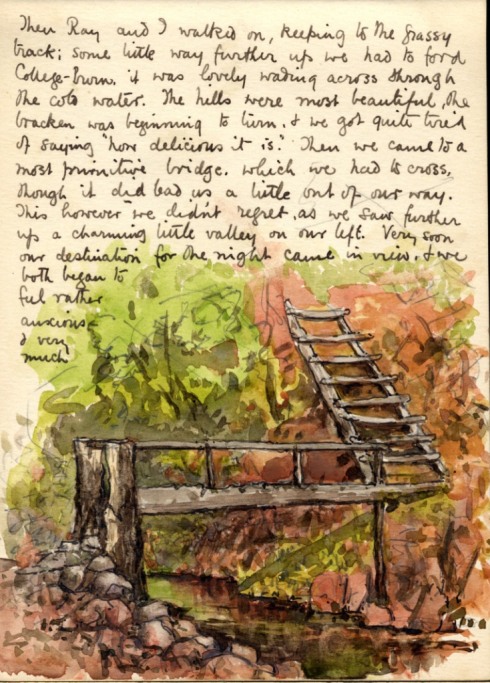 The source of their worry was the possible nature of their first night’s accommodation. Would the guest chamber be occupied? What if the shepherd’s wife was “crusty”?  In fact she turned out to be “perfectly charming” and after settling in they went out again. Mary drew and Ray “found perfect happiness among the pigs”. 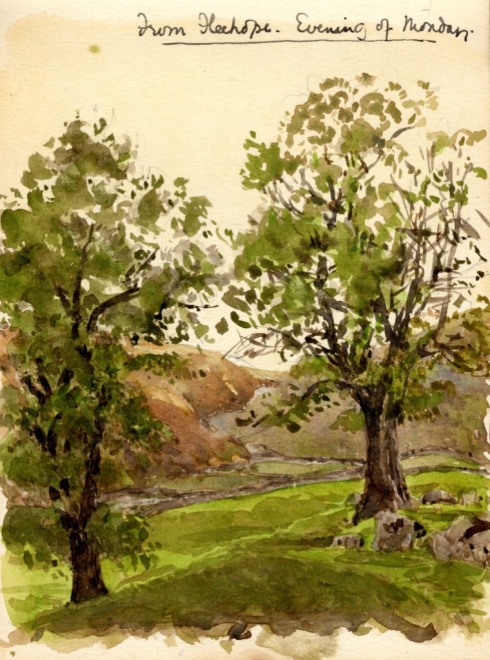 After a breakfast of coffee, cream and ham at 6 the next morning they set off up the valley into the mist. “We soon lost the track and had to steer by compass”. At the summit the mist cleared and they saw “rolling mountains stretching away as far as we could see.” “It was wonderfully wild and lonely”. They marched on through the lonely landscape, consulting the compasses as they went. As they headed downwards they “plunged through sphagnum and reed bogs “and “there was no sign of a track anywhere.” 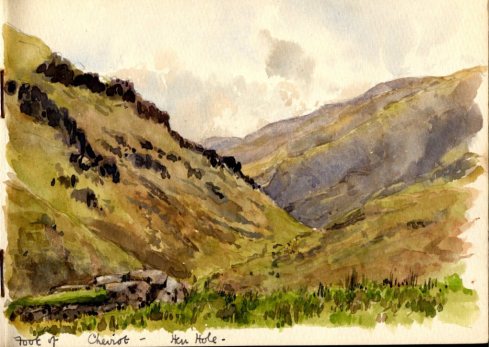 At 1pm they stopped at a cottage for some milk and to consult a shepherd about the path ahead. They pushed on, even though there was “rough walking over the tussocky grass” and crossing the stony river several times eventually found their way to the bottom of the valley. They stayed in the village of Allinton which was “so tiny that we anxiously began to wonder if it possessed an inn”. Fortunately it did, the Red Lion, and the two travellers were soon “installed in a charming little bedroom containing 2 beds and from the windows of which was the most delightful view.” 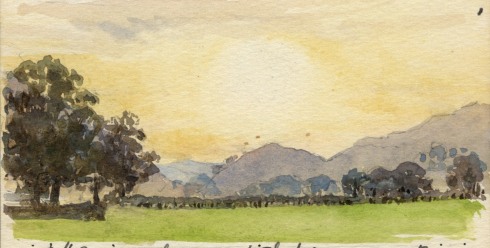 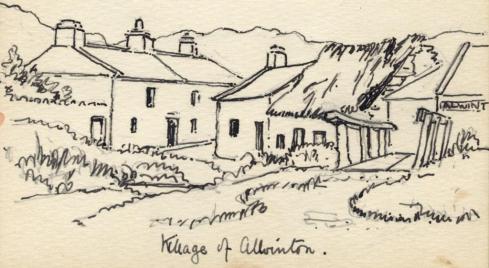 They slept in the next morning and reluctantly departed at 10am. “As we crossed the village bridge Ray’s hat blew off and had to be rescued dripping wet”. The road, which “wound between pine woods” took them to another hill track. At the top of the hill they “found they must prepare for a regular battle with the wind”. Mary tied a black scarf over her head but Rachel “having none had to adapt a stocking for the purpose”. The “perfect hurricane of a sou-wester..met us full in the face”. They stopped for milk and shelter at a cottage “where we sat in a cosy kitchen with a blazing peat fire”. On hearing of their destination the cottager’s wife said “My word ye’ll get a blawing”. They soon hit more mist and driving rain and decided to head down into the valley towards the nearest village. “Looking like tramps” they knocked at the door of the Murray Arms where a “grand young lady..hesitated for a moment as to whether she could admit us but feelings of philanthropy gaining the day she showed us a room resplendent  with salmon pink decorations and peacock blue upholstery. Here we divested ourselves of our wet things which were solemnly taken by the servant to be dried by the kitchen fire, and not a muscle of whose face moved when she came up with tea and saw me arrayed in a Japanese costume made out of a duvee.” 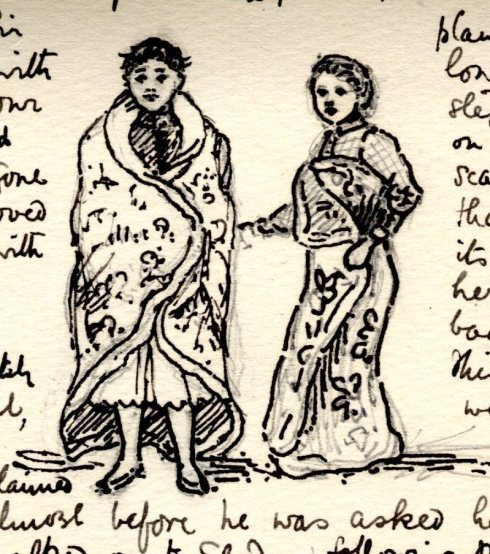 There was “thick mist and low clouds” visible from their window the next morning but they carried on and by lunch time the sun had come out and “for the rest of the day it was beautifully fine.” Up on the moorland they saw “rocky ridges, beneath the sloped moors brilliant with brown and crimson”. They halted “trying to take mental photographs.” “A little lower the road became almost more lovely, it wound round a little wood of silver birches… then on through a brilliantly green sloping field.. I do not think I ever saw anything more beautiful than that valley.” At the bottom they “left the higher hills behind us. They had walked 9 miles and were feeling “footsore” but “were doomed to bitter disappointment, there was no inn.” 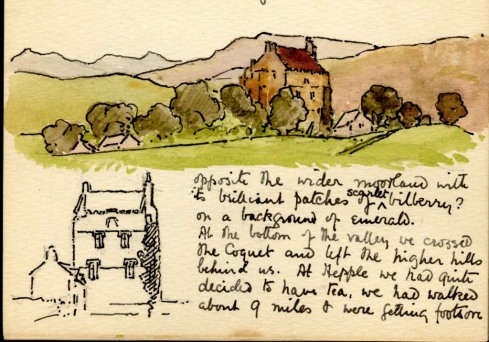 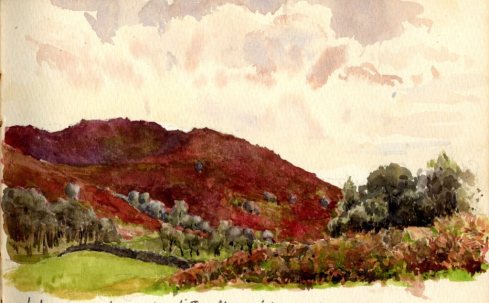 They did find a cottage though where “two charming and pretty girls of 16 and 20” invited them to sit down  and have some freshly baked hot bread. “It was an ideal cottage….a fat baby boy lay smiling in a wooden cradle..the girls were dressed in the neatest dresses..and the big north country fireplace was doing its duty”. “We decided a story ought to be written about those girls.” The girls told Mary and Rachel that 4 miles on they would find an inn. But they were not tempted by the cheese and biscuits offered there and walked another 2 miles to Rothbury where they found “comfortable quarters at the Queen’s Head and were very thankful to settle in”.

The next day was Friday. They found the Priory at Prinkburn closed and inaccessible. Long Framlington proved to be a “bleak. Rather uninteresting village”. Mary found a nail sticking into her foot and despite the repair affected by a “friendly keeper” found it hard going. At Edlingham there was no inn and tea “made we thought of boiled leather”. They headed for Bellingham cross country through “a wood which was swarming with creatures scudding about and birds flapping their wings in the dark trees with a great air of mystery. We were quite glad to escape being shot as poachers and reach the main road.” They eventually got to Whittingham around 6pm where there was “a delightfully clean and comfortable inn”.

Saturday was the last day of their tour. “We felt exceeding shabby..however it was market day and we thought we might pass among the farmers”.  After lunch they moved on. “We arrived in Coldstream in great triumph feeling very proud of having walked 77 miles and knowing well that the week we had spent would all our lives be looked back upon as one of the most delicious we had ever spent.” 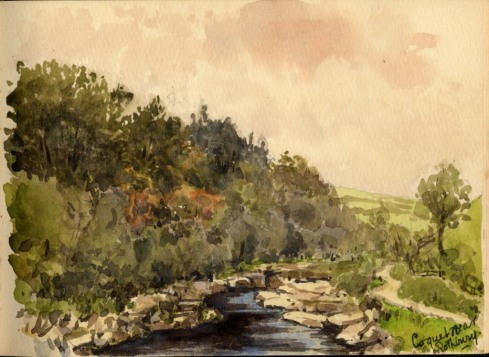 Mary’s narrative and pictures still convey the sense of adventure and achievement the two sisters must have felt, venturing through one of the wild parts of 19th century England. It was a short journey compared to those of other 19th century travellers but Mary and Rachel were in at the beginning of a new era of travelling and it’s good to have walked those hills with them.

Mary lived till 1950, Rachel till 1972. I recently met their relative who deposited the material with the library and who gave me permission to share this journey with you, so many thanks to him and his family.

I just wish Mary had painted the room with salmon pink decoration and peacock blue upholstery.

For modern day walking enthusiasts here is Mary’s summary of the journey: 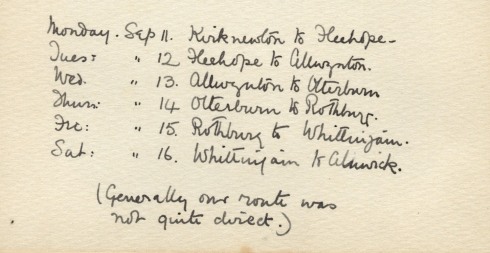 This entry was posted on Thursday, October 3rd, 2013 at 12:08 am and tagged with kensington, travel and posted in 19th Century, Kensington, Painting. You can follow any responses to this entry through the RSS 2.0 feed.
« Portrait of the artist as a young dude
More Markino: water and women »