Mr Menpes on the river

There are several parallels between the work of Mortimer Menpes and Yoshio Markino. Markino brought a Japanese sensibility to the way he looked at London and Londoners, and an outsider’s eye for the unfamiliar sights of his new home. He was particularly fascinated by the river. This fascination was shared by Menpes who published this book, The Thames in 1906 in collaboration with G E Mitton.

Menpes also brought an outsider’s viewpoint to the river. Remember, he was from Australia and had been brought up in quite a different climate and landscape. So it’s not surprising that while Markino concentrated on London’s river, the tidal Thames with its bridges, embankments and fast flowing water, Menpes was captivated by the other Thames above the tide. This was still a world of country towns, lazy river pursuits and long still sunny days -that late Victorian / Edwardian summer epitomised by Jerome K Jerome’s Three men in a boat or Kenneth Grahame’s the Wind in the Willows. 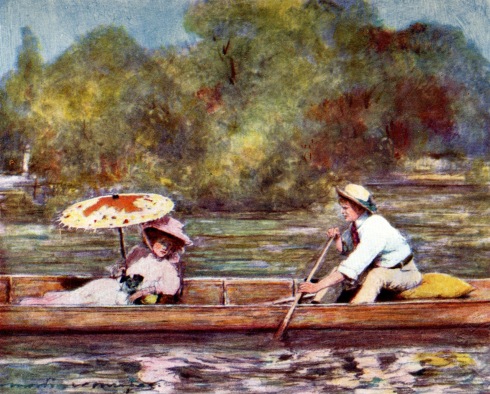 The other thing Menpes shares with Markino is an eye for the picturesque qualities of the new women of the Edwardian era. Sometimes they lounge casually under a parasol with the obligatory small dog who, like his literary ancestor Montmorency is an essential part of the crew for a river journey in a small rowing boat. Sometimes they took the oar themselves.

In this case it looks like the same woman, slightly sad about having to dump her companion but happy to be making some progress at last. The upper Thames had declined as a route for commercial traffic but had seen an enormous growth in boating for pleasure. There were tranquil backwaters suitable for punting.

Deserted stretches, given over to wild life.

“Hear the lark and harken to the barking of the dog fox gone to ground.
See the splashing of the kingfisher flashing to the water.
And a river of green is sliding unseen beneath the trees,
Laughing as it passes through the endless summer making for the sea.”

There were plenty of places for river sports, boathouses for the small rowing skiffs and the solitary canoeist:

But the river was also a site of mass entertainment. Large gatherings of pleasure seekers attended events like Henley Regatta as they still do today. These events were attended in huge numbers by the new middle classes who had leisure time to fill and the ability to travel to formerly exclusive spots by train and river boat. 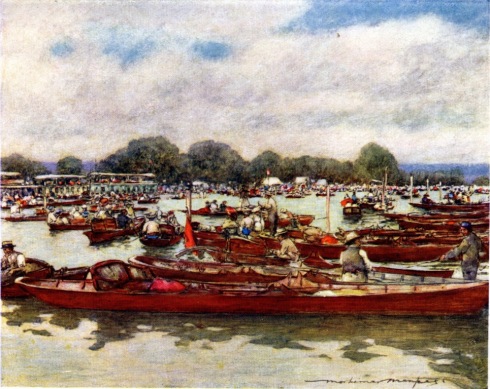 Along with the rowing boats in all sizes there were the giant houseboats, like floating hotels which were towed from one riverside event to another. These were the glory days of the upper Thames. The picture below is of Boulter’s Lock on Ascot Sunday:

A traffic jam of river craft in the narrow waterway. Below, the area near the lock where larger  boats and  steam launches wait their turn. You can even see one of the luxurious houseboats (gin palaces as one of Jerome’s characters called them) although I doubt if could go through the lock. 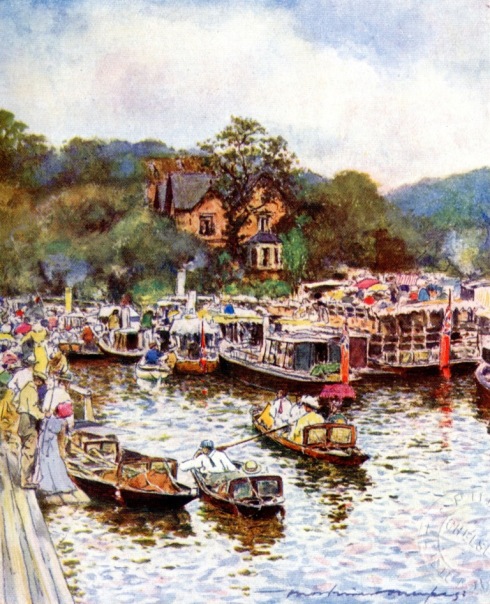 By the end of the day the crowds of fashionable pleasure seekers had withdrawn to their houseboats and inns or just made the journey home and the river was calm again.

All the different kinds of river craft had made their way to a mooring.

The very fortunate had a pleasant riverside dwelling to return to as the sun went down.

The sun hangs low in the sky and the river people are indoors telling stories about their exploits on the water. 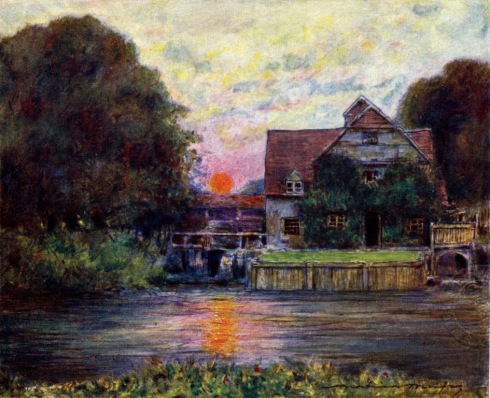 “If I had wings and I could fly,
I know where I would go.
But right now I’ll just sit here so contentedly
And watch the river flow.”

The picture below is my favourite of Menpes’s illustrations of his river journey. A woman finds a comfortable spot and nods off on a quite summer afternoon. Her parasol slips back, but her face is still shaded by her wide brimmed hat. Her unseen companion sits quietly at the stern so as not to disturb her. Even the dog sits calmly enjoying the same relaxed moment as his human companions.

“Put on a gown that touches the ground
Float on a river forever and ever, Emily “ 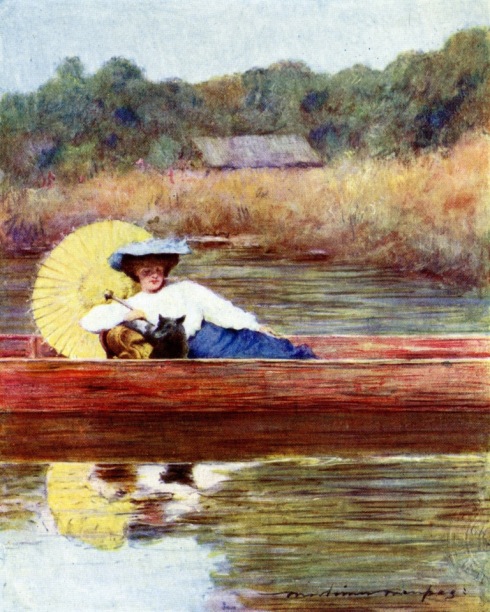 The peaceful moment lives on forever.

“The river flows
It flows to the sea
Wherever that river goes
That’s where I want to be
Flow river flow
Let your waters wash down
Take me from this road
To some other town.”

Everybody knows Jerome K Jerome’s Three men in a boat but for a modern day version of a river journey try one of my favourite books, Nigel Williams’ Two and a half men in a boat.

We’ll come down to the river again one day I’m sure.

Finally, thanks to Kat for all her work in Local Studies, and for her friendship.

This entry was posted on Thursday, November 28th, 2013 at 12:11 am and tagged with Australia, Book illustration, Chelsea, Henley Regatta, Mortimer Menpes, River Thames, Riverside and posted in 20th Century, Chelsea, Painting. You can follow any responses to this entry through the RSS 2.0 feed.
« Amateur dramatics: 1936
Building the Westway 1966 – 1971 »

3 responses to “Mr Menpes on the river”