The villainous cherub, and other decorative features

This is a engraved portrait of William Burleigh (or Burghley), a Tudor politician, Elizabeth  I’s Secretary of State. He was the man who set up her secret service headed by the spymaster Francis Walsingham. He was wily enough to survive the reigns of Queen Mary and Edward VI into Elizabeth’s  time and to die of natural causes. But never mind about Lord Burleigh for the moment, look at all the features around his portrait, particularly the chubby young fellow lounging around beneath the great man. 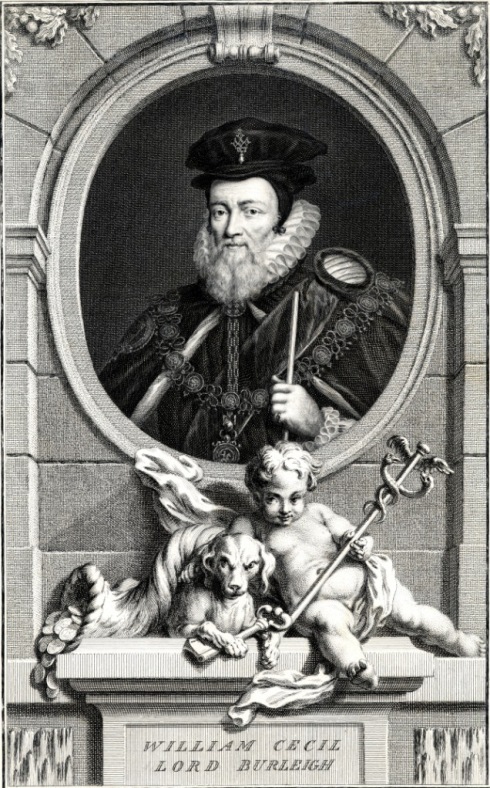 Take a look at him in isolation:

He’s got a caduceus (the staff with wings and two snakes entwined, a symbol of the god Hermes, also connected with alchemy, not to be confused with the Rod of Asclepius which is a staff with a single snake associated with healing and medicine) and a horn of plenty carelessly spilling coins off the plinth. His little dog has a key. The pair of them share an expression I can only describe as baleful, quite unlike the bland face of Lord Burleigh. They look more like fierce guardians than mere decoration. The whole piece looks like a closely guarded tomb.

Scholars of these art works will understand the symbols and conventions of these things better than me so I’ll try not to get bogged down in amateur speculation. I was taken with the villainous cherub and started to look for more pictures in this vein. I might even get to see the evil child again.

Robert Bertie, Earl of Lindsey was Elizabeth I’s godson. He was a military man all his life serving in several European wars. He was 60 at the start of the English Civil War and commanded some of the King’s troops. He died of wounds sustained at the Battle of Edge Hill in 1642. He is depicted wearing armour. Around the portrait are various military symbols – lances, with banners, a helmet, a drum and a sword. The sword has leaves around it and under the drapery are some balls. What’s that rod, or is it a scroll, in front of the helmet?

Edward Russell, Earl of Orford also has a scroll, with some leaves on it (laurel leaves?). He was a naval officer and one of the group called the Immortal Seven who invited William of Orange to depose James II and take the throne. He was later Admiral of the Fleet and First Lord of the Admiralty. The complicated pattern of drapery in the sculpture has a picture of a naval battle. There’s a pattern of scales on the right. The scales of a fish?

George Morley, Bishop of Winchester, a leading man of the church under Charles II, has a bishop’s mitre nestling in the shadows on top of the portrait. The interlocking keys and sword are from the arms of the Bishopric of Winchester. I like the architectural plan unfolding from one of those two books.

Catherine of Braganza, in pseudo-classical dress, sits in front of a pastoral landscape her crown close by, with one hand on a book (denoting learning perhaps) and the other feeding a lamb. On the right edge water flows from a barely glimpsed fountain.

By coincidence perhaps there is another lamb below in a portrait of Nell Gwynne, the King’s mistress.

Nell also sits in a sylvan setting cuddling her lamb. Her dress is skillfully disarrayed  and she has a somewhat languid expression.

These portraits were not always so full of symbols. 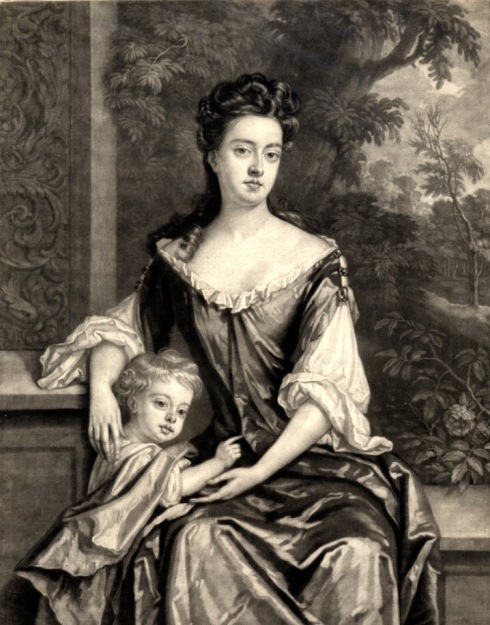 Mary, Duchess of Ormonde is also casually dressed but modestly as befits the mother of Thomas, the young Earl of Ossory. He has a rather grown up face, but quite placid. Once again they sit in front of a lush wooded landscape. The Duchess was the daughter of the Duke of Beaufort and lived in a house near the Royal Hospital.

All of these images seem to have been printed in the 18th century although they depict people from earlier times. This one is from 1754 and shows a contemporary person:

This picture of Lady Ann Dawson (“after a portrait by Sir Joshua Reynolds”) is more specific in its classical references. Lady Ann, the sixth daughter of the Earl of Pomfret (“aged 21”) is shown as Diana / Artemis goddess of the hunt (and the moon). She has a spear and a faithful greyhound.

Don Carlo was the nickname of Charles Fitzcharles, illegitimate son of Charles II, who took part in the defense of Tangier in 1680. During that conflict he drank contaminated water, caught dysentery and died of the “bloody flux”, according to the DNB.  Never a good way to go, especially for a man of 23.

In my quest for the cherub I found some comparatively plain versions of the memorial portrait.

Sebastian (or Sebastiano) Ricci was a Venetian painter who worked in London. Born a couple of years after the young Earl, he lived much longer until 1734. He has the look of a man who has enjoyed life.

By his picture alone the same could not be said for the gentleman below: 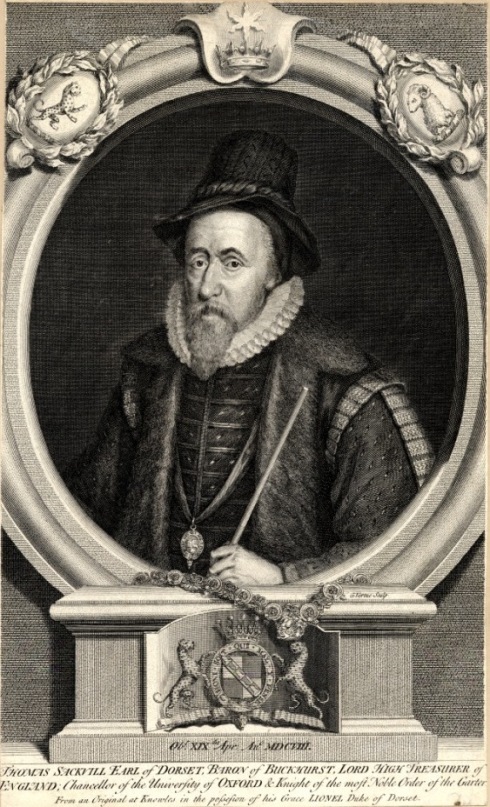 Thomas Sackville, Earl of Dorset looks a little dispirited. He had been a statesman, a poet and a dramatist. He was the son of a cousin of Ann Boleyn and served her daughter Queen Elizabeth and James I. A Chancellor of Oxford University, he also succeeded William Cecil as Lord Chancellor. He amassed a large fortune but he doesn’t seem too happy about it. The DNB speaks highly of him.

Eventually of course I found the cherub.

John Pym was one of the Parliamentarians opposed to Charles I. He died before the Restoration but his remains were disinterred and “despoiled” when the monarchy returned. His portrait is set in an ornate frame and he has a bland expression as if trying to ignore what is going on below him. The cherub himself looks rather less villainous but he is clearly up to something. The caduceus has been dropped on the floor. He lounges on a pair of books while clutching some lightning bolts. He makes an enigmatic gesture with the other hand perhaps restraining his decidedly odd bird companion. Is that a goose? It looks  a bit more predatory than most geese I’ve encountered and looks poised as if about to launch itself into the air like a bird of prey.

So the villainous cherub goes about his shady business and I retire, resolved to keep out of his way in future.

This is one of those posts where I’m a little in the dark about the subject matter but it hasn’t stopped me writing about it anyway. The little cherub caught my interest. I couldn’t help wondering what the artist was thinking. No doubt someone could explain all the symbols.

Lots of people supplied information about the streets in Paddington featured last week, including someone I can ask almost any day so next time we go there it will be a slightly more informed post.

This entry was posted on Thursday, February 27th, 2014 at 12:31 am and tagged with Chelsea and posted in 18th Century, Chelsea. You can follow any responses to this entry through the RSS 2.0 feed.
« Unfamiliar streets: Paddington 1959
Shopping in the 50s: the Kensington High Street experience »

2 responses to “The villainous cherub, and other decorative features”