The secret life of postcards 3: walking around in the afternoon

So that minor point aside I’ve been looking again at the people and details you can find in picture postcards of the late 19th century and early 20th century. The photographers liked to include a few figures to liven up the pictures and it seems passers by took an interest in the work of the photographers. Some of the images are sharp enough to show us a great deal of detail. Enough to get an impression of the people in the pictures, and enough to speculate about their lives if you find that interesting. We recently had a creative writing course at the Library which used photographs from the Local Studies collection including postcards as the basis for writing short stories. You can try it yourself.

It may be my speculation but most of the pictures this week look like they were taken in the afternoon, when middle class husbands were at the office, their wives walked around doing various errands and their children amused themselves.  Like this group of girls strolling together along Holland Park. (The street of that name rather than the park itself).

This group is obligingly posing for the photographer.

Another bunch of sisters taking the youngest siblings out for a walk? The girl on the left is shielding her eyes as she looks across the road at our man with the camera.

Holland Park Avenue, the main drag in this area.

Three young friends out together, a delivery boy from the West London Dairy Company and what about that tall guy? A parcel, or a paper in his hands? 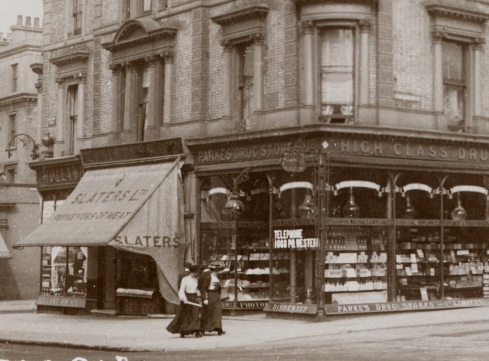 You could make a telephone call inside Parkes.

Holland Park Station is little changed from this picture. A little less signage these days but essentially the same shape. 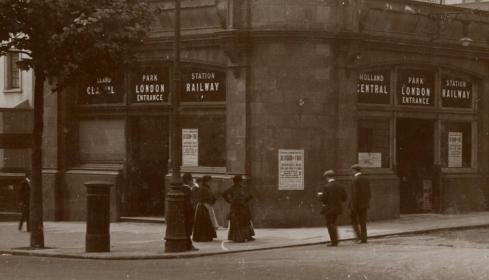 Two women wearing aprons wait outside. Are they meeting someone?

Some postcards haven’t survived very well, like this one of Holland Road:

Chemical decomposition has done its work. But the over exposed effect and the slightly monotonous view makes the main detail the focus of interest:

The mismatched pair of women, one tall, one short. Are they walking together, or is the tall one just passing the other who may have just emerged from that gateway?

This view of Holland Walk has also suffered a little. 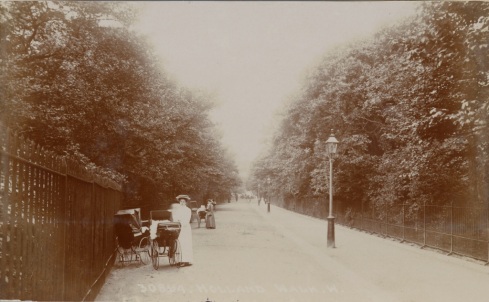 But mothers and /or nursemaids out with children in prams can still be made out: 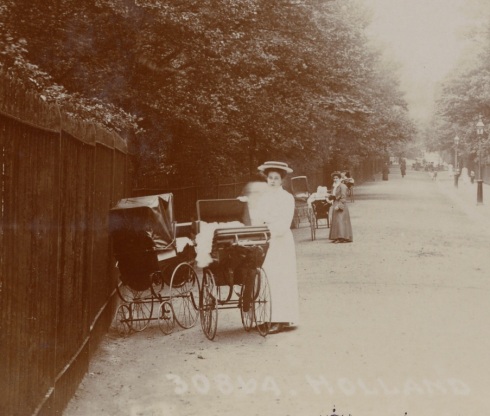 I don’t know why there are more prams than women to push them.The woman’s white dress has lost some definition.

By contrast this view from south of the high street has stayed quite sharp:

I recognized this quiet corner as soon as I came across it. I used to walk this way sometimes on my way to the library.

Now a couple of views of the same building, Kensington High School in Norland Square. 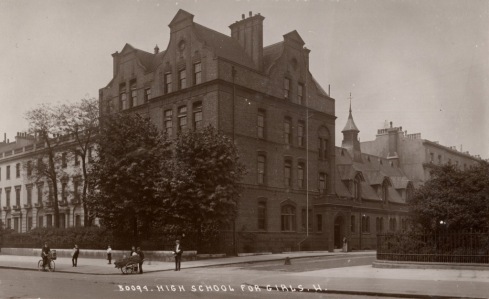 The close up makes the building look much more exotic,  like a French chateau.

A lone woman pauses at the door.

In this view also a close up of a similar picture a different woman waits at the door:

Perhaps she is waiting for the girl in the foreground. A late-comer?  And that dog looks a little weary.

We’ve skirted around Holland Park but in the next picture we’re right outside.

The gates are quite recognizable but at this time remenber, Holland House was a home for the Illchester family and the park was a private estate. Some photographers got inside though.

In this view you can just make out a solitary figure by the house, just a flash of white. 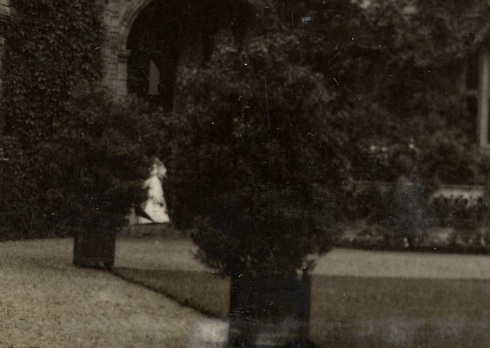 The close up makes thelady barely more visible. This time the photographer was probably there by invitation with the intention of just recording the house. Like in a Victorian Blow-up he catches the image of the woman in white by accident. That’s definitely one for the creative writing group. I had better not go there. Back to the busy streets.

Places to go, people to see.

If you like postcards there are plenty of books full of them. One excellent example is Hermione Cameron’s Notting Hill behind the scenes. Some of the images in Hermione’s book come from our collection. She has a sequel due out in August: Holland Park behind the scenes. This will be one to look out for if you’re a lover of old Kensington.

I had a lot of new readers last week, who set a new daily record of 5169 pageviews on July 4th. So thanks to all of them and to everyone who reads this blog regularly. I really can’t do it without you.

6 responses to “The secret life of postcards 3: walking around in the afternoon”