Mr Griffen in his studio

Although some people liked my post about Francis Griffen back in July as it turned out there still seems to be little known about him. One reader made a comment about buying  some greetings cards featuring paintings by Griffen. I was already aware of this set, of five pictures. They were originally published by a Mr T G Stanton in the 1990s. I think the same gentleman made an offer to buy our Griffen collection about the same time. (We declined. Apart from our general policy about art works, the collection was donated to the Library by Griffen’s widow.) This is one of the pictures:

An autumn night, 1923. A completely finished work, as opposed to most of the pictures in our collection. For me, it is reminiscent of one of  Yoshio Markino’s night time pictures of London.

Griffen liked street scenes showing ordinary life in progress but his other major interest was in industrial settings, and this is also reflected in the set of cards. 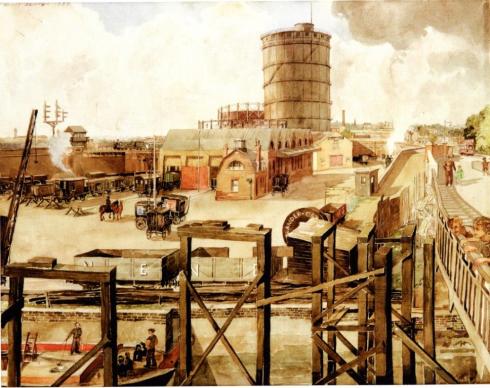 A fascinating view of King’s Cross goods yard in 1937. Note the man on the horse, and the tram just visible on the right.

Griffen’s Chelsea pictures are less finished but just as effective. 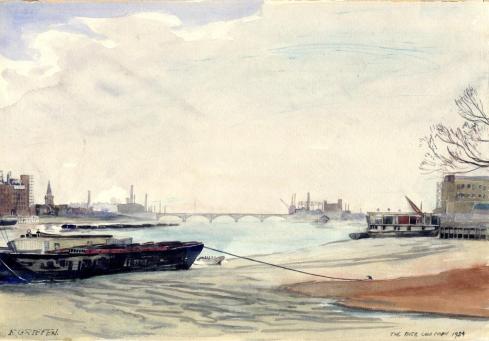 This 1934 view of the river looking west is immediately recognisable with St Mary’s Church and the railway bridge but  Griffen has found an angle which doesn’t include Lots Road power station.

The picture below shows a familiar Chelsea scene in 1935, Sloane Square looking towards the original Peter Jones building. 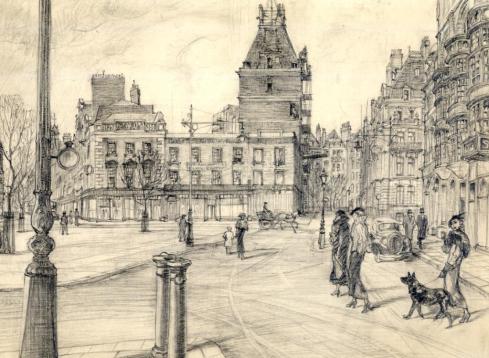 It also features a fine example of a group of one of Griffen’s favourite slinky women. 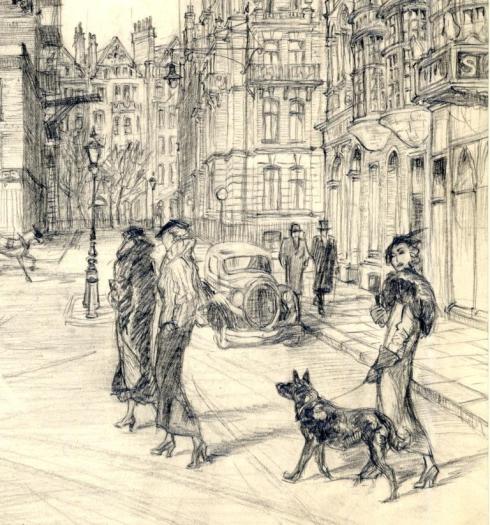 He captures them and the look of 30s fashion in a few pencil strokes. The quite large dog (maybe a German shepherd, or an Alsatian as they used to be known ) is a realistic touch, obviously much more than a fashion accessory. There’s another fashionable woman in this picture.

This is Cheyne Walk looking towards the Old Church. (Incidentally, I’ve had to crop this one a little bit so if the compostion doesn’t look quite right blame me not Griffen)

In the last Griffen post you saw a view of the ruins of the church after the bomb incident that virtually destroyed it. Griffen also recorded the aftermath of another major bomb incident in 1944 at the Guinness Trust buildings in the King’s Road. 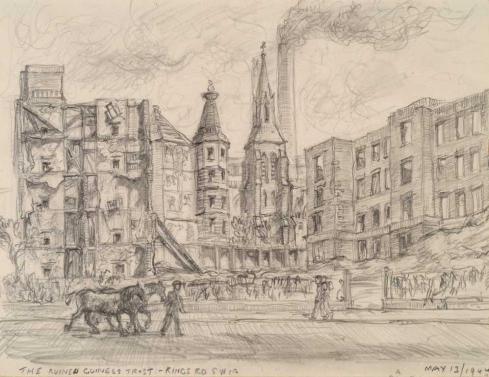 This is a rough pencil sketch of the scene some weeks after the incident which was on February 23rd. A couple of bombs had fallen, one fracturing gas and water mains, the other causing the collapse of housing blocks. 76 people lost their lives that night. A volunteer fireman named Anthony Smith won the George Cross for his efforts in saving people and risking his own life by entering collapsed and flooded basements.

This 1953 etching is a view of a house near the Old Church.

Griffen’s work on the details of the house is quite meticulous.

The next two images show work in progress, two versions of the same basic view. 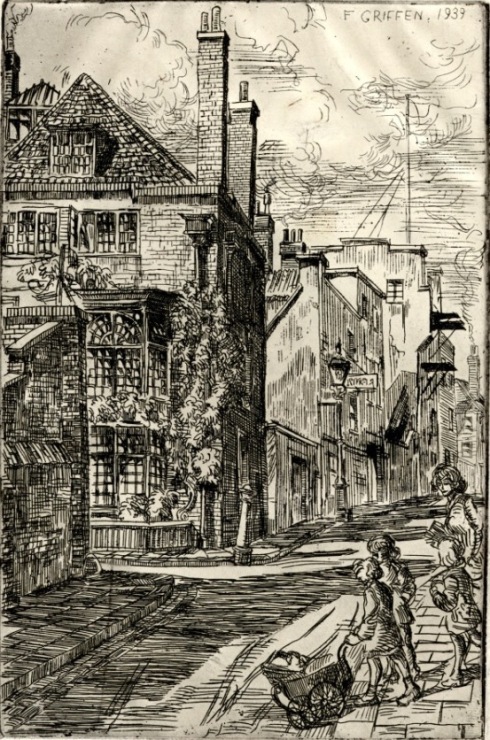 The pictures are both labelled “Chelsea Polytechnic” but this may not refer to the subject, which looks a little more like Old  Church Street to me. They are dated 1939.

This rverside view is called “In Grosvenor Road,1951”, a location just outside Chelsea.

The title of this week’s post promised you Griffen in his studio. And here he is:

A self-portrait of a working artist looking out on his neighbourhood.

Finally, a couple of classic Chelsea images. This is a 1912 picture of a famous sight in Oakley Street. 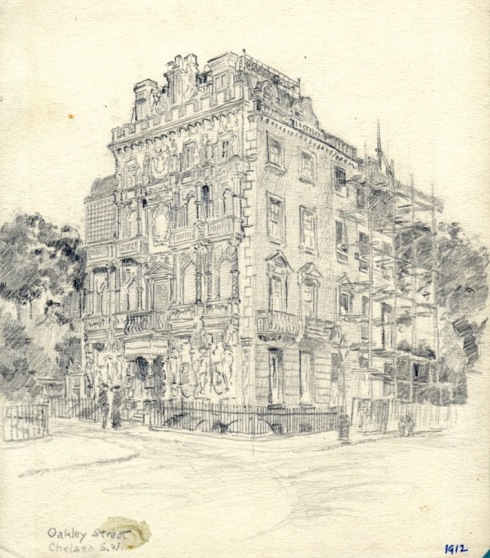 Dr Phene’s house, ten years or so before its demolition.

Another subject tackled by many local artists, Albert Bridge.

Once again I find myself thinking of Yoshio Markino who painted the bridge from a similar angle. This picture is quite large but I wanted to use it so I scanned it in two sections. You can just see a line on the right. I hope that doesn’t spoil the view.

The two greetings cards were published in 1998 part of a set of five by the aforementioned T G Stanton.

I mentioned the reader who made a comment on the last Griffen post to whom I sent a copy of the first image. She mentioned that she had bought the cards in the UK but was now back in Mongolia. I couldn’t help but wonder what Griffen would have thought of his having an admirer who lived so far from his home in Chelsea.

This entry was posted on Thursday, October 9th, 2014 at 12:09 am and tagged with Albert Bridge, Dr Phene, Francis Griffen, Guinness Trust, sloane square, Yoshio Markino and posted in 20th Century, Chelsea, Painting. You can follow any responses to this entry through the RSS 2.0 feed.
« Shepherd in Chelsea
Forgotten streets of Chelsea »

9 responses to “Mr Griffen in his studio”