We’ve spent a lot of time in the last year or so remembering the Great War and I’ve spent time researching what we’ve got in our collection. But it always brings me back to the Second World War,the one that lives in my imagination through my parents and other family members and in the popular consciousness as I grew up. Because of that we’re in no danger (yet)of forgetting those who served whether in the armed forces on the home front. The first war was not without danger for civilians in the cities, but the Zeppelin attacks were nothing like the Blitz. In London and other cities there were volunteer fire fighters, volunteer ambulance crews and volunteer ARP wardens.

This is the post that got away from the Christmas series. I thought of these photographs of volunteers and vehicles at outposts in Chelsea as light-hearted, a mismatched group of amateurs muddling through in a motley selection of uniforms and overalls, the slightly comedic way in which the home front is sometimes portrayed.

Some of our men were outrigged in blue battle dress tonight – with black boots and gaiters. One chap asked me what I thought his looked like. I told him – he looked as if he’d just come out of jail or Borstal!

I scanned these pictures of men and vehicles (1,2 and 4) several years ago when a gentleman brought them in to show me. He had been a schoolboy at the time and told me an intriguing story about a friend of his mother’s, a librarian as it happens, who had the macabre ability to match separated body parts together by sight. He would be called down to the morgue in Sydney Street to consult with the pathologists who had to reassemble victims of bomb blasts.

That was the other side of the home front. You might pose for a picture with your fellow volunteers and smile for the camera. But when the bombs were falling a quite different world opened up.

September 10th
13.30 Bramerton Street fire has broken out again I hear 11 folks are underground. Mrs Castillo’s head has been found. Poor soul.
We heard the Jerry plane has been brought down. During this raid I was caught out in the road on my bike as the plane made a dive, machine gunning. I fell off the bike, fled up some steps in Glebe Place – somebody opened a door and I fell inside.

September 11th
3.47 3 awful blasts from Beaufort Street – God help them. One struck Cadogan House Shelter – one Kings Road and caught gas main. Two terrific fires shot up from the gas. I ran for shelter and then went out to help. More bombs till 5.40 all clear. Lay down till 6.30 then went to Beaufort Street to help in the trouble – did clearing work, stretcher work, counted bodies, messenger work for hours. God! What a day dawning! Peace after a night of hell but what a price! Over 41 poor dead things in that shelter including our own warden Miss Darling whose head was blown in. Stayed there till 12.15. Came home to bath and got to Food Office at 12 o’clock.

In this picture I can’t work out if the two men at the front are acting the business of examining the engine while the others stand in line.

Sept 14th
18.27 (edited) Bomb on Holy Redeemer. Got sent off by Bert Thorpe on bike patrol in Glebe Place and hardly got away when HE sailed through church window through crypt floor to cellar where it exploded…among 80 odd people…..A 20 stone woman blocked the doorway and we couldn’t get her up the stairs….later we got her up with some help from the police but she died…..
Thorpe was under the arch – I rolled him over and saw his face – he had none.. recognized him by his hair, uniform and ring on his hand.. I think my heart broke this night…….

Note the modifications to the headlights on this car, so they hardly gave out any light at all during the blackout. A dangerous time for driving whether you were in the car or a pedestrian.

In the picture below you can see four sniffer dogs used in rescues.

I’m quoting fom the unpublished diaries of Jo Oakman, who worked as a warden and at Chelsea Town Hall throughout the war.

In October 1940 there was much interest in an unexploded bomb nicknamed Ernestine which was sitting in Embankment Gardens. Oakman describes it as “our pet Bomb” The bomb was dug out and “tickled” by 6 “Scotchmen” Oakman found it difficult to understand. Eventually the Scots drilled the bomb and removed its nose. “She” was removed in a lorry but bits of the “ outerwork” given to people. Oakman kept a screw.

Also in October her size six boots were swapped by someone for a size three. She swapped them back and hid them in a house near the post. On the way back :“Got hit across the knuckles by a bit of shrapnel… rather painful”

She was also an amateur artist. This sketch shows the ruins of Chelsea Old Church which was bombed in April 1941 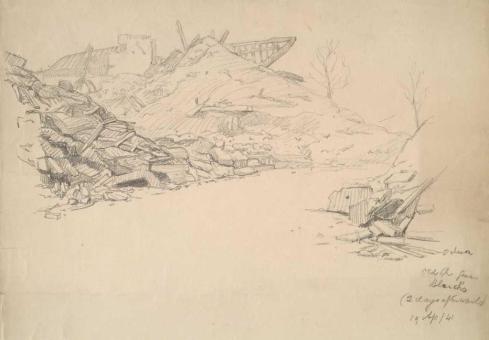 Oakman was out of London when the Old Church was bombed. I looked for an account of the incident in Frances Faviell’s war memoir “A Chelsea Concerto” but found that at almost the same time Faviell’s home in Royal Hospital Road was bombed and she  barely made it out alive, the building reduced to rubble. “there was not a warden, not a soul about – it looked like a dead place – not a sign of life  from anywhere and yet we knew that in many of the houses people were down in their basements unconscious of the horrors above them. I looked down at my legs – they felt cold – and saw that I had no dress below the thighs. It, and my slip had vanished; the top of the black dress was quite whole – but the skirt was gone. The whole of it felt wet and sticky – and I knew it was the blood from Anne’s arm”

Faviell refers to Jo Oakman a few times in her book. She recounts the story of Oakman discovering the body of Bert Thorpe and wishing she hadn’t so she could remember him as he was, and also Oakman’s part in the rescue of Mildred the daughter of Mrs Castillo (mentioned above). The 12-year old girl was trapped for four days in the debris before being rescued. “The first to reach the heap of ruins was Jo Oakman, a doctor’s daughter and a clever painter…”

This view by Oakman is of a temporary bridge erected near Albert Bridge for troops and heavy vehicles. (Some of you will know the famous sign on Albert Bridge instructing troops to break step when crossing. It wasn’t designed for  military work.) 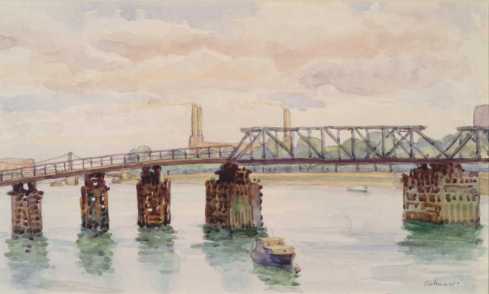 This view from 1947 shows the bridge being dissassembled.

I don’t imagine Miss Oakman is in any of these pictures. But she might well have known some of the people who are, most of them amateurs, who turned themselves into heroes.

(edited) Was on Embankment talking to 2 coppers when 3 bombs came along….the third HE landed in the River near me and blew me down flat. I saw.. a flash of yellow in a red cloud descend into river – followed by a thud, a smack of water and rising foam and the crash of broken glass all around in Cheyne Walk.. I got covered in mud. Ran along Cheyne Walk and found mostly glass all over the road..Reported at Post and it was phoned to CCC with “no casualties”.

Jo Oakman survived the war. This is a painting of the Town Hall decorated for VE Day. 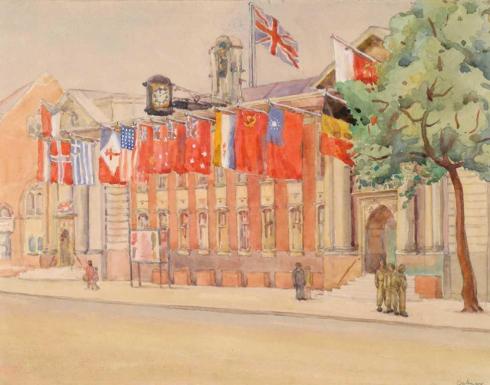 The Library has an ancient photocopy of a transcript of the Oakman diaries made I think by her nephew. All rights for the text remain with the family. Josephine Oakman died in 1970.

The third and final photos, featuring the Auxilliary Ambulance station were donated to the Library in 2010. Thanks to JS.

Jean Darling, referred to in the text was a Chelsea Housing Officer who died when an incendiary bomb fell on a shelter she was supervising in Cadogan House, Beaufort Street. The Council commemorated her in the name of a housing block in nearby Milmans Street.

This entry was posted on Thursday, January 8th, 2015 at 12:08 am and tagged with Chelsea, Chelsea Town Hall, Francis Faviell, Jo Oakman and posted in 20th Century, Chelsea, World War 2. You can follow any responses to this entry through the RSS 2.0 feed.
« Costume Ball 5: more ladies, more gentlemen
Fiction in Kensington and Chelsea 3: Offshore »