This week’s post is in a similar vein to the Secret Life  of Postcards series. I select a picture, then zoom in on some detail, usually a person or group of people. It’s surprising how much of a sense of actual people going about their lives you can get by this simple method. So pardon me for repeating myself, but for me the close examination of photographs never gets old.

This selection comes partly from the glass negative prints of the H and R Stiles company and partly from other paper prints in our collection. They cover a period from about 1890 to 1909. They cover the short stretch of Kensington High Street from the corner of Kensington Gardens to the junction with Kensington Church Street, a distance you can walk then and now in five minutes or less. Even with such a small area I still had about 20 images to choose from including close ups.  I’ll be doing more in another post, going further west down the High Street. Next week I’ll do something different but I’ll come back to this set soon. 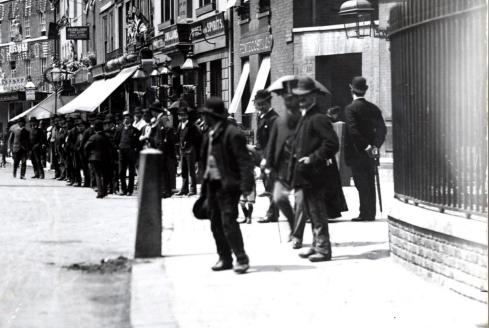 In this picture you’re looking west where a crowd of smart looking men has gathered.

The full picture shows flags over the street and carriages going by. This could be a royal visit to St Mary Abbott’s church whose tall spire towers over the streets like…well it’s like a tall church spire, from an era when churches were some of the tallest buildings in London. Despite the growth of high rise office blocks and imposingstructures like the Imperial Institute, church towers were the great landmarks.

This picture looks back in the opposite direction. I’ve left the reverse writing on the edge of the plate.

In the distance, the trees of Kensington gardens. On the left you can see the Civet Cat, an old inn at the bottom of Kensington Church Street. In front of it is an orderly queue for the number 9 bus. The route in those days went from Mortlake to Romford, so Liverpool Street (you can see the sign on the stairs) was somewhere in the middle of the route.

A few seats left on top, but those ladies might prefer to travel inside. Do you see the man crouching on the narrow balcony?

The view on the other side of the street shows more horse-drawn vehicles and even a couple of hand carts.

The ladies with their  umbrellas up seem to be using them for shade, so this is probably a summer’s day. The men with handcarts are in their shirt sleeves, hot and sweaty no doubt. Look at the lady on the right holding an umbrella. Above her you can see the name Jubal Webb (retail proprieter and property developer ) on the awning. We’ve come across him before. Don’t imagine this is his last mention either, as he seems to have a knack for inserting himself into history.

This is another one for bus lovers:

The bus on the right may be an early form of the number 28, on its way to Fulham. I like the two guys slouching against the shop fronts on the edge of the picture. The one on the left is another 9, advertising Pears Soap and a product called Taunus. Any ideas?

The next image flips around again to look from east to west.

On the left are the substantial premises of Frank Giles and Co, “cabinet makers, upholsterers, auctioneers  and house and estate agents and builders and house decorators” according to Kelly’s Directory. On the right: 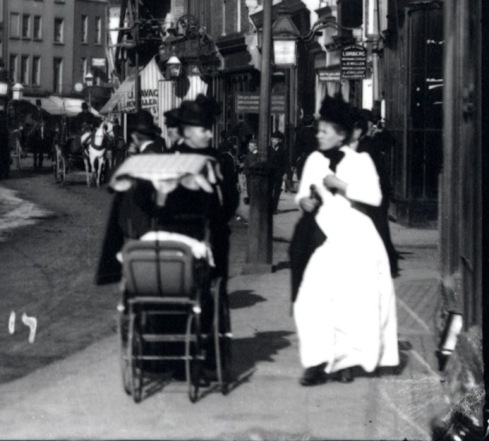 Two ladies having a spirited discussion.

You must be getting use to the change in viewpoint by now.

I’m rather taken with this westward looking picture but mostly because of the detail in the bottom right corner: 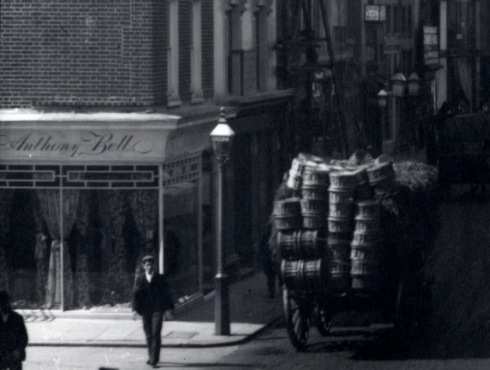 The dangerously overladen wagon seems to hold no fear for the young man walking past Anthony Bell’s establishment on the narrow side street to Kensington Court.

The next picture almost seems to have been taken seconds later.

There is a similar wagon full of baskets and straw, the same shop front on the right, and another view of the shop of H and R Stiles (“art photographers [side door]”). But let’s look at the group at the bottom right.

And zoom in again.

An eldely lady with a cadaverous face, and behind her a pair of fashionably dressed women. I also like the  woman on the left facing away from us, checking her hair in a timelsss gesture.

I’ve become fond of some of these people you can only see in fleeting images. This picture is a good one, a paper print, looking east towards the Royal Garden Hotel.

There are a couple of familiar names on the shop fronts- Keith Prowse and Budgen. This is about 1909 so it’s a few years later than the others but it contains possibly my favourite back view of people standing in the street.

These two women are wearing the slightly more modern and extravagant fashions of the Edwardian era. What intrigues me most is the similarity of their oufits combined with the disparity in their height. 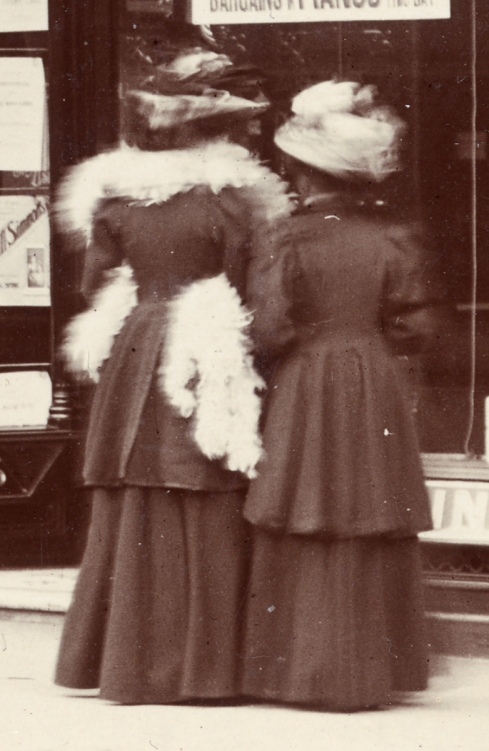 I imagine them intent on what’s in the shop window and talking intensely about that or some other matter of interest but this is all we’ll ever see. We’ll never get them to turn round and say a few words. We’ll need an actual time machine for that. But if that time ever comes, we’ll know where to go.

Thanks to Matthew, my transport correspondent who covers bus-related matters for the blog.

In today’s (Tuesday’s) Guardian is a piece about the reissue of Roger Perry’s book about 70s graffitti, The Writing on the Wall. http://www.theguardian.com/artanddesign/2015/feb/03/the-writing-on-the-wall-1970s-pioneers-of-british-graffiti.  Inspired by the original edition I wrote a post about graffitti in Kensington and Chelsea here.

This entry was posted on Thursday, February 5th, 2015 at 12:39 am and tagged with H and R Stiles, Jubal Webb, kensington, Kensington High Street, Photographs and posted in 19th Century, 20th Century, Kensington. You can follow any responses to this entry through the RSS 2.0 feed.
« Forgotten Buildings: Scarsdale House
The Cancer Hospital »