The last couple of posts have been a bit of a departure from my recent blog activity, hanging around Kensington High Street. We’re back on track this week moving across Wright’s Lane from Scarsdale House to a forgotten group of buildings called the Terrace.

This is the southern side of Kensington High Street between where Boots is now, and Hotel Chocolat, or in 1978 the Adam and Eve pub which was then just to the west of the covered entrance to Adam and Eve Mews. You could get lost looking at shop names like Scotch House, Barratts, Jean Machine, Salisburys, Saxone, Dorothy Perkins and..er..Saxone (two of them, with different shop fronts?), and by all means do that. We’ll have a further look at the 70s shops of the High Street on another occasion but I wanted to show you this picture to say that’s all relatively modern stuff. It was built by our old friend Jubal Webb in the 1890s. The Survey of London with its usual ear for a telling phrase describes the Promenade as it was originally known as “an orthodox, restless, ornamental range  of shops and flats”. This tells you what you need to know (and it’s why I keep reading the small print in the Survey). I see those buildings every working day from the bus stop opposite and have become fascinated by the repeating pattern of the roof line.

But before the Promenade was the Terrace:

The Terrace (or the Terrass as it was known in the 1760s) emerged piecemeal between the 1690s and the 1840s, a series of houses which grew together over the years. So not a classic terrace as we know them today but one of the first blocks of dwellings to have that term applied to them. The Survey also tells us that the original houses were “as commodious and respectable as any of their contemporaries in Kensington Square”. (We’ll get there another day.)

I used a couple of pictures of the Terrace by the H and R Stiles company in a previous post. This is number 1:

(If you do look back at that previous post you’ll see a crucial difference between the picture I used then and this one. ) Numbers 1, 2 and 3 were the oldest, dating back to the early 1690s although a little altered over the years.

This is number 2 and number 3. 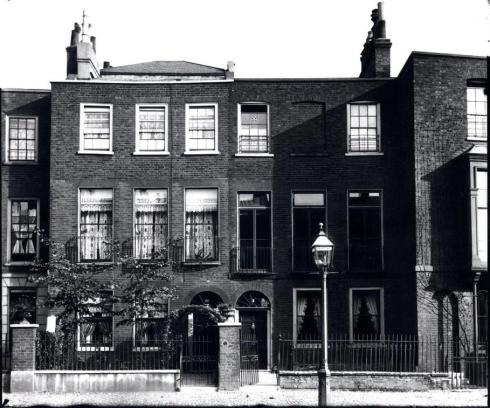 The windows looked a little mismatched and the people at number 3 have left their gate open. The lamp post has the word Kensington above the light indicating that it was provided by the Kensington Vestry.

The slightly ramshackle quality continues as you go along the row.

Number 4 seems to have confusingly varied facades and more than one entrance.

Number 5 is a smaller house but still the work of Richard Beckington, the builder of the others.

This was the home of the highly regarded Punch illustrator John Leech who died there in 1864 at the age of 47 after “a laborious life..the victim of overwork and an organisation morbidly sensitive to the small worries of town life, of spasm of the heart” according to Wilmot  Harrison in Memorable London Houses (1890)

A slouching youth lends some character to the photograph.

During the 19th century there was work on the facades and the gaps between the original houses were filled in by additional structures and some smaller houses. Other occupants of the Terrace included Sir Henry Cole and the artist David Wilkie.

However, I think the most interesting aspect of this group of houses is not what you saw from the High Street but what lay behind, where there were extensive gardens almost the length of Wright’s Lane and for the most part hidden behind high walls.

The steps took you down into a large space where you could find some impressive trees.

This one is a mulberry. 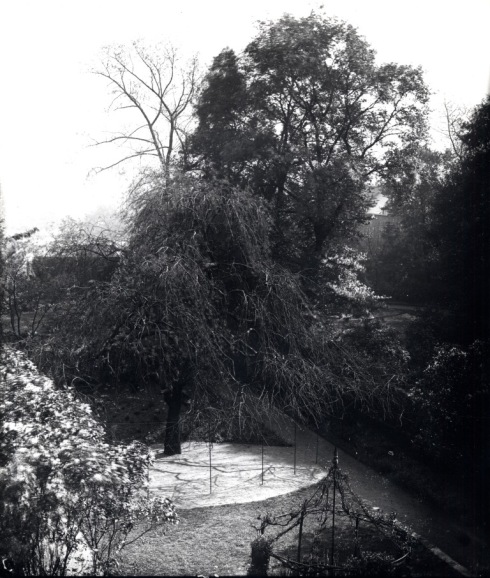 This is a willow. Like at Scarsdale House these gardens show another kind of lifestyle. Their inhabitants enjoyed seclusion and leisure in large open spaces a little like those of the grand houses of Campden Hill.

There was also room for sport.

Is he trying to hit the gardener? Luckily he seems to be serving underarm.

You could of course just sit in your tranquil garden like the couple on the left.

Wait a moment. Who’s that?

It’s that man again, Jubal Webb, cheese magnate and owner of number two. Webb was a local vestryman and property developer. A slight hint of sleaze surrounds him but London was built in part by ambitious entrepreneurs like him. He does seem to have a gift for publicity though, and for sneaking in when you least expect him.

That would be it for the Terrace, except that I went looking for the original version of that panoramic view above and found it, more than a yard long.

It’s signed by Richard Stiles and dated 1892. At one end is a slightly clearer view of the woman in black I mentioned in the glass negative post. 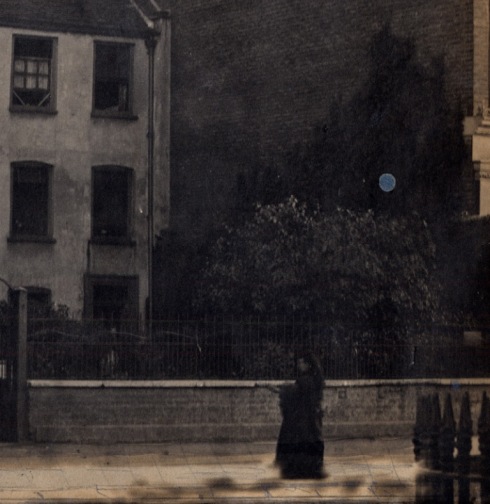 Now that I’ve looked at a slightly clearer version I think she might be wearing a hat, which would make all the difference to her appearance and the conclusions you might draw about her. The condition of a print can completely alter a photograph, especially when you are dealing with details.

And at the other end there is a better view looking down Wright’s Lane, showing the shops on the corner.

You can see people heading down the road past the walls of Scarsdale House and in the foreground a slightly indistinct woman with a child in a pram is standing outside an early version of Derry and Toms. The lady with her back to us on the left is window shopping, her head hidden in the shadow of the awning on which the name Ponting’s can be seen. It’s another one of those images you’d like to step inside and have a look around.

Once again I have benefited from close scrutiny of the relevant Survey of London volume. Along with the information I have also collected some descriptive phrases which are one of the pleasures of the Survey.

Next week I’m taking a week off as we have a guest blogger.

This entry was posted on Thursday, February 26th, 2015 at 12:50 am and tagged with Derry and Tom's, John Leech, Jubal Webb, kensington, Kensington High Street, photography, Ponting's, The Terrace and posted in 19th Century, 20th Century, Forgotten buildings, Kensington. You can follow any responses to this entry through the RSS 2.0 feed.
« Manufactured in Chelsea
Haigh – A handsome stranger arrives at your hotel »

4 responses to “Forgotten buildings: The Terrace”