Do you remember the Albert Memorial being enclosed?

This curious tower of scaffolding came about as as result of a decision to repair and restore the most famous monument in London. A dangerously large section of lead had fallen from the canopy in 1983. After that, although it took some time for a final decision to be made, it was clear that some extensive work needed to be done. It took place over a period of several years and the restored monument was unveiled in October 1998. 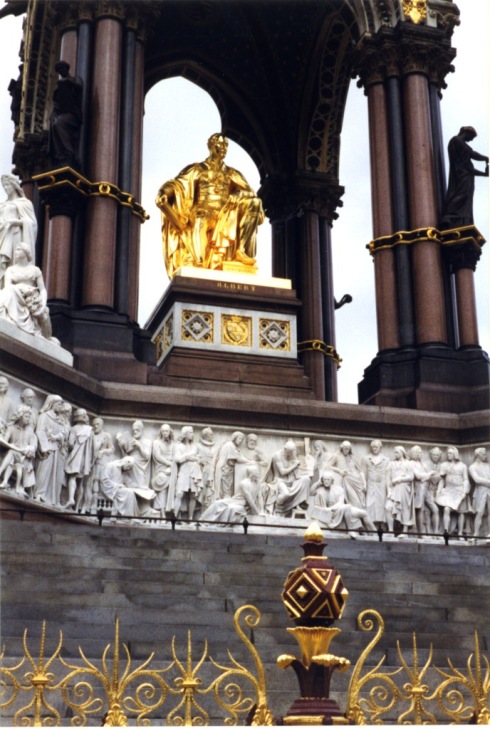 The restoration brought the memorial back as far as was possible to how it looked in the 1870s. The statue of Albert had been gilded again. My wife and I went down there at the time to take a look at something neither of us had ever seen, having grown up with the black version of the statue. (The gilding was removed during the First World War. The story goes that it was feared the gilding might provide a shiny target for Zeppelins, but it seems more likely it was a result of increasing pollution damage.)

But let’s go back to the beginning.

Albert, Prince Consort, husband of Queen Victoria died in 1861. The Queen was devastated by her loss, and the nation consumed by her grief and its own, along with a certain amount of guilt at not having appreciated Albert and everything he had done. The 1851 Great Exhibition was indentified with Albert and the work he had done for his adopted country. A national memorial to Albert would best be sited near the site of the Exhibition and also close to the complex of museums and educational establishments in South Kensington that was already known as Albertopolis. Funds were raised and a competition for the design established.

The outstanding design was by the presiding architectural genius of the day George Gilbert Scott. Scott is well known to us now as the creator of a number of iconic buildings such as the Midland Grand Hotel at St Pancras Station.

A giant statue of Albert seated under a gothic canopy

The memorial is a complex structure supported by a massive steel cross with an undercroft.

And an elaborate support structure.

Massive pieces of stone were assembled on the site.

An overhead crane moved the sections of sculptured stone around.

All these pieces were slotted together under the direction of Scott and the builder John Kelk.

The structure grew, under another layer of scaffolding.

This picture shows the memorial before the statue was installed in 1875. The original sculptor,Carlo Marochetti, had produced different designs for the statue, all unsatisfactory. He then died and they had to start again with another sculptor, John Henry Foley, who had created one of the surrounding groups. The absence of the statue of Albert makes you look more closely at all the other sculptures, representing the continents, the arts and sciences, the virtues and a host of famous men. We’ll have a closer look at them next week but just for now let’s say that Albert was placed in the context of all the arts and sciences of the 1860s.

The finished monument in the 1880s, magnificent, grandiose or sinister?

The memorial became a fashionable spot to be seen, as in this 1870s illustration of fashions on the steps of the memorial. 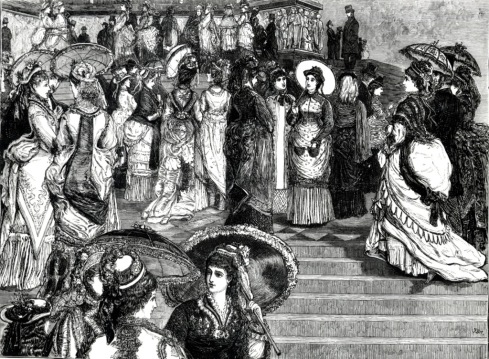 Our old friend Markino depicted the same steps some years later, with a slightly thinner gathering of fashionable Londoners.

It could be argued that perhaps as the monument aged and suffered the ravages of city life, the Victorian taste for excess in decoration, and the Gothic style itself began to seem dated, and odd. Over the weekend I happened to watch the Jonathan Miller film of Alice in Wonderland, which was designed to look like the photographs of that era. Alice is another product of the 1860s, feverish and fantastic. I don’t want to labour the comparison but it may be that hallucenogenic quality shared by Alice and Albert which captured the popular imagination again in the 1960s when we began to appreciate Victorian taste again

When it was clear some major repair work had to be done in the 1980s the possiblity of dissassembling the monument for good was briefly considered. But not seriously  I think. London loves its strange monuments, and remembers that the memorial exists because these two individuals loved each other. 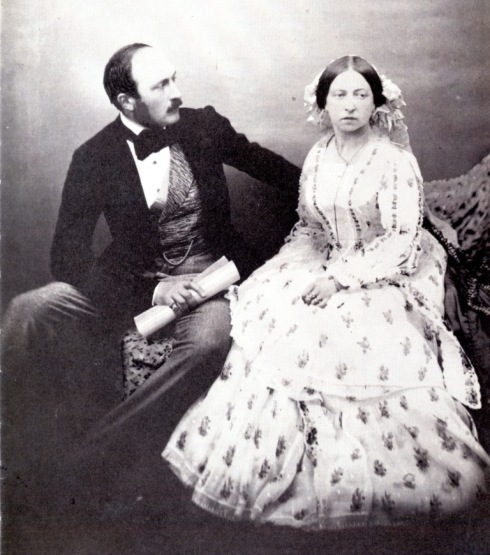 And of course we have a lot of interesting material in our collection including some images not often seen. So I hope you’ll let me off. Especially as I found so many pictures that I decided to do a second post next week devoted to the surrounding sculptures.

The two books by Chris Brooks about the memorial were invaluable to me with this post. The first image of the covered memorial is from the 2000 book. Photographs 2 and 3 are by Maureen G Stainton and are copright by her. The picture of Victoria and Albert is by Roger Fenton. All other images are from the Local Studies collection.