After the interest in the post on Royal Court Theatre posters I had a look at our other collection of theatre posters, for the Finborough Theatre, a smaller establishment which is nevertheless a significant outpost of theatrical life in Kensington and Chelsea.

Once again I have to give you a disclaimer that I know almost nothing about theatre so I have simply chosen posters I llke. 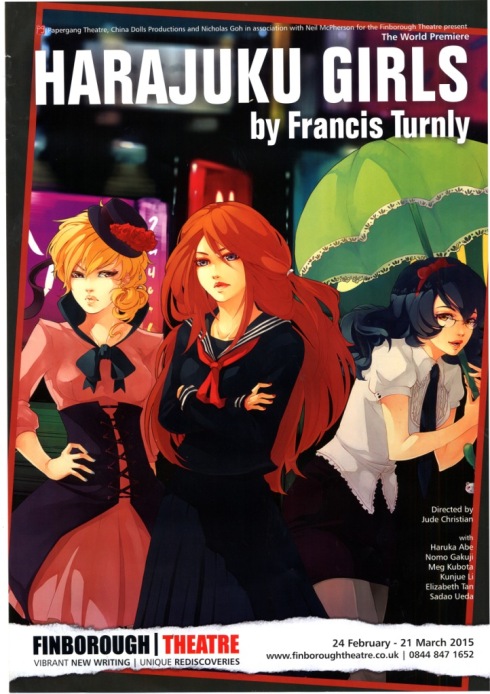 You know I like Japanese stuff so that’s a good start. Three Japanese girls, Mari, Yumi and Keiko, contemplate their future in night time Tokyo.

The art of the theatre poster is an old one, possibly as old as the theatre itself. I’ve come across  examples in the Local Studies collection of posters and handbills ranging from the detailed announcements of the programmes at the Cremorne Gardens to events at the smaller establishments in the Borough. You’ve seen some examples by John Hassall in another post. The modern theatre poster which anyone who travels in London cannot fail to have noticed is the continuation of a long tradition.

The theatre poster designer sometimes works with photographs of the cast or the sets but mostly has to come up with unique images which convey the nature of the production and catch the eye in different sizes, displayed on walls or (much reduced) in magazines and newspapers.

Here are some examples which caught my eye, from a collection of posters recently donated to the Local Studies collection.

A musical sequel to Peter Pan set on the eve of World War 1.

A revival of a 1979 Broadway production in which a Jewish man and an anti-semitic Polish officer meet in Paris and share a car to flee the Nazis while competing for the affections of the same woman. 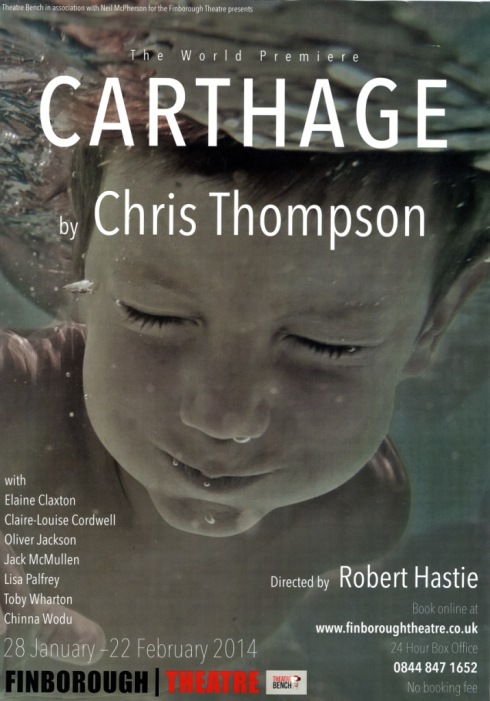 The death of a boy in a young offenders unit. 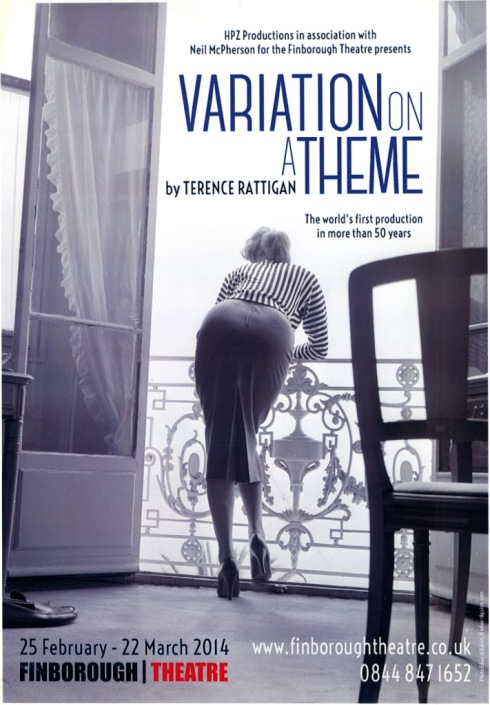 A Terence Rattigan revival (of a “forgotten classic”) which featured Rachael Stirling.

I was drawn to this one,also a revival,  because I’d read Boyle’s autobiography A sense of freedom (1977) years ago, and seen David Hayman’s portrayal of him on TV in an adaptation of the book. Boyle spent years in the Scottish prison system eventually ending up in a special unit at Barlinnie Prison where he turned to art and literature. The Hard Man was first produced in 1976.

A child protection officer searching the internet for child pornography which takes its toll on him, hence the main image of a figure trapped in a TV.

A family drama about dementia and terminal illness. 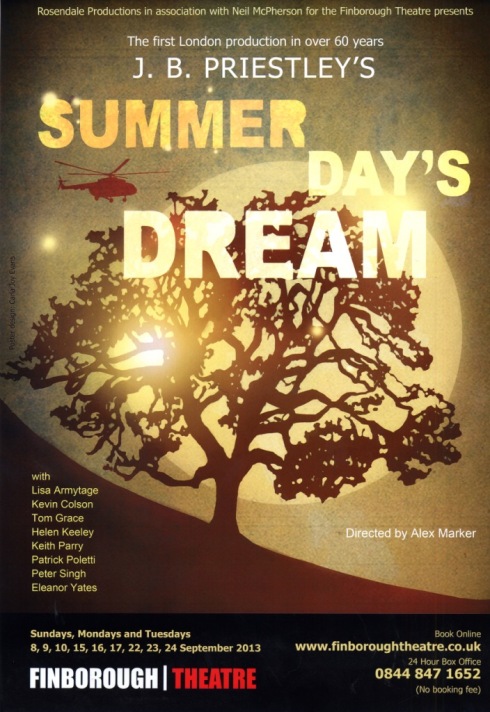 A revival of a play first performed in 1949, a post-apocalyptic story about an agrarian existence interrupted by outsiders from the wider world.

A play which links soldiers in Afghanistan with a child in the UK.

A captive woman confronts her killer.

The famous German dramatist explores the outbreak of World War 1 through  the medieval mystery plays and the charcater of Death. 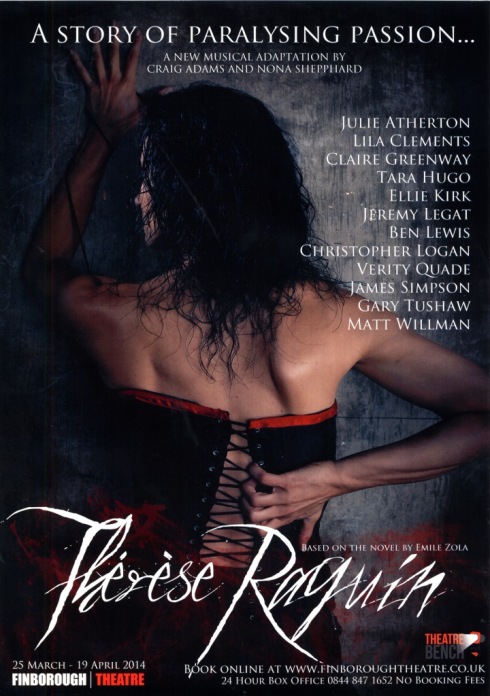 A musical version of the Emile Zola novel of adultery and murder. I of course remember the TV adaptation with Kate Nelligan 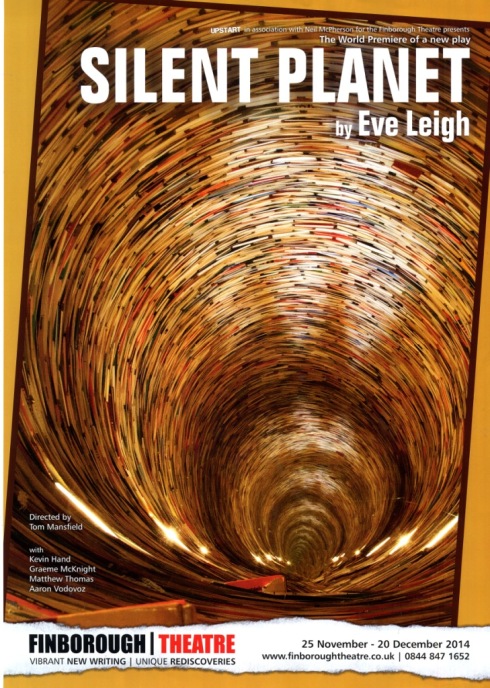 A detainee in a Russian mental hospital and his interogator share the world of literature. 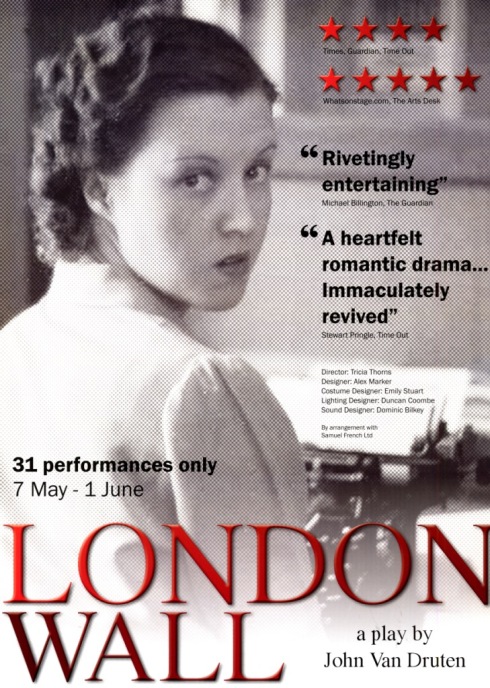 A drama of office life first performed in 1931, this show was transferred as other productions have been to another theatre . (I had to crop the image slightly.)

The Finborough Theatre was founded in 1980 above the Finborough Arms pub, Finborough Road. It has been presenting new writing and reviving older plays ever since. It continues to provide an astonishing variety of theatrical  experiences inside an innocuous building at the junction of two streets in the southern end of Kensington/Earls court.

Thanks of course to the Finborough Theatre for donating posters and handbills to the Local Studies Collection. I can’t write anything very insightful about the productions themselves but I am delighted by these images and glad to have them and others in our collection.

This entry was posted on Thursday, September 24th, 2015 at 12:33 am and tagged with Finborough Road, Finborough Theatre and posted in 21st Century, Kensington. You can follow any responses to this entry through the RSS 2.0 feed.
« Bignell and women – models, friends and strangers
Charles Conder’s bohemian days »

One response to “Finborough Theatre Posters”