Okay, I made the name up. Nobody ever called a few streets in North Kensington by that term. You’ll see what I did by their names: Faraday, Telford, Murchison (named after scientists and engineers in 1868) They’re all much altered since 1969 when most of these pictures were taken, especially Murchison Road which has pretty much ceased to be. (There’s another one, Wheatstone Road which is now little more than a stub). After identifying the former home of the Raymede Clinic in the post on Ladbroke Grove I was looking at some pictures of the streets  running east off Ladbroke Grove with some interested parties and we started talking about the streets named for scientists. 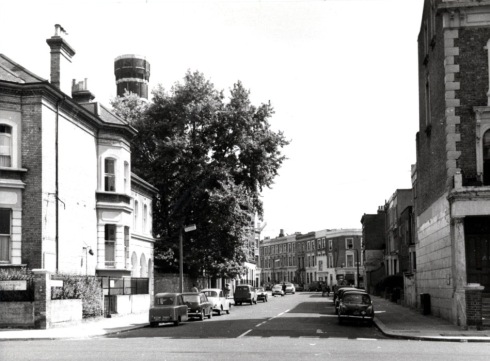 The clinic is on the left and the picture is looking down Faraday Road. The tower you can see above the lush foliage belongs to the old fire station. Can you see the small vehicle on the left at the end of the row of parked cars? I believe it’s an invalid carriage, an example of the small, three-wheeled, under-powered “cars” which disabled people could get at the time. I don’t know much about the arrangements involved in the issuing of these institutional looking vehicles (they were the same all over the country). I can remember from my brief time in the motor trade that some people regarded them as death traps, especially when it was possible to adapt regular cars for disabled users. However some users must have liked them.

Before we go any further, and see some more curious vehicles, let’s have a look on a map. 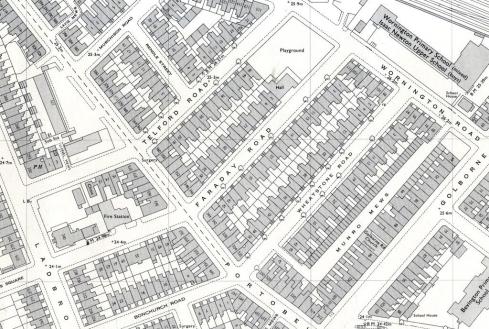 As you can see both Telford and Faraday Roads were longer in 1971 (the approximate date of this Ordnance Survey map) and Murchison actually existed.

At this point the rough photo itinerary I had worked out called upon me to work my way up Faraday Road but I had to stop to work this picture out.

It took me a while to workout from the description “looking west from Portobello” that this picture shows the rest of the fire station (see the glimpse of the tower on the right) and that the buildings visible in the centre at the end of the  street are on the other side of Ladbroke Grove and according to the map must be part of the Church of St Pius X.

I’ve let myself get sidetracked so now let’s get back to the plan and carry on east up Faraday Road.

I can’t resist this view of what I think is a 50s or 60s Volkswagen sports car with a wary boy peeking out at the photographer. As usual I would welcome extra information from motoring buffs about any of the cars  in the pictures. Is this a Volvo? 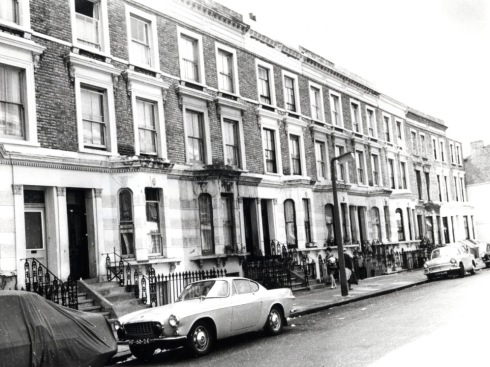 The cars may be flash but there’s a general air of dilapidation about the houses. In 1969 W10 had not even begun the process of gentrification. The building below, Christchurch Hall was described as “disused” by the photographer.

The actual Christchurch had already been demolished. The empty lot became one of the incarnations of the Notting Hill Adventure Playground. You can see the fence in the picture below.

A couple of boys are playing in the street, a sign that this end of the street where it met Wornington Road was a relatively quiet area.

If we walk round the playground we’re looking down Telford Road.

Once again there’s a certain amount of confusion as the picture is captioned “looking east” but with the playground on the left I think we’re looking west.

This is the corner of Portobello Road and Telford Road.

J A Cook are listed in Kelly’s Directory for 1969 at number 373 Portobello Road. You can see the number 371 next door along with some excellent billboards. (Another ad for Harp lager which must have been ubiquitous at the time)

Kelly’s also lists at number 1 Telford Road the London Transport Canteen. Hence the buses and their crew in this picture.

It was taken in June 1970. You can see Trellick Tower under construction in the distance rising above the remaining terraced housing. Note that truck with a long pole or plank in the back, and then here it is looking in the other direction, parked next to the Eagle public house. 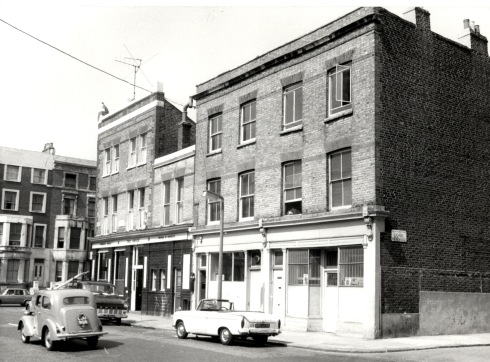 The canteen is in the building next to the pub.  I can’t quite make out the manufacturer’s name on the back of the convertible The little car in motion looks rather older than 1970 too. Any ideas?

Incidentally. Kelly’s tells us that next door to the canteen, at 3 Telford Road was Hy Soloway, ladies tailor (you can just make out some photos by the door and also on the premises (basement or upper floors) was Hauer and Co, doll’s wig makers. A niche service if ever there was one. I have cropped a larger version of the image. The lettering on the canteen door is just visible.

Having satisfied my idle curiosity we have to make our way back up Telford Road and then up to Murchison Road. 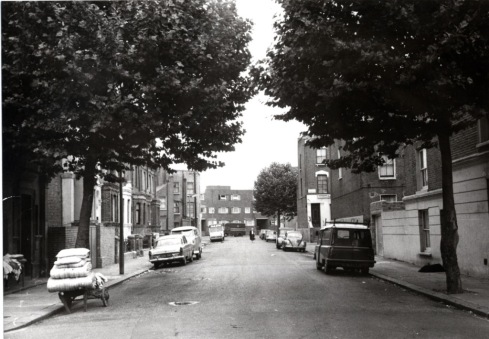 The bundle of material on the cart could indicate the presence of a rag and bone man working the street. Murchison Road was shorter than the other two and ran between Portobello Road and Wornington Road as they converged and met in an intersection with Ladbroke Grove. There were only about 20 houses in the street.

A line of old British cars headed by a bug-eyed Ford Anglia, not one of Ford’s cooler models.  I haven’t cropped out the detritus in the foreground  because it could be more evidence of the rag and bone man, or his horse at least.

This is a view looking west.

That’s the same shop and line of cars but we can now see on the other side a Triumph Spitfire (I think) and a truck telling us that we need Pink. Pink what?

Here is a final view of Murchison Road.

A clean looking Volkwagen camper and two people either just leaving or just arriving at their homes, a young girl and a man (or just his arm). She must be in her 50s by now. I did once meet a customer who appeared in one of these survey pictures as a child so I’m always hoping another person will come along and say “it’s me”. It’s not as unlikely as you might think.

I was pulling pictures and information together as I wrote so I’m quite surprised that it was reasonably coherent in the end. My thanks to Sue Snyder who asked me to scan some of these and to Maggie Tyler for starting me off at the Raymede Clinic. I don’t think the Science District will ever catch on as a name unless an estate agent takes it up.  As I mentioned the street names were all adopted in 1868 by the Kensington Vestry.

Michael Faraday (1791-1867), physicist,chemist and pioneer in the study of electricity

This entry was posted on Thursday, January 7th, 2016 at 12:42 am and tagged with Faraday Road, Murchison Road, Telford Road and posted in 20th Century, Kensington, North Kensington. You can follow any responses to this entry through the RSS 2.0 feed.
« Costume Ball 6: mothers, daughters and others
What Estella saw »