`In 1965 a woman died in an old house in Palace Green, a house she had lived in all her life. The house had once been the laundry of Kensington Palace but her parents had just been looking for a pleasant family dwelling. The houses around it had become grander (and more valuable) over the course of the 20th century but for Estella Canziani her house was the family home and garden she had always known.

Estella had done many things in her life. She was a writer on travel and folklore (and local history), a campaigner for the RSPCA and RSPB,  a book illustrator and painter. She painted landscapes, portraits, animals and costumes but what we’re looking at today are paintings of her home and the places around it. What Estella saw were gardens, trees, small animals and rooms full of objects.  She wrote a memoir of her life in the house, her travels and her charity work called  Round about 3 Palace Green (Methuen, 1938)

Here is her garden: 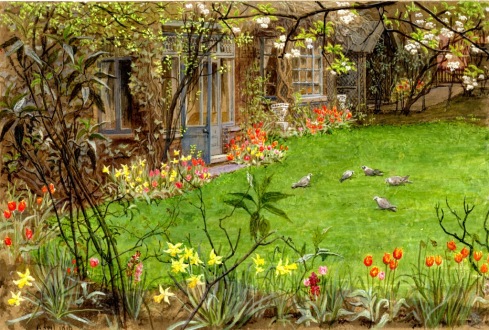 Estella, encouraged by her parents had a fondness for birds, particularly pigeons and had several as pets. She also had many friends among the birds which visited the garden including pheasants and a parrot.

The rear view of Mr Clementi’s house in nearby Kensington Church Street.

The colours of the plants and flowers are what immediately caught my attention. “Flowers on walls have always fascinated me and some of my earliest memories are associated with them.”

Estella’s mother was also a painter.

Louisa Starr, who was born in Liverpool of American descent married an Italian engineer called Frederico Enrico Canziani. Estella reports that her mother dreamed of an ideal house and recognized it while driving in Kensington Gardens, seeing a board up advertising it to let. She telegraphed to her husband to come back from Paris and they secured the property just five minutes ahead of a gentleman who was also waiting for the office to open. Estella was born there two years later.

The photograph of Louisa in the studio she had built in the courtyard comes from a feature in the Ladies Field of about 1900. This photograph from the same feature shows the garden in Estella’s picture. 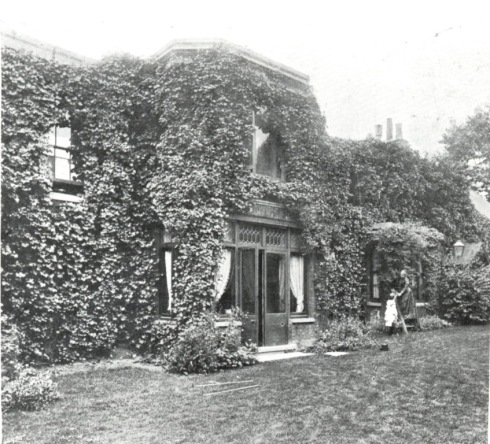 Is that Louisa on the stepladder with Estella beside her? Estella is said to be aged 13 in the article which describes her as inheriting her mother’s talent. The young Estella was often around artists. She remembers being kissed while in her pram by Lord Leighton and of visiting him at “his beautiful house in Holland Park Road.” “He gave me rides on his shoulders about his studio to the Arab Hall and fountain…He showed me the stuffed peacock at the foot of the stairs and also the beautiful tiles on the staircase…”

Louisa often signed her paintings with a little pictogram of a star. Estella adopted this motif with the addition of a C. You can see this in the picture of a window at the house below.

More plants on walls. The Ladies Field describes the house as ivy-covered. Below Estella is a little older than in the previous picture, seen with her father. 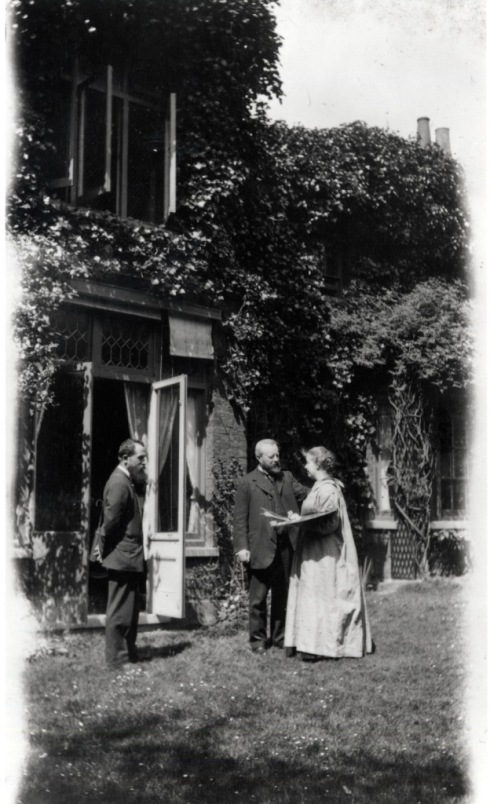 She is wearing her artist’s smock and carrying a plaette so the picture is posed but the affection between them is quite apparent. The identity of the superflous man standing by them is unknown. The precision of her work can be seen in this line drawing entitled Mulberry trees in the garden at Palace Green.

Estella had been told that Queen Victoria had picked mulberries from the two trees in the garden.

Animals and birds, particularly pigeons frequently feature in Estella’s pictures. This one shows the Paddock in Kensington Gardens. 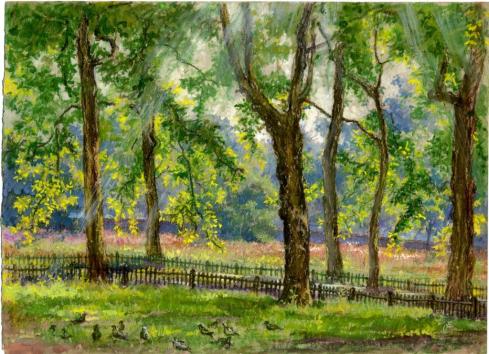 This view at dusk is looking  from Kensington Gardens, westwards I think.

The distant light of the setting sun, and the frantic activity of the squirrels recalling Rackham’s furtive faeries. Estella painted several fairy pictures influenced by European folklore. Her picture the Piper of Dreams of 1915 was much reprinted and became very popular during the war. In her memoir she recalls being told by Philip Lee Warner of the Medici Society that they had sold 250,00 copies in the first year. There was a signed edition of a thousand (at 2 guineas each) – “the old man who looked after me while I autographed them sat me at a table and passed one to me at a time…he watched carefully to see that I was not getting tired and writing badly and after every hundred gave me a rest…He had worked for Leighton, Burne-Jones and many other artists and explained how he had watched each on to see that their signature was perfect.”

The picture below, of the sunken garden in Kensington Gardens also has an unearthly quality, like an illustration to an Edwardian fantasy.

We’ll be back at Estella’s house again soon I think. There are many more things to see.

On an unrelated matter:

On Sunday, a courier handed me a package containing David Bowie’s new album Blackstar. Thanks to the practices of a certain online retailer the album’s tracks were already on my MP3 player although I hadn’t heard any of them yet. This is a contrast with the arrival of the first Bowie album I received in the post, The Man who sold the World which came to me in a large cardboard packet from the first incarnation of the Virgin empire back in the early 70s. I had heard all the tracks on the album on a late night programme on Radio Luxembourg. After listening to it I remember walking down the wide road near our house feeling…. something, not quite realising that the world had changed and that David Bowie would be with me for the rest of my life.

You get more emotional as you grow older I’ve found and quite banal things can move me to tears these days but I was surprised on Monday morning at quite how upsetting the news of Bowie’s death was. I was sad when I heard the news of John Lennon’s death but I was still young and cynical then so I got over it quite soon. I don’t know how long it will take me to regain my equanimity this time. I didn’t play Blackstar on Sunday, there was too much to do. Now I wish I had, so the first time I do play it, it won’t be with the realisation that this is the last word.

Bowie was one of the cleverest pop stars. It’s so like him to deliver one final surprise.

This entry was posted on Thursday, January 14th, 2016 at 12:33 am and tagged with Estella Canziani, Faeries, Kensington Gardens, Louisa Starr Canziani, Palace Green and posted in 19th Century, 20th Century, Kensington, Painting. You can follow any responses to this entry through the RSS 2.0 feed.
« The Science District: some streets in W10 1969-70
East and west on Southern Row: 1969 »

13 responses to “What Estella saw”