Dulac and Shakespeare: faeries and phantoms

The first two decades of the twentieth century are sometimes referred to as the golden age of book illustration. It was a combination of skilled artists, advances in printing techniques and a book loving public willing to buy prestige or gift editions of classic books. We’ve already featured examples of this in posts about the artist Hugh Thomson who tried to produce one “big” book a year in the pre-WW1 period. Hodder and Stoughton were one of the publishers who embraced this trend, and one of their lines was a series of new versions of Shakespeareare plays. Thomson himself did As you like it for Hodder and later the Merry Wives of Windsor for Heinemann. W. Heath Robinson did Twelfth Night. And our new friend Edmund Dulac did one of the best illustrated editions, the Tempest. 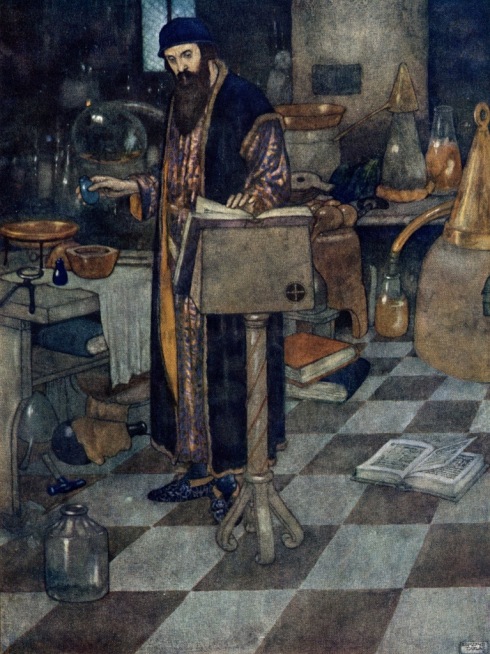 Prospero in his magical laboratory when he was still Duke of Milan. I have read that Dulac tended to depict not so much the action of the play as scenes implied or referred to such as the “rotten carcass of a butt” in which Prospero and the infant Miranda were set adrift which was nevertheless  equipped with “rich garments, linens, stuffs and necessaries” courtesy of the noble Gonzalo, not to mention volumes “from my own library that I prize above my dukedom” (grimoires etc, perhaps, or something on child rearing).

Another is these Dulac mermaids presiding over a line which was echoed in another famous work by T S Eliot. (A Kensington and Chelsea resident we haven’t got around to yet.) 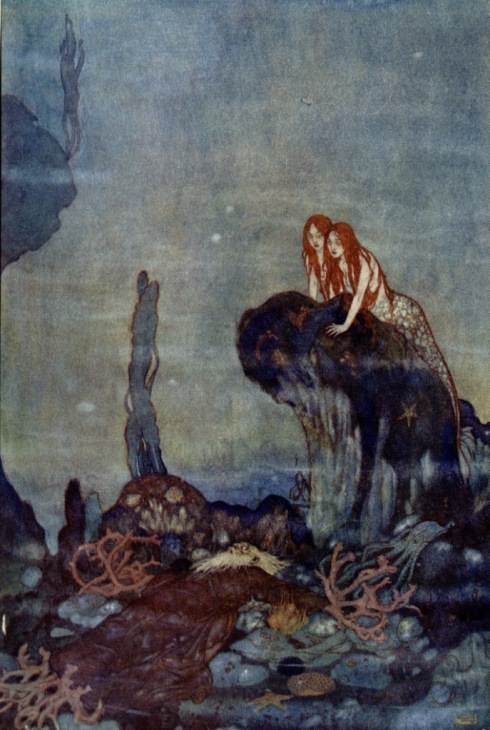 On the apparently deserted island Miranda had to be home schooled, and when the play starts is a teenage girl. 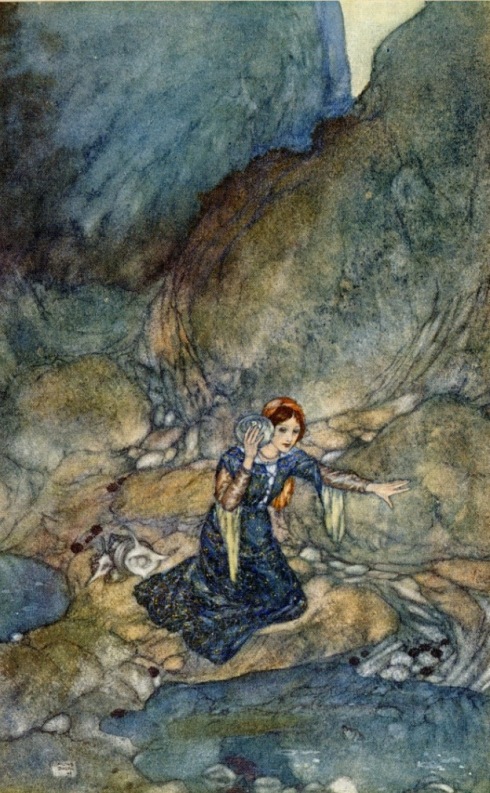 “No woman’s face remember but my own” The only other inhabitant of the island is the monstrous Caliban the half-human son of a witch who had also been exiled to the island. Caliban is Prospero’s unwilling servant.

Propero uses his magical powers and those of his faery servant Ariel to capture a ship and move some of its passengers and his former associates into his sphere of influence.

Caliban refers to other non-human residents: “the isle is full of noises, sounds and sweet airs, that give delight and hurt not.”

On the other hand the scene below does occur on stage with Ariel in the guise of a harpy. 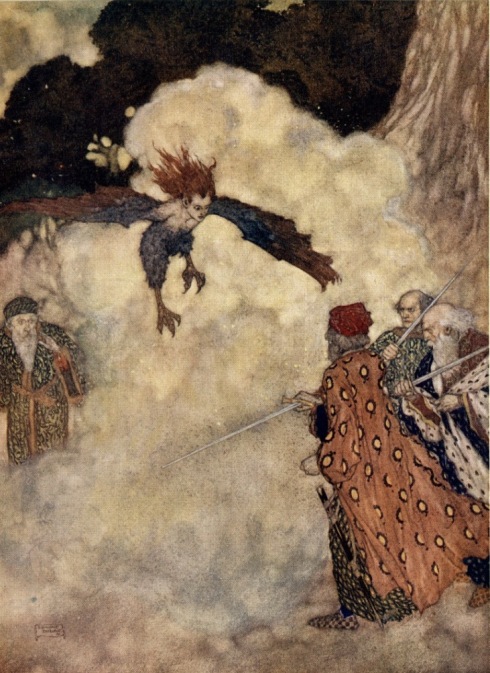 He/she harangues them: “You are three men of sin, whom Destiny, / that hath to instrument this lower world /and what is in’t, the never surfeited sea / hath caused to belch up you, and on this island / where man doth not inhabit – you ‘mongst men / being most unfit to love. I have made you mad.”

On another part of the island Miranda has met Ferdinand and they have rapidly become a couple. After a stern warning about making sure his daughter remains a virgin Propero entertains the couple with a pageant of spirits. The Goddess Iris speaks of “turfy mountains, where live nibbling sheep” 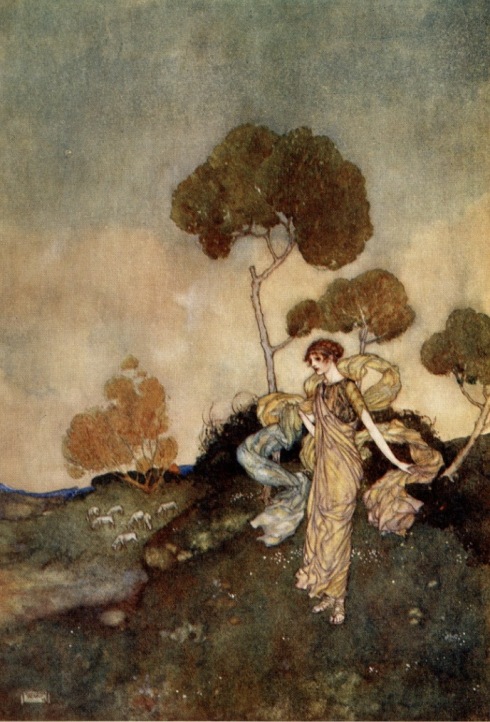 She calls for: “you sunburned sickle-men, of August weary / come hither from the furrow and be merry;/ make holiday; you rye-straw hats put on, / and these flesh nymphs encounter every one / in country footing.” 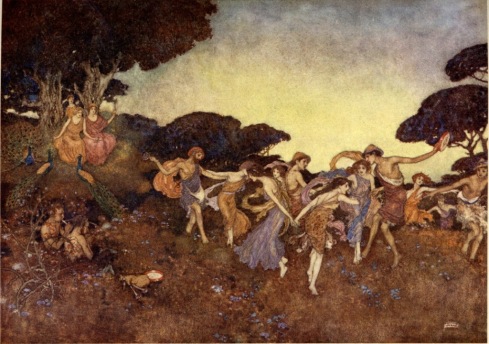 After the fun Prospero dismisses the spirits and prepares to face Caliban and some of the hostile visitors to the island. There are mant famous phrases in the play but at this point Prospero utters the most well known: “We are such stuff as dreams are made on...

These much quoted words were featured quite effectively in that Ikea advert for beds. Do you remember that one? “…and our little life is rounded with a sleep.” 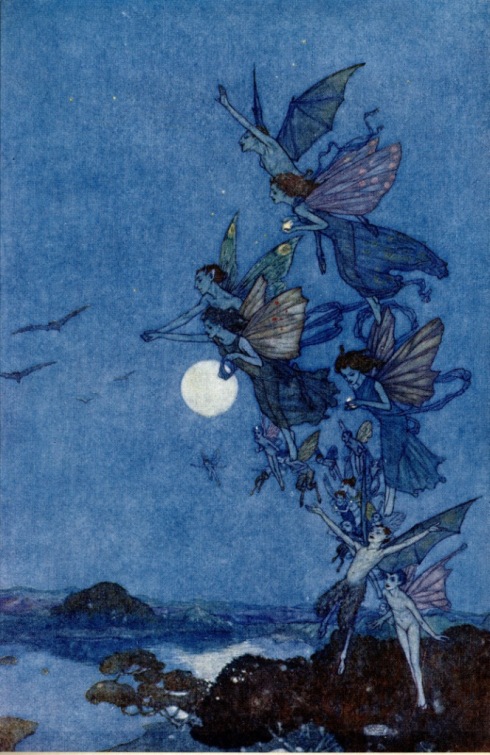 …..you demi-puppets that by moonshine do the green sour ringlets make..”

Prospero speaks of the darker side of his powers: “…Graves at my command / have waked their sleepers, oped and let ’em forth/ by my so potent art”

But at the conclusion of the play he promises: “But this rough magic I here abjure….I’ll break my staff….. I’ll drown my book….”  and vows to set Ariel free.

“On the bat’s back I do fly

And finally, returning his visitors to their ship Prospero promises “calm seas, auspicious gales, and sail so expeditious that shall catch your royal fleet far off.”

Dulac picks up on that image for a final picture. 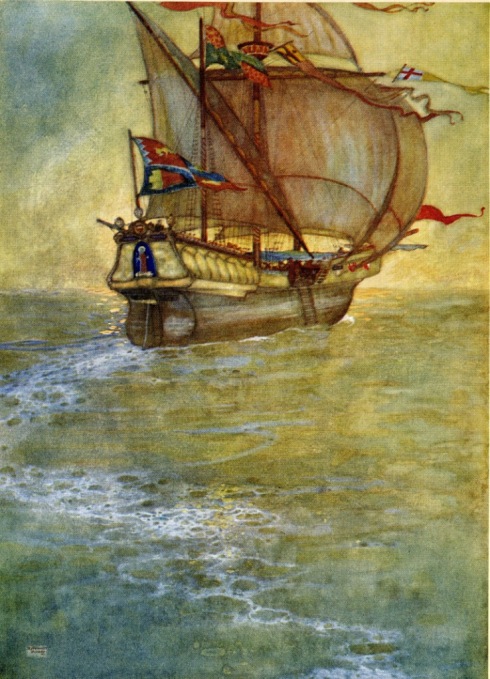 There have been many versions of The Tempest, on stage, as an opera and as a general influence. I happened upon this one:

Elsa Lanchester as Ariel, with Charles Laughton as Prospero in 1934. Elsa Lanchester went on of course to play her most famous role the following year in one of the most fantastical of Universal’s horror films, the Bride Of Frankenstein. As well as the Bride she also played Mary Shelley in the film’s prologue.

But naturally this film is the most memorable later version of the story for me.

But you already knew that I’m sure. Forbidden Planet (1956) featuring Robby the Robot as himself/ Ariel, Walter Pidgeon as Morbius/Prospero, the young Leslie Nielsen as Commander Adams, a kind of Ferdinand (not to mention an early model for James T Kirk) and Anne Francis as Altaira / Miranda. Caliban came in at the end as the monster from the Id.

Or there’s this one:

[Neal Gaiman’s Tempest, from the Sandman series, the Wake. What would Dulac have made of graphic novels?]

I’ve looked at some other illustrated Shakespeare volumes from the Hodder series – W G  Simmonds’s version of Hamlet, Sir James D Linton’s Merchant of Venice, but they looked rather conventional after Dulac’s Tempest.I’m going to keep looking.

As well as tying in with the previous post on Dulac this one also occurs in a Shakespeare anniversary year. In November one of our London History Festival author events will be Shakespeare related. But before then I’ll be featuring a couple of those special editions. Look out for them.

This post has a companion piece on our WW1 website where you can see some pictures from Dulac’s book in support of the French Red Cross.

Thanks to Peter Collins for loaning the Dulac volumes and Kim for transportation.

This entry was posted on Thursday, February 11th, 2016 at 1:03 am and tagged with Book illustration, Edmund Dulac, Faeries, The Tempest, William Shakespeare and posted in 20th Century, Kensington, North Kensington. You can follow any responses to this entry through the RSS 2.0 feed.
« On the border 2: the edge of Kensington 1971
Speed kills: St Ann’s Road 1971 »

One response to “Dulac and Shakespeare: faeries and phantoms”