Louisa’s album, and other memories of an ancient house

Louisa Boscowen Goldsmid’s album is a threadbare scrapbook with a stained fabric cover. Inside it are a set of watercolours. 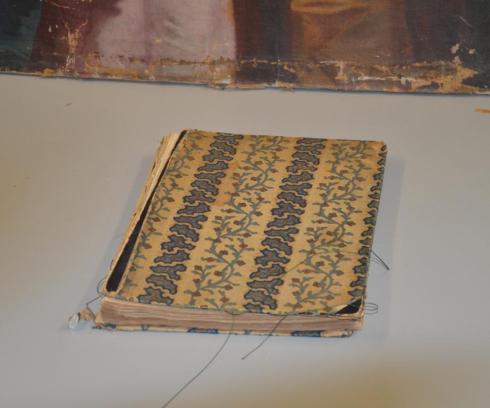 Mrs Goldsmid was clearly an amateur but like other amateur artists featured on the blog what she lacked in technique she made up with a kind of quirky charm, and a sense of atmosphere. Louisa lived for a short time at Aubrey House. 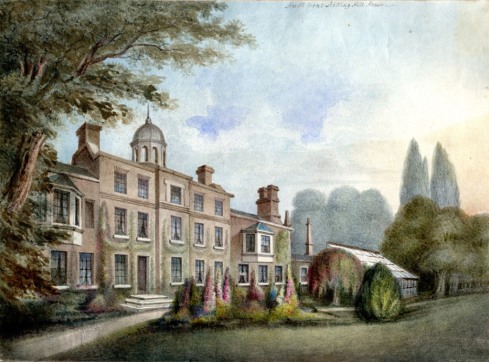 This is the house in 1893. Some young members of the Alexander family pose listlessly on the rear lawn. Louisa  was still alive by then but she belongs to an earlier period of the house’s history. 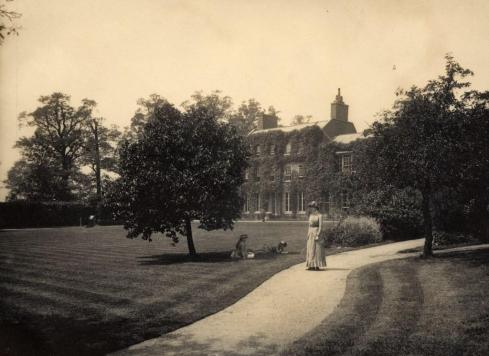 Aubrey House was built in 1698 by a group of doctors and apothecaries as a spa. There was a well nearby among the Kensington gravel pits (a more picturesque spot than the name implies) which provided mineral water, a fashionable drink at the time (“a famous Chakybial Spring ” according to John Bowack’s Antiquities of Middlesex). The spa house became a private residence under the name Notting Hill House. It was the home of the eccentric albino Lady Mary Coke who did a great deal of work on the extensive gardens. She departed in 1788 after which a series of tenants lived there

In the 1790s the  house became a school for young ladies. From about 1808 Philip de Visme occupied it moving from  a house in Putney Heath considered to be too lonely and unsafe for younger members of his family

Louisa Goldsmid was one of his grandchildren. She had  married  Mr Goldsmid in 1809 aged 28 but spent time at Notting Hill House with her three children in 1817 and 1818. She painted a number of exteriors and interiors. This was the White Room: 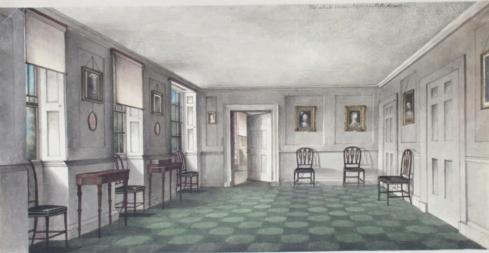 Mrs Goldsmid’s pictures are noteworthy in our collection because they depict the interior of the house as fully furnished and inhabited (which doesn’t always happen in pictures of late 18th/ early 19th century interiors).

Here in the pink room Jane de Visme poses with her harp. 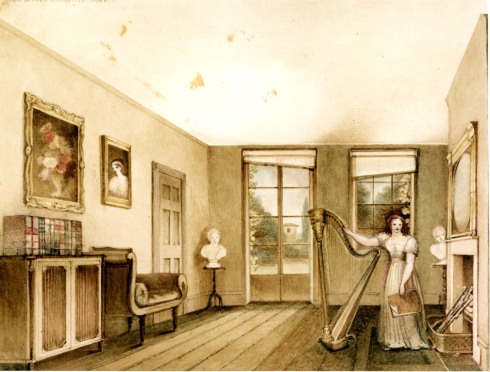 Nothing on the table as yet in the dining room but a couple of the younger residents wait hopefully: 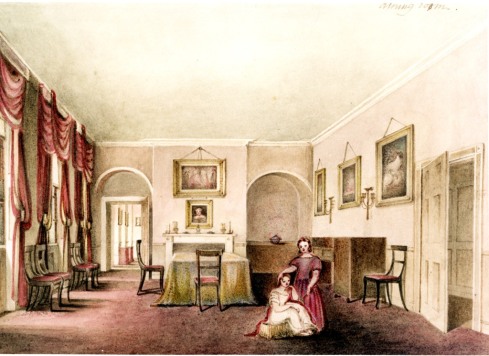 It must be admitted that things look a bit dull in the nursery. 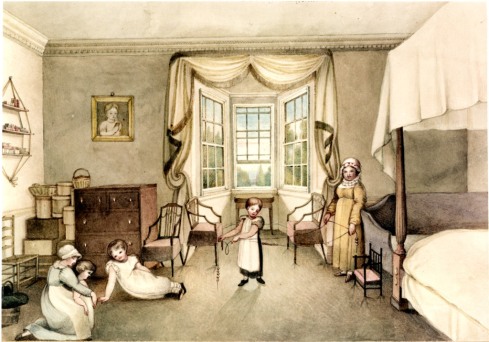 But the children seem to have found  better amusements in the gallery. 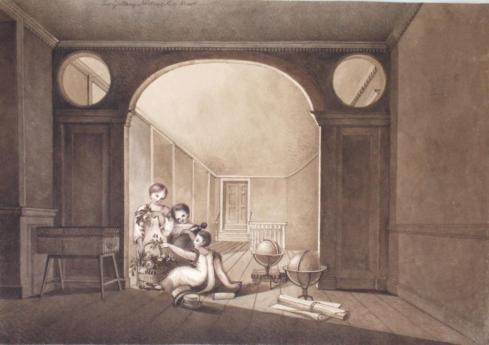 The children are lounging around at the top of the house, away from parental interference. 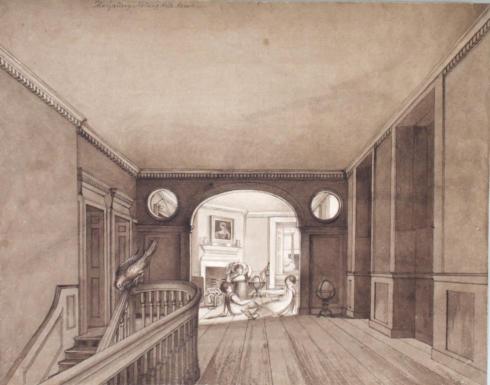 With a parrot on the lookout. Downstairs, the ladies engaged in more elegant pursuits. 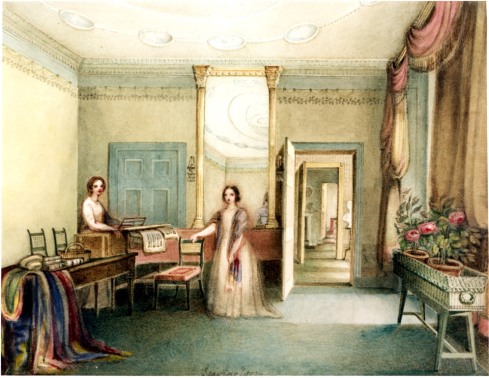 The picture itself is quite elegant with the ceiling design reflected in the tall mirror, and a pair of open doors showing the rooms beyond.

The de Vismes had left by 1819. Other tenants and owners followed. From 1830 to 1854 the Misses Emma and Caroline Shepheard ran another school for young ladies at the house. Miss Euphemia Johnston (one of the pupils) sketched them “in mysterious conference” in 1853. 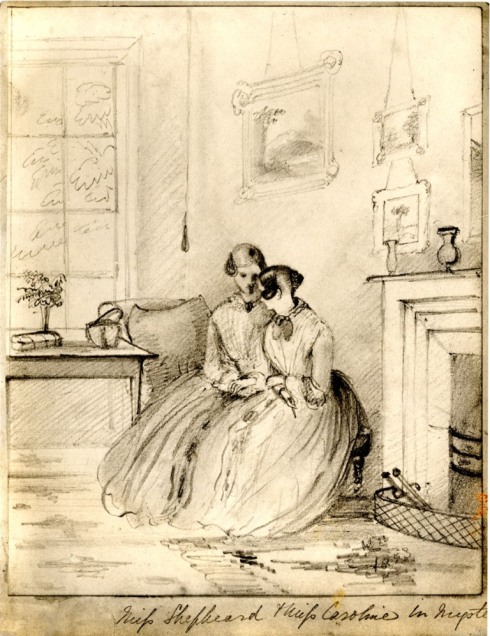 Florence Gladstone who wrote a history of Aubrey House reports that the picture “bears little resemblance” to the “very attractive”sisters.

This picture, also by “Effie”, shows the students hard at work. 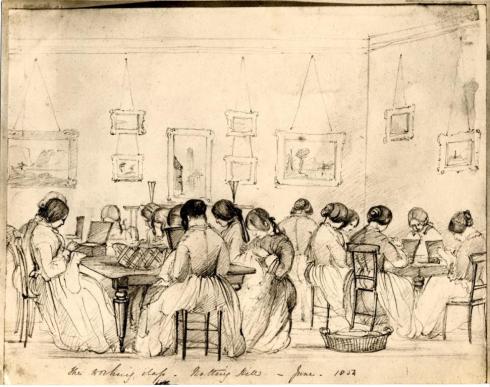 Heads are bowed, work baskets are open, and possibly a couple of laptops on the right.

After the sisters the property was sold and the grounds “somewhat truncated” according to the Survey of London (who were refused access to the property during the preparation of their volume on Northern Kensington). This was the period when the name Aubrey House was adopted. In 1873 the house was bought by William Cleverley Alexander. The house remained associated with his family for nearly a hundred years. 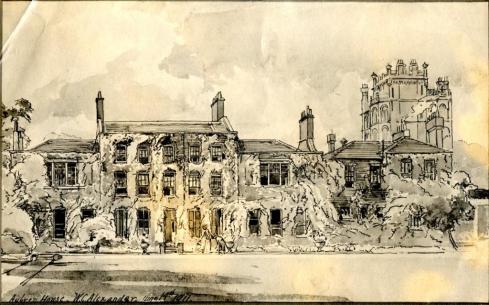 Mr Alexander was also an artist. This view of the house includes the famous structure known as Tower Cressey , visible on the right (covered here). Other members of the family were also amateur artists. One of them has been featured  on the blog before (see the post here). Another member of the family painted this  view of the more crowded Victorian interior: 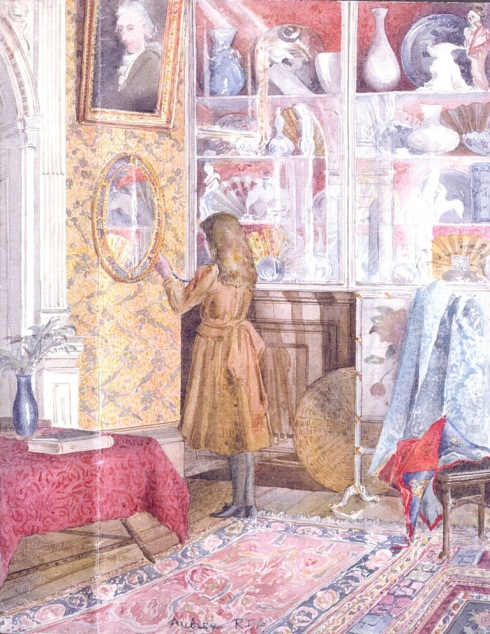 Maybe even this one, Jean Alexander, photographed in 1906. 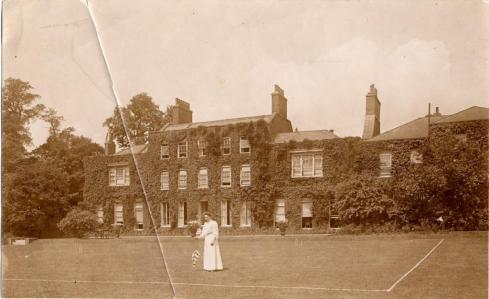 Or one of these two ladies walking in the garden. 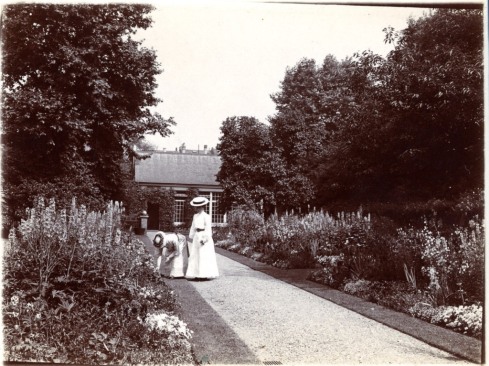 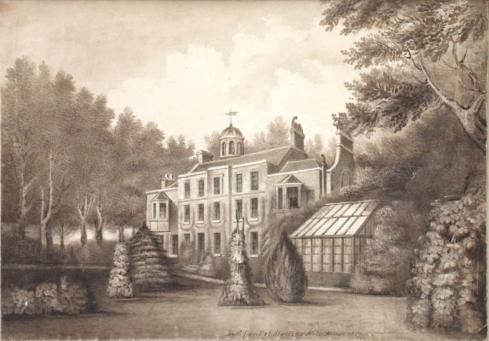 I first had a good look at the Goldsmid album while some researchers were looking at the history of Aubrey House for a forthcoming book, which I await with interest. In the meantime I thought the time was right for a look at Louisa’s pictures, although as it turned out, that was just a jumping off point. We will return to the further contents of the album at some point in the future. 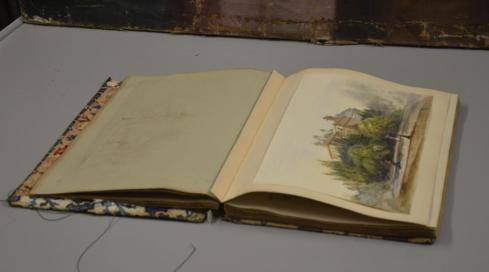 Florence Gladstone’s book about Aubrey House is a bit of a confusing read so I hope the facts and quotes I’ve extracted from it are accurate.She also wrote the first history of North Kensington, Notting Hill in Bygone Times in 1926.

Posts about two of my other favourite watercolourists , Marianne Rush and someone we only know as the Artist of the Red Portfolio might also be of interest.

The computer that was giving us grief has now been restored to a semblance of its former self so we can scan again. Thanks to K. I’ve still got drafts of a couple of odd posts which I may still use.

This entry was posted on Thursday, May 26th, 2016 at 12:35 am and tagged with Aubrey House, Louisa Goldsmid and posted in 19th Century, Interiors, Kensington, Painting. You can follow any responses to this entry through the RSS 2.0 feed.
« Backwaters 2
Now you see it, now you don’t..now you see it again »