The 1911 edition of Richard Brinsley Sheridan’s A School for Scandal  was one of the first of a series of classics illustrated by Hugh Thomson  in a larger format. Preceded by the Merry Wives of Windsor (1910), it was followed by She stoops to conquer (1912) [pictures from both here] , Quality Street (1913) and the Admirable Crichton (1914). Although intermittently troubled by illness during this period Thomson had hit a sweet spot, and was peaking in his art.

School for Scandal took Thomson back to his favourite time and place, 18th century London, which he had explored before in his illustrations to Fanny Burney’s Evelina. This time he was back in colour: 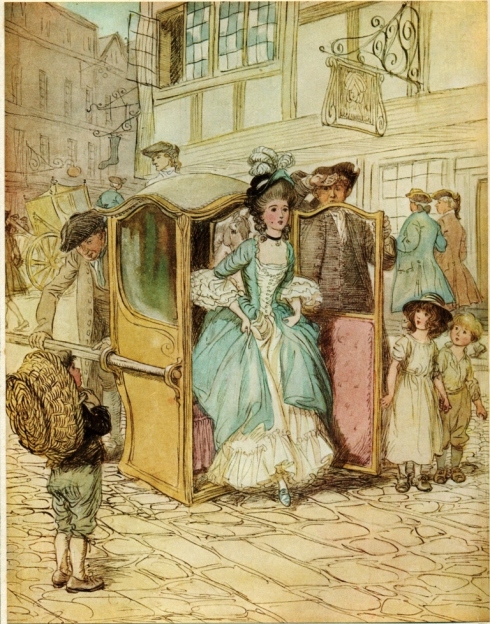 This picture of Lady Teazle disembarking from a sedan chair caused a minor controversy when it was suggested by a reader that the custom on arrival was for the attendants to lift up the hinged lid of the chair to accommodate tall hairstyles, big wigs and hats. Thomson responded that Lady Teazle,” a very impulsive young woman, stooped and issued in one movement as soon as the chair was set down.” And furthermore, he was well aware of the hinged roofs, as shown in this 1892 illustration to Austin Dobson’s The Ballad of Beau Brocade. 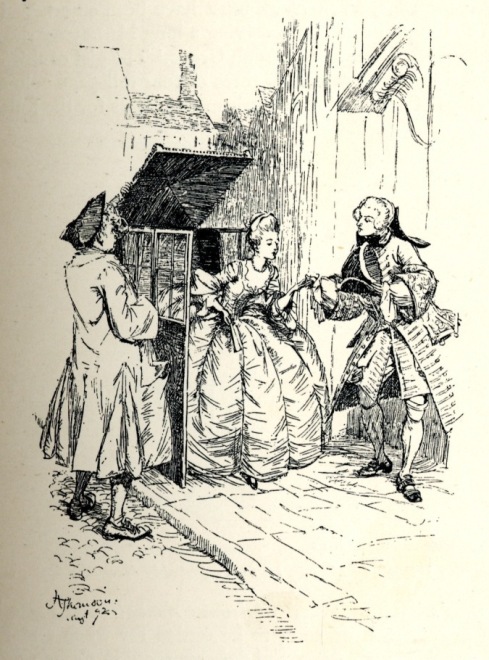 The earlier work looks sketchy by comparison with the subtle depiction of costume and facial expression in the later book.

Thomson had come into his “comic” style. By which I mean his graphic style, light and comedic, reminiscent of a comic strip or a modern graphic novel. The Edwardian version of the 18th century, the antique filtered through the modern. (Just as steampunk style filters Edwardian and Victorian fashion and design through a 21st century sensiblity.)

Or whatever you like. Maybe they’re just entertaining illustrations, and Thomson had found his favourite subject matter. Attractive young women, ridiculous young men with a smattering of eccentric older players, all of them better dressed than they have a right to be, in an accurate but romantic version of period fashion.

The School for Scandal is a play of course, not a novel like Evelina so I couldn’t quite ignore the actual story (there was a nagging feeling that I’d seen it performed once at the National Theatre but that could have been some other play of the period featuring fops and gossips,) although I did let most of it sink into the background. All I really needed to know, courtesy of Thomson, was that it featured sneaking around on dark staircases, 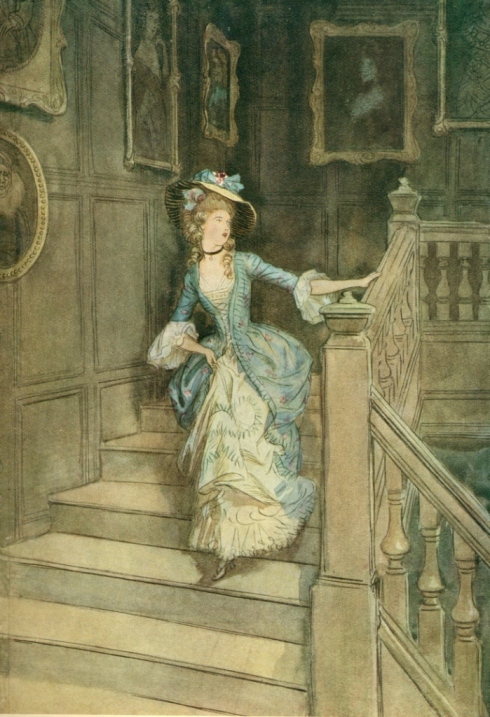 a bit of public hilarity, 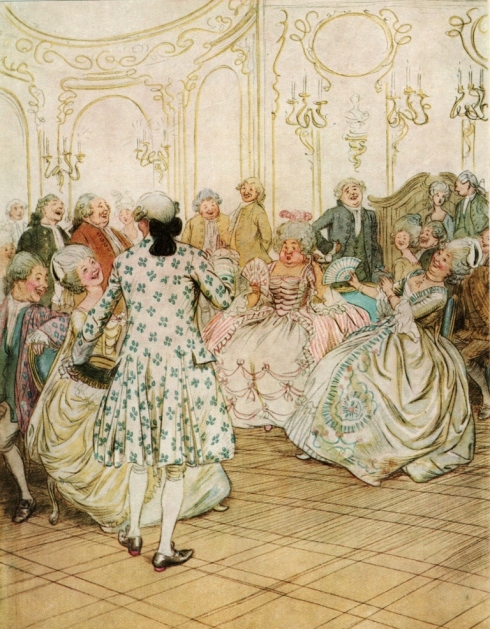 She looks like she’s holding too many cards to manage. You can’t make out the cards in his hand but he’s got a dozen of them. It’s piquet of course, a game I’ve only ever read about.),

some polite  flirtation (with a bit of fan work), 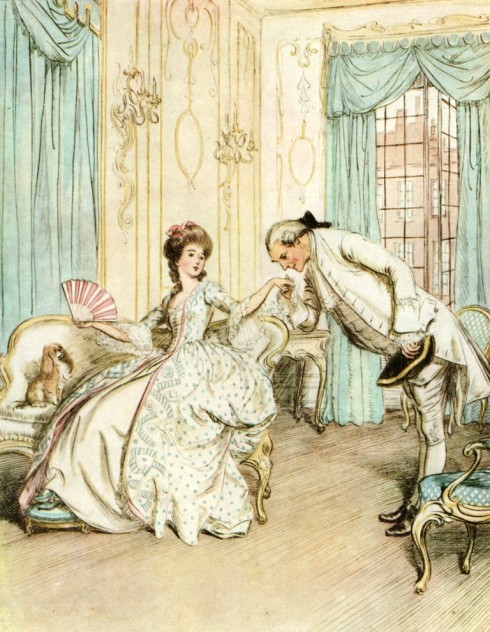 and a little reminiscence about days gone by. 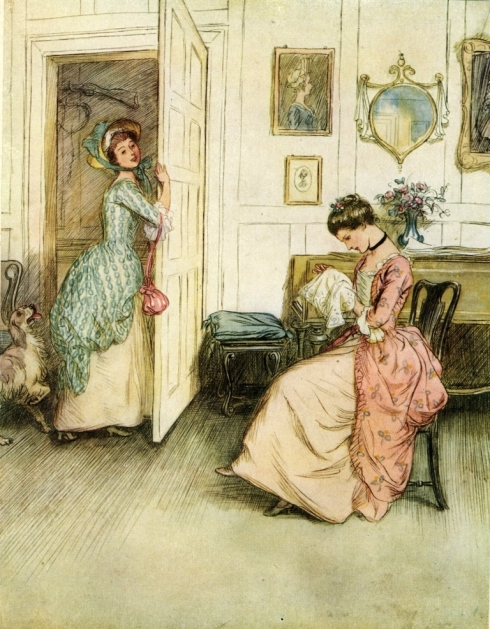 Note the lapdog on the sofa compared with the more robust spaniel in this picture.

Thomson  often illustrates things that aren’t actually in the action, like this:

A great portrait of a bit of early marital discord worked up from a couple of sentences. It’s a flashback in fact, pretty cinematic for 1911.

He can also do the stagey farce stuff. 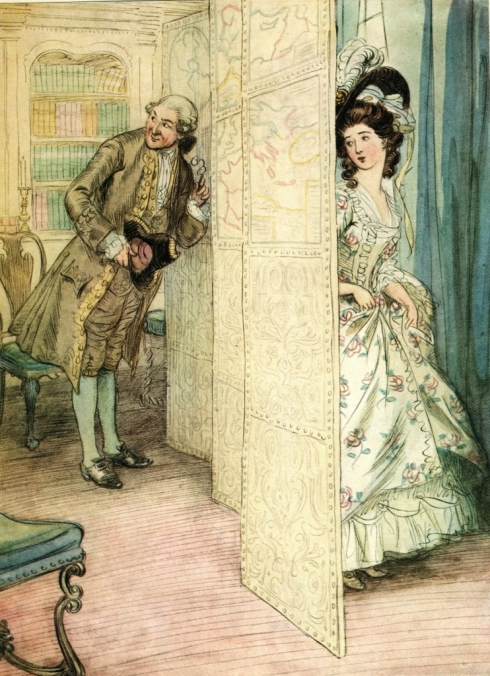 Lady Teazle hiding behind a screen illustrated with maps. 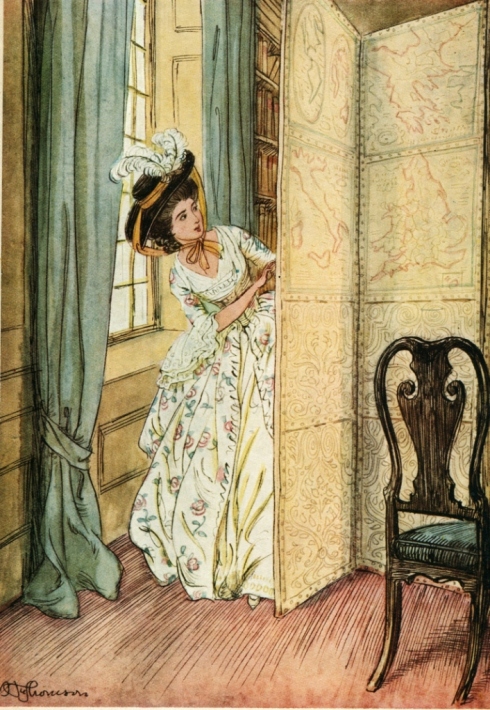 Peeping out, trying to sneak away unobserved. 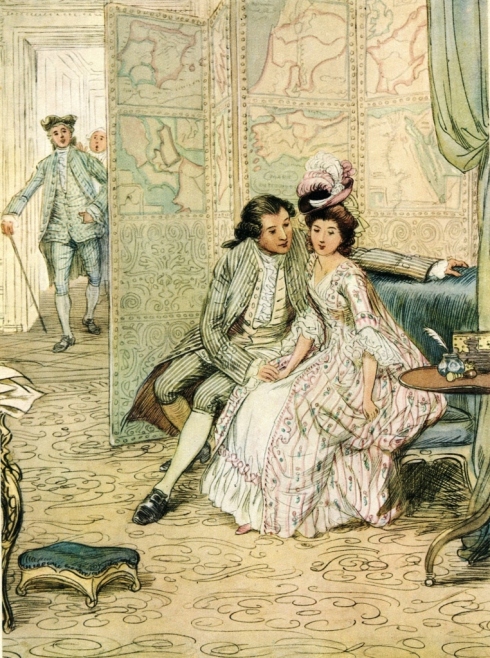 Getting caught in flagrante. Look at that arm behind her.

Unsuccessfully attempting to brazen it out, feeling ashamed.

and finally some kind of resolution, bidding a farewell to the school for scandal. 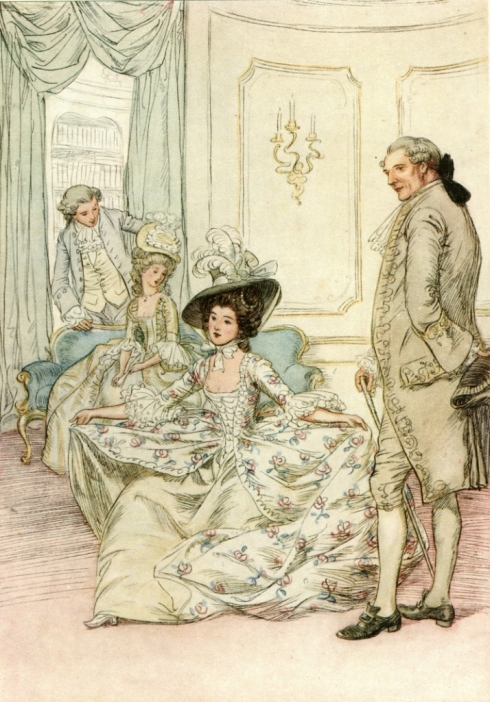 I’ve noticed that the illustrations aren’t as frequent as the book enters the final stretch, something I’ve observed before. Thomson had great respect for the authors of the works he illustrated. (J M Barrie certainly appreciated Thomson’s work –“I delighted particularly in his pictures for Quality Street, and it is the figures he created that I see in that street now, with himself walking among them, uuderstanding them better than the people of today, perhaps understood better by them.” ) But I suspect that the creation of a lively and entertaining set of images was his main purpose. As I’ve said before, for this reader the pictures are what matters most. They tell a perfectly good story by themselves.

I don’t have to thank anyone for providing a copy of the book this time. I bought a relatively cheap copy, a bit tatty, but complete. Thomson’s versions of As you like it and She stoops to conquer aren’t quite so easy to get. But I’m on the lookout. I like my obsessions.

Next week with any luck we should be back in living memory with a set of photos curated by my colleague Isabel.

Does this design remind you of the images on the lower part of the screens?

Oh, and Lady Teazle didn’t get to do the prologue. Here she is now. 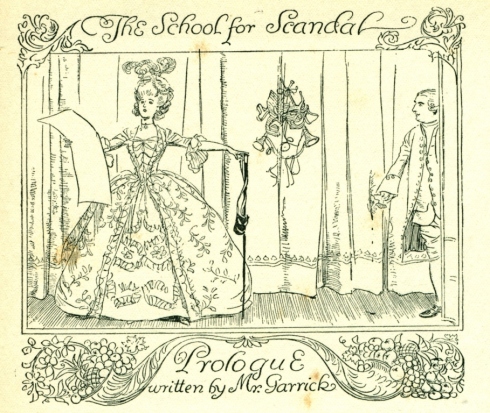 This entry was posted on Thursday, August 11th, 2016 at 9:12 am and tagged with Book illustration, Hugh Thomson, Richard Brinsley Sheridan and posted in 18th Century, 20th Century. You can follow any responses to this entry through the RSS 2.0 feed.
« Elegant shopping at Derry and Toms
Hidden in plain sight: Chelsea’s Jewish cemetery »