Thomson and Shakespeare: into the woods

We had a look recently at a Shakespeare comedy through the eyes of W Heath Robinson and saw a dark and fantastic view of the play. This week we’re back in lighter territory with Hugh Thomson’s illustrations for As you like it. (1909)

The play is another of those stories where the heroine takes on a male identity. There is even more confusion and a greater number of frustrated lovers in the play than in Twelfth Night and at the end Rosalind gathers them all together like a drawing room detective not to name the killer but to marry them: herself and Orlando, her best friend Celia and Orlando’s brother Oliver, a pair called Phebe and Silvius and the clown/fool Touchstone with a girl called Audrey. It all takes place in the Forest of Arden, a sort of rural paradise setting, and although there is some actual danger and threat from time to time the story has plenty of scope for Thomson’s favourite subjects and places: attractive young women, foolish young men in a rural setting.

At the start of the play he depicts a kind of classical / medieval scene with several pictures of Rosalind and Celia. Here they join the crowd watching the wrestling. 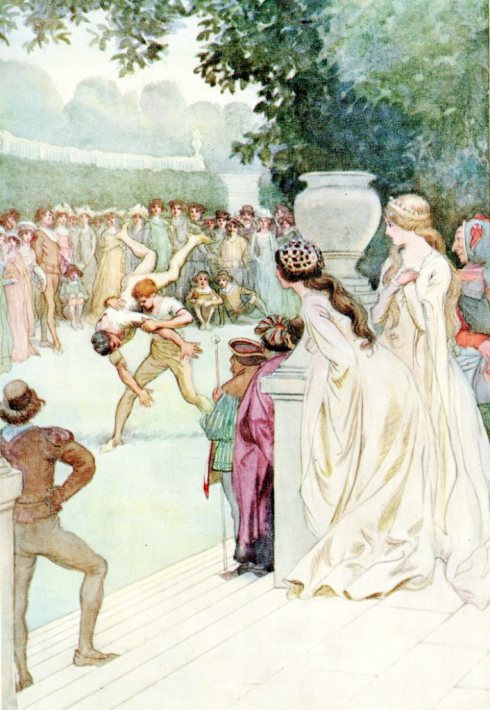 The two friends wear ethereal / angelic robes (Celia is the dark haired one) and they live in some kind of ornamental garden. Italian gardens were already familiar to contemporary British and American readers. The novelist Edith Wharton had written a book about them with photographs and illustrations by the artist Maxfield Parrish (1904). We saw some of those big urns in the post about Twelfth Night. 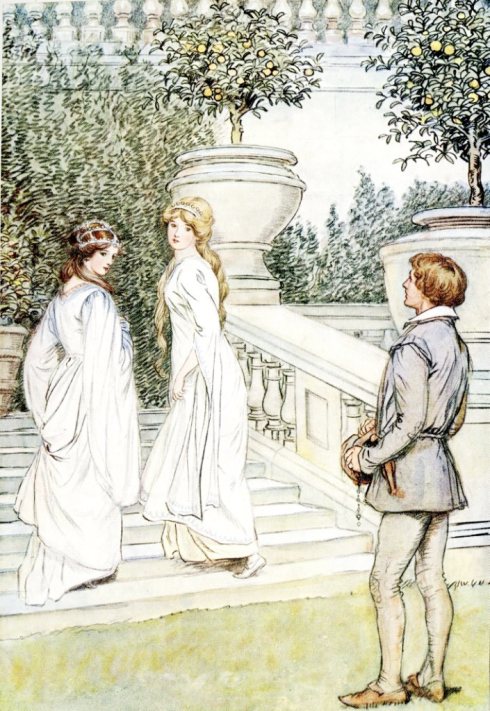 Rosamund and Celia look particularly attractive in this picture as they bid farewell to Orlando. Rosalind is about to be banished and Celia to accompany her into the Forest of Arden. They opt to change their clothes and adopt new identities as they go on the lam, into the woods.

Here they are in their disguises with Touchstone, the clown/fool of the play, looking already tired out by the exertions of their flight. “O Jupiter, how weary are my spirits.”(Rosalind) 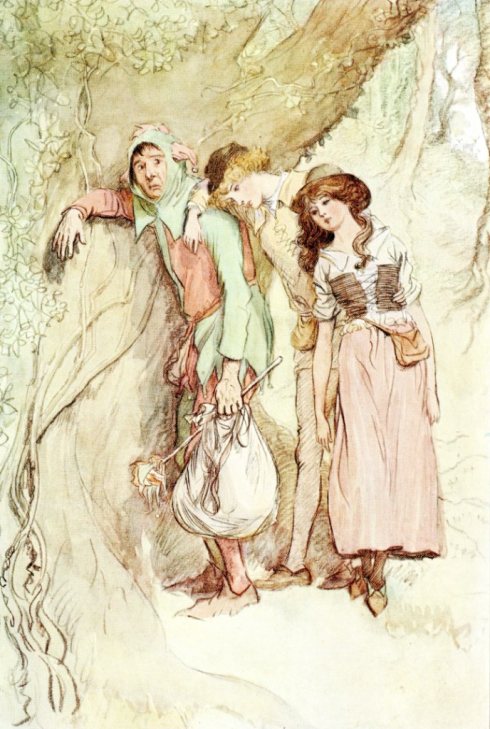 And disheveled, in a bohemian sort of way. Celia looks like she could stroll down any 21st century street without causing any time paradoxes. (Actually, according to this article in the Guardian she’s right on trend.)

Thomson was pretty good at depicting characters who are tired, exhausted or just lazing around. (Don’t take my word for it. Look back at some of the other Thomson posts. He loves to draw people resting. As below) 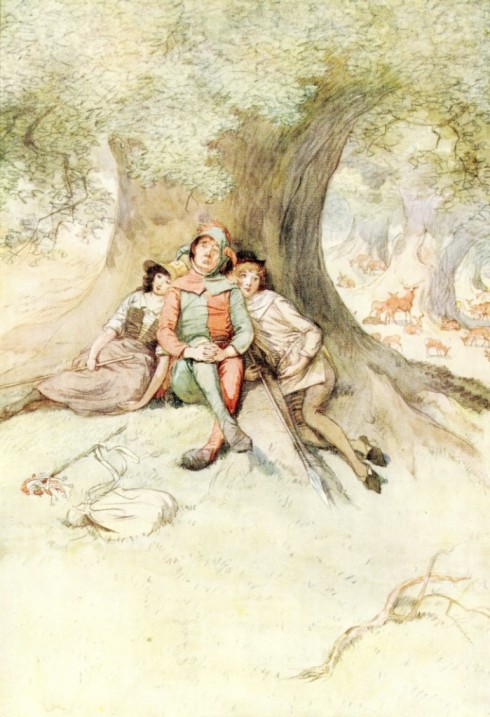 The shagged out trio are observed by the local animal life.

Below, being tired has shaded into some serious sleeping overlooked by some supernatural characters. Thomson illustrates the line spoken by Rosalind: “Beauty provoketh thieves sooner than gold.” as she decides to become a man for the purposes of their journey. 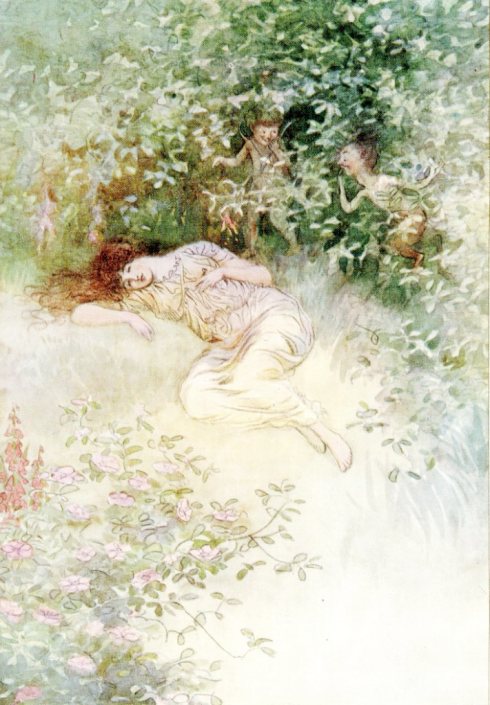 Thomson used nymphs, cherubs, satyrs and others in his pictures, especially in the decorative black and white drawings. I’ve put a group of those together.

In this picture we’re back in that ornamental garden, to illustrate a line from a speech by Jacques. (“If ladies be but young and fair they have the gift to know it.” ) Compare this with Robinson’s pond/fountain in Twelfth Night. 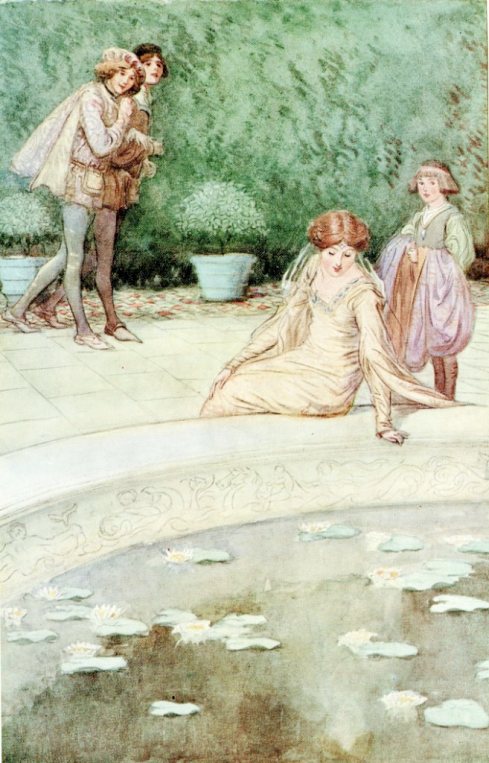 Still in the woods there is time for some clandestine sneaking around as Rosalind and Celia spot Orlando. 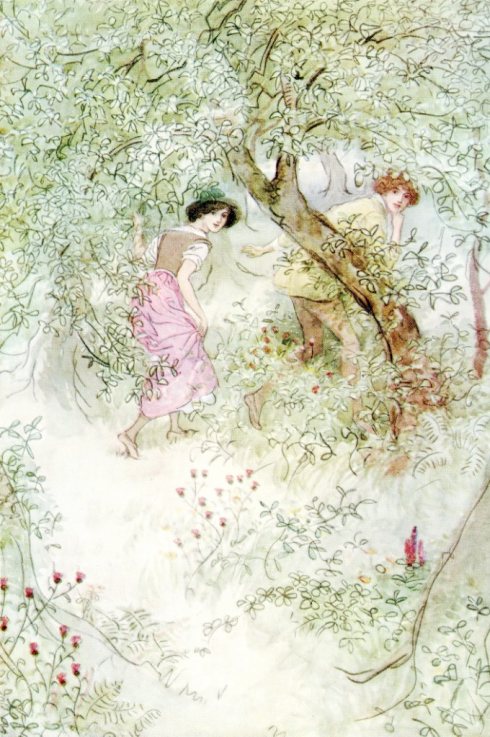 And then emerge to have a bit of fun with him. Rosalind:”I will speak to him like a saucy lackey and under that habit play the knave with him.” 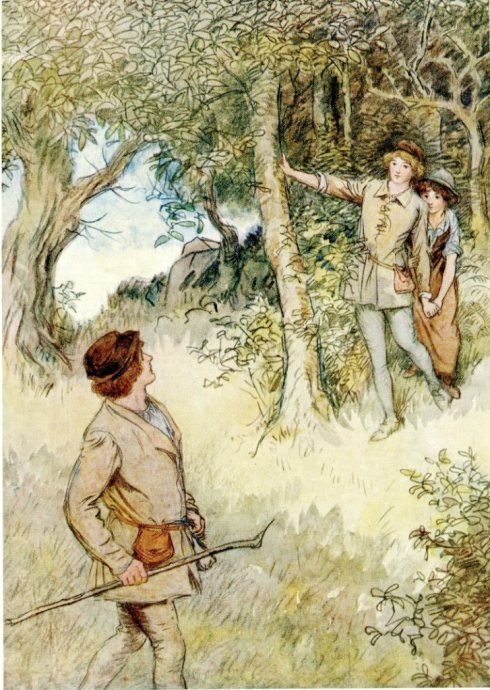 Now here are some of the other members of the cast: barefoot Audrey, another wild child, having some goat problems in a picture reminiscent of some of Thomson’s illustrations for the Admirable Crichton (a 20th century look at social identities, among other things). 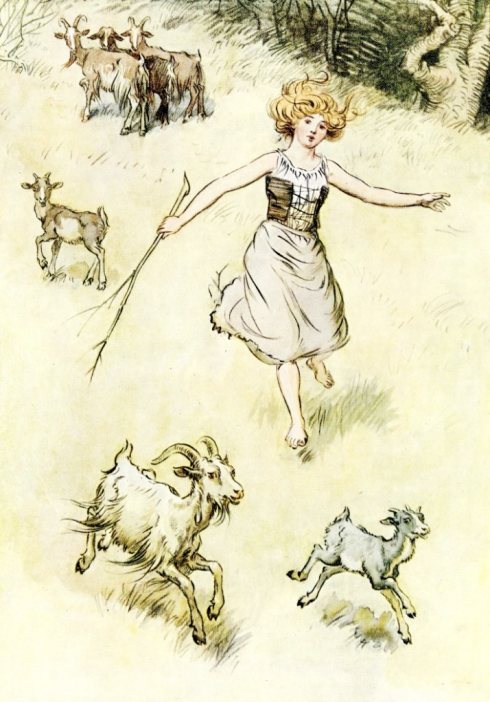 And the lovely Phebe, tending to a sizeable flock of sheep. As I may have said before, Thomson was essentially a rural artist, and he loved the chance to depict country life. 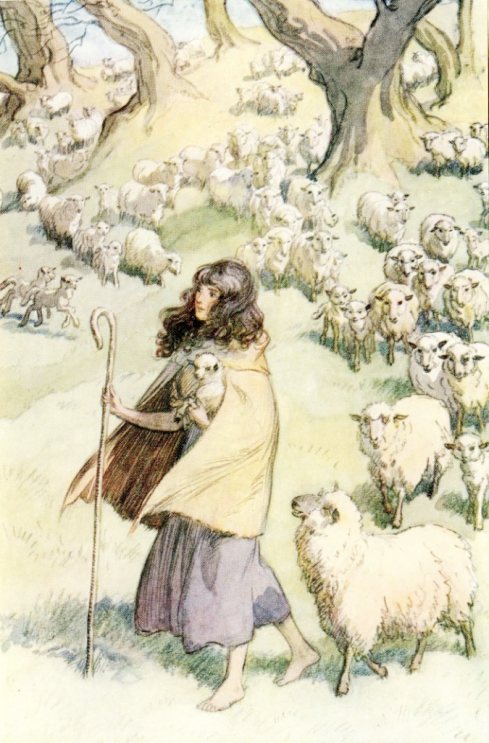 I particularly like the sheep keeping an eye on one of its lambs.

As often happens Phebe falls in love with Rosalind-as-a-boy, scorning Silvius, who is love with her. The sheep find all this quite confusing. 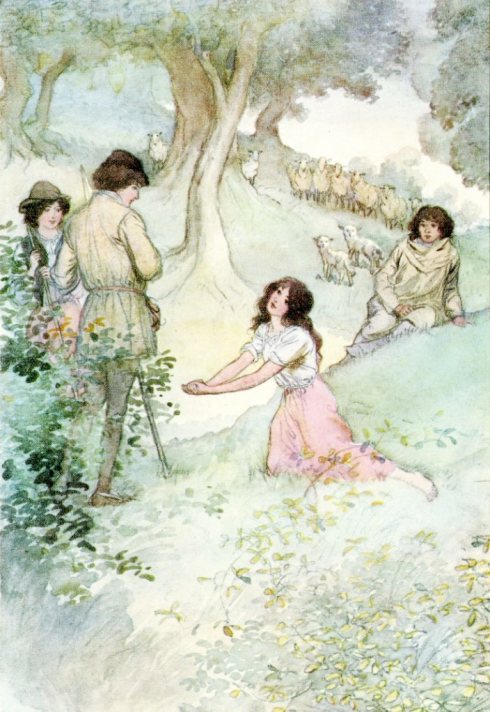 Below we’re back to the diaphanous gowns with a confused bit of symbolism. 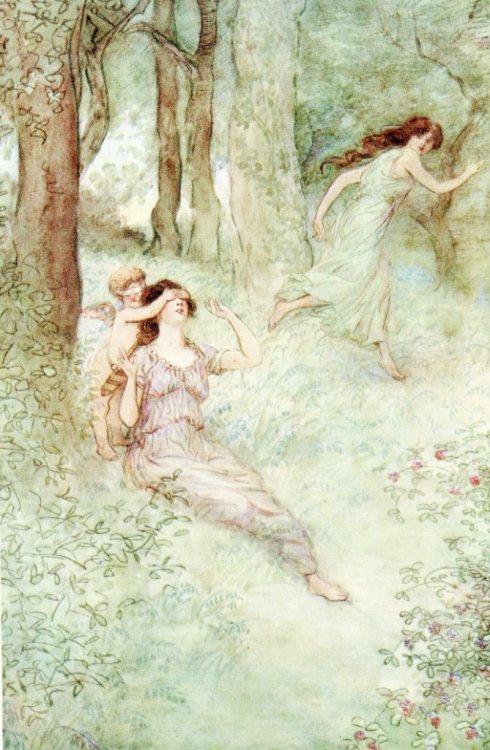 Rosalind says speaking of the depth of her love for Orlando “..that same wicked bastard of Venus that was begot of thought, conceived of spleen and born of madness, that blind rascally boy that abuses everyone’s eyes because his own are out, let him be judge how deep I am in love.”

As usual, Thomson has wandered off from the main thrust of the plot in the last section of the play. (He’s not the only artist who does this. Is it a kind of “no spoilers” policy, or has he lost interest?). Touchstone calls upon two pages belonging to the exiled Duke. “Come sit, sit, and a song”. His own intended, Audrey sits with them. 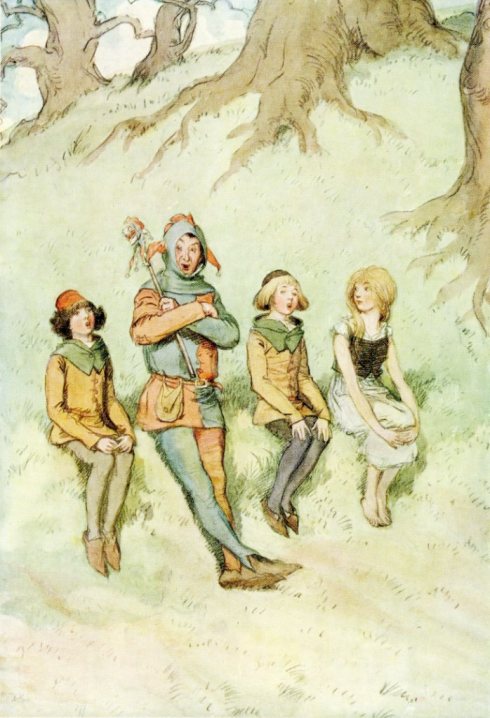 The song they sing is a well known one: “It was a lover and his lass…” 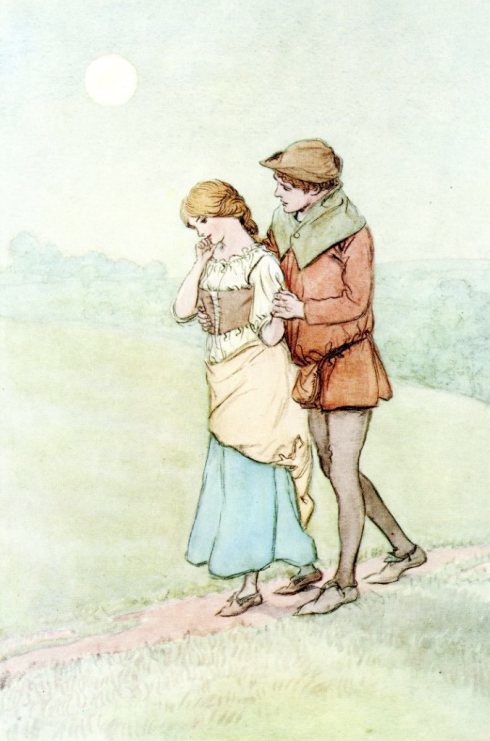 Like Robinson, Thomson ends with a clown’s song. He declines the opportunity to show us the goddess Hymen who officiates at the multi-character wedding.

It’s a good picture but I wasn’t satisfied with it as a finale. So I saved this final colour plate for you from the first act. Imagine Rosalind and Celia, still best friends, back in the decorative grounds of that villa wearing their white robes and still looking pretty decorative themselves. 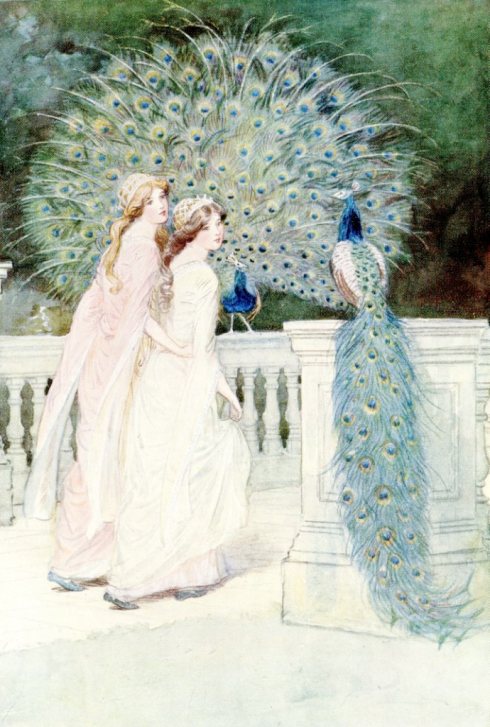 So that’s our end. And here is the title page, where mischievous minor supernatural entities, one rural and one a bit more urban, meet for a closing tune. 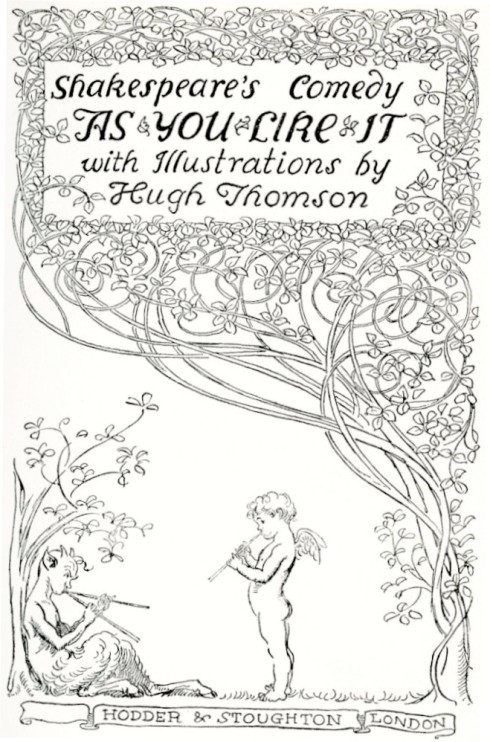 I think that “As you like it” is one of Thomson’s most successful projects. There are 40 colour prints in all in the book so it’s well worth having a look at.

The second part of the title of this post is of course a reference to the Buffy episode where she breaks up with Riley, rather than the Sondheim musical.

Thomson’s work on the Merry Wives of Windsor is also pretty good. You can see a few of the pictures here.

We never got around to mentioning “All the world’s a stage” etc. But then Thomson didn’t choose to illustrate it either.

I’m resolved to leave Thomson alone for a couple of months. We may return to Shakespeare. But I have set aside some pictures from another Thomson book for a near Christmas post

This entry was posted on Thursday, October 13th, 2016 at 7:04 am and tagged with Book illustration, Hugh Thomson, William Shakespeare and posted in 20th Century. You can follow any responses to this entry through the RSS 2.0 feed.
« Before the Westway: a North Paddington skyline
Bignell at work »