Christmas Days: a bunch of busts

I scanned today’s pictures in response to an enquiry about busts inside the former Holland House. We have an album from the 1880s with some views of the interior taken before a bout of redecoration. On another occasion I might have scanned the whole album which could have resulted in a full length post but I didn’t have much time so I only did a few. I was particularly intrigued by the conservatory.

This was Holland House at the time.

The east front with, a couple of guys standing patiently in front of it to add some local colour. At least one of them might have come from breakfast.

Here, in the sumptuous breakfast room. I spotted a bust up there in the corner but then turned a page and found a whole set of busts. (Is there a collective noun for busts?)

This is the conservatory, looking back into the house. A pleasing number of busts are on view, and some convenient chairs in which to sit and contemplate the outside while inside. You can see another Kensington conservatory near the end of this post.

This is the view looking in the other direction into the garden, You can just make out a full length statue in the daylight. Wouldn’t you want to sweep through the conservatory after that nice breakfast and tale a turn in the grounds? You can’t walk through this space anymore but the grounds are still available for all, winter and summer.

Today’s monkeys, Boris and Dino (who live in the Park) have taken the opportunity to do just that, while wishing you a happy Christmas. Here they are in the office:

And out in the park. 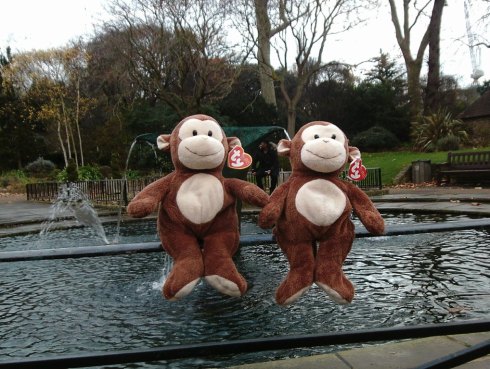 I was checking the link above to an earlier post and was reminded of my Christmas 2013 post about Irving and Caldecott’s Old Christmas. That was one of my first posts about book illustration, and Caldecott was a contemporary of our friend Hugh Thomson. Check out a traditional Christmas here.

This entry was posted on Tuesday, December 20th, 2016 at 9:41 pm and tagged with Holland House, Holland Park and posted in 19th Century, 21st Century, Interiors, Kensington. You can follow any responses to this entry through the RSS 2.0 feed.
« Christmas Days: the old old town hall
Christmas Days : Bignell – a childhood in the 50s »