We’re back to the same place we started last week, near the junction of West Cromwell Road and Warwick Road in the company of Bernard  Selwyn, urban explorer. 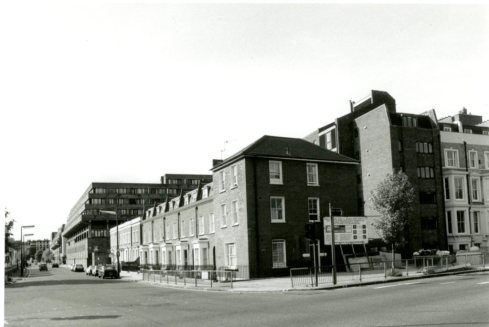 This picture shows the east side of Warwick Road, looking north. You can see a large building known now simply as the Council Offices, Pembroke Road. There are residential floors on top of it with walkways leading to entrances in an adjacent building, an unusual arrangement I haven’t seen anywhere else. When I first worked for the Council it was simply called the Depot.

You can’t see the west side of the road but many of you will know that what is there now is a Tesco superstore, surmounted by a car park. From the car park there is still a good view of the railway track we looked at last week.

On the other side is a large building which was formerly a repository for Whiteley’s, the Bayswater department store. It now forms part of a development called Kensington Village.On the eastern side of the picture was a wide, relatively open space.

Now you will recall I mentioned the Kensington Canal last week. Originated by Lord Kensington and Sir John Scott Lillie (of Road fame) and opened in 1828 this was a comparatively short lived venture intended to link Kensington with the Thames, following the course of an existing waterway called Counter’s Creek which rises near Kensal Green Cemetery and flows south, under several names (including Billingswell Ditch as which it featured in a post about Brompton ), ending up at the river under the name Chelsea Creek. On Starling’s 1822 map of Kensington Parish the stream is called a “common sewer”.

The canal would follow the course of the creek north to a basin just short of the “Great Western Road” (the road from Hyde Park Corner to Hammersmith which Kensington High Street is part of), the ultimate plan being to join up with the Grand Junction Canal at Paddington. This was happening in the 1830s when railways were also on the rise, somewhat complicating matters.  The story is told in an excellent book called London’s Waterways by Martyn Denney (1977) but to cut this account short the canal suffered throughout its existence from silting up and the most profitable section was the part running up from the river to the King’s Road. There don’t seem to have been many views of the canal. The artist William Cowen painted a water colour, showing the walled garden that was Brompton Cemetery in the background.

The banks look like they’re already suffering. The canal was tidal so was only navigable for part of the time. It ended up in the hands of the West London Extension Railway Company who began filling in the upper section of the canal in the 1860s. This detail from a plan of 1854 shows the basin at the end of the canal.

And this  detail from an 1848 map shows the basin, with its various wharves, in relation to nearby streets.

The railway, which still goes under the King’s Road ran alongside the remainder of the canal and crosses the river near Chelsea Harbour. You can see the remains of the canal in 1972 in this post about Lots Road, and this one.

Mr Denney tells us that at the time he was writing, the “site of the canal basin” was behind “a pair of high wooden gates that open onto a patch of waste ground..opposite Pembroke Gardens“. He speculates that some of the old buildings in the railway goods depot could date back to the old wharves. What was definite though was the continuing existence of the old lock house and board room. Back in 1983 this was Selwyn’s quarry. 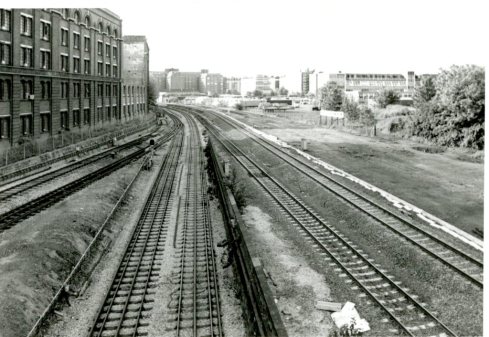 A lock keeper’s cottage and what was called the board room where meetings were held and the records of the company kept. If you can stand one more map, this is from about 1968. 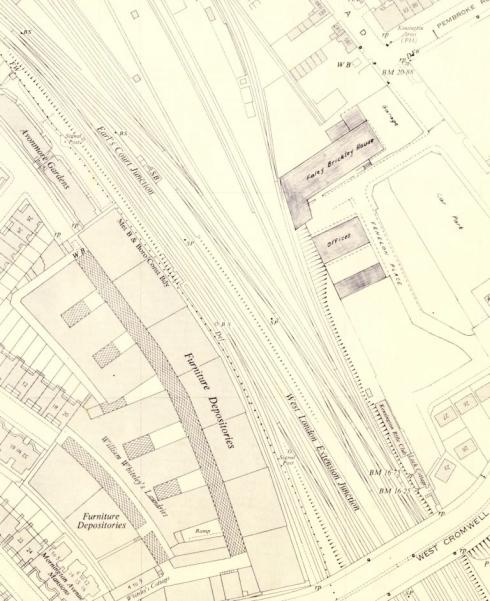 You can see that at one point the board room had been taken over by the Kensington Rifle Club who used it for shooting practice I suppose. 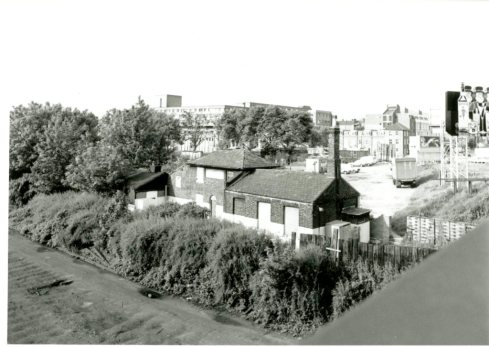 You can see that by 1983 it was located in the centre of some waste land which was being used as a car park. 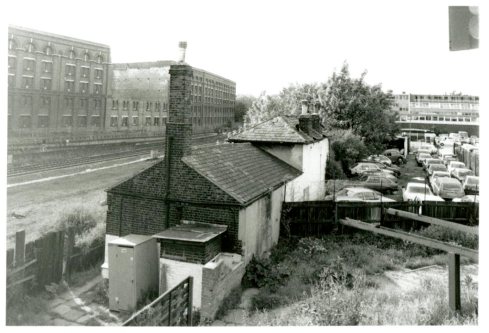 The building itself is looking dilapidated and the area around it overgrown.

Fair game for the questing camera of Bernard Selwyn. Canals and the remnants of them were just one of his interests. 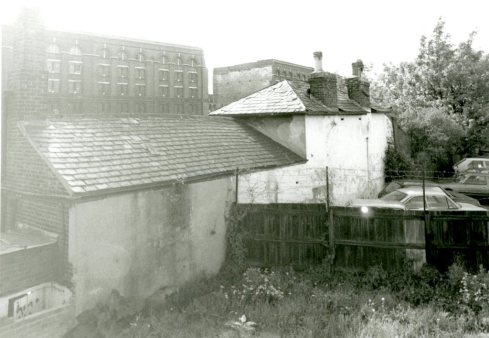 But we have to thank him for his diligence. Below the level of a major road he had found his way to a small piece of transport history.

He slipped back there in 1990 to take a colour picture.

The building looks worse than before.

The Tesco Superstore was built in 1998, and the lock house became a forgotten building. But Selwyn and others transport aficionados preserved its memory.

Friend of the blog Roger Morgan gave the game away last week. But perhaps he just whetted your appetite. The old lock house was familiar to many people while it still stood. I’m sorry I never took a detour to look at it when I was visiting the Depot (for training courses, particularly the ones where the trainer started a fire in the garage and you had to put it out with the correct colour coded extinguisher) in pre-Tesco times. For those who do remember I hope Selwyn’s pictures bring it all back.

This entry was posted on Thursday, April 20th, 2017 at 7:28 am and tagged with Kensington Canal, West Cromwell Road and posted in 19th Century, 20th Century, Kensington. You can follow any responses to this entry through the RSS 2.0 feed.
« On the border 4: roads, railways and the ghost of a canal, 1983
Bignell’s travels: back streets and backwaters »