One of the people who read the recent post on Ashburn Mews asked if I could continue my walk into Courtfield Road, which has also had significant development since the 1970s. So I looked, and there were indeed pictures of the original buildings next to Bailey’s Hotel and Gloucester Road Station. I’m a little obsessed with that small corner of London myself, as I described in a post about South Kensington, as it lies way down in the lowest levels of  my personal archaeology of London. (Along with Crystal Palace and Clapham South, for family history rather than geographical reasons.) So my apologies to less obsessed readers if we take another turn around the “backside of Cromwell Road” as another reader put it. Here’s our patch again. 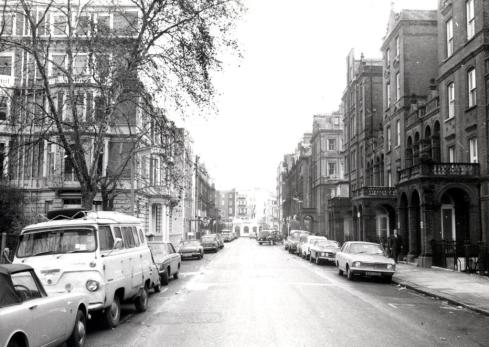 We’re looking east along Courtfield Road. The gardens of Ashburn Gardens are just on our left and way in the distance is that curious single storey white building, the Midland (now HSBC) Bank, a good point to focus on as we head towards Gloucester Road again.

The buildings on the right are still there. This is a closer look. 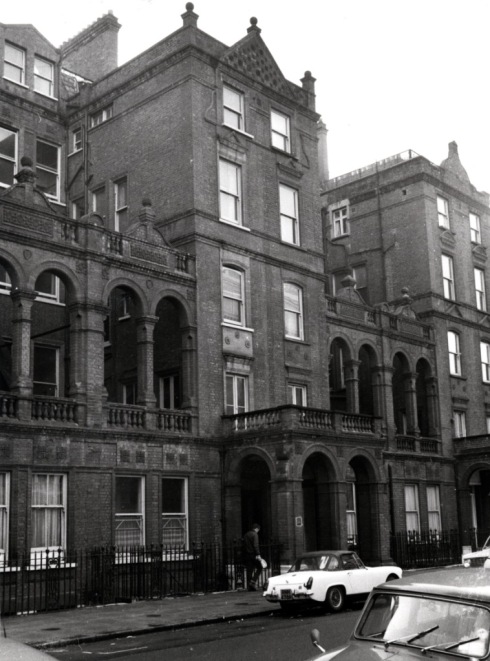 I’ve always liked those arch features, although I don’t know if they serve any purpose apart from decoration. 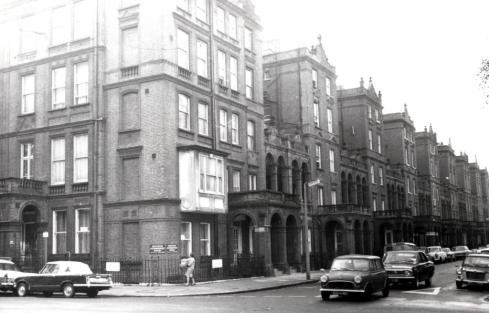 I had to check to see if that pale protuberance at first floor level was still there, and it is (somewhat cleaner today or is that the effect of colour photography?)

This section, (1-13 Courtfield Road), leading up to Bailey’s Hotel has been replaced by a modern purpose built hotel, functional rather than aesthetically pleasing, but not ugly either.

This close up shows the join between the buildings as it was in 1969. The arch is still there but now it is the entrabce to the Bombay Brasserie. (There was a catering company and restaurant in there in 1969.)

I rather like the maxi coat worn by the woman crossing the road. As well as being fashionable, it was December when these pictures were taken.

The picture below shows the full facade of Bailey’s Hotel.

If we move back a little and swing round to look northward, we can see the other side of the street.

We’re looking from Ashburn Place at 2-12 Courtfield. There’s another tower or turret at the end of the row, and below, a closer look at that. 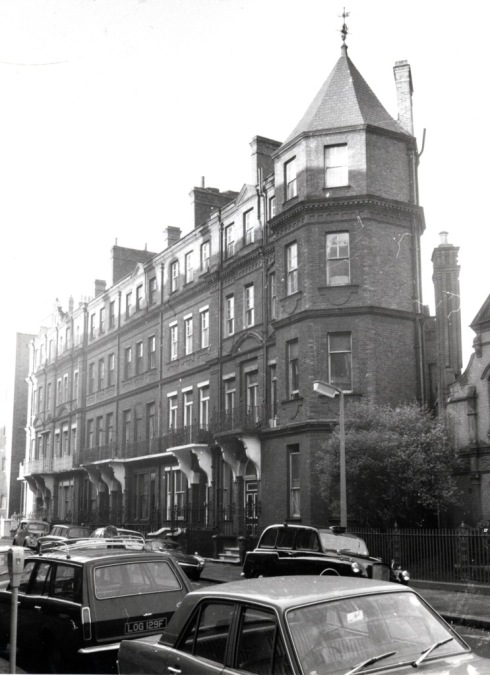 See the tall chimney stacks behind the blocks, and below, by the entrance to Ashburn Mews, another curious detached building with a tower, which looks at first as though some very dry business was conducted inside. 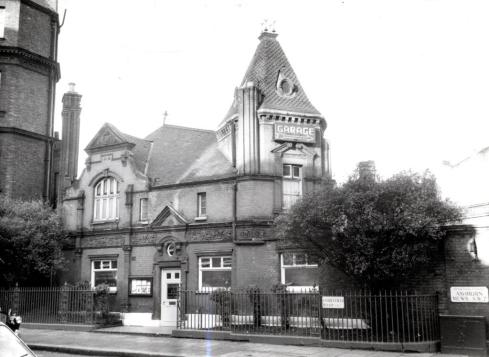 The building was called Gloucester Lodge and was the location of one of the offices of the estate agents Roy Brooks. The company was once famous for its forthright descriptions of properties in Sunday newspapers, some of which were collected in two slim volumes, “A brothel in Pimlico” and “Mud, straw and insults”. If this passed you by let me quote from the cover of the first volume: “Wanted: someone with taste, means and a stomach strong enough to buy this erstwhile  house of ill-repute in Pimlico. It is untouched by the 20th century as far as convenience is concerned. Although it reeks of damp and worse, the plaster is coming off the walls and daylight peeps through a hole in the roof, it is still habitable judging by the bed of rags, fag ends and empty bottles in one corner….10 rather unpleasant rooms with slimy back yard. £4650 freehold – tarted up these houses make £15000. ” Those were the days when £15000 was a lot of money.

It has the look of a resolutely traditional business which disguised the iconoclastic methods of its proprietor.

On the ornamented tower, a large sign pointing you into the Mews, where there were indeed more than one garage. A few cars are huddled against the buildings as they frequently did in mews streets, perhaps as unnerved as pedestrians by the lack of pavements.

And the edge of the Piccadilly Line side of Gloucester Road Station.

It looks as though the second station was still in use for Underground purposes although the florists shop is already there.

We’ve looked at the station before of course in a number of posts, but I can’t help circling round it once more, in an era when it was not surrounded by much taller buildings.

These wintry scenes show the slightly seedy charm of this still windswept corner of London.

Finally, the mirror image of the first picture, looking west up Courtfield Road at a small area of now forgotten buildings with its mixture of ordinary Victorian facades and quirky towers. This was once the modern face of urban life, and although altered by development it retains the atmosphere of an arrival point for west London. 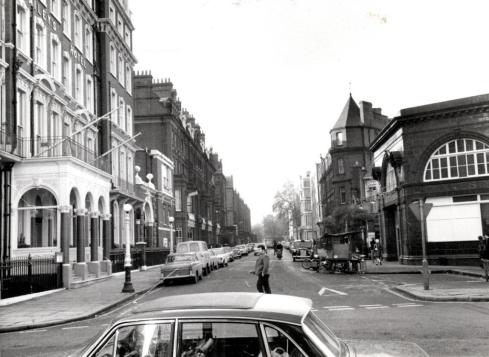 I don’t mind being back here at the station. The question I always ask myself, given the dates of the pictures, is did I just miss seeing the towers and the rest myself, or have I actually walked past them at some point without paying much attention? If the images are all there somewhere in my mind will they surface sometime from the lost past, or were they never there in the first place?

Almost certainly, we’ve now finished with this small corner of Kensington. I think. Next week something completely different as we used to say in the 60s.

This entry was posted on Thursday, February 22nd, 2018 at 10:32 am and tagged with Ashburn Mews, Courtfield Road, Gloucester Lodge, Gloucester Road and posted in 20th Century. You can follow any responses to this entry through the RSS 2.0 feed.
« Archer’s High Street
Blythe House: 1977 »