This is another post devoted to the work of JW (Bill) Figg, skating through some of his regular themes and obsessions. Figg liked particular streets (the King’s Road as you’ve already seen, but other less obvious ones like Dovehouse and Sydney Streets), particular buildings and particular details in streets and alleys. We’ll look at some examples of all these in today’s post, starting with a bit of a scoop, at least as far as I was concerned.

The Chelsea Workhouse in Dovehouse Street was an institution I’d read about and seen as a detail in pictures of a larger area but the first time I saw a picture of the entrance was among Figg’s pictures. 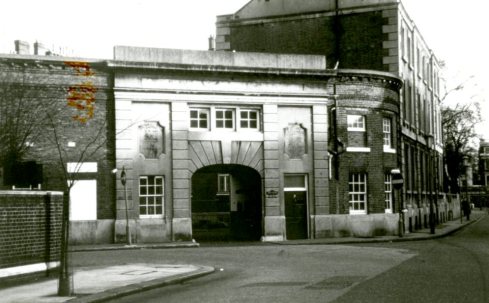 This is the main entrance in Britten Street. Dovehouse Street is on the right of the picture. Some familiar words occur to me when I see this image: “abandon hope all ye who enter here.”

This is the side of the building, with the old Chelsea Hospital for Women visible in the distance, now part of the Royal Brompton Hospital complex of buildings. 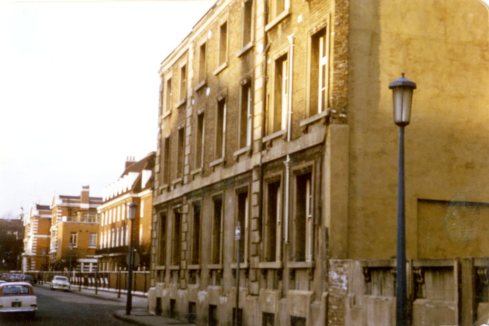 The original workshop was laid out in the 1730s and expanded several times in the 19th century. In the 1920s it became the Chelsea Institution, a presumably less punitive place to stay. The building was demolished in the 1970s and replaced by an old people’s home called Kingsmead which has itself been demolished in the last year.

Moving along Britten Street to Sydney Street you come to a small row of houses which have survived all the building upheavals around them. 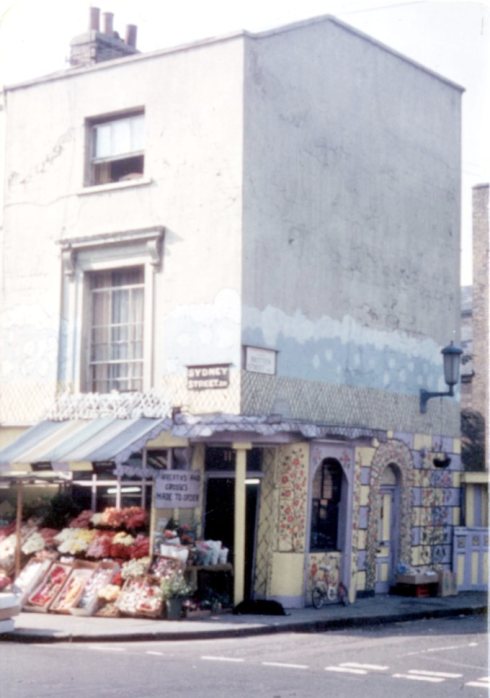 Figg took more than one picture of this block. In this colour image (1980s?) you can see the highly decorated Britten Street part of the corner building.

The next picture is also in the vicinity. 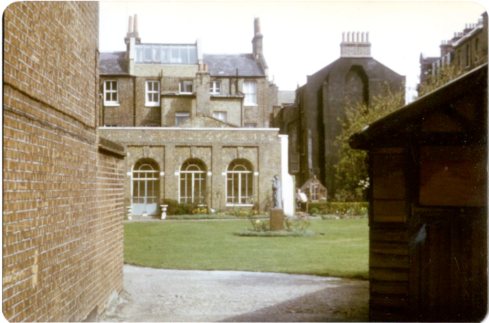 A view into the garden of the St Wilfred’s Convent building. This became part of the hospital complex in 1968.

Figg was a lover of the small details that can be found on the walls of buildings, like this sign on the old fire station. 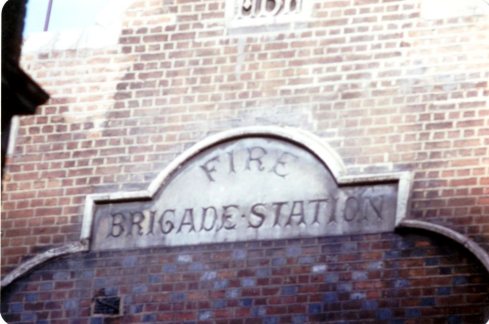 Or openings and holes in, around and under buildings, like this one in Manresa Road. 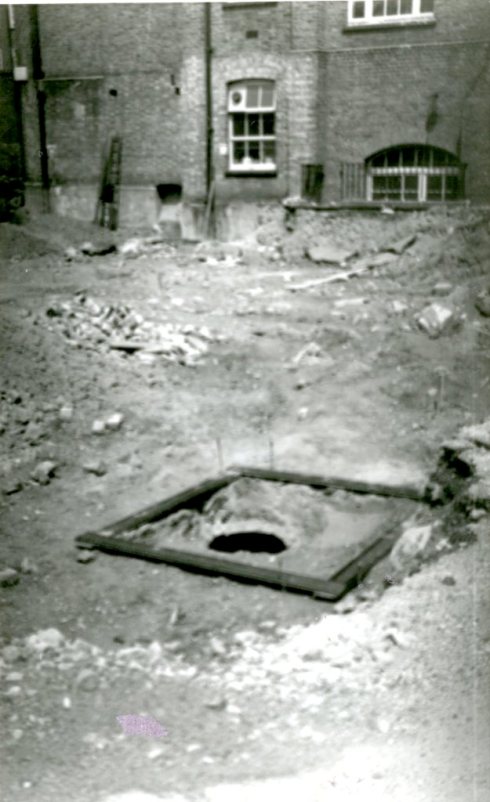 He describes the hole as “tunnel exit college site”. I wouldn’t be surprised if he had been into the tunnel

We’re moving in a southwards direction into Old Church Street. As you can see from the cow’s head at the top of the façade this was the site of an urban dairy (see this post). 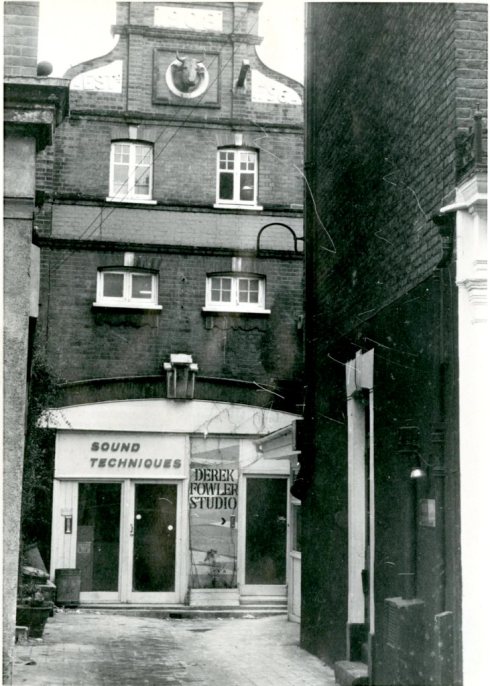 You can also see that it was the home of a recording studio, Sound Techniques. Behind this unassuming frontage albums were recorded by John Cale, Nick Drake, Fairport Convention, Incredible String Band, Jethro Tull, John Martyn, Pentangle, Pink Floyd, Richard Thompson, Sandy Denny, Steeleye Span and many famous names from the late 1960s / early 1970s. You can find out more here.

Those names set me thinking of the Chelsea Pageant pictures including one in this post . But that’s probably just a personal flight of fancy.

Not too far away was an example of what are now called ghost signs, remnants of old businesses who have left faded signs on walls. 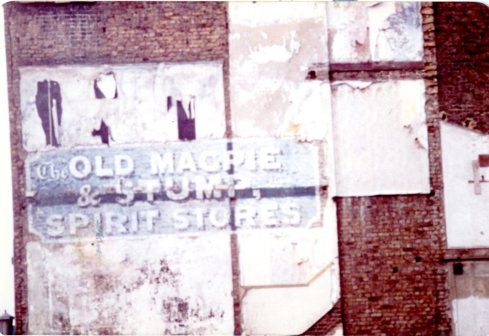 This picture was taken by Figg when the site on the corner of Oakley Street and Cheyne Walk was being cleared for the construction of Pier House, a large residential block down by the river. (Figg was also obsessed with the statue outside it, Boy with Dolphin, but we’ll leave that for another day.)

From one wall you can’t see any more to another. 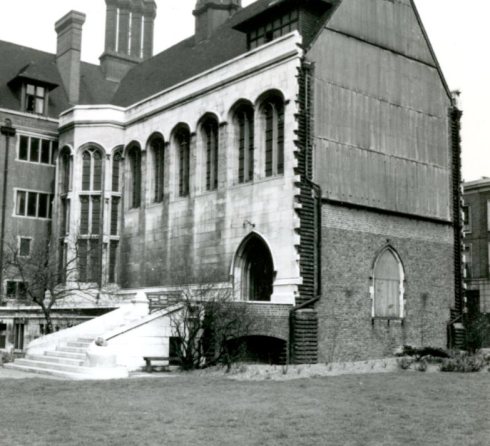 This is Crosby Hall, the City of London building transplanted to Chelsea in the 1920s,  before it was bought in the 1980s and converted into a private residence with a couple of wings of pastiche Tudor palace added cutting off this view.

Literally, round the corner in Beaufort Street was the Convent of Adoration Repatrice, damaged by bombs in 1940. The building was replaced by a chapel in 1985. 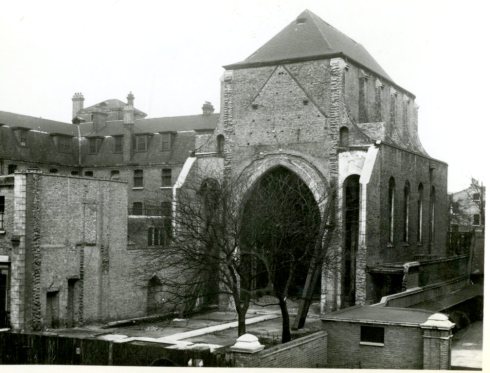 It now forms part of a Catholic educational establishment, Allen Hall, which is the building on the left.

We’re crossing the King’s Road again now, into another much changed street, Park Walk. Many of Figg’s pictures are unlabelled so I have a few named Unknown Street, which I may put before you in a set one of these days. 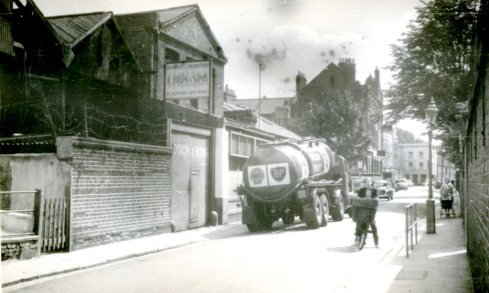 I’ve identified this one (1950s I think) as Park Walk because of the wall and pavement on the right, recognizable as Park Walk School, and the Globe pub visible in the distance. (see one of my first Figg posts). The left side of the street up to the back of the former Man in the Moon pub also visible has been completely redeveloped.

By contrast the view in the picture below, looking north up Limerston Street is virtually intact. But the Sporting Page pub was called the Odell Arms, a fact which pleases me because of its coincidental connection with a cuddly octopus. (If you like that sort of thing) 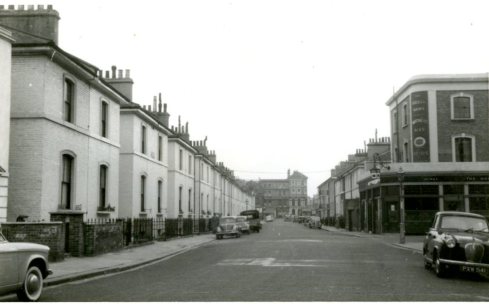 We’ve been a little short of people this week so here is literally a bunch of them in nearby Hobury Street. 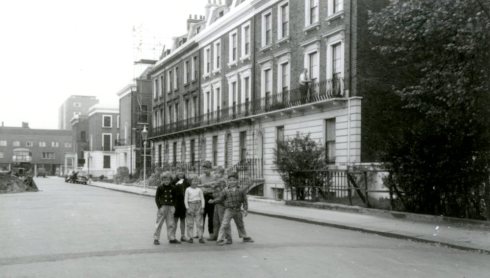 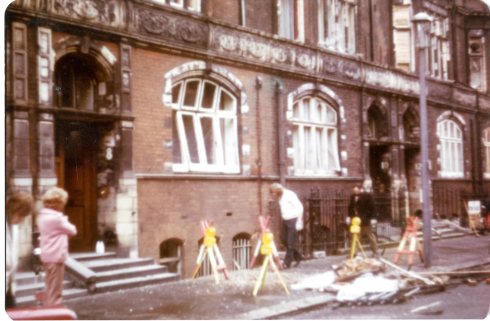 This shows Cadogan Gardens after an IRA bomb. I’m not sure of the date to be honest. My wife remembers seeing bomb damage in Chelsea on her way to school on one occasion at least but neither of us could pin this down to a particular year. Perhaps someone could help with that?

I’m a bit late posting this week. Too much of my proper work to do, and a bit of an upheaval in the archive rooms. But Figg is worth waiting for, I think. I’ll  do a few more of these random selections in the coming months, and definitely think about showing you some as yet unidentified locations.

This entry was posted on Thursday, March 8th, 2018 at 5:26 pm and tagged with Chelsea Old Church, Chelsea Workhouse, Crosby Hall, Figg, Hobury Street, Limerston Street, Park Walk, Sydney Street and posted in 20th Century, Chelsea. You can follow any responses to this entry through the RSS 2.0 feed.
« Blythe House: 1977
A King’s Road Classic »