The content of this post arises from the use of an occasional method of mine to stimulate inspiration. Start scanning with one picture you like and keep going until a theme emerges. I don’t know if it always work.

For some reason probably to do with my teenage ideas about what London was like and my deep-seated desire to live there I was very taken with this picture. 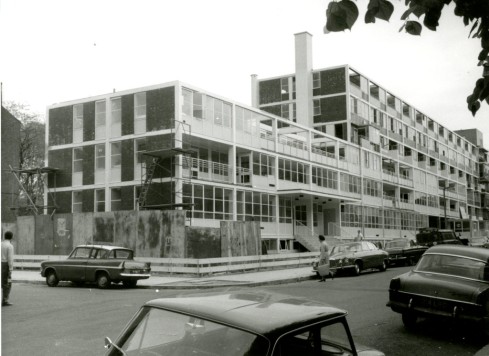 Possibly it was because this block of “new flats”, as John Rogers calls them,  in Oxford Gardens struck me as a distinctly 1960s design, light, airy, optimistic and modern in a street dominated by 19th century suburban villas. I have a weakness for these anonymous boxes which can be found all over Europe. It looks a bit like a student hall of residence.

The old style houses have their own charms of course. 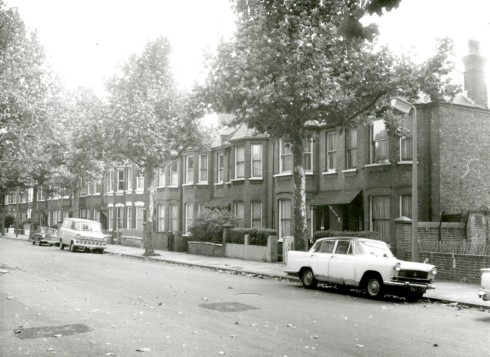 The mid-Victorian terrace is another trope of London living in the late 60s and early 70s. Characters in sit-coms and modern dramas lived in them. Pleasant tree lined avenues, a bit windswept, plenty of fallen leaves and a scattering of rough looking British cars.

I know I’ve already implied in the title that there’s going to be some car identification in this post (that was the “theme” which emerged) , but the truth is I’m not that strong on British cars of this era, so I’m going to have to rely on the car aficionados among my readers to do most of the actual spotting. I just know when I see something interesting.

Now that chunky two-tone monster has got to be something good. It looks like it could swallow the Hillman Imp (?) behind it, maintaining a safe distance from the big-eyed creature.

The two cars below look a little exotic.

Is that a Volvo? The sporty one I mean. The one I’m not so sure of, but that grille feature on the side looks familiar somehow. I feel I should know it.

Here’s a Cortina in Cambridge Gardens.

The fairly distinctive rear end of the Mark 1. When I was young you knew that the GB sign meant that the car had been abroad, cruising along continental roads. An Austin Something in the background.

Some of the houses look a little dilapidated, awaiting the coming tide of gentrification.

A Fiat on the right, and between the houses a glimpse of the Westway, or the Western Avenue Extention as it was sometimes referred to at the time. You can see it again here.

Some characteristic graffiti late 60s by the entrance to an access point for builders and other workers .

Above some indistinct graffiti you can see a sign for Laing, the giant construction company which built the Westway. We used some pictures which originated with the company in a few earlier posts. (A typical one) We have many more, and may come back to them again this year.

But back to cars. Here’s a crowd of them, further down the road. 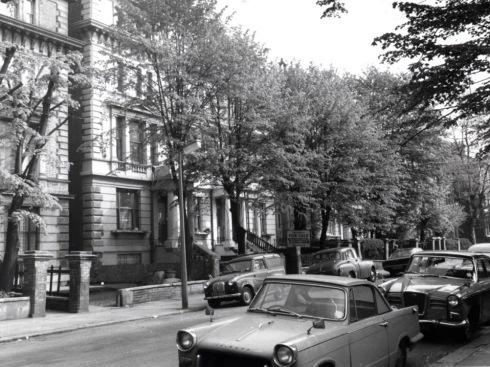 Is that a Triumph in the foreground? A line of parked cars back in 1969/1970/1971  is always interesting, to me at least. In recent times parked vehicles have become an obstruction for the wandering photographer, as I’ve found many times when looking for equivalent scenes to the ones in our photo survey.

There are other sights from the era , such as this low-slung light industrial building, which is still there today. 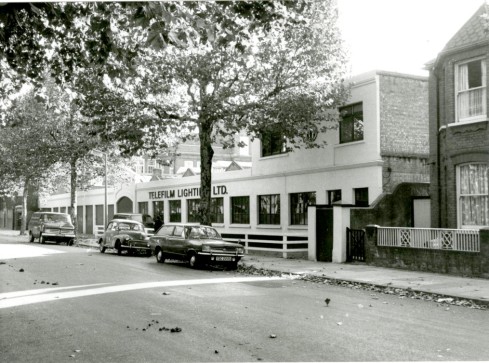 Or of course the occasional pedestrian. 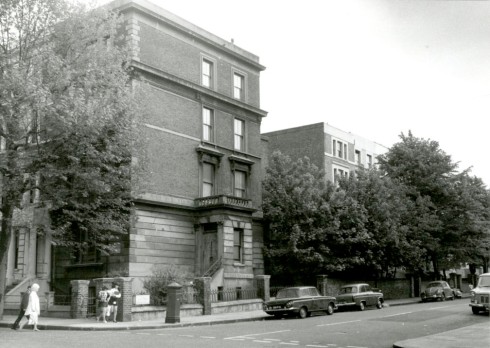 A different Cortina, with some pedestrians worth zooming in on.

Despite the unlikeliness of one of these people seeing this post, such things have happened, so if one of them is you , or you know who they are, please leave a comment. In any set of photos there are always people you wonder about. That also applies to the cars. In one of my recent posts about Kensal Road, a reader spotted his father’s Studebaker, which I found very pleasing.

Finally, back to where we started. The “new flats”, which are not so new these days but do look more colourful in this century.

And another line of cars for identification.

I’ve jumped about this week so sorry for that and also for giving out identification work and expecting wiser heads to fill in the gaps in my knowledge but as is often the case, the cars stick out for me when looking at pictures from this era. On the subject of cars here is another question. I think I’ve mentioned before that around the late 1970s, somewhere off Dalgarno Gardens (I think) there was a small street which was filled with old Jaguars, which must have been someone’s collection. Does anyone remember this, or are there any photographs? I’m sure I haven’t imagined it.

Having had nothing to report at the end of the last post in the way of the deaths of people I liked, since the last post a fortnight ago  (I gave myself Easter off as I was mostly at home) we have had two deaths in the world of crime fiction.

Philip Kerr was the author of many books but is mainly remembered for the Bernie Gunther series, following a Berlin detective through WW2 and into the Cold war. Although he lived far from the usual haunts of hard boiled detectives, Gunther was a true noir character (although far more ambiguous in his moral code than any Chandler or Hammett hero). If you haven’t read any of the books, I envy you because you now have the chance to read them in chronological order – one of the challenges for Gunter fans was where and when Gunter would start each story. (I see there is some disagreement on this point though, so follow your own instincts) Kerr also wrote three entertaining thrillers in which a football manager solved crimes, surely a first for the genre. His death at what I consider to be a young age is a great loss.

If that wasn’t bad enough, Stephen Bochco, writer, producer and showrunner of many American television crime shows has also passed away. Hill Street Blues was a genuinely innovative show which has influenced a huge number of TV programmes in many genres over the years, and I remember watching each episode avidly in the days before binge-watching. For me and others his masterpiece is NYPD Blue, 12 seasons of police work in one New York precinct in the 1990s, when New York’s mean streets were very mean. It was fascinating to watch the secondary lead character, Detective Andy Sipowicz, become the hero as he made a journey from personal disasters and tragedies to some kind of redemption, contending with his own shortcomings as well as major and minor crimes.

Be careful out there.

This entry was posted on Thursday, April 5th, 2018 at 10:29 am and tagged with Cambridge Gardens, John Rogers, Oxford Gardens and posted in 20th Century, Kensington, North Kensington, Transport. You can follow any responses to this entry through the RSS 2.0 feed.
« Crooked usage, and other tales of then and now
Mews views »

15 responses to “Car spotting in Oxford and Cambridge (Gardens)”