The pictures in the second part of this post on shops in Golborne Road were all taken by Brian Rybolt who as well as being a professional photographer also taught a photography course at the Kensington Institute in Wornington Road. This series of pictures is in the paper archive of Historytalk, the North Kensington Community Archive which was deposited at the Library in 2006. I had seen them before but only recently looked at them in detail. Like a good blogger I knew I wanted to use them here.

These pictures were all taken in 1997-1998 and were used for an exhibition, “Golborne Shops and portraits”. They show how Golborne Road was evolving into what it is today.

Two men and a monkfish outside the Golborne Fisheries at number 75. Mr Rybolt’s excellent idea was to have the owners or staff of the shops posing for him outside their establishments

One or two of the shops are in the same line of business, some of them using the same name, run by the same family.

Number 53. Note that there is a 53A, and above the shopfront, one of my favourite features in a photograph – a person at an upstairs window. See a couple of other examples here (picture four) and here  (pictures eight and nine).

Some shops of course are quite different from 1969. 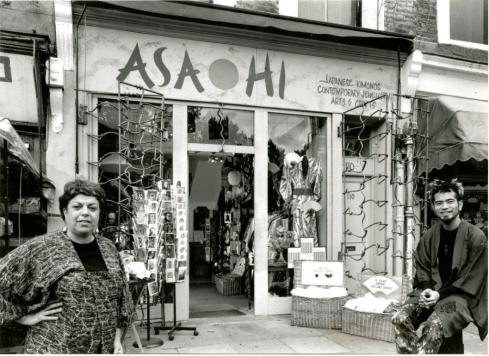 One of my colleagues remembers “the kimono shop” very well.

An outpost of Rough Trade. the music shop. (I wanted to say record shop but even though vinyl is popular again, they’re not really record shops any more, are they?). The Rough Trade I remember best was the one in Kensington Park Road. I bought many obscure LPs there (Univers Zero, Swell Maps, possibly even Henry Cow to name but three)

By the late 1990s there were more “general” shops.

“Les Couilles du Chien.” What could that mean?

A home from home.

I promised you fruit, veg and meat last week, and here is another survivor.

Fruiterers (a good old fashioned term), E Price and Sons. the three people pictured outside were members of the Price family. The business continues to this day.

Clarke, described as “corn dealers” in Kelly’s in 1969. I’ve zoomed in on this picture and you can see some very interesting objects on sale here but I wouldn’t want to commit to a general description. I’m sure one of you knows, so please leave a comment or memory, on this shop or any of the others.

We’re ending as in last week’s post on dentistry.

My thanks to the board of the now closed Historytalk for depositing their collection with the Library, but mainly to Brian Rybolt himself who now lives in Hastings I believe. Although his photographs have been deposited with us, copyright remains with him so these images should not be reproduced without his permission. Thanks also to Maggie and  Sue for background information.

There are 36 pictures altogether, a genuinely valuable historical resource. We’ve featured a number of different photographers in the last year or so, professionals and gifted amateurs but what they all have in common is that they printed their pictures. With digital photography it is possible to take many more pictures than was ever possible, but too many of them languish on hard drives. Print out your best pictures!

No extra material in the postscript this week so here’s a bonus picture:

Because I liked the dog.

And because of the dog, a child. 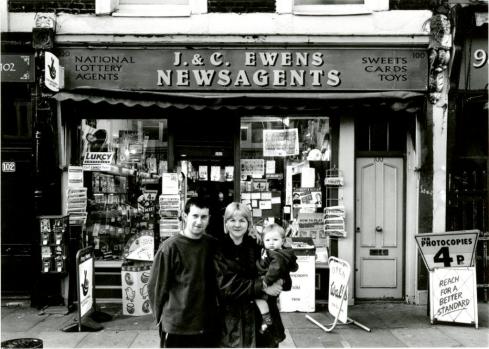 This entry was posted on Thursday, May 31st, 2018 at 12:26 pm and tagged with Brian Rybolt, Golborne Road and posted in 20th Century, North Kensington, Shopping. You can follow any responses to this entry through the RSS 2.0 feed.
« Golborne Road shops: part one 1969-1970
Addison Place – an urban fantasy »

4 responses to “Golborne shops part 2: Mr Rybolt and the shopkeepers”