Inside the old Town Hall

Kensington and Chelsea’s current Town Hall (construction images here) has been in use from 1975 onward. As we know from the recent post on its demolition , the old version was empty for nearly 8 years. So there was plenty of time to create a visual record of what it used to look like inside. Some of the pictures in today’s post were taken in 1977, but some of them must be earlier as they feature scenes of office life. But in most case the building looks, or actually was, deserted. Empty spaces have a strange kind of charm, as we’ve seen in other posts. (Such as here, here or even here). These spaces are no exception. 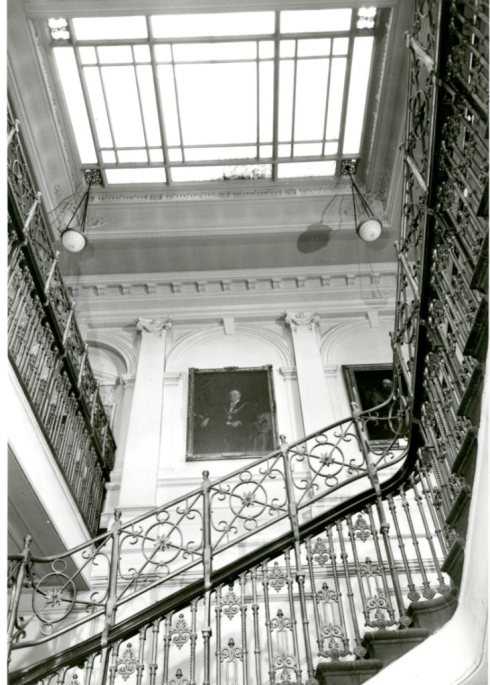 Here we look up at the skylight with a former Mayor framed by the elaborate banisters. I’m not sure who the other portrait depicts.

The third floor landing is actually referred to as the Portrait Hall.

The picture of the child in the foreground is of the young Princess Victoria and is by Martin Archer Shee. I’ve seen this picture many times and it’s slightly odd to see it in this context. (It currently hangs in the Town Hall, in the Mayor’s Parlour)

The pictures in the background are mostly more mayoral portraits.

The bottom right picture in the group of four depicts Lady Claire Hartnell, Mayor of Chelsea about 1939, painted by Martin De Hosszu. This picture now lives in one of our archive rooms in a small section I call Mayor’s Corner. Some years ago many of the mayoral portraits were offered to the families of the individual mayors, so the collection, which must have been pretty big, was scattered.

I don’t know if the Mayor’s Parlour was on the same floor as the portraits but it looks comfortable.

Below the third floor were the Council Chamber. 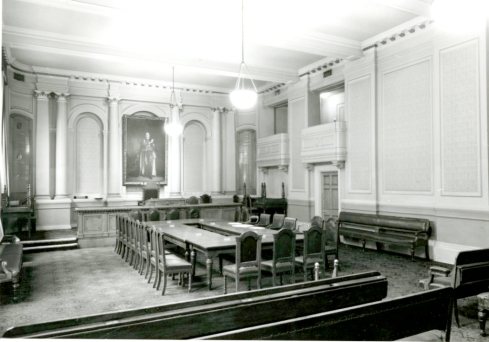 And the Large Hall (you can see it as it was demolished in some of the pictures in this post.)

Slightly less grand, two pictures of rooms for the use of Councillors. Firstly unfortunately captioned male members room (No sniggering at the back. I can remember when Councillors were always referred to as Members.) 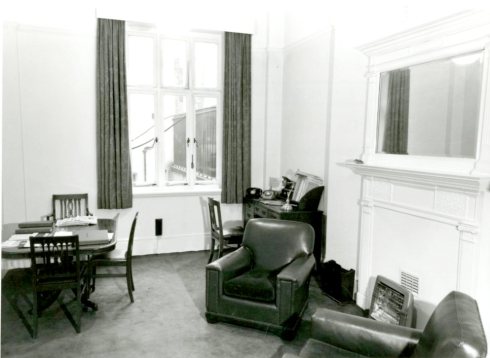 And a slightly less spartan room for Lady Members.

There were also more mundane areas.

The Information Office. This would have been in 1974.

And some non-public areas.

The roof office.  It looks snug.

The typing pool. A phrase redolent of office life as it used to be years ago.

Many piles of paper. Some of my colleagues would say that I still employ the piles of paper technique. In Local Studies, it’s hard to avoid them.

And, naturally, the post room.  Any large organisation still has something like this, no matter how far we leave the old methods behind and move towards the paperless office. 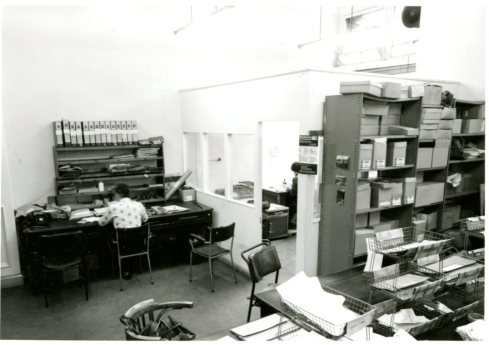 A fine collection of chairs.

We’re not finished. Back in 1977 there was this less grand back staircase.

It looks like something in a ghost story which is appropriate as it may possibly have taken you downstairs to see this.

A gathering of plaster statues (you can see one has suffered some damage to her chin). I don’t know what became of this trio of unrelated ladies. We have a few plaster statues and busts in our collection and they’re quite easily damaged so you have to be careful with them but also accept a certain amount of wear and tear along the way. They often end up in basement rooms. Perhaps this group were waiting for transport to a better place, where they would be properly revered.

This was a bit of a marathon, but it’s one of those topics that once you’ve done it, you’re probably not coming back to it. Sometimes Isabel or I write a post on a subject and we know that this is now probably the definitive word on that subject e.g. the West London Air Terminal.  This is not because we know more, but because we can bring together text and images in a way others perhaps couldn’t. And in the case of the Air Terminal and Isabel’s Paddington series, we also provide a way for former residents and employees to reminisce about these places which are no longer with us. So, although the history of municipal buildings is not for everyone , this post does preserve the way the old Kensington Town Hall used to look. Some people remember it fondly.

This entry was posted on Thursday, January 10th, 2019 at 7:47 am and tagged with Kensington Town Hall and posted in 20th Century, Interiors, Kensington. You can follow any responses to this entry through the RSS 2.0 feed.
« Forgotten buildings: The Odeon Westbourne Grove Cinema
Luker’s interiors »

2 responses to “Inside the old Town Hall”