I’m grateful this week to one of our volunteers, who found these pictures together in an envelope among a collection of pictures given to us by the Planning department .They originate in another Council department, the Health and Welfare department, which was once located in Kensington Square.

It says on the back of this picture” Appleford Road”, which means the road you see at the top of the picture could be Adair Road. Nothing in the picture remains today after redevelopment in the early 1970s.

The picture could have been taken from a new housing block. It is dated, as many of today’s pictures are, 12th September 1966. The Health and Welfare department would have been interested mainly in the condition of the housing in North Kensington which had been causing concern for some years.

Below, a view of the narrow spaces between the terraces of houses. You can see how cramped they were.

This is the space between Bramley Road and Testerton Street. I’ve looked at some of these streets before in this post for example. Those pictures were taken by our photographer, John Rogers who wanted to chronicle some of the streets that were about to be demolished.

Blechynden Street, below, was one of those. It only exists today as a stub, facing towards the Lancaster West Estate. Here it is still a place where life was going on.

Some demolition had already occurred.

That fence in Barandon Street, behind which rubbish was accumulating, is supposed to be 14 feet high according to the caption. Note the graffitti which has been concealed. The swastikas do not show some right wing message: the words read “Nazi-occupied Britain” which puts a slightly different slant on the sign. The message “Down with Taggart’s” must be personal in some way. Too early to show an antipathy towards the Scottish crime drama.

The picture below shows more rubbish building up in a back yard. But the neighbours have hung their washing up undeterred by the mess behind the wall. 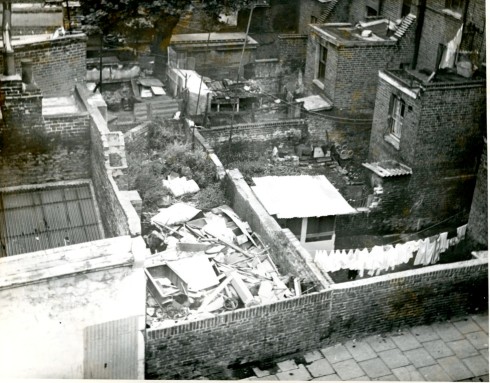 The yards were between Lancaster Road and Testerton Street.

This is a cul-de-sac where Testerton Street was bisected by Barandon Street. Although the houses look rough, they’re still being lived in. I should know the distinctive rear of that car on the right. Anyone?

Cars and other vehicles were still a focus of life and work in this area.

This scrap yard was in Bramley Mews which ran between Bramley Road and Silchester Terrace. The Silchester name only survives on the eponymous estate.

This was Bramley Road. The houses were already vacant at this point. 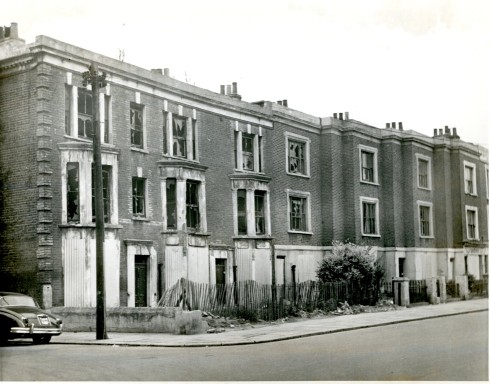 I think that’s the rear of a Jaguar on the left. You often find these relativity upmarket cars in less than affluent neighbourhoods. As I’ve said before, there was a Jaguar collector in Dalgarno Gardens in these days.

This picture is the rear of Golborne Gardens , a now demolished street near Appleford Road.

See the two women looking out at the photographer from the top floor. The one of the left is definitely smiling.

Those two women were photographed nearly ten years earlier in 1957. Was one of them the same person?

Below, a street under demolition which has not even left its name behind.

Lockton Street ran between Bramley Road and Mersey Street (another name which was not used again). One end of it was underneath the railway close to Latimer Road station.

The picture below is not dated like the others although Hazelwood Tower could have been the vantage point for a couple of the pictures. 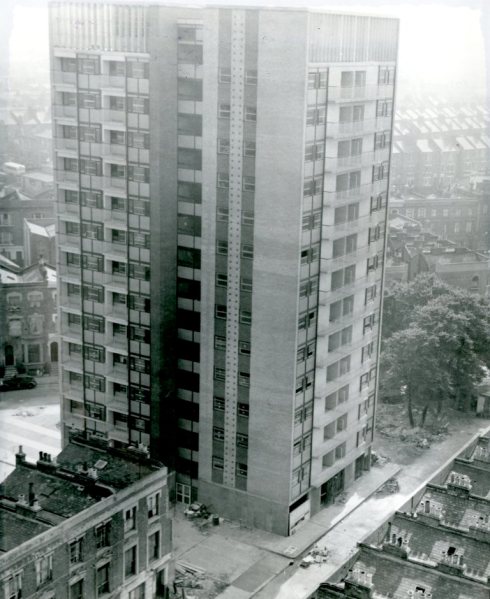 It would have been almost new at this time. You can see that it looks as if it had just materialised, plonked down in the midst of the terraced streets

We’ve jumped back to Blechynden Mews in this picture. Another instance of these mews streets being devoted to m otor vehicles.

Finally, a quick look back to Hurtsway Street, which we know quite well. I won’t go on about the cars (although I could)

Instead, take a look at the woman looking at the photographer from a first floor window on the right. If you follow that line of windows you’ll just about see another woman looking towards the camera. The men in the street are paying no attention, but take note of the pile of tires in the distance. There were a lot of them in this area when these pictures were taken.

I can’t say exactly how these pictures were passed on between Council departments before arriving here in Local Studies. But this is where they will stay as a witness to some forgotten street scenes. (More on Lancaster Road here.)

It seems appropriate this week that the death I noticed most was that of John Haynes, the creator of the Haynes workshop manuals. At one time this library had dozens of his books, a couple of bays of them down in the sub-basement to which library staff, myself among them, regularly went to pick out the relevant volume from the 600s.

The Haynes company was clever enough to produce some less serious works in more recent years, including such items a as workshop manual for the Starship Enterprise which we bought for my son on year. I also own, somewhere, a key ring with a cutaway drawing of a Ford Capri.

This entry was posted on Thursday, March 7th, 2019 at 8:38 am and tagged with Appleford Road, Barandon Street, Bramley Road, Golborne Gardens, Hurstway Street, Lockton Street, Testerton Street and posted in 20th Century, North Kensington. You can follow any responses to this entry through the RSS 2.0 feed.
« The high life – at the Royal Palace Hotel
Madame Bach Gladstone: water colours of a neighbourhood »

22 responses to “Health and welfare: streets in North Kensington 1966”