Dancing in Arcadia: the May Queen Festival

I saw Paul Wright’s film Arcadia recently shown on BBC4 (with music by Adrian Uttley and Will Gregory) which brought together archive footage about our obsession with the mysteries of rural life in the UK. I was most drawn to the footage of traditional rituals and celebrations which link us to the distant past in ways which we don’t always understand. I’ve lived in London for a large part of my life but we lived closer to a more rural way of life in my childhood and adolescence. I’m part of what a writer in Fortean Times magazine has called the “haunted generation” whose imaginations were inhabited by the paranormal and supernatural as it was seen on TV (in dramas for children and public information films) and in books of fantasy and horror. The ephemeral nature of the pre-video world  adds to that haunted quality and has an echo in my work, which often consists of assembling fragments of the past in old photographs and paintings.

I thought, naturally,  of the May Queen Festival at Whitleands College, a favourite topic of mine as regular readers of this blog know only too well.

Here, in 1900, the students danced around a maypole in the traditional way.

It looks quaint and old to us. But remember, they too were in a modern age, remembering an older world of folk dancing and singing. The Maypole dance has been revived before in Chelsea like here, forty years or more previously, at Cremorne Gardens. 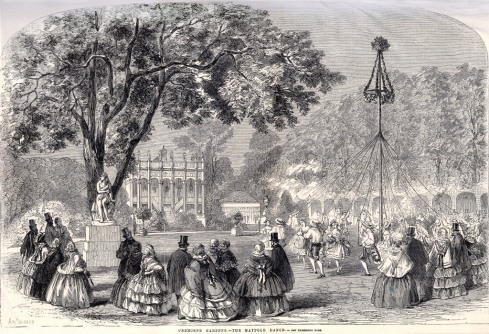 The College dates from 1855, not far off the scene in the etching. Perhaps some of the students or teachers could have sneaked away to wicked Cremorne and seen the dance. So perhaps it imfiltrated the collective memory of the College. In any case, the dance was a fixture at the May Queen Festival throughout its history. 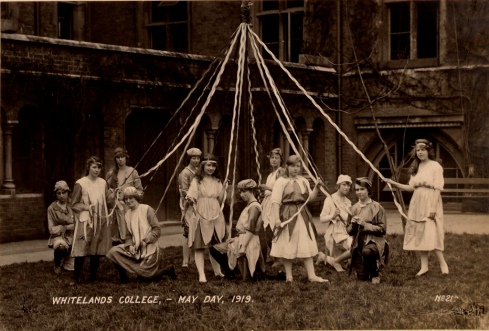 As they were again in 1921. Or, with the pole wrapped, perhaps they had finished a practice session. 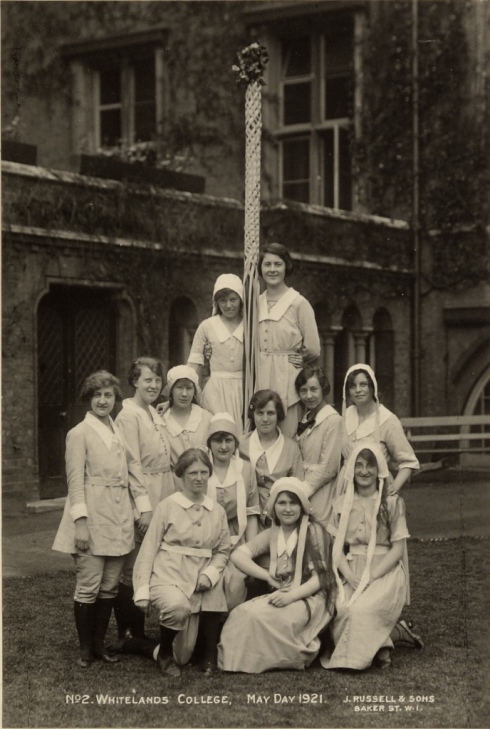 The long white gowns and fancy dress had given way to a kind of fitness uniform.

1923, two students pose with a class of local children. 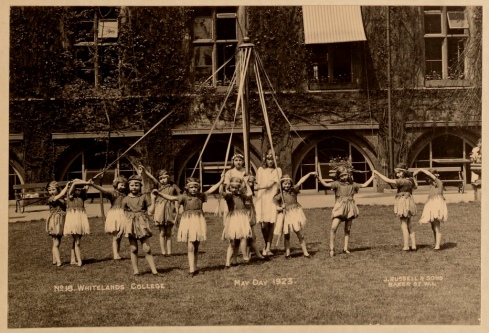 The quadrangle at Whitelands College could pass for a sylvan setting behind the walls of the House but their move to Putney in 1930 moved them into a much more rural setting. 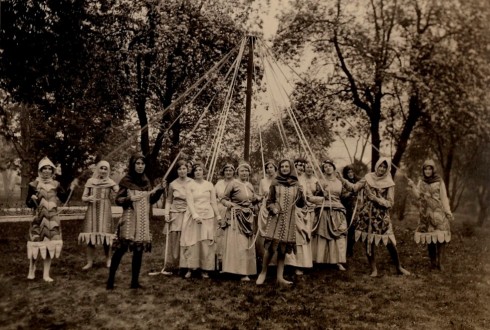 In 1931 they’re back to a more traditional look with long gowns and some interesting medieval / psychedelic costumes. 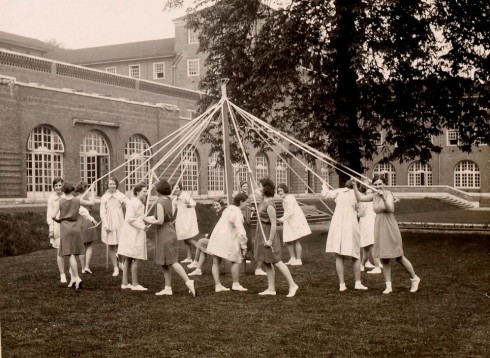 And managing the more complicated stuff. 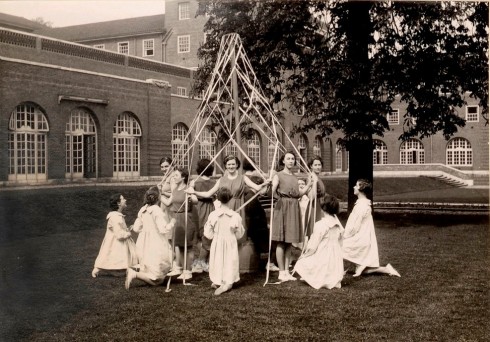 The young woman in the middle about to be sacrificed later, of course, metaphorically obviously.

The celebrations were not confined to the Maypole. 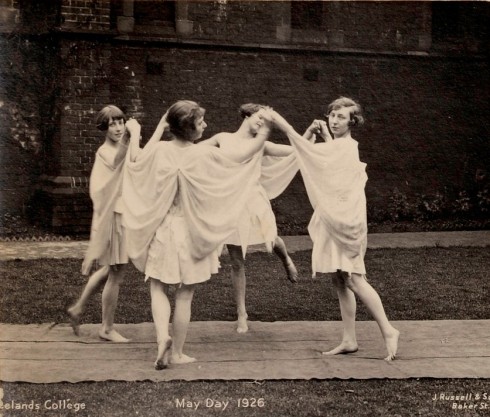 And in 1932 some Greek dancing on the grass.

Influence of Margaret Morris? Below, a little more Cecil Sharp. 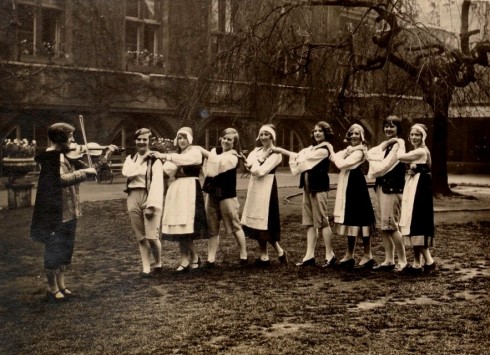 And the just plain odd. Harlequin. 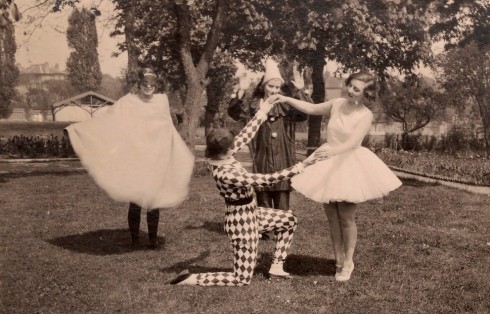 And hypnosis (or you may have a better guess.) 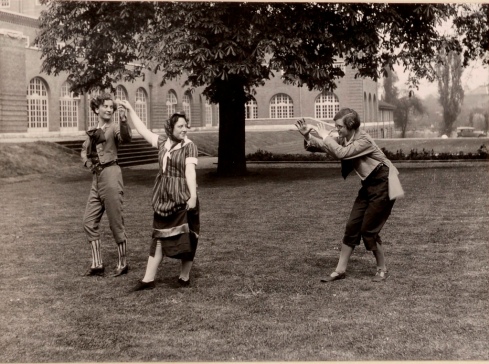 A tame version of sword dancing, with sticks instead of actual swords, and another dancing uniform. 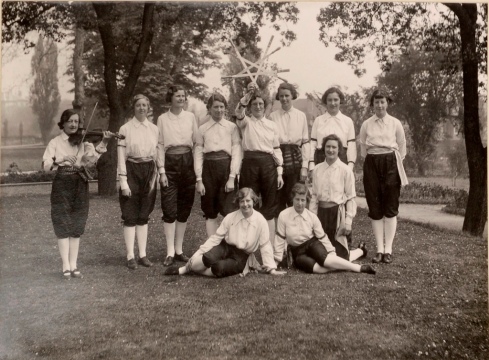 The dancing looks a little more light hearted and less haunted as the 1920s moved into the 1930s but as before the First World War, darkness awaited all the dancers in one form or another. Arcadia drifted back into the background, but it would be back later, because that idea of a timeless earthly paradise remains in our imagination. It takes me back to 1970s children’s television and as I’ve been told, Derrida’s hauntology.

With the 1970s in mind, the final image is, another in a series of pictures which remind me of 1970s folk-rock bands and quirky photos on the inside of gatefold album sleeves.

The May Monarch Festival goes on, as I always say, and with it my greetings to this year’s monarch who will be crowned this month.

I had an idyll of my own over Easter so apologies for not publishing a post for a couple of weeks. Obviously I couldn’t miss the May Queens.

It is an odd coincidence perhaps that John Bowen, author and screen writer passed away this week. (he was the author of a seminal work of folk-horror Robin Redbreast, which originally appeared in the Play for Today slot, like David Rudkin’s Penda’s Fen.)

Another recent death for lovers of the weird, that of Gene Wolfe, the author of the Book of the New Sun quartet and many other workd of science fiction. My sympathies to the fans, friends and famillies of both of them.

This entry was posted on Thursday, May 2nd, 2019 at 9:25 am and tagged with May Queen, Maypole, Whitelands College and posted in 19th Century, 20th Century. You can follow any responses to this entry through the RSS 2.0 feed.
« St Ervans Road: another era
A little bit of retail history: Kensington High Street at the turn of another century »