A little bit of retail history: Kensington High Street at the turn of another century

This is the first in a series of posts using photographs from a collection of images given to us by our Planning department. One of my volunteers has been going through the collection, sorting them out and has shown me six folders of images of Kensington High Street. So you can expect to see many pictures over the next few months, from all sorts of angles. They date from the 1980s to the early 2000s. They tell many different stories, of shops and restaurants gone by, some of which were there for years, some comparatively fleeting. Famous names, and obscure ones. You may be pleasantly reminded of an establishment you’d forgotten, or surprised by a picture of somewhere you just can’t recall.

Inevitably, we have to start by going back to a building with one of my favourite descriptions from the Survey of London. It’s number 1 Kensington High Street once more. It was built as a bank in 1888, in a style I looked at in this post. It was listed in Kelly’s as the London and County Bank. From 1939 it was the Westminster Bank, and then later the more familiar name, the National Westminster Bank, who seemed to have moved about around 1985. It stood empty for a while, and at some point was converted into a wine bar / restaurant. By 1996 it looked quite lively.

Below, a woman passes by ignoring the building and the photographer. 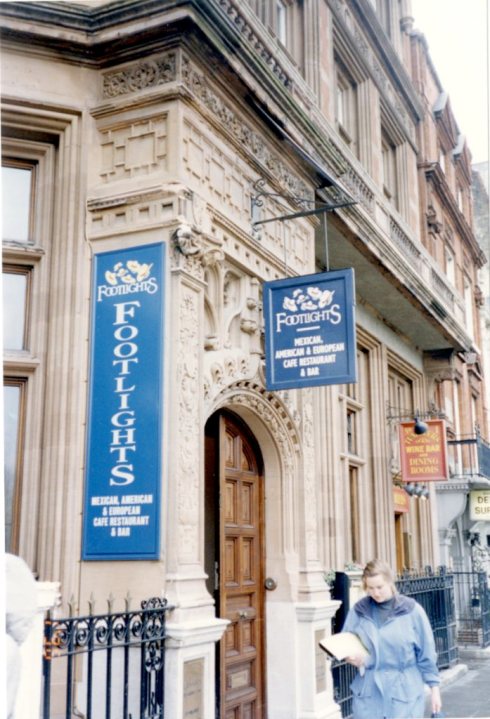 She probably missed the specials board at Tumblers. 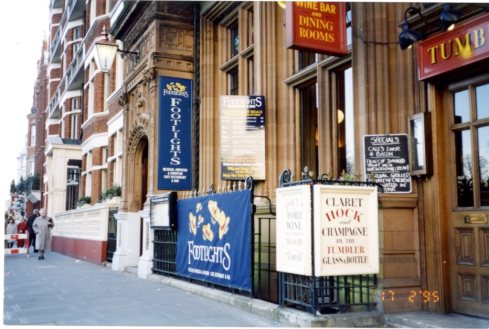 One more image, and one slight mystery. Above the ground floor windows, you can see a strip of  what is often called ghost signage. It comes out best in this picture taken a few years later.

I had a close look from a 49 bus recently, and I could only make out the word Society at the right of the strip so it has obviously faded somewhat in recent years. From this picture and others I could read “Leamington Spa Building Society“. This was perplexing for a while until I looked at drainage plans for the property, which indicated that the Society was the owner of the property until 1991. Can anyone remember the Society trading from this address?

But come on, we have to get moving. Next door is a split frontage, half of which is a Bureau de Change, next door to which is a venerable establishment.

The Goat public house which has been there more than a hundred years.

Here it is again below. One of the interesting features of this section of the High Street is the heterogeneous roof line. Whatever is happening at street level, the surviving upper levels are distinctively 19th century. Short buildings rub up against taller ones, sometimes a couple of floors taller.

There’s Le Bistingo, on the right. Some of these names will be familiar. Some not. Le Bistingo later became Giraffe, a venue for world food and music, and later still Lupita, a Mexican restaurant one of my customers recently recommended.(I’ll let you know).

Next door was Strikes.

Strikes was a hamburger restaurant, very much in the 70s/80s style (anyone remember Tootsies, or my personal favourite from the Fulham Road, Parsons?) One of the current occupants of this block is Roadster, a modern hamburger joint, much visited by men on motor-bikes picking up takeaways, a practice which must be changing the restaurant trade.

Personal reminiscence (you may skip this paragraph if you’re not interested in my digressions). My uncle had an Italian restaurant in the Wandsworth Road in the 1960s. He tried to set up a takeaway in a nearby shop to cater to people who wanted something other than fish and chips. He called it the Carry-Out, a term you can still hear in films/TV of the period which had not yet been drive out by “take-away”. The venture was not a success and he moved to Esher.

Dino’s Trattoria was another incarnation of Le Bistingo. (If this is getting complicated, don’t stop me, I can barely work it out myself).

Below, you can see a whole row of those mismatched buildings. Next to Dino’s, an early Garfunkels (which must have been Strikes). 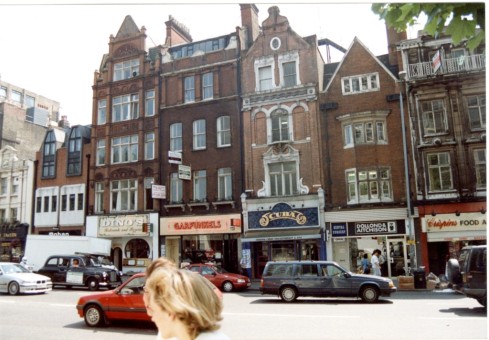 A couple of heads glide by in the foreground.

Let’s take a moment and look at the street from above. As you can see the buildings are equally varied from this angle.

We’ll come back to rooftop views on another occasion, I promise. But back to ground level.

Lord John, gentleman’s outfitter at number 23, and the Stardust Cafe.

We haven’t gone far, I know but this subject is going to be taken at a slow pace so we can afford to pause at Kensington Court.

The corner place was a pizza restaurant. 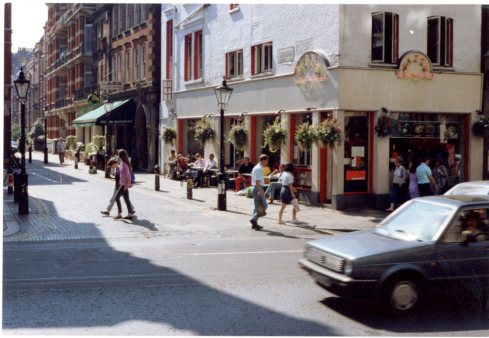 And opposite a general store.

This has become a mostly pedestrian area, with protective bollards, and little trees.

And at this time, in the early 1990s, a fairly generic Coffee Shop.

Back in the old century, motorcyclists lingered outside the Electric Lighting Station (the sign is still there). 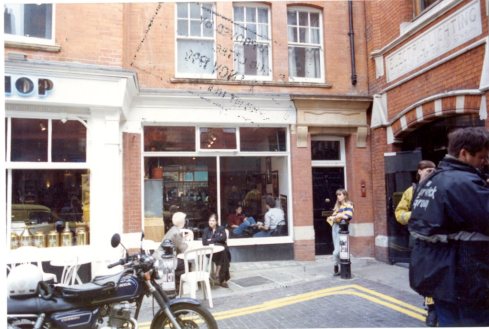 A young woman in a striped top and jeans is leaning on a handy bollard and taking a breather (from work in the coffee shop?) or just surveying the scene. What is she reading / not reading/ just holding? I’d like to go back and ask her, but of course I can’t. I had my chance in 1990 but I wasn’t thinking about time travel then. We’ll have to let her get back to her pre-millennium life.

We’ll continue in the next post, perhaps even crossing the street, but I can’t promise that. I might need a very long lie down. Ranging over a few decades and several sources can get complicated. See you next time.

This entry was posted on Thursday, May 9th, 2019 at 3:37 pm and tagged with Kensington High Street and posted in 20th Century, Kensington. You can follow any responses to this entry through the RSS 2.0 feed.
« Dancing in Arcadia: the May Queen Festival
Another post about shops and restaurants »

15 responses to “A little bit of retail history: Kensington High Street at the turn of another century”