At last the 1936 show: Barkers of Kensington

Barkers is the first of the three department stores of Kensington. Along with Derry and Toms, and Pontings it was the focus of serious shopping in Kensington during the heyday of the big stores. The fact that it is now occupied by a number of different retailers and offices doesn’t distract from the grandeur of the building.

But this building was not the first Barkers store. John Barker came to London in the 1850s and worked at the Bayswater store, Whiteley’s. He leased the first of his Kensington properties in 1870, and began the slow process of colonizing the block between Young Street and Derry Street, and the streets behind (see this post about the streets at the rear of Barker’s) The first substantial Barker’s building can be seen in this from the west in a photo by the Stiles brothers.

You can just make out the letters of the name in the distance.

The expansion was dealt a severe blow in November 1912 when a fire gutted the east end of the main block. 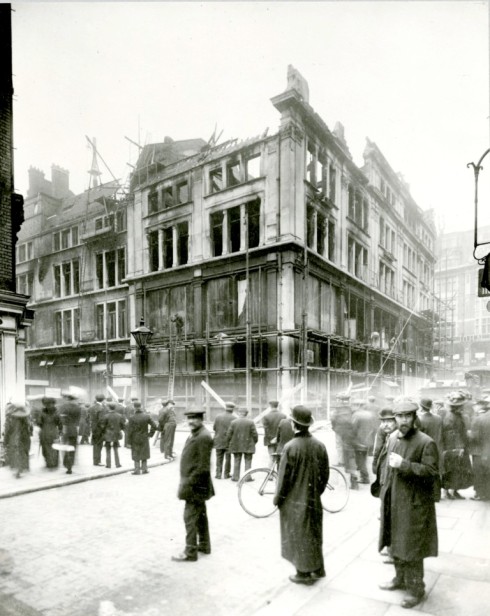 In those days it was common for big stores to provide living accommodating for their staff either on site or nearby. Barkers had been acquiring property in Kensington Square for various purpose including living space for their staff. but there were still 20 people living on the fifth floor. Five waitresses died after jumping prematurely from high windows.

This would be where the Ladymere building would be built. You can see the side of the Royal Palace Hotel on the right.

The fire damage was repaired and the work of being a huge shopping emporium carried on. 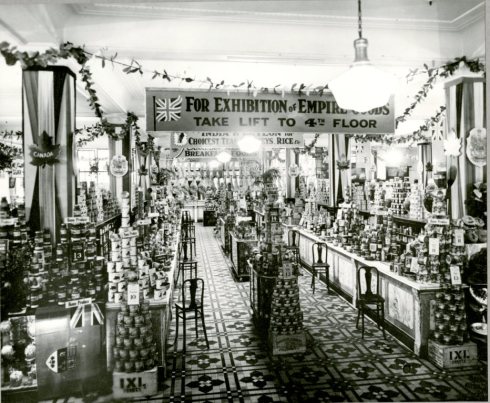 Groceries for everyday use. 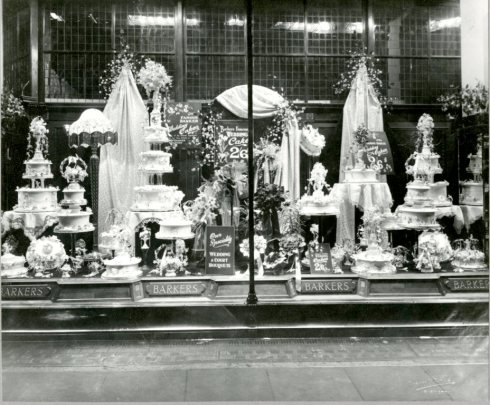 The “display hall”, 1930. Women’s fashion was a big priority for Barker’s as demonstrated by two scans from the catalogue of 1935, the 65th year of business. 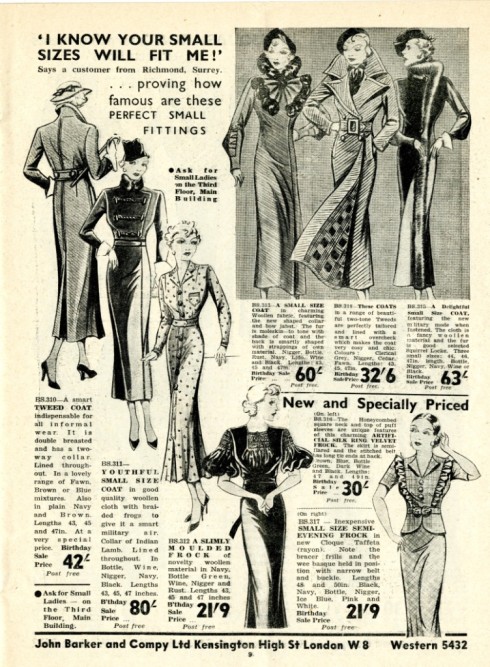 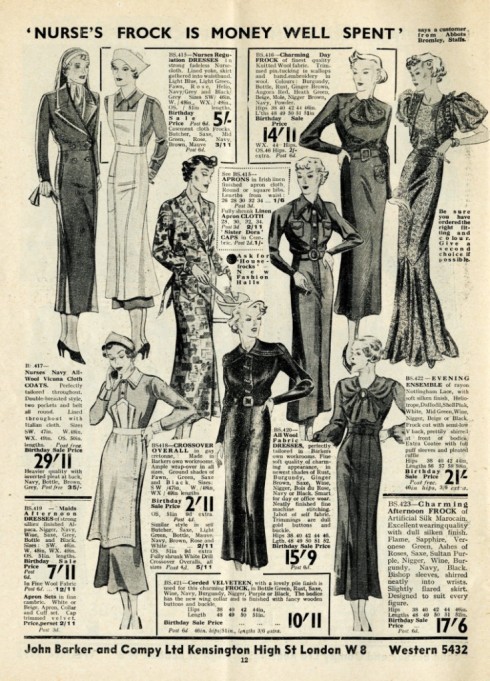 Plans for a new building began from the 1920s. The directors took inspiration from Selfridges and from visits to the USA. One of the chief directors, Trevor Bowen went there in 1919 and was particularly impressed by the Marshall Field’s store in Chicago. There were delays along the way. Barker’s merged with Derry and Toms in 1920 and their building was the first to be replaced with a modern version. (Bowen would have been particularly occupied by the roof garden, which was his brainchild and arguably remains as his most interesting legacy.) Plans for the new Barkers start in 1933 and building work started in 1936. It was an even more ambitious project than the rebuiling of Derry and Toms, with the two dramatic staircase towers which add to the impression that the building is about to start moving forwards. Work was intended to finish in 1942,  but was stopped during the War. Post war changes in planning law and building regulations also had a delaying effect so work carried on into the 1950s.

This 1951  picture shows that the last section of the frontage was not yet complete. It shows how the shape we know now was the result of another road widening. Note the huge sign warning about the bottleneck (still a feature of this section of the street). If you look in the centre distance you can see a big sign over the Slater’s store. Have a look at that here.

This picture shows the finished building and how well it matches Derry and Toms. 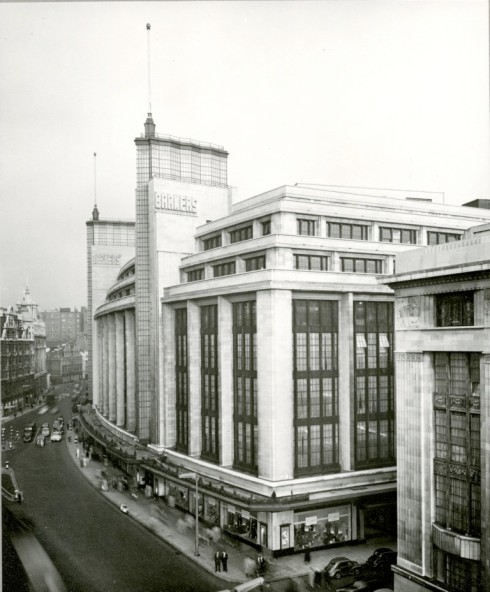 Lowly Pontings (“the store for value”) limped on in a less  impressive building but was the the first part of this retail empre to go. (See one of my early posts here). I think you could say that in the 1960s, the zenith of department store shopping had not yet passed so Barker’s glided on into my teenage and adult life. Derry and Toms morphed into Biba and later Marks and Spencer and Gap In the 1980s and 90s but the Barkers building remained as the biggest thing in the High Street.

This picture looks west in a similar way to the first photo in the post. 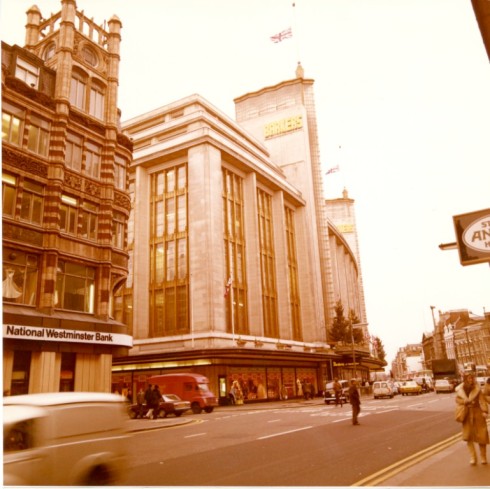 While preparing this post it was inevitable that I would zoom in on this view.

Along with the lady’s nice coat (a winter picture, confirmed by those Chritmas trees), you can see a green bus.

Although you can’t make out much detail, Matthew soon found a picture of that actual vehicle using the strange powers of the enthusiast. 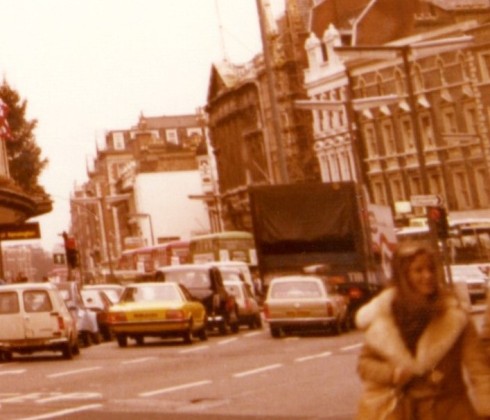 From the same date, the west entrance, with a toy display. 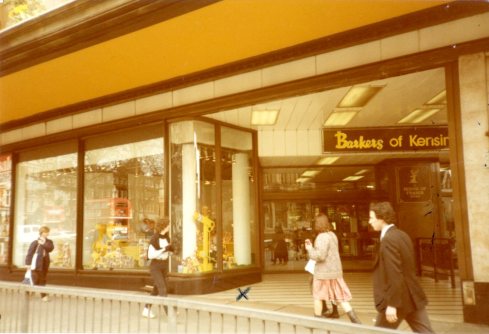 And the banner: Barkers of Kensington.

Below, a handy set of images showing some of the interior shops after this part of the building became a kind of small shopping mall. Barkers Arcade was a name I found a couple of times.

(Was there actually a branch of Hatchards there, or has the photographer inserted some shops for demonstrating what was possible?)

Despite changes in use and the decline of department store shopping the iconic building remains almost as it was originally envisaged, seen below in an architect’s drawing of a slightly wider high street in a slightly grander London.

I haven’t done an obituary lately so this week let’s pay tribute to Roky Erickson, psychedelic pioneer with the exotically named Thirteenth Floor Elevators. Do you remember any of the other equally hallucinogenic names from Lenny Kaye’s compilation album Nuggets? (The Strawberry Alarm Clock, the Electric Prunes, the Nazz? And many others) Roky unfortunately was a victim of excessive drug taking and spent some years in mental hospitals. But he came back and recorded more general weirdness in later life. I had a couple of singles by him in the 1980s, my personal favourite, Bermuda but not forgetting Two Headed Dog, which features another couplet I love: “Two headed dog, two headed dog / I’ve been working in the Kremlin with a two headed dog.” I almost never use the word gonzo but that song deserves it.

This entry was posted on Thursday, June 6th, 2019 at 10:54 am and tagged with Barker's, Kensington High Street and posted in 19th Century, 20th Century, Kensington. You can follow any responses to this entry through the RSS 2.0 feed.
« Another post about shops and restaurants
Happy shiny people: the ideal world »

5 responses to “At last the 1936 show: Barkers of Kensington”