I love the illustrations that sometimes come with architectural drawings and planning applications. They depict an ideal near future for a place we know well, clean and well appointed, inhabited by happy, well dressed people enjoying new and improved facilities. Sometimes the same future can seem a little dystopian depending on your point of view. In the course of examining images in our collection I have seen a few abortive plans which make me glad that somebody saw sense or just dropped the ball. But mostly you’re looking at something that happened. The shiny happy people in the illustrations have played their part and moved on to whatever alternative reality is their next destination. Those of us left behind made the most of what we were offered.

“Miss K”? Was there ever such a shop? Or is it a well known chain in the other world, where airships always haunt the skies? It’s “Miss Kensington” of course. The “right on shop” (look closely) “Victoria” of South Kensington sell jewelry and watches. Even I can’t make out the last two shops in the distance. Those two beaming men are just passing a shop simply called Fashions. The artist, John S Robinson, couldn’t come up with anything more than that.

As I mentioned in my last post, the third of Kensington High Street’s department stores, Pontings, was the first to close and be demolished. It had been located on the corner of Wright’s Lane and was attached on its west side to the arcade which leads from the street to the tube station. At one time the arcade would have been lined with display windows for Pontings or its sister store Derry and Toms.

That’s the Pontings side. In the centre, facing the side entrances of the stores was a WH Smith kiosk. ( A great word for a useful object.)

On the other side, an entrance to Derry and Toms, which followed Pontings into retail history a few years later. The arcade was colonised by a variety of small businesses.

We’re going to veer off into anecdote now. One of my colleagues once asked me if there had ever been a fountain in the arcade. I didn’t think so but as some of you always knew, there was. I recently found some pictures that prove it.

My colleague was very gracious and didn’t give me a hard time for my skepticism. Isabel added insult to injury though by recalling that she had been a member of a school choir which had stood by the fountain singing carols in the early 1990s . Although I was around then I still can’t remember it although oddly, Cafe Gstaad  (now Pret) rings a bell. The conclusion must be never dismiss any recollection and be patient. The pictures you need may be waiting for you somewhere.

In the meantime let the happy people have their moment. John S Robinson has made the arcade a  little bit wider and taller. It’s always bigger in the other world.

The elegant, possibly haughty, lady in the white hat is walking away from the tube entrance “Fashions” has become Austin B..something.

In the next picture, which seems to look at Boots, Mr Robsinson takes us well into the other world with a gallery (Gallery Eight), a News kiosk, some kind of seating area and another glass fronted shop in the distance.

That perky woman is suggesting something to her partner. A leisurely lunch perhaps? Or is he asking him to turn around and walk past that older couple right into the other world?

Outside, there are more accurate, and optimistic views of the corner.

Looking south down Wright’s Lane, this is the plan as it was executed. The other world still had the Promenade. Looking west the view is spacious, and relatively underpopulated. 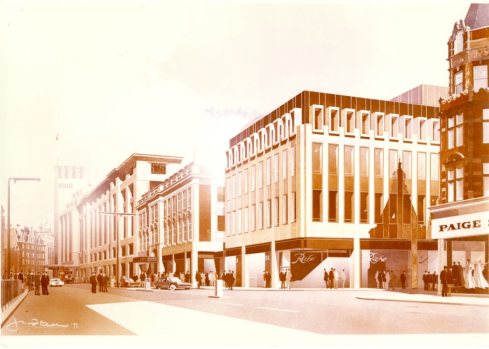 Finally, for the other world, the view down to where Wright’s Lane will join Marloes Road.

For illustrative purpose only. Another couple lean in close for conversation.

The west side of Wright’s Lane has been developed all the way down to the point where it meets Marloes Road. Boots on the corner, the corporate offices of the Warner Group, an apartment block, and then the Tara Copthorne Hotel. The space where Scarsdale House once stood has been filled in by modern buildings.

We can look back though as I’m sure you were expecting me to say.

This is the hotel site under development.

As is this. I’m not sure about that chimney.

This earlier image shows the site as a car park, with the station naked.

This is a very interesting picture. You can see the rear of the Derry and Toms and Barkers buildings, Heythrop College, even the distant Royal Garden Hotel and the spire of St Mary Abbots. Eveything on that side of the railway line is still there today more or less. But the tranquil car park, which if magnified could provide much material for car spotter, is all gone.

The picture below, of Kelso Place, with some provisional structures added in red ink is more difficult to figure out today. 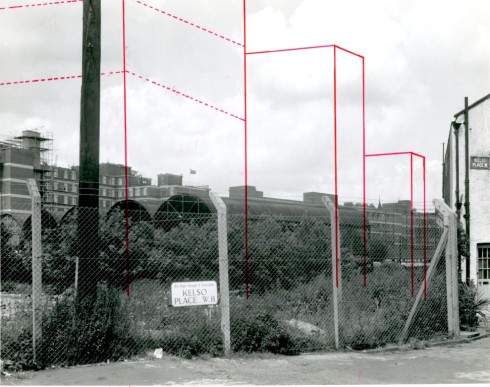 The modern Kelso Place runs over the point where the railway line goes underground for a short distance. Those structures you can see through the fence must have been something to do with the railway but they’re not part of the modern station. Any answers?

Finally, leading into a future post is an aerial picture.

Kensington Square, the Barkers building and part of the roof garden itself, with some private gardens at ground level.

Look back at the car park picture and have a look that wall which borders the railway line.

If you’re ever in the arcade, head towards Boots but turn left before you get to the entrance, past the currently closed chocolate selling unit. You can still walk along next to that wall and make your way through the space next to the railway tracks to Scarsdale Place and back to Wright’s Lane, past the hotel entrance.

It’s a little crack in  this filled up space which gives you a look at the undeveloped past.

I’m writing this first draft in a waiting area at Chelsea Westminster Hospital. The A&E department has certainly changed since I last mentioned it in the blog. There is still a certain amount of waiting to be done.

Since the last post, the science fiction world has lost Paul Darrow, who played the anti hero Avon in Blake’s 7, a programme for which many of us retain an inexplicable affection.

The world of blogging still has me for the moment, I’m pleased to say.

This entry was posted on Thursday, June 20th, 2019 at 7:50 am and tagged with Kensington High Street and posted in 20th Century, 21st Century, Kensington, Shopping. You can follow any responses to this entry through the RSS 2.0 feed.
« At last the 1936 show: Barkers of Kensington
Kensington Roofworld »