Christmas Days: a couple of pictures of Chelsea in the 30s

I bought both of these pictures on eBay, having been shown them by a friend. They’re only really connected by the decade in which they were taken. We don’t have very many pictures from that period though, so it’s worth putting them together for one of these mini-posts.

1937.Chelsea Bridge. The 51st Anti-Aircraft Brigade is the caption for this convoy of odd looking equipment heading south across the recently built bridge. The Brigade was a unit of the Territorial Army  based at the Duke of York’s Headquarters just off the King’s Road (now the Saatchi Gallery).

What is that stuff on the trailer? Military experts will no doubt tell us in due course that the giant metal nipples  serve a perfectly reasonable purpose. I can’t find an angle in which that sign is legible. Nor can I complete the phrase “Load not..” on the rear of the truck pulling the trailer which appears to have a large metal cylinder in the back. The two vehicles ahead of the truck are clearly pulling anti-aircraft guns.

It’s not strange that in 1937 plans were already being made on how London would be defended from air attack. I dealt with a civil defense exercise in 1939 in this post.  The man on the bike doesn’t seem bothered and the two pedestrians look quite calm. 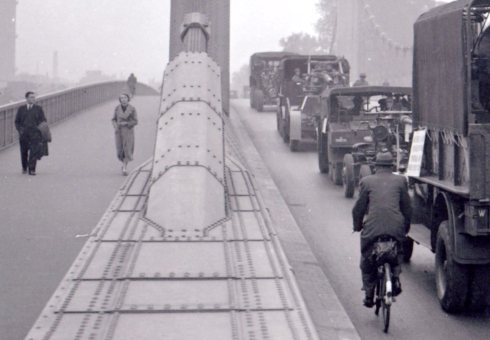 The picture wasn’t very expensive. I paid a little more for this one.

I liked it because it was very clear, and even though it was just a view looking north up Edith Grove, across the King’s Road, with Fulham Road visible in the distance. There is good detail on  F W Norris’s Wine Stores, featuring draught and bottled beers. The few passers by are good too especially the two girls in the foreground wearing distinctly 30s hats. 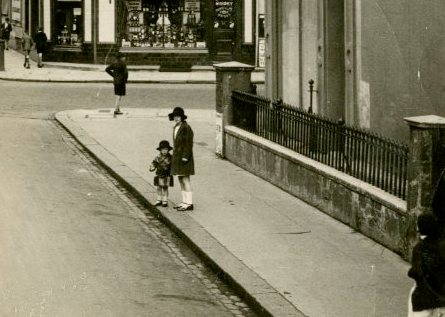 I didn’t actually unwrap the picture from its plastic and cardboard packaging until I came to scan it and then I turned it over to find that on the back was some information which completely changed the picture.

The picture came from a newspaper picture library. There is a short account of an accident in which a brother and sister on a motor bike travelling north to south towards their home in Clapham were struck by a car in the early hours of a Sunday morning. She died instantly, he later at a hospital. The picture has been cut from a larger piece of paper. It looks like there was a diagram below the short account in red ink.

So my attractive picture of a Chelsea street in 1930 becomes a record of sudden death.

Miscelleany: Madonna through the looking glass

Some of you will have read the recent post about the King’s Road in the 1980s featuring photographs by my friend CC. One of them was a monochrome version of one of her friends, a hairdresser who works in the King’s Road dressed as Madonna for a Christmas Eve party at the salon. CC told me there was a colour version so I thought that would look good for one of my Christmas posts.

This one is one of “Madonna’s” co-workers, also dressed up for the day. 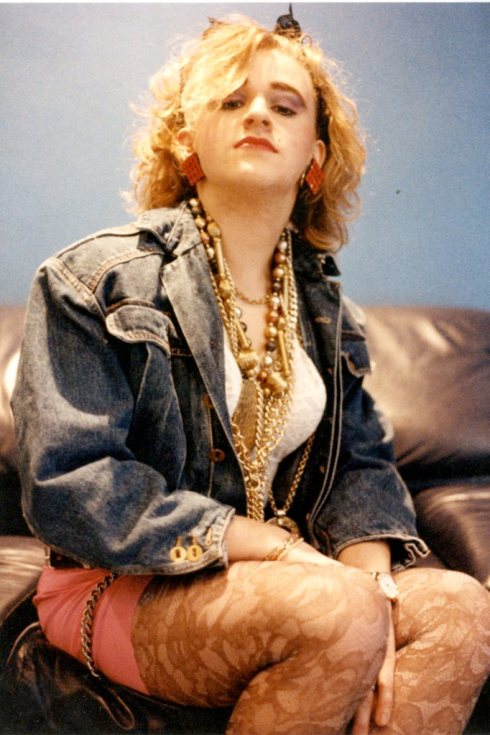 And the back view, which rather gives the game away. 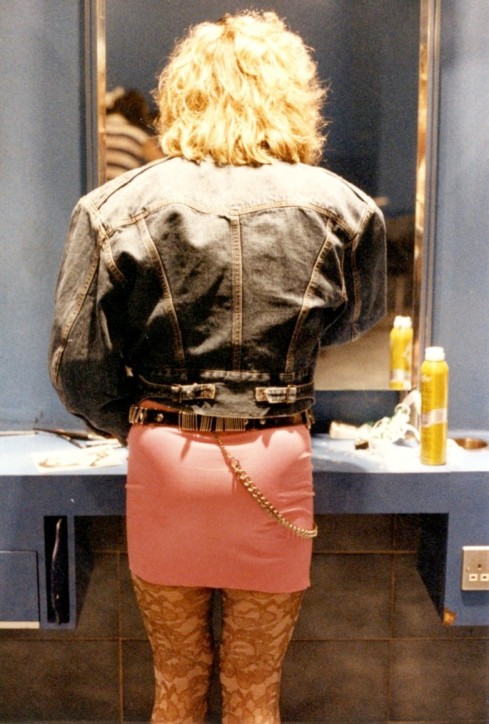 I should add that the gentleman himself has given permission for these pictures to go up on the blog.

Christmas Days : Bignell – a childhood in the 50s

I often turn to Bignell at short notice when I’m not sure what’s coming next on the blog. There are so many striking images in our collection that even a random selection works. I’ve been working on a full length post with a particular theme, looking through the collection for suitable pictures but scanning any that appealed to me. In the course of this I came across enough images for one of these short posts. Most of these pictures come from the 1950s when Bignell was first making a name for himself, and they all feature children.

If you’re not familiar with Chelsea Bridge you might think they were doing something dangerous, but they’re not. The parapet is pretty wide at this point.  The picture is dated 1954. Battersea Power Station, in the background is still under construction. (It was built in two phases, one in the 1930s and one after the war. Here Station B is still awaiting the completion of one of its chimneys.)

The boys in this picture are in mild peril of falling off. I admire them for the sheer silliness of what they’re doing.

The dog is clearly amused. This is 1956, and another of Chelsea’s bridges, Battersea.

Speaking of Battersea, what about the Festival Gardens in 1954, a remnant of the Festival of Britain which lingered on for many years although I think this feature had gone by the first time I went to Battersea Park. 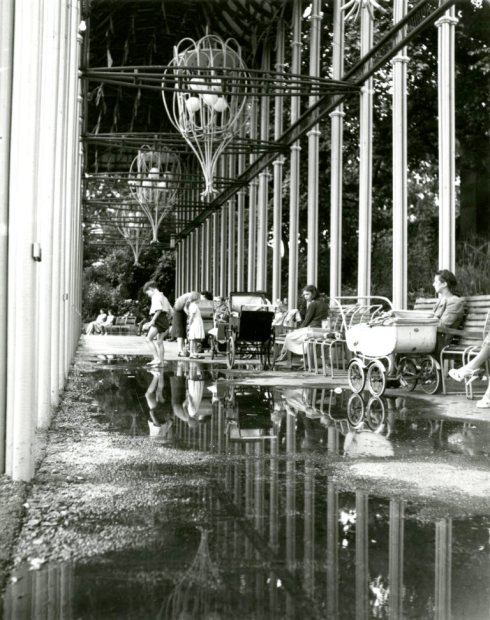 A quiet spot for mothers to take young children, with the possibility of water- based play for older ones. There was a paddling pool not far from this spot but on this particular day you could get your feet a little bit wet if you fancied that. No danger.

The duo below are doing nothing risky either , in 1959.

In another part of Chelsea in the same year, a more decorous pastime. 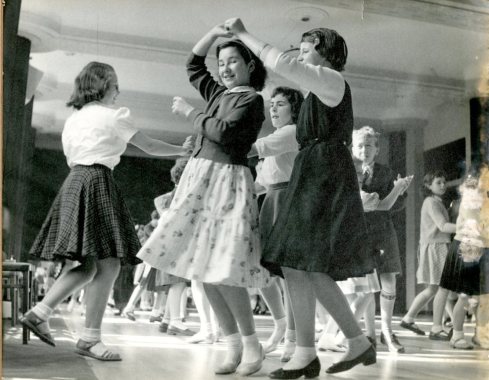 The girls are having to dance with each other at Victor Silvester’s Dance Studio at the Gaumont Cinema, in the King’s Road. This is the rock’n’roll era, so are they jiving? (I’m no dance expert)

I recently attended the premiere (at the gate Cinema) of a film called Two Potato, an exploration of urban play made by pupils at Colville School in conjunction with Digital Works, a regular partner of the Local Studies library. You can  see it here:

(Full disclosure: I’m among the people who get thanked in the credits.) There’s usually a Q and A after the film in which someone asks the film makers if they would rather have lived in the days depicted in photos by Bignell and others, when kids apparently wandered the streets looking for odd things to do, as in today’s pictures. Rather than the screen dominated lives of modern children. I always like it when someone says no. I enjoyed my 1960s childhood, which did involve a certain amount of wandering around unaccompanied by adults, but in my opinion there’s nothing wrong with modern childhood. There’s more Lego for one thing.

Today’s monkeys in the archives are working on a private project.

Quentin and Vinnie are doing the searching while Steve keeps a look out. 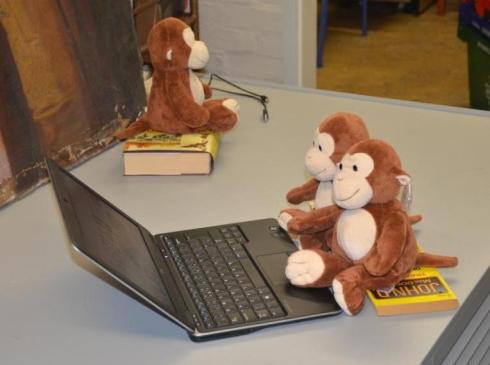 This is Chelsea Bridge, the first Chelsea Bridge. It was opened with some celebration in 1858. It looks a little like its younger cousin the still surviving but beleaguered bridge at Hammersmith, opened in 1887. Unlike Hammersmith less than a hundred years passed before a new Chelsea bridge was needed to cope with the demands of traffic both across and under the bridge. 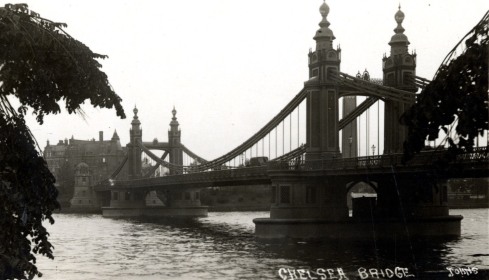 The old bridge was demolished in 1935. It’s always easier to demolish than construct, even with bridges. By March 1936 the work had begun. 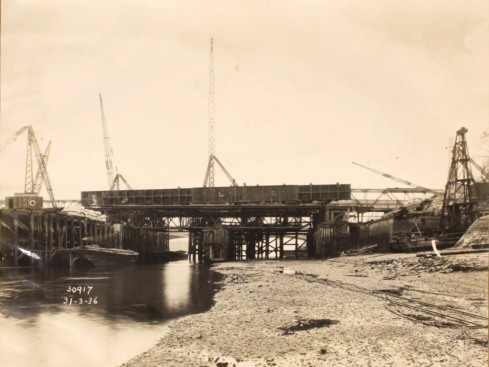 The steel frame on the south channel. 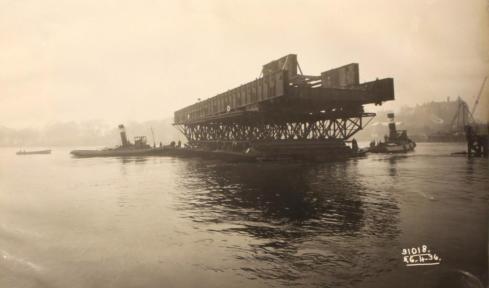 April. A misty morning. The first float of the steelwork. Later that day the tug boats get the steelwork to the north channel. 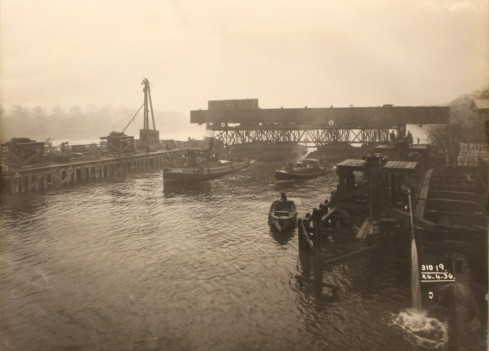 Inside the north abutment: 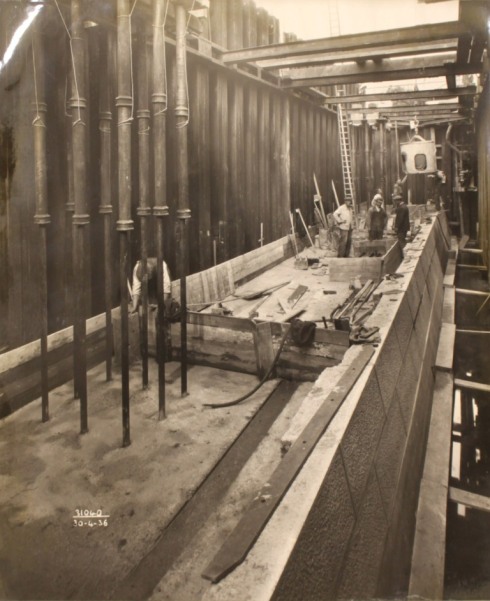 You can see water below but the workers are now inside the bridge.

Looking south here is the emerging bridge as a tangle of steel, wood and concrete with a self-explanatory notice.

In the distance, the trees of Battersea Park on the right and the faint outline of a gasometer on the left. If you know what you’re doing you can already cross.

Inside the structure again, lamps shining the length of the new bridge. 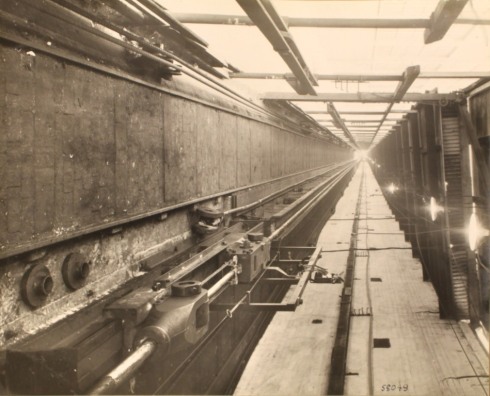 Months have passed and a new year has begun. Looking south again.

The shape of the new bridge emerges from the superstructure. Workers are visible across the length of the bridge.

Wet concrete is smoothed out. In the distance the Lister Institute.

You can see the first part of Battersea Power Station, the A station, generating electricity since 1933. The other half was not built until after the war.

The bridge is almost complete. The surface awaits the cars, trucks, buses and feet.

Now it’s done. The supports are all gone and the bridge looks like it has always been there. The river flows past the clean lines of the piers. The old bridge is now just a memory preserved in a few photographs. 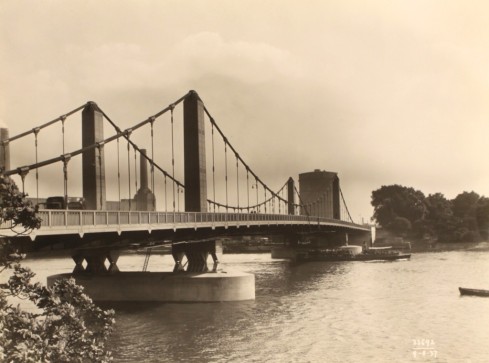 These photographs come out of an album which sat in the offices of the builders as a record of a job well done. Until one day the office was cleared. Somebody had the sense to take it home. Eventually it appeared on eBay, where most things end up these days.  Which is where I came in. And now we can all see how steel and concrete and the hard work of many men made the bridge.