The first point is one I made on that first post. We are used to thinking of the Edwardian period as the last great period of formal dress for women and men, the last gasp of 19th century fashion and the ancien regime of costume before the revolution of the Great War and the 1920s. Sambourne’s pictures show another side to the early years of the 20th century, a casual attitude to dress demonstrated by the mostly young women in them. The roots of the dress revolution are apparent from the 1890s onwards in candid photographs and picture postcards. Sambourne’s pictures are one instance of this movement.

The other point is another one I have made on previous occasions. We shouldn’t think of these photographs as curious items from past times. These pictures are of the present. When Linley Sambourne roamed the streets of Kensington with his hidden camera between 1905 and 1908 he was catching images of the now.

Have I spent too long on opening remarks? Let’s look at some pictures.

20th July 1906 in Notting Hill Gate – even in summer gloves are worn and one of these two women carries a muff. They’re in a hurry, striding along, oblivious to the photographer.

Back in May of the same year in nearby Kensington Church Street:

This woman is slightly more formally dressed than the first two. Perhaps she is on her way to work. Sambourne liked to record women at work as below:

This picture taken in Cheniston Gardens shows a young maid engaged in the perennial and tedious task of cleaning the steps. You might think this is another example of Sambourne’s secretive gaze, spying on her working life but to me it has the look of a posed picture. Sambourne had many contacts in the Kensington area across the social classes – people he used as models for his studio photography and the young maid may have been one of them. I think it’s more obvious in this image:

A different set of steps, and (I think) a different woman but she looks to me as though she is responding to a request from Sambourne to hold that pose for a moment.

There is probably a great deal to be said about the interest shown in maids by gentlemen of Sambourne’s age and class but in the absence of firm evidence we can probably acquit him of improper thoughts. As has also been discussed on the blog and in comments, the concept of privacy with regard to photographs taken in the street was underdeveloped in Sambourne’s time. It’s probably true that as an upper middle class man he thought that his right to pursue his art outweighed any violation of his subjects’ privacy. (Some photographers still believe that today.)

To complete a trio of servants here is a maid taking a break, no doubt well deserved: 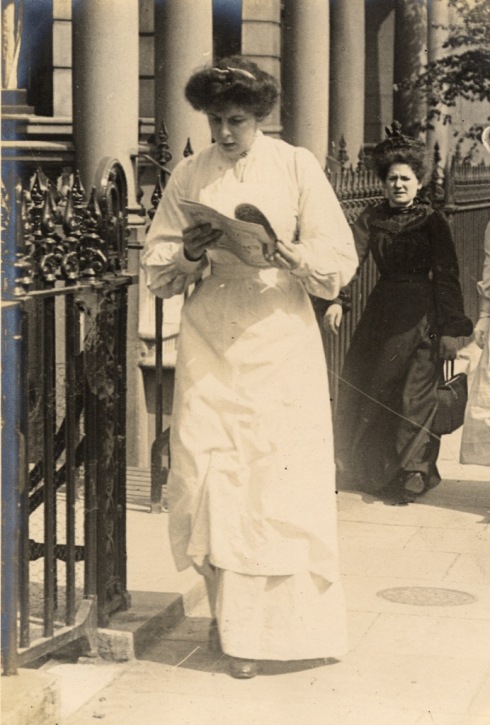 The next subject is someone much closer to Sambourne’s own class, a distinctly middle class married woman.

In May 1907 she is escorting her two sons along a tree-lined Cromwell Road with just a few horse drawn vehicles in the background. Cromwell Road looks more like a prosperous wide street of upmarket houses as it was originally intended than the major transport artery of today. 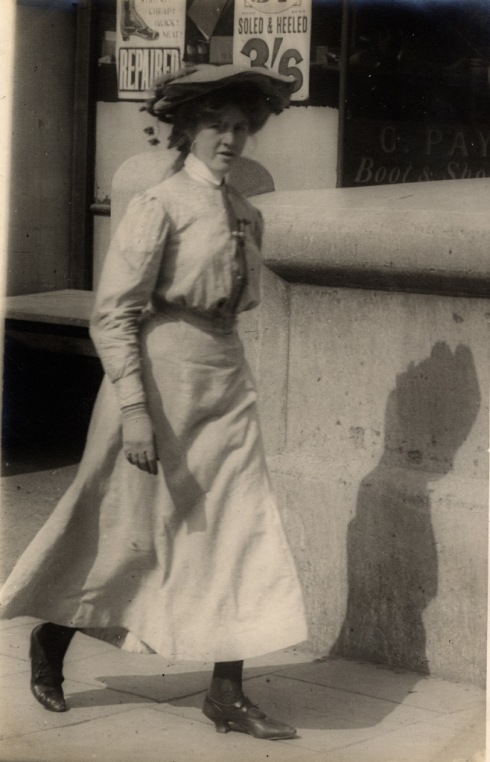 This is one of those pictures where the woman is looking right at the photographer as though she knows what he is doing.

I think this may be a picture of the same woman from behind. They were both taken on the same day in the same place so that may be a reasonable assumption.

Perhaps you recognize this woman:

I think it’s the same woman who featured in the first Sambourne post photographed in Earls Court Road in 1905. (I’ve looked back and forth comparing details of dress and features. I know that some of my readers are very eagle eyed so I won’t commit myself absolutely.) It’s a slightly less flattering image but that is a feature of candid photography. Everyone has seen poor pictures of people who normally look good in photographs. I would say she had been caught by the flash but I’m not sure if Sambourne’s camera had one. Actually the detail I like is the dog sniffing something out in the background so I hope she would forgive me for showing her not quite at her best.

This picture is another example of the big hat, still a common fashion item at the time: 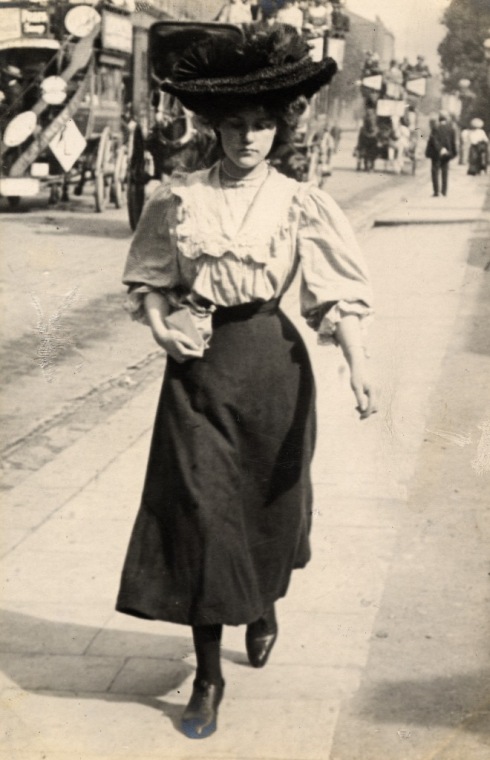 This view is of Kensington Church Street, with some horse drawn buses in the background.

Another family group, from the front and the side:

This was in St Albans Road, well off the main streets of Kensington and well out of Sambourne’s main patch.

Another of his pictures from the rear: 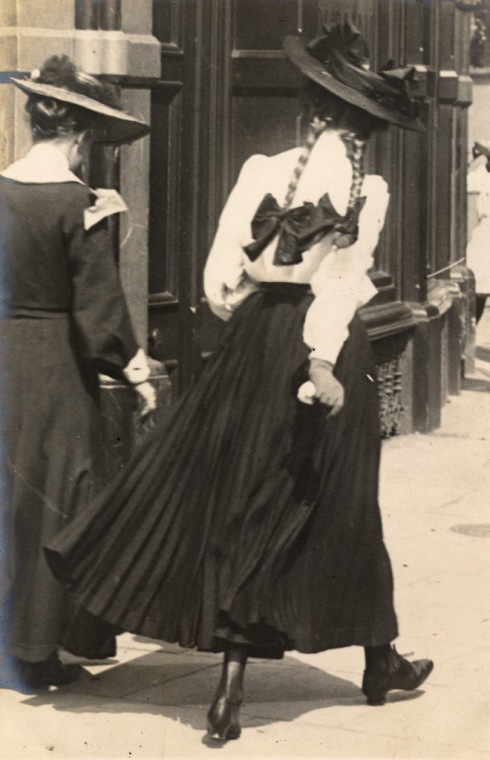 Finally, I’ve been saving one of Sambourne’s best pictures till last. This picture is simply captioned Kensington. It looks a little like one of the streets running off Notting Hill Gate but really it could be any number of streets.

Sambourne captures a young woman of the early twentieth century walking confidently forward looking straight into the eye of the camera. Forget the photographer. She is looking out at us.

Just as this time last year I’m about to start a month of posts related to this year’s CityRead campaign. The book is A week in December by Sebastian Faulks. The posts will all be transport related and the first will be A tale of two tube stations.

One of the many bloggers who wrote about Sambourne after my first post coined the phrase Edwardian Sartorialist to describe him. I can’t remember which one, but my thanks to her/him.

The Sambourne pictures belong to Leighton House Museum. If you would like to reproduce any of them in a book or magazine ask my colleagues there.

The other Linley Sambourne posts are here (Holland), here  (Paris)and here (at the beach).

The text is written by me so if you run a website based in Spain which likes to reprint vintage photographs why not write your own words?