According to the authors of the Survey of London volume four (1913) a building called Cheyne House, in Upper Cheyne Row was at the time of writing “in a derelict condition” having been “untenanted for many years“. It consisted of “two or three different blocks of buildings, none of which appear to date from earlier than the eighteenth century”. The condition of the property, it is implied, was the responsibility of Dr Phene “who had used the house and garden as a museum.” Dr Phene was probably also responsible for covering the eastern wall with fleur-de-lys. The doctor’s dubious activities (“so much was the place neglected“) meant that the interior of the house was “rapidly falling to pieces“. The authors sum up: “the whole house is in a dilapidated condition”

We know something about the good doctor. I’ve written about him before some years ago. You can also find an article about him in Fortean Times magazine of July 2013. As far as the condition of the house goes, i expect he had his reasons. He had died in 1912, so the authors of the survey could make their judgement without fear of contradiction.

An artist named Juliet Nora Williams became a little obsessed with the house, or at least a small feature of it: the gates. Here they are in autumn: 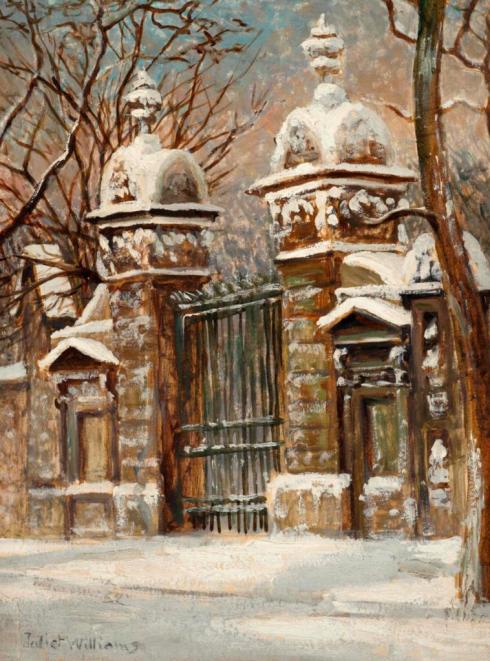 You can guess what might be coming next. Two more pictures? In fact, there are several more than two, some amounting to little more than sketches.

I can’t say why Miss Williams was so obsessed with a single view, but she was. I set about assembling everything we had by her, perhaps hoping I might find out why. Spoiler alert. I didn’t. But one of the pictures was this one. 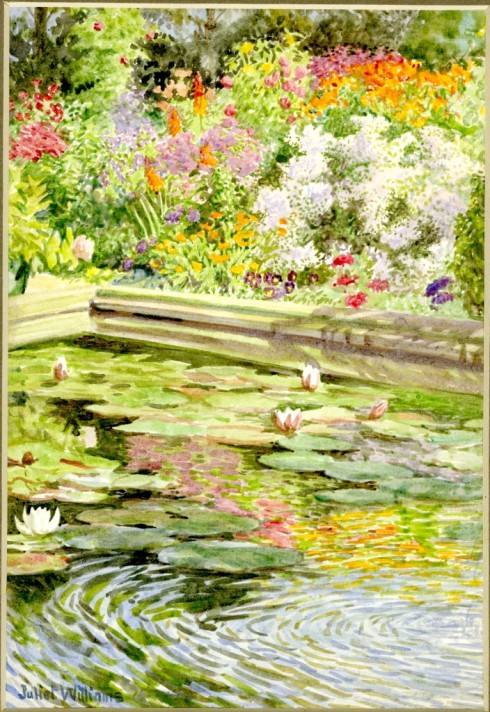 It’s a pretty enough piece, reminding me a little of Estella Canziani (although not as accomplished) . I recognize the spot though, a kind of walled garden and pond in Battersea Park, which I have visited many times. (Like many places it was never quite the same after the great storm of 1987). On the back of the picture was a price and the artist’s address, Oakley Studios, Upper Cheyne Row. Well that kind of explains all the pictures I had found. Battersea Park was just a pleasant stroll away From Oakley Street. Oakley Studios sounds like the kind of secluded close where a young artist might live. I couldn’t find it on the 1935 OS map (we don’t have that particular sheet) but here it is on the 1894-96 series. 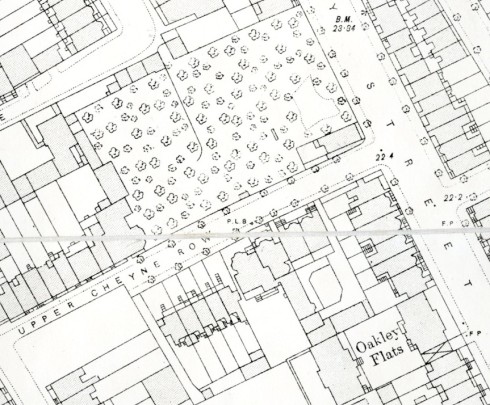 Oakley Studios is the little cul-de-sac just north of Oakley Flats I think (or were the Flats another name for the Studios?). You can also see Cheyne House itself and its grounds, where Dr Phene built “The Mystery House”.  A bit more on that later. The building eventually converted into the Nursery in Glebe Place is also visible.

First, the entry for Oakley Studios in Kelly’s Directory of Chelsea.

Seven studios. Three of the residents describe themselves as artists,including Miss Juliet N Williams ,and all but one are women. (The possible exception being the enigmatic  B. Foulkes Winks or Winks B Foulkes). This proximity possibly explains Juliet’s interest in the gates, which would have been very close to her residence.

I’m assuming Juliet’s gate pictures were painted in the 1920s. After Dr Phene’s death, stories about him proliferated. One of our scrapbooks has several pages of newspaper cuttings about him and his collection of curious objects.

This is Cheyne House, a relatively innocuous 18th century dwelling.

While this is the “Mystery House” in all its weirdness, on the corner of Oakley Street.

Imagine the garden between them filled with antique statuary.

The papers worked themselves up with conflicting stories about the house and the collection: “Nightmare in a Chelsea Garden” , “Weird relics of a Chelsea recluse.” to quote just two headlines.

So you can imagine plenty of local interest, even after the collection was sold off (by the “executrix”).

The site cleared as required by the new lease. The pink area shows the whole property.

After the sale the walls and the gates may have been were all that was left to contain the mystery, although this night view looks strange enough.

Juliet thankfully donated the record of her obsession to the Library (also just round the corner from Upper Cheyne Row. And she moved on, possibly to Reading, possibly to Sussex. (She stayed at Oakley Studios until 1935.) 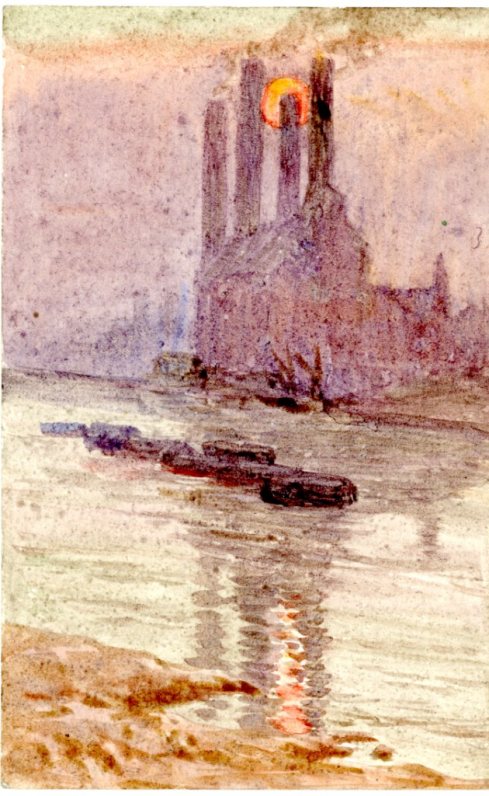 A view of Lots Road power station painted on a plain postcard. The reverse has a message for her mother, possibly.

I’ve kept the spring picture of the gates back till the end. It’s my favourite.

It seems to hold the promise of a secret garden, isolated from the surrounding world, in which a young artist might wander and find..well anything you like really, depending on your own imagination.

I’m not promising a return to regular posts just yet because you really never know when serious work and serious events are going to interfere with the blogging life but I have several ideas bubbling up at the moment so let’s keep our fingers crossed. A belated happy new year to you all. And from Juliet Williams:

Dr Phene in his garden

So there he is. Dr Phene in his garden. A neatly dressed elderly man with a flamboyant beard. Dr Phene was a minor celebrity in his own time. He is still famous in a small way. A local eccentric who collected artworks from all over the world. A poor man’s Sir John Soane if you want to be cruel.

He built a famous house which he never lived in. Shall we look at the house?

The house is as famous as the man. Stories abound about Dr Phene and his house. His wife or his fiancé died and the wedding breakfast, already laid out was preserved untouched in the house just like Miss Havisham’s. I’m glad to say this is not true. A woman to whom he was engaged died of a rheumatic fever but that was many years before he built the house. He later married his cousin Margaretta. Some say the marriage soon failed others that it lasted for some time before Margaretta left and went to live in Paris. He did name a street after her though – Margaretta Terrace.

Another story told about Dr Phene is that Queen Victoria came to see the new houses he was building off Oakley Street and was pleased enough with them to say he could name the new street after her, but he declined as he had already promised the name to his wife. If this is true it sounds quite a daring thing to do. He may have made up for the slight later by writing a long narrative poem: “Victoria Queen of Albion – an idyll of the world’s advance in her life and reign” published in 1897. (I have a copy of the book here with me but I’m going to spare you any quotations from this work. It doesn’t make much sense to me even with the explanatory footnotes and illustrations.)

It’s also true that Dr Phene never actually lived in the house but he and his friends seem to have spent time in it, long enough to have created among other features a mortuary for cats within its walls. Or would that be another apocryphal story? The house is described as being in the style of a French chateau or an Italian palazzo depending on the source and either way as a celebration of Dr Phene’s rich and varied ancestry. He is said to have avoided completing the building because of a dispute over the rates with the Chelsea Vestry, which is a dull enough explanation to be plausible, but perhaps he simply never got around to finishing it. He had another house nearby in Oakley Street which wasn’t exactly conventional in appearance either. 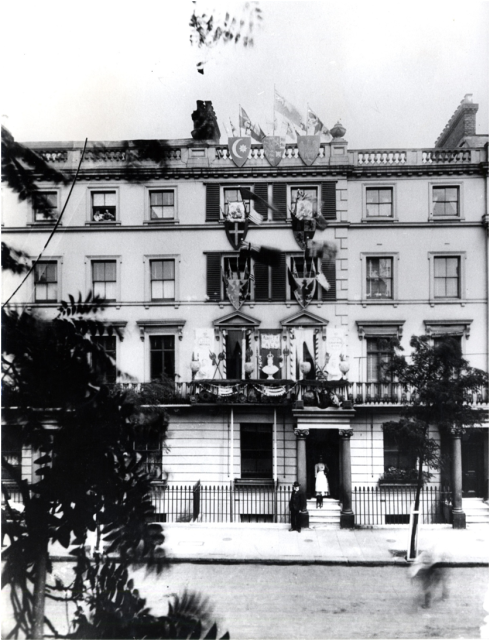 I love the composition of this photograph. Dr Phene, Dr Phene’s dog, Dr Phene’s maid posing for another illustration of his eccentricity.

For the record then, Dr John Samuel  Phene: a traveller, a collector, a scholar, a poet, a recluse (who nevertheless seems to have had many friends), a property developer. An innovator in architecture and planning, he was the first person to think of planting trees in streets but also perhaps a lover of decay. The famous house was on the corner of Oakley Street and Upper Cheyne Row. It was built in the grounds of the literally crumbling eighteenth century mansion Cheyne House. The garden was overgrown and unkempt except where Dr Phene had carved out a section for the display of his collection of sculptures.

I think these two photos, probably taken after Dr Phene’s death, demonstrate the sheer strangeness of the house and garden better than any number of stories. And the depth of Phene’s obsession with collecting exotic objects. That is still real long after the rumours have been forgotten.

The garden and its contents are looking a little the worse for wear. Perhaps this was at the time of the sale of the house. The building itself continued to stand empty until its demolition in the 1920s.

I haven’t exhausted the mine of contradictory stories about Dr Phene. The photographs tell their own story. I always come back to the first picture: Dr Phene in his garden. Aloof, diffident but quietly satisfied with his efforts and the persona he has created.

But I can’t help adding one more picture, one more mystery. Here is Dr Phene in a more sociable setting on a charabanc tour in 1860.

I think he’s the man on the far left with the casual pose and the already impressive moustache. But he could be deceiving me.