Thomas Hosmer Shepherd is one of the few artists in our collection who seemed equally happy in Chelsea and Kensington. It could be argued that his Chelsea watercolours have the edge for the variety of the subject matter, although some of these views are familiar from the work of other artists. Take Gough House as an example.

We’ve seen it before in the paintings of Mariane Rush. She painted Gough House from different angles, even from old prints and her imagination. Shepherd’s view is more exact, his trees less exotic, but he does allow a certain darkness about the place. Gough House was built in 1704 but the Gough family didn’t own it until ten years later. It lay adjacent to the later building Walpole House – susequent researchers wish that Shepherd (or Rush) had painted that.  In 1790 Gough House was a girl’s school (inevitably) . The grounds were gradually absorbed in the 19th century by the building of the Embankment and the laying out of Tite Street but the house itself partly survived into the 20th century as The Victoria Hospital for Children

The Chelsea Bun House in Grosvenor Row was the home of the Chelsea Bun but also had a museum of curiosities, not the only one in the area.

The Bun House was run by several members of a family named Hand. The often quoted figure of a quarter of a million buns sold on Good Friday 1829 is probably apocryphal but the buns themselves “a zephyr in taste, fragrant as honey” sound  a little more interesting than the modern version.

Below, a view of St Joseph’s Convent, Cadogan Street occupied then by the Sisters of Mercy. Boys and girls’ schools and alms housas were later added and the street now also has a Catholic Church, St Mary’s.

Some of this building still survives. Another building with ecclesiastical connnections is now gone, Winchester House, home of the Bishop of Winchester after the destruction of Winchester Palace. While the Bishop lived there it was outside the jurisdiction of the Bishop of London, but by 1825 Earl Cadogan’s estate had acquired it. After its demolition, Oakley Street was built, running south from the King’s Road to the river right through the former house. 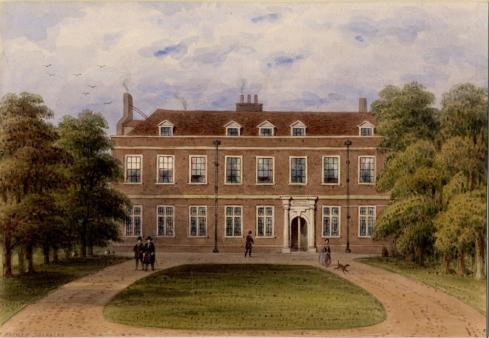 Some clerical figures strolling on the left perhaps, and one of Shepherd’s running dogs on the other path.

East of the point where Oakley Street met the river was a grand terrace of houses we’ve seen in Hedderly photographs. The house with the signs is Don Saltero’s Tavern,  once home to an even more famous museum of curiosites. 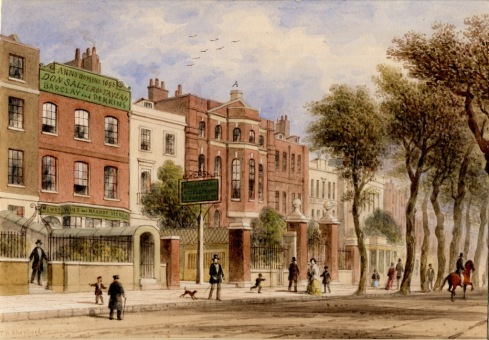 James Salter (“Don Saltero” was his exotic alter ego) had been a servant of Sir Hans Sloane. The original coffee house was further east near Lawrence Street but he finally moved to 18 Cheyne Walk. He died in 1728. The collection was sold in 1799 and by the time Shepherd painted this picture the house was just a tavern.

The collection itself deserves a post of its own, which I may do one day but let me just give some random examples from the 1734 version of the catalogue:

As you can see, it was a collection you’d want to see if you could. I once displayed the whole list in the gallery at Chelsea Library. In the end though the whole lot sold for £50.

We now begin a walk along the riverside, one of the most illustrated parts of Chelsea [link]

Another familiar view shows the pre-Embankment riverside heading towards the Old Church. The river was wider, and maybe gentler at this time.

Getting closer to the church you can see the Sloane Monument and the terrace leading up to it, both photographed by Hedderly. (plus other posts under his name) 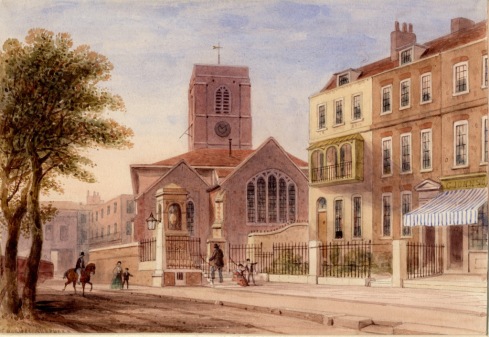 Shepherd gave the dog some time off and puts a horse in this one. Arch House, the covered way to Lombard Street is just visible.

On the other side of the bridge, the dog returns in this view of Lindsey House, built in 1694 but substantially altered over the years. The Brunels, father and son lived there for several years in the early 19th century. 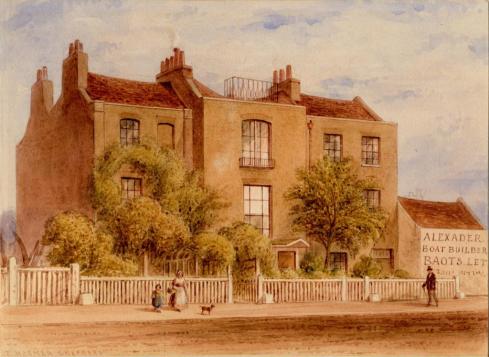 Further along Cheyne Walk at number 119 (the house in the centre) was rented from 1838 by the painter J M W Turner. The rail on the roof was supposedly the point from which he watched the river, particularly at sunset.  He lived there almost incognito only visited by a few friends such as Leopold Martin, son of the painter John Martin. It’s not recorded whether the misspellings at Alexander’s are what Shepherd actually saw or whether Shepherd himself was a poor speller.

Time-journeys along this stretch of river often end here:

The Cremorne Pleasure Gardens, where I imagine there were no dogs allowed, apart from the performing variety [link]

Shepherd doesn’t show the crowds. Perhaps he’s imagining a quiet afternoon at Cremorne. These two ladies, the gentleman and the boy can have their pick of the chairs. A few figures make their way out of what I assume is Ashburnham Hall, part of the old estate now convereted into an exhibition area.. This is the genteel version of the Gardens. Some edifying displays in the hall, a chance to sit quietly, almost in the country with only the sound of the wind in the trees and the river in the background. Later the entertainments will begin and presumably Cremorne won’t be so quiet or so staid.

Let’s go one step further and pass through the gardens onto the westernmost stretch of the King’s Road. St Mark’s College was built right across from the entrance to Cremorne. As a teacher training college the authorities there naturally deplored the licentious activity in the evenings at Cremorne and the Principal of the College was one of the main objectors whenever Cremorne’s licences were up for renewal. (Although the main reason for the closure of Cremorne was probably a decline in profitability and the desire of developers to build housing on the site.) The days of seasonal  outdoors entertainment on the scale of Cremorne were coming to an end.

On the Fulham Road side of the College site was the chapel:

It looks like another tranquil spot. But London was growing around all the quiet places Shepherd depicted and the modern city was taking over. The only animals in this picture are a small flock of birds.

Shepherd brings together many strands of Chelsea history. I’m almost certainly going to pick one of those up next week, I’m not sure which one right now.