Christmas Days: In the Studio

This year I spent a little time doing some research at Chelsea Library in bound copies of the Studio magazine from the early 1900s. As well as finding what I was looking for I also came across a number of pictures which were both unfamiliar and fascinating. The pictures in in today’s post are a selection of the images that appealed to me, beginning with one of young artists at work.

This view of a corridor at Glasgow School of Art was one of a group showing students working on pictures. They’ve obviously been told to act natural but the two closest to us can’t resist looking at the camera.

Below, a drawing by Arthur Rackham. In the past I’ve said how Rackham often places faeries and other supernatural beings in the world of insects and pests. This is an example.

The Rescue – the rescuers are not much larger than insects as they are seen pulling a fly out of a spider’s web. Perhaps the spider preys on faeries too.

The picture below by Alberto Martini is even more grotesque.

A group of villagers discover the remains of a man pulling a wagon (or was he tied to it?), caught in the night and frozen to death.

A rather more pleasant image:

The cello player, a drawing by C H Shannon. A group of young women musicians literally lying around. Their dresses are billowed out around them creating a continuous surface which they are half-absorbed into. It reminds me, inevitably perhaps, of the inner image on a LP’s gatefold sleeve. The pencil technique makes the scene fuzzy and langorous. I would like to see this recreated with a modern band. (I’d also like to see the picture coloured in, which would be relaxing for someone.)

The picture below by J R Weguelin reminded me of Charles Conder. In a villa by a lagoon another group of women relax while a maid covers them in veils, presumably to protect them for the heat of the sun. 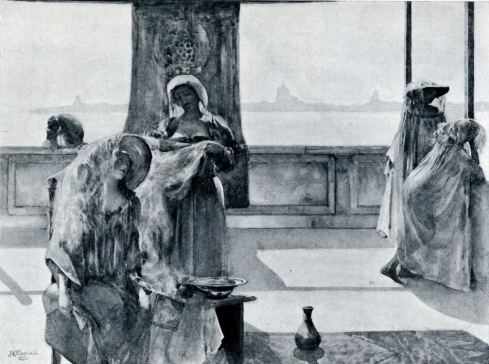 I can feel the sense of heat in the air and the sleepy postures of the women.

The Studio also featured architectural drawings like this one by Dan Gibson and TH Mawson.

Finally a picture distinctly reminiscent for me of the work of Aubrey Beardsley. 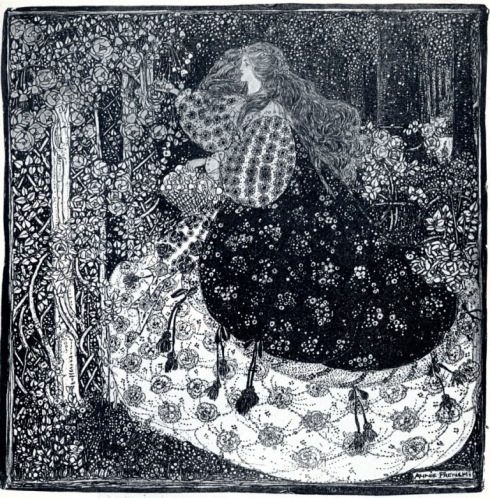 The artist, Annie French was a student at GSA, one of the so called “Glasgow girls”. The GSA’s website has a number of pictures of students at work. There is one showing Annie French herself, which brings us back to where we began. I don’t know  if any of the women in the corridor was Miss French.

I hope these picture fit with an atmosphere of stillness as Christmas Day arrives and some of the frantic activity is done.

Today’s soft toy greeting is another Japanese character. From the Studio Ghibli animation the gentle and mysterious My Neighbour Totoro, that engaging character the many legged Cat Bus seen here in many sizes. A Happy Christmas from the hybrid creature.

And all the characters featured on the blog. See you tomorrow.