The Chelsea painter – on the waterfront

Earlier this year, I spent some time in our archive rooms assisting a photographer who was taking pictures of the oil paintings in our Local Studies collection. He was working for the Public Catalogue Foundation (www.thepcf.org.uk ) a registered charity which has been working to create an online catalogue of all the oil paintings in public ownership in the UK. To this end their agents have been visiting institutions all over the country, making lists and taking photographs. They have visited museums, art galleries, educational establishments, hospitals and of course libraries. They’ve been working in collaboration with the BBC’s Your Paintings project and you can see the results on the PCF website and at www.bbc.co.uk/arts/yourpaintings .

But for me and you and the blog the main result of all this work is that I now have some good digital images of artworks I haven’t been able to photograph or scan myself. I’m going to do a couple of posts featuring some of the paintings. This week the paintings are all from the Chelsea collection. Just as with the Chelsea artists I’ve featured in previous posts, for the painters here the quintessential Chelsea subject is the river.

This is a picture of the riverside at Chelsea looking from the Battersea shore painted by James Webb in the 1880s.  You can see the principal landmark Chelsea Old Church, the old Battersea Bridge and just visible in the distance the towers of Albert Bridge. The painting hangs high up on a staircase chained into position and has probably been there since 1905.  Some good lighting has brought out details which I had never seen before like these: 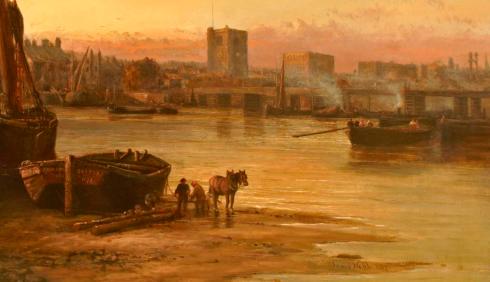 You can just about read the name of the barge in the foreground. The number and size of the barges show you that this is a working river.

More than a century earlier Thomas Priest painted this picture:

The sky is lighter, the boats are smaller, the Battersea shore is more rural. It’s the same church. There was originally a cupola on the tower which was removed in the 1820s when the “new” church St Luke’s was built. The tower is also visible in the picture below, by an unknown painter. 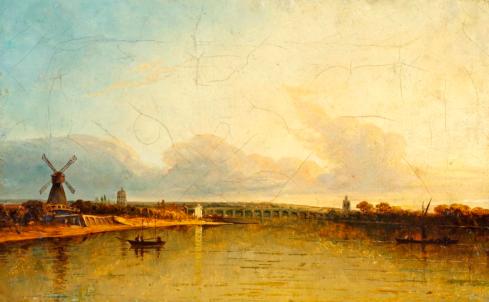 Here you can see an even quieter day on the river. There really was a windmill on the south shore in the eighteenth century. I can’t say for sure what the building to the right of it is though. It looks like a warm lazy day. Before the embankment and the development on both banks the river was wider and may have flowed slower, or so it looks from our time.

This is the Chelsea bank at high tide. I think the bridge in the background is Chelsea Bridge, the old one which looked a little like Hammersmith Bridge. Just to the left of centre is the curious bent structure (a chimney?) of the Old Swan, an ancient Chelsea tavern much loved by artists.  Here it is again in a painting by Edward A Alkyns showing a barge being unloaded with raw materials for the brew house and some men swimming in the river. 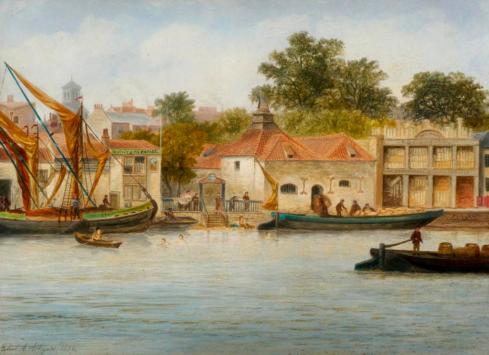 The next picture of the Old Swan is by one of Chelsea’s most famous artists, Walter Greaves.

It shows a livery barge passing the Old Swan with a crowd gathered to see it go by. This may be a depiction of famous river race for barges, Doggett’s Coat and Badge. The Old Swan would have been the finishing point for the race at this time. The Greaves family had a boatyard further down the river which we’ve seen in the posts about James Hedderly and W W Burgess.

Going west past the Old Swan was the Magpie and Stump. Here the river ran close to Cheyne Walk and at high tide was only a few feet from the street.

This atmospheric  picture is by George Lambert.

Further west you came to Lindsay Wharf where the Greaves family worked and where Walter painted this picture called “Unloading the barge”. This is one of his best paintings.

It’s one of those pictures where Greaves leaves behind all the touches of the amateur painter and creates a work as good as any of the artists who have painted Chelsea. St Mary’s Church, Battersea where William Blake was married is is visible across the river.

Finally this week, my single favourite painting in the collection, another view of the river and Cheyne Walk. This one is by Henry Pether.

Pether was one of a family of painters of that name. His father Sebastian and his grandfather Abraham were all fond of night time scenes. This one, “Cheyne Walk by moonlight” captures the still evening atmosphere of old Chelsea. Two lonely figures pass the dark houses and shops and the river laps against the moored barges.  This is a hard picture to photograph. The colour of the original is hard to capture but this version comes the closest yet. With the full moon over our heads it’s a good moment to leave the Chelsea painters.

Thanks to the Public Catalogue Foundation and particularly to Dr Rosie Macarthur.