You’ve got another blog extra this week, something I shall do occasionally for slighty tangential subjects.

When I wrote about Frances Burney’s Evelina a couple of weeks ago I mentioned a book I’d looked at by a lady named Josephine Kamm – Fanny Burney: a story biography (Methuen 1966). The book was a narrative about Fanny’s life posibly intended for readers of school age. Mrs Kamm wrote a number of educational books and stories for young adults.

Like the 1903 Evelina, Kamm’s book was illustrated by an artist in this case someone named Biro. Truth be told the illustrations are not in the same league as Hugh Thomson, by a long way, but they did have a certain nostalgic quality for me. They reminded me of the sort of pictures you used to see in children’s books and encyclopedias, and magazines like Look and Learn which we used to have when I was a bookish kid back in the stone age. I expect it was a whole lot cheaper to hire a professional artist to create new illustrations for a book than it was to source and pay for existing artwork, especially if you were aiming at a younger audience.

I almost included one of the pictures in the Evelina post, but that was long enough already and the Biro pictures would have suffered in the comparison. Biro was not a great illustrator in my opinion but the pictures do fit well with the text and there is that nostalgic interest in the way books used to look, which I thought was worth sharing with you in a blog extra, as plenty of people have looked at the Evelina post. 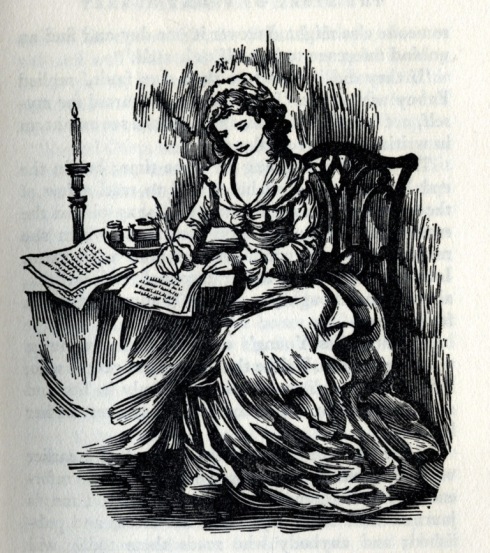 Fanny writing in her journal having narrowly avoided being forbidden to keep one by her father and stepmother. (I’ve read the relevant section to make sure I’ve got this correct. If I was using my just look at the pictures method I would have made this one Fanny writing Evelina in secret by candle light).

As one of Hugh Thomson’s illustrations for Evelina was coloured in a later edition, I have arranged for some of Biro’s to be coloured so they look even more like those in the books of my younger days. 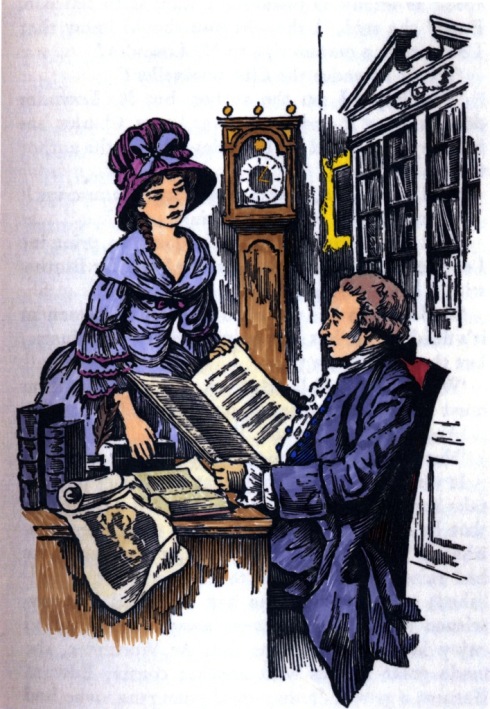 Fanny and her father. She has just confessed to having the found a publisher for Evelina. Biro gives her a peeved expression – her father was not that interested at the time. He liked it a lot more later.

Here Fanny sits in the grounds at Chessington reading Evelina to Mr Crisp, a family friend. 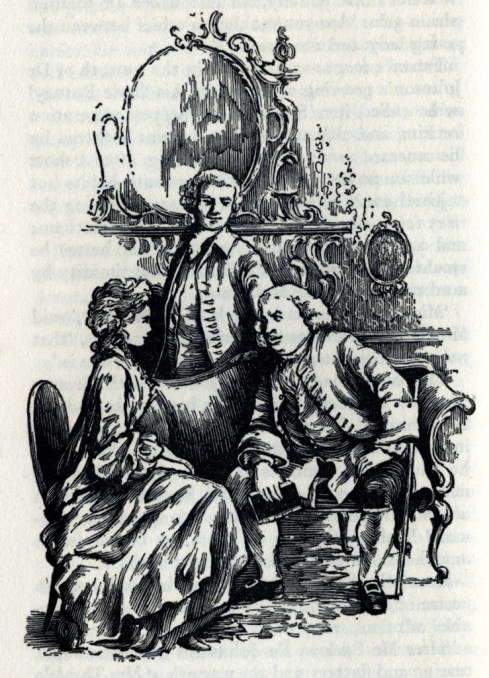 Fanny and Dr Johnson. What every author needs – an eminent fan.

“Miss Burney looks so meek and is so quiet” said Mrs Thrale, that no-one would suspect what a comical girl she is.” “Oh she’s a toad! ! cried Dr Johnson with a hearty laugh, ” a sly young rogue with her Smiths and her Brangtons!” (Two sets of comic characters in the book)

After her identity as the author of Evelina is discovered Fanny  becomes famous. After the publication of her second novel Cecilia Fanny’s portrait is painted by her cousin Edward. Compare Fanny’s pose with the engraving based on the portrait in the Evelina post. 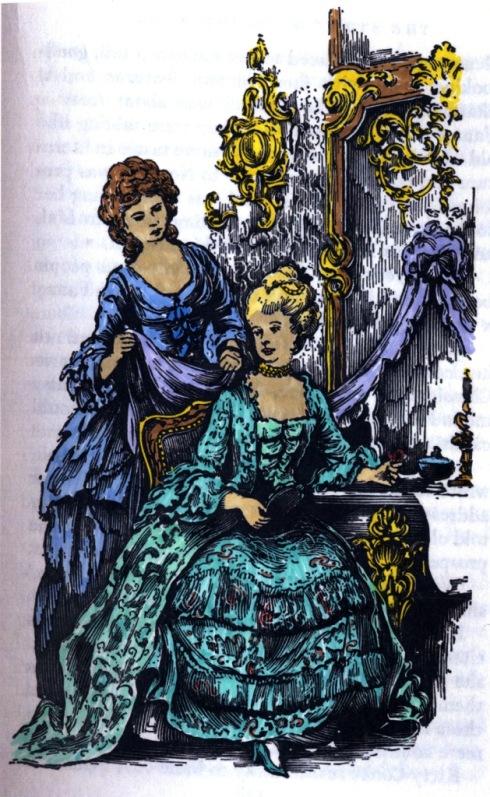 Fanny and Queen Charlotte. This is her last night in the Queen’s household, where she had not been happy. But the two of them are momentarily overcome by emotion.

The reunion with her husband Alexandre D’Arblay in in France in 1801. The coach journey has an anecdote about an old woman travelling with Fanny who is smuggling clothes into France by the method of wearing many layers of them underneath a hooped skirt.

Going off on another tangent I remember reading a post by a style blogger who overcame baggage restrictions in a similar way on a flight from Sweden to the UK. ( This is the link:  http://flyingsaucer.typepad.com/flyingsaucer/2010/04/saying-goodbye-to-sweden.html ) (Have any readers ever done this? I should add that I hadn’t looked at this blog for years and that the author has made some improvements since 2010)

Fanny and the Queen again in 1817. Although the Queen and General D’Arblay seem to have aged, Fanny is still depicted as a fashionable young woman, as sometimes seems to happen in screen adaptations. Mrs Kamm doesn’t deal with Fanny’s later life, or the famous medical procedure she undertook in France. (For understandable reasons probably).

So although it’s not an extensive set of images like Thomson’s, Fanny is the heroine in another graphic story. I hope you found the contrast interesting. the 1903 Evelina was obviously a more upmarket work, but Josphine Kamm and Biro did their work too.

The colouring was done by my wife Cathryn who has been colouring in as a hobby for several years, well before they started calling it art therapy. My thanks to her for bringing those childhood books back to life. I was tempted to have all the pictures in colour but I thought I should give the unimproved Biro a chance as well.

Make a comparison for yourself: 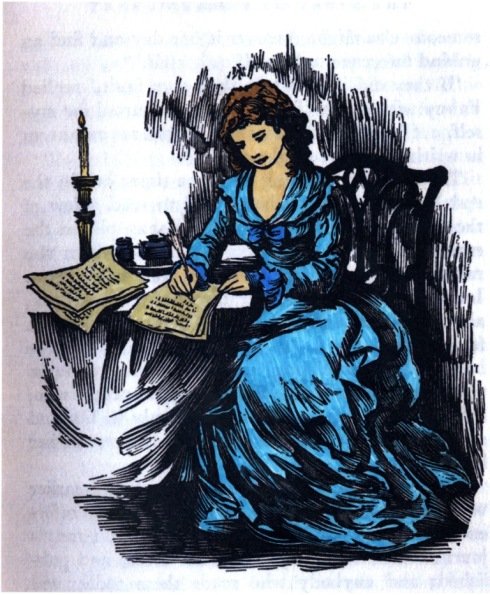 This week’s regular post will be published on Thursday but possibly not till the afternoon as I have to touch base with our guest blogger.