Side streets of Chelsea: part two

We took a look at the Cross Keys in part one, and I was pleased to hear it would be opening again. So let’s start with another look at it down one of the side streets of Chelsea, Lordship Place.

All the pictures this week are glimpses of the places behind the well known thoroughfares, the back streets, the short cuts, the hidden alleys and openings or the odd buildings you somehow failed to notice. Like this one:

Two views of the Danvers Street garage, the only business on a mostly residential street at one time. Did I walk past the sign offering lubrication myself when I lived nearby or had it gone by then? The other sign “Chauffeur driven hire” looks unconvincing now, slightly dodgy in fact. It might have come from an episode of Minder.

This is another possible location for a seventies TV drama:

Imagine one of those quirky detectives peering out from that balcony off Radnor Walk wondering where the missing girl has gone.

Here is another atmospheric alley bearing the name of a famous local resident, Joubert Studios.

The detective has just gone into one of the mews style houses.

The other theme this week is cars parked on narrow streets.

That’s Danube Street again. I like the rear view of those houses, the jumble of flat roofs and railings. It wouldn’t have been much of a view but on a sunny day you could sit out in the open and look down on that Vauxhall Victor. (Am I right, car experts?)

This is Paradise Walk, a salubrious residential street today like most of the side streets of Chelsea but back in 1974 this set of commercial buildings look like they were only recently adapted for residential use. The tall building in the distance is still there, but now has a glass door and an entry phone.

Royal Hospital Road is an enclave far enough from the King’s Road to support a few shops. Oakeshotts was a chain of grocery shops you used to see all over London. This one is now a Tesco Express. Let’s move on back towards the main drag.

I don’t suppose this view has changed much since 1974, but it does have the still quality of that time as the photographer, John Rogers caught a moment when there was virtually no traffic.

Nearby John paused to get a picture of this ornamental fountain in Wellington Square where Aleister Crowley lived briefly in the 1930s.

On the northern side of the King’s Road, Blacklands Terrace named after Blacklands Farm. 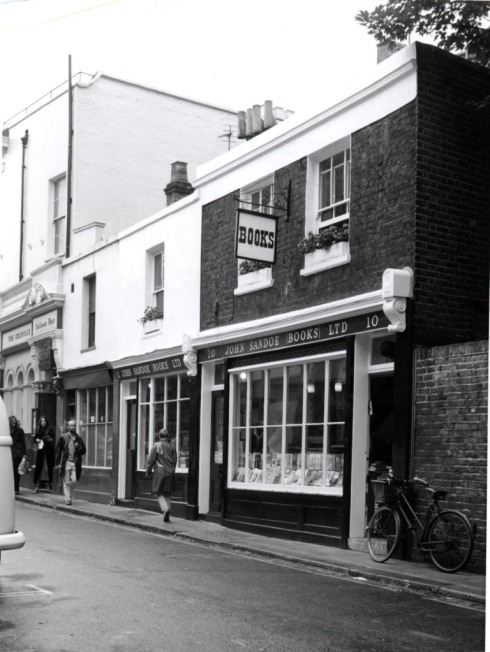 The John Sandoe  bookshop has been a Chelsea institution for many years. According to rumour Dirk Bogarde used to go there to sell review copies of books. A couple of typical seventies people emerging not from the shop but the pub next door.

An otherwise dull view enlivened by the woman standing in her doorway peering at something we can’t see. 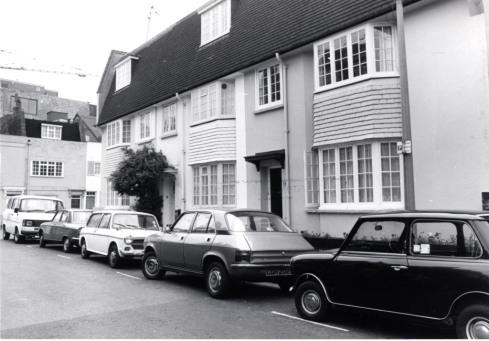 In Burnsall Street, an Austin Allegro, perhaps one of the worst cars British Leyland ever made. I cleaned a great many of them at Mamos Motors in Soho. This was the period when Ford were in the ascendant and it was slightly surprising that Leyland continued to sell cars

Despite all the Allegros, Marinas and Princesses I had a good time during my brief spell in the motor trade. London was full of surprising places to see even in the most obscure streets, like this last picture of an odd turret in Jubilee Place.

We’ll be back for a part three, but not for a while. I’m not sure what’s coming next week but it will be quite different from idyllic Chelsea in the 1970s. Thanks to everyone for their best wishes for my health. I’ll try and stay out of trouble.