You have been here before. You have stood on this foreshore, seen those beached barges waiting for the next tide. You’ve walked those streets. But the last time you were looking through the eyes of the photographer, an artist who worked through light falling on a glass plate. This week you’re seeing the scenes below through the imagination of a man who worked with pencil and ink, and by scratching lines on a sheet of metal. Just as William Cowen created a rural idyll in the area between Kensington and Chelsea (Idle days in southern Kensington – see list of posts opposite) so Walter William Burgess created an urban fantasy out of what he saw in Chelsea in the second half of the 19th century.

Here is Lindsey Wharf again, the barges with their sails furled and the men walking on the mud up to the stairs.

Back on solid ground this is Lindsey Row looking west echoing the view we saw in the Hedderly post Tales of the Riverbank.

The tide is in and there seems to be more activity in the street. To me it looks like an afternoon scene. Smoke from the chimneys and people on their way home. That same horse and cart waiting in the first picture are now on their way. The sky is full of clouds, birds are on the wing. The guys from Green’s boatyard have moved a tricky job out into the street.

Past the bridge in Cheyne Walk the high tide touches the road.

A milkmaid heads towards the Old Church. Two men with time on their hands relax and talk just feet from the water. This picture has the feel of an earlier period than the others, perhaps the 1830s or 1840s when Chelsea was still half rural full of market gardens and nurseries. Burgess has slipped us into a time machine of his own.

We’re moving away from the waterfront now. This is Justice Walk. The Wesleyan Chapel building is still there even that strange cage like structure over the basement yard. The building has also  a court house been a wine merchant’s house. The street may take its name from a resident of nearby Lawrence Street the famous magistrate and founder of the Bow Street Runners Sir John Fielding. A story persists that it has a tunnel in the cellar which leads to the river. Chelsea has quite a few of those rumoured hidden passages. Very few of them can be found today. 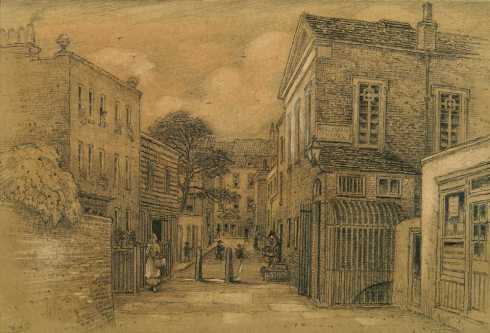 I used to walk through this alley every evening on the way home from work. it’s quiet, tranquil rather than spooky although I once saw two of the modern equivalents of the Runners in action there. I can’t say more than that here.

Now we’re looking south down Old Church Street. There are cafes, shops, houses. A woman I think I should recognize from a Hedderly photograph walks with her son. Some other children are playing with hoops. Hoops are a bit of a craze in Burgess pictures. It looks like another late afternoon. The hint of growing shadows, more smoke in the air.

Burgess’s Chelsea has secret places too behind the public streets.

The Moravian burial ground. If you remember this patch of green has been used in our century for exercising a lion. But it has obviously always welcomed animals. Who is the figure in black on the path? 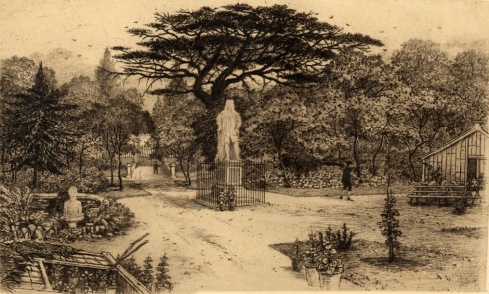 I’m not good with botany but I know that’s a cedar tree looming over the Sloane statue. In our archive room there is a cedar box made from wood from this garden. A couple of potted plants sit in front of Sloane like some kind of offering. At the left another stone deity stands surrounded by plants.  From the Physic Garden you can move on to the Royal Hospital. In the picture below two Pensioners have left the Hospital to stroll up Franklin’s Row. It’s one of my favourite Burgess pictures.

It’s the sheep that make the picture for me. But go back and look through these pictures again. You’ll find animals in every one. Horses, chickens, dogs and cats. The goat. If he couldn’t insert four legged creatures Burgess made do with birds. He couldn’t keep the animals out. Perhaps it was part of urban life in those days. Even in the city we shared our space with them. Is there an unknown animal among the exotic plants in the Physic Garden? WWB might know for sure.

Walter William Burgess lived from 1845 to 1908. Very little is known about his life but given the time he was in Chelsea it wouldn’t be unreasonable to think that he knew Hedderly, the Greaves brothers and maybe Whistler as well. Many of Burgess’s pictures are collected in a folio volume called Bits of Old Chelsea.