I’ve been having trouble with the post I was going to do this week. I had the pictures I wanted to use but I couldn’t find the right way to write about them. I came into work on a Saturday and while I was waiting for the computer to finish the things it likes to do when I log in the cursor alighted on a folder of pictures by John Bignell, a not quite random selection of images which showed people doing various forms of work. So almost immediately I decided not to force the other post into existence but to let Bignell take the reins. We haven’t had a Bignell post for a while so why ever not?

As always with Bignell he moves from the world of art and artists in which he had many friends to a more ordinary world of shops and street stalls where he appeared to be equally welcome. Here is the sculptor, Loris Rey at work in his studio in 1959. 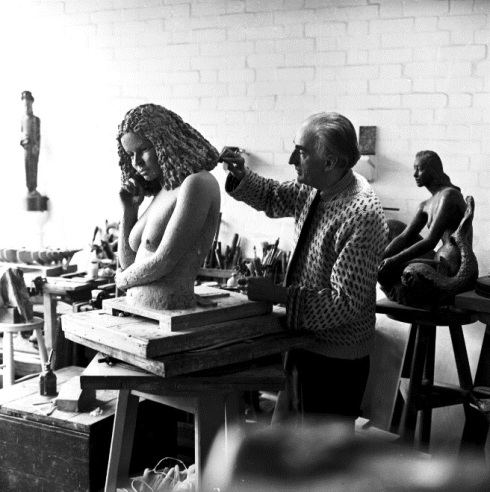 We’re lucky to know the date of that picture. In others you have to infer from the picture itself when it might have been taken. In this case the late 1950s or early 1960s is as close as you can get. 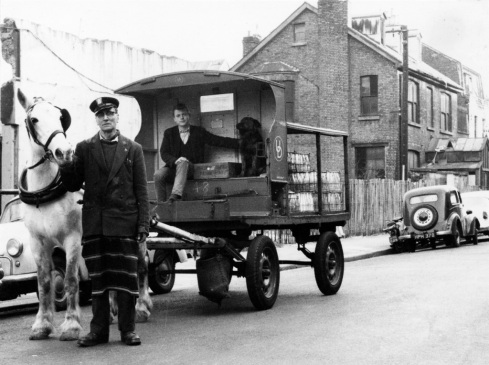 An old school  milk float with a perky horse pulling milk, a man and a dog. You can imagine Bignell wandering the streets setting up pictures like that as he came across people he might have known, or struck up an acquaintance with, but on other occasions it looks like he was invited.

Everything looks clean and modern in this picture but it has an undeniably period feel to it. It’s sparse compared to a modern operating theatre.

Back on the streets, a rare colour picture taken in the old World’s End area.

Sea food al fresco. The St John’s Church Hall visible in the back ground and the green grocer’s stall we’ve seen before.

This is another street stall much further east along the King’s Road. 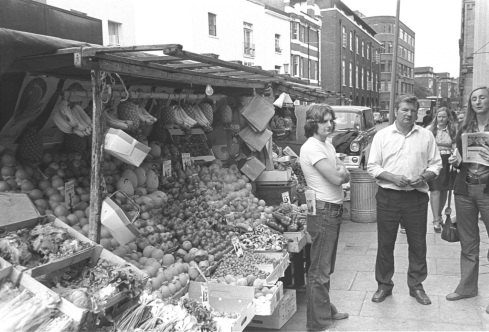 The three people posing for the picture look eminently recognizable (if anyone knows them?)

Not far away from that location, a flower stall.

Thank you Madam, says Bignell. The lady herself is clearly not quite sure what he’s doing, and why she’s in the picture.

And Loris Rey works on something else. 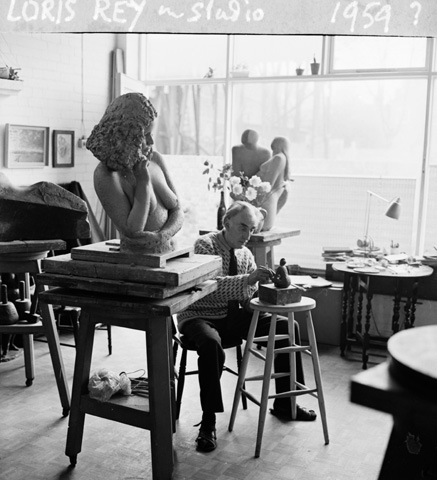 Here is a shop which is possibly devoted to Japanese goods, complete with a kimono-clad member of staff.

Bignell was forever popping into art shops and small galleries. 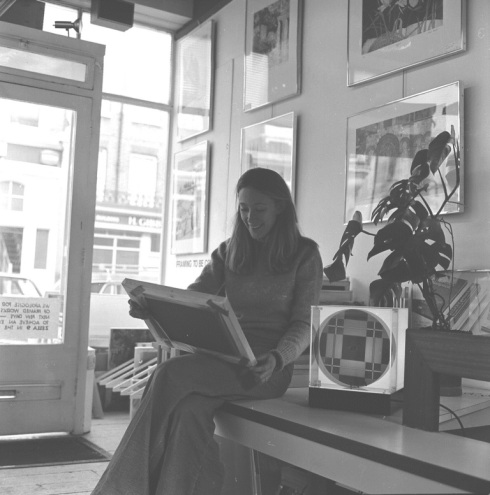 Framing work done here. Half a notice on the subject is visible in the door.

Art supplies available here. The picture below may be at Green and Stone, the long established shop on the King’s Road.

Bignell was in  butchers.

A 1970s look to that picture – the woman’s hair (and the guy with his back to us whose hair is getting good in the back as Frank Zappa used to say). And see the slogan – “Go to work on an egg”.

More hair in this picture where Bignell looks in a a barbers (“well groomed hair”).

And a classy looking florists.

The Pottery. Anyone remember that one?

Bignell even looked at used car lots. This one was where the new fire station on the corner of Dovehouse Street was built.

Finally, some actors at work.

I wonder what she made of it all?

I know sometimes a Bignell post can seem like a random selection, but there’s always something interesting there, even in the most throwaway  sort of pictures.

Note the little figure of the girl in leg braces, a charity coin box, in the background. Those used to be everywhere. The two women are crossing to the south side of the King’s Road possibly near Glebe Place (E A Fownes is now My Old Dutch).

Have fun identifying some of these locations.

Next week there will be another guest blogger for Halloween so I make no guarantee about factual accuracy.