Very few  stretches of motorway have any kind of cultural significance  outside their own locality. You might cite the M25 whose psychological and geographical resonance was investigated at book length by Iain Sinclair. When you’re thinking of new roads in west London generally, J G Ballard’s work might come to mind. There must be others. But none of them are quite as resonant as the Westway, that stretch of road which bisected north Kensington in the late 1960s.

I wrote a piece about the new landscape created by the motorway earlier this year, and afterwards one of my readers sent me some scans of pictures he owned. I knew I would use them on the blog one day and as I was looking through them last week I thought they would make a good contrast with the rather decorative images you’ve seen in the last few weeks. As the man who writes the words I often look for an angle when I select pictures for a post. But these images don’t require much in the way of commentary. They come with a built-in set of impressions and ideas. Obviously I won’t be able to stop myself adding a few words….. 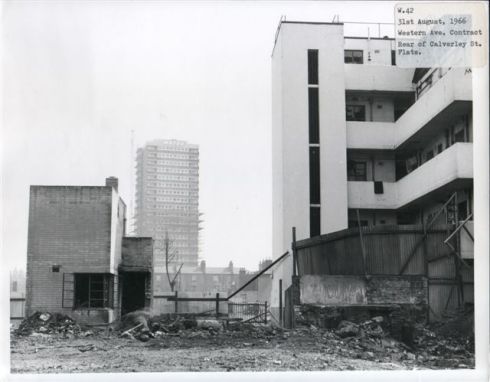 Normally I crop images and straighten them out before putting them up but with these I think it looks better if you see them as I first saw them, with their typed or hand written captions. The pictures look like they come from an album put together by a contractor as a record of their firm’s work. You can see something similar here in a post about Chelsea Bridge. Before digital cameras and data storage this was common practice on big construction jobs. Equally commonly images like this end up being lost or destroyed.

1966 was the year of demolition. Streets were cleared, and areas of derelict land expanded, revealing the detritus of urban living or just providing a place among the churned mud and rubble for all kinds of abandoned stuff to accumulate.

In the background the houses and housing blocks look like they’re half concealed behind a layer of mist. (That may be the weather of course, or the photographs themselves).

Abandoned vehicles look like discarded toys. Below, a pair of cars look like they are sinking in a sea of tires, barely corralled behind a fence.

Behind another corrugated iron fence one of the few people visible in these pictures, a surveyor working for the main contractor. 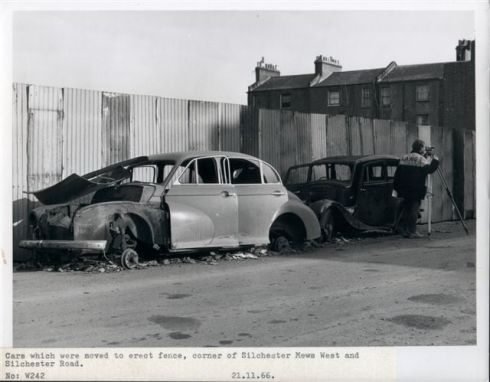 The cars below look stranded as if by a sudden subsidence. 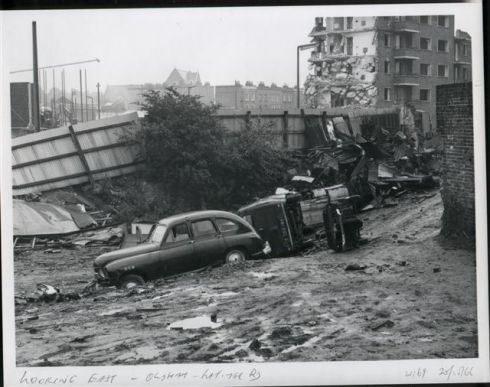 Behind them the fence is collapsing and  you can see a partially demolished  or crumbling building.

Below a group of boys find a quiet spot for exploration and play near a railway footbridge.

Some semblance of order has been imposed as a site is prepared for clearance.

By 1967 this process continues as some of the demolition sites were ready for construction. 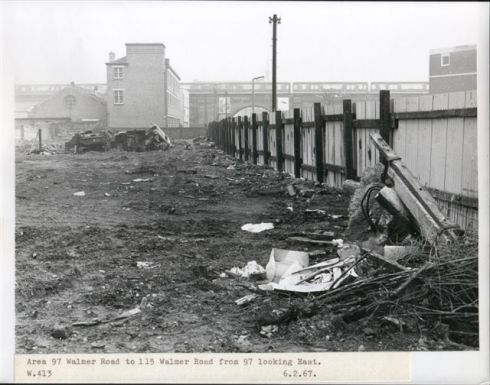 In the background a Metropolitan Line train passes over the empty scene.

Below the first signs of the road construction to come, with two column bases. 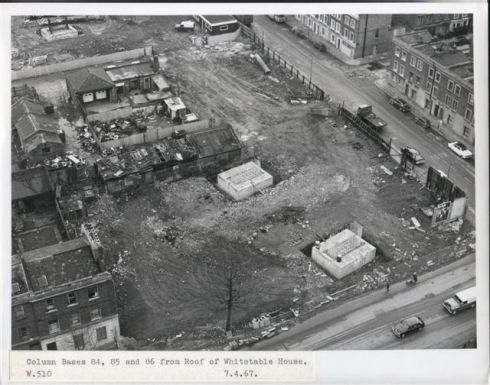 Several photos were taken from this vantage point on Whitstable House as the work progressed. The photo above was taken in April 1967.

The one below is from December:

A smoke or dust cloud rises from the ground on the right of the picture like steam.

Further west the road is starting to take shape. 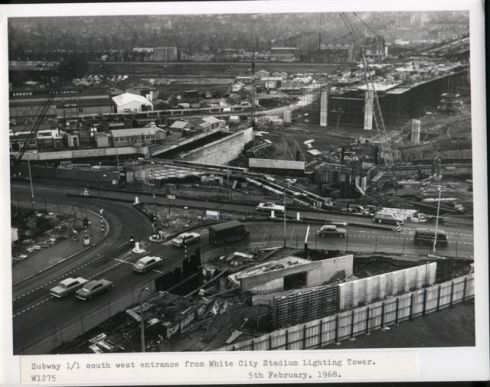 Here is the view from Whitstable House four months after the previous picture: 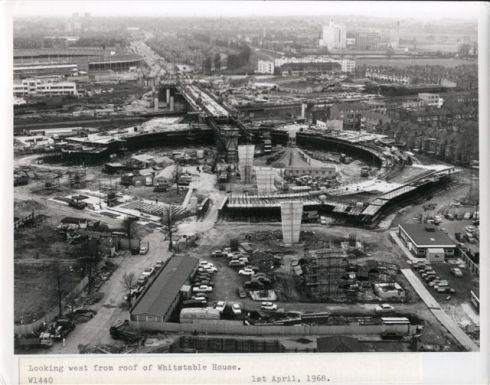 Progress was steady rather than rapid . This view from February 1969 shows how close the emerging road was to housing that was still in full use: 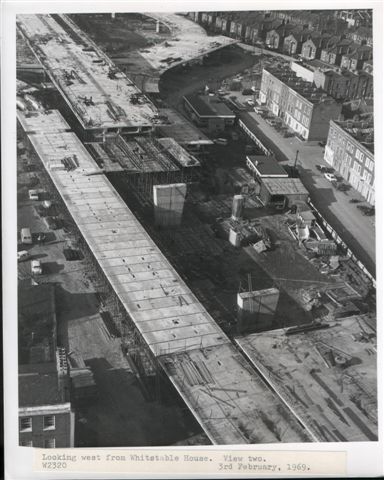 There are no pictures  from 1970 in the set so there is a sudden jump to the completed motorway which looks clean and empty.

The last image was taken early in 1971. It takes us back to the beginning of Walmer Road, now separated from the rest of the street.

The Latimer Arms which used to sit at the start of Walmer Road, now also isolated.

The Westway was about to become a physical and psychological feature of North Kensington and of London in general. There were many positive aspects to it as an advance in the transport infrastructure of west London. These pictures show how it began as a kind of scar on the urban landscape of the area, unavoidable perhaps but undeniably traumatic.

My thanks to the reader who sent me these pictures, for which I am very grateful.